An Exposition of the Epistle of James

Chapter 1:18, Born Again With The Word of Truth

James has been speaking about temptations: how we must consider them, how we must endure them through the, wisdom of God which is acquired by fervent prayer, of the fact that we may rejoice in them because by them God molds our faith into perfection. In the immediately preceding context (vss. 13-17) James emphasized that when we fall into sin as a result of temptations we must not blame God. We are drawn away and enticed by our own lusts which bring forth sin, and sin when it is finished brings forth death. God cannot be tempted with evil, neither tempteth He any man: for He is the Father of the lights, with Whom is no variableness neither shadow of turning. God is the giver of every good and perfect gift. Continuing in that vein, James now speaks of the good and perfect gift of God, regeneration.

In the past (not so much today because people generally are ignorant of the doctrines of the Word of God and do not care to know them) a good deal of controversy swirled about this and similar texts of scripture. The controversy had to do with the question as to how regeneration is effected. Some said the new birth is mediate; that is, it happens through the means of the preaching of the Word; while others said regeneration is immediate; that is, it occurs apart from means and is the initial work of the Holy Spirit in the heart of the elect. This latter is our position. (The interested reader is referred to a thorough discussion of this whole matter by Rev. Herman Hoeksema in his Reformed Dogmatics, the section on Soteriology.)

That the wonder of regeneration is immediate is evident when we take note of the terms involved in this text and others. The word in the text, “begat he us,” means literally “to give birth to.” The point is that life prior to birth is presupposed. This word is used always in the New Testament to refer to birth from the womb. In .other words the term refers to life coming to consciousness. Now, a different word is used by Jesus in His conversation with Nicodemus as recorded in John 3. Jesus says in verse 3: “Verily, verily, I say unto thee, Except a man be born again, he cannot see the kingdom of God.” The words “born again” refer to the moment of conception, the very beginning of life in the womb. This is precisely how Nicodemus took what Jesus had said. He responds (vs. 4), “How can a man be born when he is old? Can he enter a second time into his mother’s womb and be born?” Jesus then explains that he speaks of a birth of “water and of the Spirit” (vs. 5). The same word used in John 3:3 is also found in that beautiful passage, I Peter 1:23-25. Here the Scriptures speak of “being born again out of incorruptible seed by the living and abiding word.” Out of that incorruptible seed life is conceived. That’s the work of the Holy Spirit of Jesus Christ, the living and abiding—that is, the eternal Word, It happens beneath the consciousness of the elect, in earliest infancy or perhaps even at the moment of conception. That new, heavenly, resurrection life of Christ, which cannot die and apart from which one cannot even see the Kingdom of God, is brought to consciousness by means of the preaching of the Word. “And this is the word which by the gospel is preached unto you.” (I Peter 1:25).

It is in that broad sense that James speaks of regeneration in this verse. The seed of life has already been implanted in our hearts; and having willed it, the Father of lights causes that principle of life to be born (come to conscious expression) by means of the word of truth. That the inspired James means by the Word of the truth the preaching of the Word is clear not only by comparing of Scripture with Scripture, which we have done, but also by the succeeding context of this verse, which speaks of “receiving the Word with meekness and being “doers of the Word and not hearers only.” Putting it all together, the idea is that God by means of the Word of truth gives birth to the life of Christ in us, calls us out of darkness into His marvelous light, unites us to Christ by means of faith so that we daily put off the old and put on the new man, justifies us, sanctifies, preserves, and glorifies us.

What is the “word of truth” by which this wonder is effected? The truth is reality over against that which is unreal, the lie. Truth, therefore, is always the faithful presentation of reality over against the lie; and that too, with respect to all things: God, Christ, the Church, the world, the past, present, and future. That means God is the truth. He reveals Himself as “a God of truth” (Deut. 32:4). He is the eternal reality Who is before all things, the Creator, Sustainer of all things. And the truth of God, Father, Son, and Holy Spirit, is revealed in Jesus Christ. Christ is the WORD which was in the beginning, which was with God, and which is God. He is the Word by whom all things were made and for whom all things were made, and in whom all things consist. That Word became flesh and “dwelt among us, and we beheld his glory, the glory as of the only begotten of the Father, full of grace and truth.” (John 1:1-14—cf. also Col. 1) The truth in all its fulness is revealedin Jesus Christ, the Son of the triune God in the flesh. He is the reality of all the types and shadows of the Old Testament, and He is the reality over against all that is contrary to God. “For the law was given by Moses, but grace and truth came by Jesus Christ. No man hath seen God at any time; the only begotten Son, which is in the bosom of the Father, he hath declared him. (John 1:17, 18) Christ said it Himself in those familiar but profound words: “I am the way, the truth, and the life . . .” (John 14:6). The Holy Spirit is the truth. As the Spirit given to Christ, promised by Christ and poured out into the church by Christ, He is the Spirit of Truth Who comforts us by bringing to our remembrance all that Christ spoke. (John 14:16, 17, 26; John 16:13-15)

That truth, that Word of truth spoken by God in the Son and by the Holy Spirit we have in the Bible. The times in which we live require a word or two about this. The Bible is the TRUTH. It is God-breathed, given by inspiration. (II Tim. 3:16) It is the product of God in Christ through His Holy Spirit, “Holy men spake as moved by the Holy Spirit.” (II Peter 1:20, 21). This means that the Bible is not in any sense the words of men except inthe sense that God prepared from eternity men whom He used by the Holy Spirit as instruments through whom His Word was to be spoken and written. The Bible then is not a book that witnesses to the truth; nor is it a record of man’s religious experience or encounter with God. The Bible, is the Word of God and therefore the Truth. It is the whole truth, to which nothing may be added and from which nothing may be subtracted. It is the truth about everything; it presents all of reality in its proper perspective. And, there is no truth apart from the Holy Scriptures. Anything apart from the Scriptures has to be the product of the creature; and because the creature is fallen and totally depraved, what he produces will always be the lie. By its own testimony the Scriptures are that. That means the nature and extent of Biblical authority is most emphatically not a question. It’s not open for discussion. One either by the grace of the Holy Spirit of Jesus Christ believes the Bible to be the Word of Truth; or lacking the testimony of the Spirit in his heart, he rejects the Word of truth in unbelief. Here there can be absolutely no compromise. One does not stand above the Bible to determine what is the Word of God in it and what is not. One must approach the Bible in the faith that it is the absolute truth of God Himself.

By that Word of truth God has caused us to be born initially by implanting the incorruptible seed of the resurrection life of Jesus Christ by the Spirit of Christ. And by the preaching of that Word of truth God brings that principle of life, that seed, to conscious expression; for this living and abiding Word is “the word which by the gospel is preached unto you.” (I Peter 1:25) This is the miracle of preaching. The world may call that “foolishness,” let us never. For unto us which are saved it is Christ, the power and wisdom of God which destroys the wisdom of this world. (cf. I Cor. 1) It is to the saved the almighty power of God which awakens within them the knowledge of their sin and sinful natures, leads to godly sorrow and daily repentance, assures of peace and forgiveness, instructs, edifies, feeds and nourishes their hungry and thirsty souls, and keeps them from falling. This is what happens wherever the Word of truth is preached faithfully in and by God’s church.

The text states, finally, the beautiful purpose of our being born with the Word of truth: “in order that we should be a kind of firstfruits of his created things.” This is an Old Testament figure. At the beginning of the harvest season Israel had to bring the Firstfruits of the harvest to the tabernacle (temple) before the Lord. This was symbolic of two things: 1) by bringing the firstfruits the pious Israelite declared that the harvest was the Lord’s, he consecrated the fruit of the earth to the Lord: 2) at the same time he declared by this act that God would give the complete harvest. James says we are firstfruits of his created things. Just as the entire creation fell under the curse through the fall of Adam (Gen. 3) so the entire creation shares in the redemption of the elect race (cf. Gen. 9:8-17, Romans 8:19 ff.). Out of the fire of God’s wrath which will destroy the present, cursed creation (II Peter 3) God will create a new heavens and a new earth, a perfected, redeemed creation in which the elect in Christ will reign to the glory of God forever (Rev. 4; Rev. 6:12-17; Rev. 7:9-17; Rev. 21, 22).

That is the gospel of redemption. That is the victory. May the Church of Jesus Christ preach then boldly, joyfully, and without shame the gospel. To the world that is sheer foolishness. To the saved it is indeed Christ the power and wisdom of God which destroys the world. 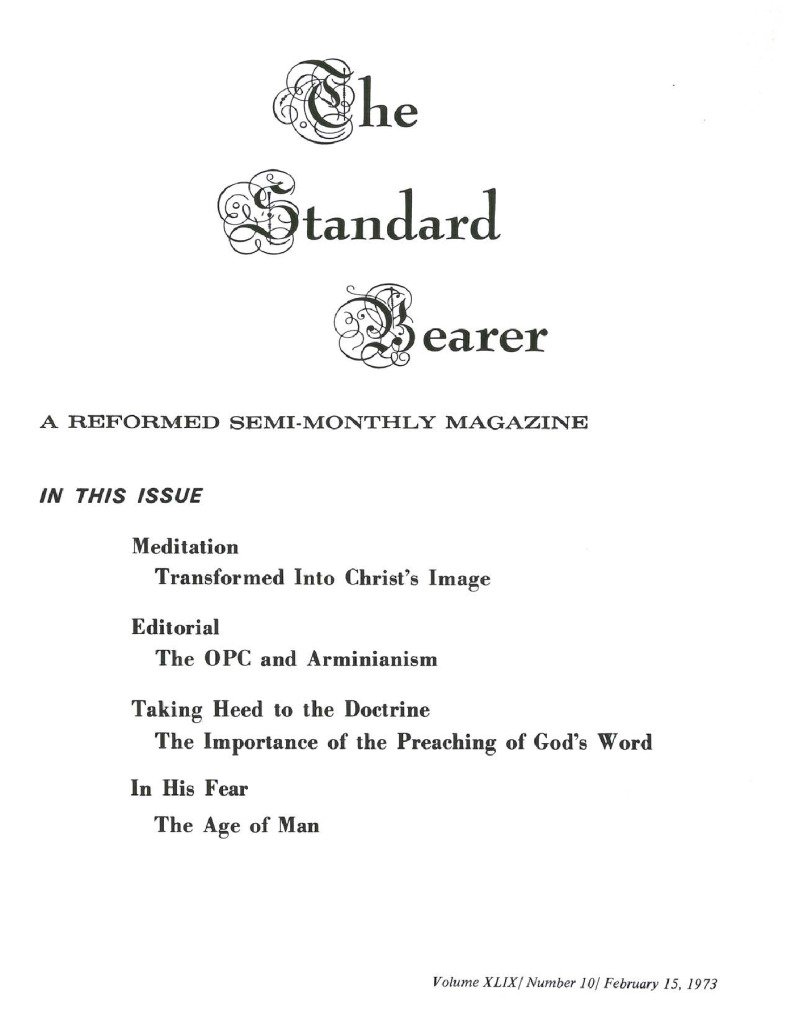