That the Free Reformed Churches (FRC), Heritage Reformed Churches (HRC), and Protestant Reformed Churches (PRC) are joining efforts to revise our Psalter, members of the PRC and readers of the Standard Bearer already know. In the March 1, 2016 issue of the SB, Prof. B. Gritters explained that Synod 2015 instructed the Contact Committee to bring a well-grounded proposal to Synod 2016 regarding Psalter revision, and to appoint three men to serve on an interim committee to begin the work. Prof. Gritters also reviewed the history that brought us to this point, noting that the PRC’s concerns regarding the Psalter’s faithfulness to Scripture, doctrinal purity, and musical renditions date back to the 1940s.

But why, and how, and according to which principles is this revision taking place? Taking a hiatus from treating the office of elder, I will devote several articles in the rubric “Ministering to the Saints” to explain these matters.

My primary goal is to inform. I understand that not every member of our denomination appreciates synod’s decision to continue the project. Some question the necessity of Psalter revision; others are afraid that the revision will not include their favorite Psalter numbers; perhaps some even have fears that the PRC is slipping, pointing to other denominations whose efforts to revise their song book were symptoms of doctrinal apostasy.

Providing information will not remove every concern or objection regarding the work. But it should help all understand why the work is going on, and see that the work of Psalter revision is motivated by a desire to be faithful to God’s Word. This is true of all three denominations involved in the work. Although the FRC, HRC, and PRC have their differences, all have in common a commitment to be faithful to Scripture, a desire to worship God in a way that pleases Him, and a love for the Psalter.

As Synod 2015 mandated it to do, the Committee for Contact with Other Churches (CC) brought recommendations to Synod 2016 on the basis of several well-developed grounds. Synod decided to “continue in their participation in the interdenominational project of Psalter revision, and mandate the CC to carry out this work through its committee,” which is Prof. B. Gritters, Mr. Joshua Hoekstra, and Rev. D. Kuiper. Synod also adopted the committee’s significant grounds.

Then Synod adopted a process by which it would approve the work being done. To our Synod 2017 the Psalter Revision Committee will explain its suggested changes.2 Synod will evaluate that work, and express any objections to the interdenominational committee. The Psalter Revision Committee will then inform our Synod 2018 regarding how it has responded to the concerns of Synod 2017.

Furthermore, Synod 2016 spoke to the committee’s work up to this point. The committee submitted its evaluation of Psalter numbers 201-243 to the three synods and showed what revisions of these numbers it will be recommending. The work on this section is largely, but not completely, finished. First, trained eyes must view the work to find mistakes in it.3 Second, the Genevan Psalter numbers (found in our “Chorale section”) that are based on these Psalms must still be reviewed. The synods of the FRC and HRC approved the work done so far. The synod of the PRC expressed “a concern that the scope of the revision has become too broad,” on the basis of two grounds:

The three PRC men on the committee understand Synod’s concerns and conveyed and explained them to the rest of the interdenominational committee at our recent face-to-face meeting in September. The following comments will help the reader better understand what the committee is doing.

Regarding the tunes, the statistic of 33% (16 of 47) is alarming at first glance. Although Synod desires to revise and improve our Psalter, it also desires that the revised Psalter be familiar. All can appreciate that. If 33% of the tunes are changed, will we recognize it as a revision of our current Psalter, or think of it as virtually a new songbook?

I want the reader to understand that if a future Synod adopts the proposed revisions in full, our revised Psalter will be familiar—very familiar, not barely so.

Of the 47 first and second tunes which make up Psalter numbers 201-243, the Psalter Revision Committee suggests replacing six of them. Not the words, but the tunes, would be replaced. Most of these tunes will be familiar. Of the six suggested replacements, one is the tune to Psalter number 185. Two are familiar hymn tunes, “The King of Love My Shepherd Is” and “Praise, My Soul, the King of Heaven.” A fourth tune will be familiar to some, not all. It is the tune “O Liebe Meiner Liebe,” used with the hymn “Hours and Days and Years and Ages. . .,” which is selection 474 in the 1959 CRC Psalter Hymnal. The other two tunes will probably be unfamiliar to PRC members initially.

The Psalter Revision Committee is also recommending to move or remove ten tunes. I hope in a future article to explain why we would recommend moving or removing tunes. For now, note that the committee considers some of these tunes to be not well suited for edifying congregational singing, so that it proposes removing them entirely. Examples are the second tune of 212 and the tune of 219. Other tunes the committee deems good in themselves but not needed in their current location. It proposes moving them to another song (the second tune of 234 is being suggested as the melody to a new, second versification of Psalm 88) or is putting them in the “parking lot” for later use if needed (the second tune of 201). Again, in every instance in which the tune is removed, the lyrics (words) will be retained. The words of 219 are already found in 218, and the words of second tunes are always found in first tunes. Other lyrics will be combined with the tune just before or after that Psalter number.

The last two paragraphs have explained the statistic of tunes in the current Psalter that would be replaced, moved, or removed: “33%—16 of 47.”

After one more comment, I’ll give a different statistic.

In addition to the replacing of six tunes and the moving or removing of ten, the suggested revision includes two new tunes. Our Psalter has only one versification of Psalm 82. It is proposed to add a second versification—the tune and words of selection 157 in the 1959 CRC Psalter Hymnal. And Psalter number 243 (currently 19 stanzas) is being divided into two songs; the proposed tune of the second is the tune to the hymn “If Thou but Suffer God to Guide Thee.”

Here is the different statistic. Apart from the Genevan selections, the proposed revision of Psalms 73-89 includes 41 selections. The tunes of 34 of these 41 se selections are current Psalter tunes. That is 83%! Of the remaining 17% (7 tunes), at least two will probably be unfamiliar, possibly two will be somewhat familiar, and perhaps three will be very familiar to most members of the PRC.

Synod also expressed concern that “the lyrics of the Psalter are being altered and at times substituted for no compelling reason.”

Here are the statistics.

The Psalter Revision Committee informed the three denominational synods that, “of the 268 stanzas reviewed, 86% remain unchanged (though some were moved/copied to different tunes); 6% had changes to minimize archaisms; 2% had modifications to make them more accurate to the Psalm; and 6% are new lyrics.”4

I am not ready to give a percentage of words changed, but bear in mind that a change to a stanza is not a change to all the words in the stanza. In other words, if 86% of stanzas are unchanged, then a far greater percentage of words are unchanged. What our people will find most unfamiliar about the lyrics are the eighteen new stanzas added to present a more complete rendition of the Psalm than our current Psalter gives.

This means that our project, to this point, is on target with what Synod 2015 was told, and what the men said who attended the meeting to explore the possibility of working together to revise the Psalter:

The aim will not be to produce a new book of Psalms but to improve the existing Psalter in a way that makes it clearer, more accurate, and singable. This could mean a revision of 15-20% of the current Psalter. Meeting [that is, the committee] agrees that a revision effort should take care to preserve the essence of the current Psalter so that the revision is recognized as an improved version of the Psalter of 1912.5

Inherent in the very work of Psalter revision is the fact that our people will have to become familiar with the end product. But the committee will not bring a song book with completely new lyrics, tunes, and songs; we do not even envision one in which the people find 33% of the tunes or stanzas unfamiliar. We want our people to recognize that the revised Psalter is a revision, not a re placement, of our current Psalter. This was the intent of the men who attended an exploratory meeting in January 2015, which desired “the establishment of a committee that would operate. . .in pursuit of accuracy, completeness, clarity, singability, avoidance of redundancy, and connecting the selection number with the psalm number.”6 And this is the goal of the committee that has now been established: “Our goal is to make the best possible Psalter for our churches, keeping it familiar in worship, as well as increasing the connection to the biblical Psalms, and increasing the singability and usability for worship.”7

2 The committee has the ambitious goal of covering by next year all the Psalter numbers based on Psalms 1-89 (Psalters 1-243, 414-422, and 437-442). Because the version of the Psalter used by the Free Reformed Churches and Heritage Reformed Churches includes Psalters 435-450, the committee will review these numbers and decide whether to recommend including some or all of them in the revised Psalter. That some will be included is likely.

3 The entire Psalter, music as well as lyrics, is being retypeset using Finale music notation software. Inevitably, those entering the music will make mistakes. Ideally, these mistakes will be corrected before the revised Psalter would be presented for approval. 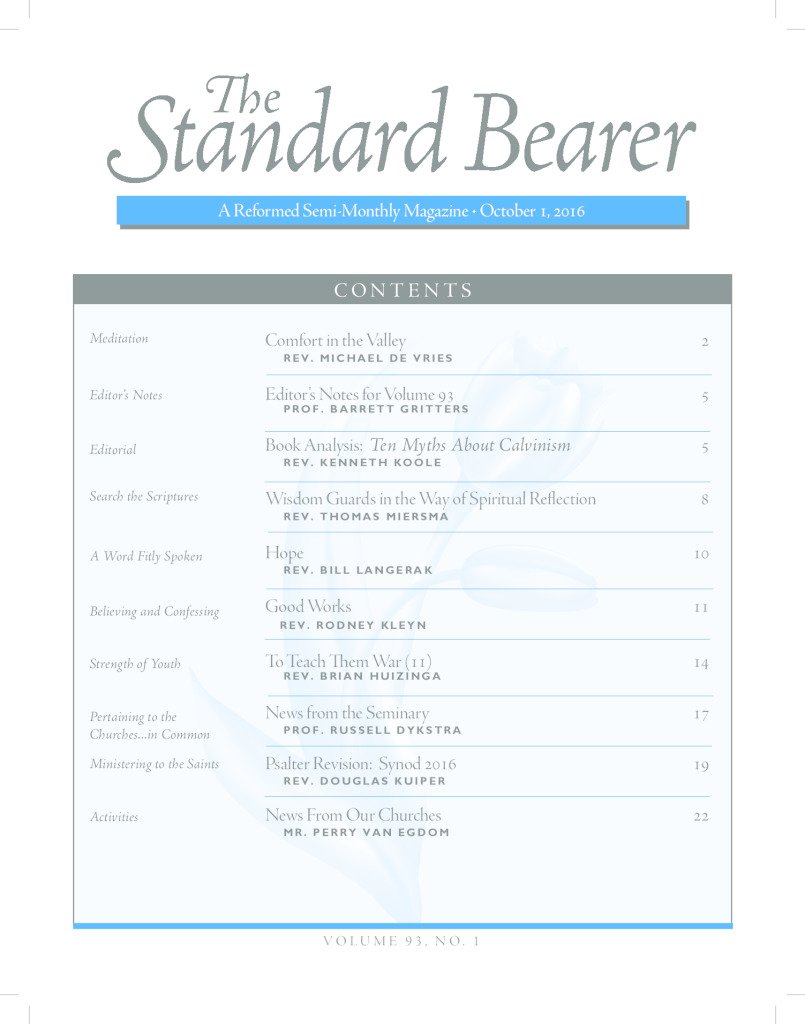