In my last two articles I developed three reasons why the interdenominational committee is proposing changes to some of the music (tunes) of our Psalter: 1) the tunes must serve the lyrics well; 2) the tunes must serve the congregation by enabling her to sing the lyrics well; and 3) some Psalter numbers are rarely sung, raising the question whether a change of music would serve the congregations well. Although I developed these reasons, I did not invent them. One reason why some initially explored the idea of Psalter revision was the recognition that “some tunes are difficult to sing due to their range or simply the nature of the tune.”1 When the PRC Synod approved the PRC’s participation in the project, it did so recognizing that “not every tune is appropriate to the content of the Psalm” and “some tunes need to be re-pitched/re-keyed.”2

The principles regarding music

The principles governing our evaluation of the music of the Psalter are these:3

Music. We affirm the desire to sing excellent music in the Psalter. It is then the purpose of the committee to review the general quality of the music of the Psalter. It was noted that the Psalter should be designed for congregational (not choral) singing, while maintaining a range of simple to more complex tunes.

The general quality of the music/tunes will be considered along the following criteria:

1) Is the tune too difficult? Does it have too wide a range, inconsistent or difficult rhythms, awkward leaps, etc?

3) Is the music suited for the text to which it has been assigned?

4) Does the music call undue attention to itself?

5) Does the music or tune have inappropriate associations?

6) Is the music pitched too high? Would this selection sound better in another key?

Again, the general quality of the music must be considered in relation to what is already familiar, and will be revised only if the music of worship would be stronger because of these changes.

Implementing principles 1 and 6, the committee is proposing to revise or replace difficult tunes. Some tunes are not well known, possibly because they are “difficult” tunes: Psalter 180 may well be a case in point. But “difficult” tunes also include some that are well known and sung regularly, but are pitched too high, have too wide a range (for example, the lowest soprano note is a middle C and the highest is a high F), have awkward leaps (when one note is followed by a note that is about an octave or more higher than the previous), or have difficult rhythms.

Applying principle 1, the committee proposes to remove the notation to “ritard” (“slow down;” Psalter 220, for example) in most, if not all, instances. Often the music does not warrant a ritard, and if the words in one stanza do warrant slowing down, the words in the other stanzas do not necessarily call for a slower pace at the same point in the song.

Psalter 206 is an instance of a song with an awkward leap. In the soprano line, the fifth note is an A, and the next note is a middle C. (I am referring to the notes that accompany the syllables “we ren-”). In the next line of music, the third note is an A, followed by an E (“Thy won-”). Although the song was written as it currently appears in our Psalter, the downward leap from A to middle C seems unnatural, especially in light of the downward move from A to E in the next line. Often our people, perhaps without realizing it, sing the soprano middle C as an E. The committee recommends raising the soprano and alto in the first line of music to an E (soprano) and middle C (alto).

In keeping with principle 6, several tunes are being lowered a half or whole step. Many of these tunes had at least one high F in the soprano. Others, even if not having a high F, had a long sequence of notes in a high range (see the soprano notes above “mercy to me afford” in stanza one of Psalter 235). In other instances the committee judged that a different key was more fitting to the lyrics or the emotions expressed in the song.

An inevitable consequence of a lowered tune is that, if the soprano note is lowered, so are the alto, tenor, and bass notes. Before deciding to recommend lowering a key signature, the committee asks what effect this will have on these other parts.

Implementing principles 2, 4, and 5, the committee is asking whether a tune is appropriate for congregational singing.

Because our Psalter is primarily intended for congregational singing, rather than singing by a choir, the committee desires every tune to have complete harmonization for all four parts. I am not now speaking of instances in which the song combines the soprano and alto notes, or the tenor and bass notes (the tenor and bass of Psalter 45, for example). Rather, I am speaking of tunes in which one of the four parts has rests, while the others are to sing (the bass in the third system of Psalter 31, tenor and bass in the first four measures of Psalter 204, second tune; Psalters 219 and 226, and others). This is one reason why the committee is not recommending to use the second tune of Psalter 204 and the tunes to Psalter 219 and 226. It is possible, though not certain, that the committee will recommend fully harmonizing some tunes—Psalter 190, for example.

Some harmonies, although written out fully, are still not conducive to congregational singing. For this reason, the committee proposes replacing the tune to Psalter 205. Also, although the committee has not yet begun to treat Psalters 244-413, it will evaluate the tune to Psalter 254 with this in mind. The tune is popular, at least in the PRC, but its harmonization is such that it requires a trained group of singers to sing the harmony well.

Not uncommonly, before a tune was set to a Psalter arrangement, it had been set to secular music or Christmas music. The committee evaluates whether this makes the tune less appropriate for congregational singing (principle 5). Several examples can be given. The second tune of Psalter 212 is “Auld Lang Syne.” Perhaps the association of that tune with a song commonly sung in bars is not as great today as it has been in the past, but this association is one reason why the committee proposes eliminating that tune. Another tune that is recommended for replacement is “Materna” (Psalter 126), which is the tune to “America the Beautiful.” Several Psalter tunes are set to Christmas carols. Initially, the committee was inclined to replace all such tunes, but this remains a point of discussion within the committee. Without being able to tell you what the outcome will be in the various instances, I can tell you that the committee evaluates each Christmas carol tune with this in mind.

The fact that a tune is set to other words is not in itself a reason to replace the tune. But the committee asks the question whether the association that is formed in our minds by using the tune of a popular hymn or other song makes the tune preferable for our use or not.

Evaluating the relationship of tune to text requires a good understanding of the emotions that the psalmist conveys in the psalm, and a good sense of how music affects our moods and emotions. Some might consider these points to be entirely subjective—what one or another thinks. Without doubt, there is a measure of subjectivity. However, those who study the psalms and who understand music can come to conclusions about these matters that are not merely subjective. And many minds are helpful at this point: even on the committee, some have a better sense of these matters than others and, after hearing the input of all, we make a decision together.

Perhaps the classic example of this is Psalter 136. “Dust to dust, the mortal dies,” we sing, as the tune has us constantly moving. In the hymn “Watchman, tell us of the night,” the tune’s movements suggest the desire that the questioner is anxious to know the matter, and perhaps that he desires the watchman to be alert, to give the answer as soon as he can. But “dust to dust, the mortal dies,” while constituting a warning to God’s people, is better sung to a tune that is more somber than that of Psalter 136.

The current tune to Psalter 205 has a lilt to it; its rhythm, as well as a wide range of jumps from lower to higher note and down again, indicates that. However, Psalm 74 is an expression of profound grief because of the judgments that God has sent on Israel. The tune and text do not match. Psalter 209 is another instance of a cry of grief on the part of the child of God. Although the tune to Psalter 209 is simpler and easier than that of Psalter 205, the tune does not inherently fit the mood of the lyrics. In some instances—Psalter 209 being one of them—the tune that is proposed for replacement is in a minor key, rather than major key, in order better to convey the emotion of the Psalm.

This brings to an end my explanation of the principles that the committee is using in reviewing our Psalter and recommending changes. In future articles, the Lord willing, I will present case studies showing how the committee has applied the principles regarding text, music, and format to specific Psalter numbers.

I conclude with restating what I said when I began these articles: my purpose has been to demonstrate that the revision committee is consciously asking the right questions and striving to find good answers to these questions. Evaluating music and poetry is inherently subjective; one likes this better, and another likes that. It follows that deciding whether any tune or set of lyrics should be revised is also at least partly subjective. However, the committee is doing its work according to these principles in order to minimize the subjectiveness of the work. 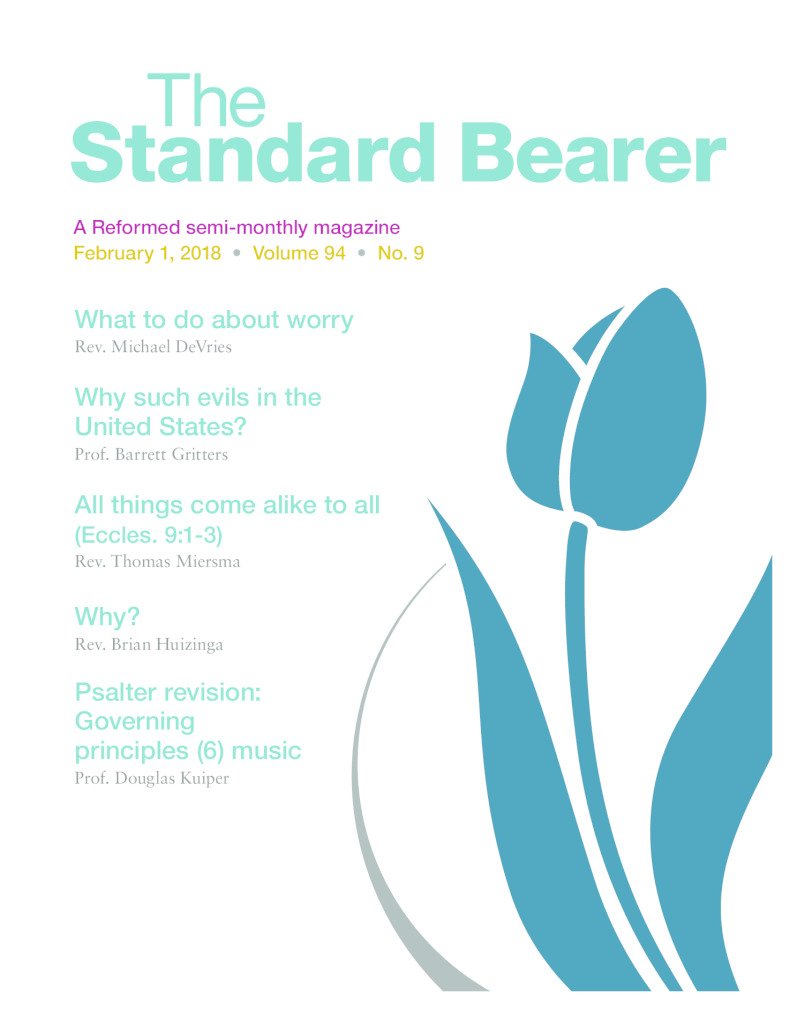