During the first half of the decade of the 1940s, the Protestant Reformed Churches began the work of organizing its synodical committees under constitutions. In 1940 the Emeritus Committee presented its Constitution to the synod for approval. The Synod of 1941 adopted the Constitution of the Theological School Committee. The Synodical Committee’s Constitution was approved at the 1942 Synod. It was time for the Mission Committee to draw up and adopt its own constitution as well. This task was also brought to its completion by the Synod of 1942. For the interested reader, this original Constitution of the Mission Committee is found in the 1942 Acts of Synod, pages xxiv-xxix. The changes synod made to this draft are found on pages 26 and 27. The motion to adopt the Constitution with its changes is found on page 31, Article 20.

Constitutions are good and necessary. A constitution defines the committee, sets forth the goals and purposes of that committee, outlines its duties, places bounds on that committee, and ultimately generates decency and good order in the function of that committee. This is why our churches insist that every standing synodical committee adopt a constitution under which it must labor. It only stands to reason, of course, that the contents of these constitutions might change according to circumstances and the needs of the churches. This has happened several times with the Constitution that now governs the Domestic Mission Committee (DMC) and its labors. As the emphasis of our mission labors changed, so also did the Constitution. For this reason, the Mission Committee Constitution we have today as churches is different from the one originally adopted in 1942.

A few observations regarding this first Constitution are worthy of note.

First, the scope of mission work remained the same as the report defining the task of the Home Mission Committee adopted by Synod of 1932, ten years earlier: “We are convinced that our present duty lies primarily in the field of church extension and church reformation.” That this particular verbiage was intentional is evident from the cover letter the Mission Committee sent to Synod of 1942 with its draft of the Constitution. In the second paragraph of this letter we find, “may we state that this constitution has been drawn up with a view to the regulation of the missionary activity as now conducted by the Protestant Reformed Churches in the form of church extension work” (emphasis mine).1 That the Mission Committee itself was of a mind to limit its labors to church extension and church reformation is evident too from the proposed draft of the Constitution submitted to the Synod of 1942, the wording of which was changed by synod. “We conceive our present field to be among our Reformed brethren that are deviating from the old and beaten paths of our Reformed heritage.”2 The scope of home missions, therefore, remained narrow.

The Mission Committee of the Protestant Reformed Churches is a committee chosen by Synod, to regulate and supervise all missionary activity prescribed and delegated to it by Synod. Hence, the Committee is a Synodical Committee, and responsible only to Synod for its actions.3

This definition seems simple enough, but it has serious implications concerning who must carry on mission work: the synod or the local church. In the mid-seventies this definition, along with other articles of the Constitution, was part of serious debate. It was contended in an overture that the Constitution gave to the Mission Committee “the authority which is the exclusive prerogative and domain of the autonomous local consistory of the instituted church, an authority which Synod itself does not have and therefore cannot delegate to one of its committees.”4

The result of this debate is that synod expressed agreement with the overture and the Constitution was changed to the one we have presently. We will write more about this debate when we study the work of missions in the 1970s. It is good to note, however, that constitutions do determine the work of various committees, in this instance that of the Mission Committee.

A third observation regarding this original Constitution is that of the makeup of the committee. We mentioned in a former article that synod decided to form two divisions of the Mission Committee, one located in the West and the other in the East. The Constitution lays out carefully the relation of these two divisions and how they are to function with one another. Today the DMC is made up of 10 men out of Classis East, while the Foreign Mission Committee is made up of 10 men out of Classis West. The original division of the Mission Committee is worthy of note because it led to problems between the eastern and western branches, as we will find out.

By the year 1945 the Mission Committee had little to do in the way of mission work. It reported to synod that year, “The report of your committee will be necessarily brief this time for the reason that very little work has been performed in this last interim.”5 In response, the synod reminded the Mission Committee of the mandate that had been given it by the 1944 Synod.

The consistory of the Manhattan, Montana PRC overturned synod through Classis West: The Consistory of the Manhattan Protestant Reformed Church requests that Classis overture Synod to investigate the possibility of establishing an outlet for Foreign Mission endeavor in the way of supporting some reputable Mission now, and, in case this proves to be impossible, that a fund be established for this work in order that when the opportunity presents itself, either to support some reputable mission or to establish our own Foreign Mission, we will be prepared to make use of it.6

The committee approved a number of recommendations.

First, it recommended that our churches establish a fund with a view to seeking and establishing a foreign mission field of our own. The initial amount of money to be raised for this fund was set at $10,000. Second, the Mission Committee advised that the fund be used to support some reputable existing foreign mission endeavor (of another denomination of churches), in case it becomes impossible to establish our own foreign mission work. Third, that a committee be set up to contact Dr. J. DeKorne (of the OPC) to gather as much information as possible for a future labor in China. Then, finally, the Mission Committee decided to make its intentions known to the denomination (though still not having heard word from the western branch of the committee) via the Standard Bearer and the Concordia, the church periodicals.7

The eastern division of the Mission Committee again met in December of 1945. The western branch sent a couple of pieces of correspondence expressing concerns it had with beginning a work in China.8 The secretary of the eastern branch was instructed to answer these questions. But the eastern branch was on a roll and it decided to push on with this new venture. The committee to meet with Dr. DeKorne reported:

China is a large field. The Chinese are generally an intelligent and noble people. The language can be studied in this country or in language schools in China. The latter is most favorable since one remains in contact with the language every day. After about 1 year or 1½ years an individual should be able to acquire enough knowledge of the language to give testimony. The ideal method of work, according to DeKorne, would be to send 2 or 3 families together to work out of from a central post where the families could live together. This has several advantages. The many rivers and canals in China make it possible to work with a houseboat and move from place to place. It is not difficult to arouse interest among the Chinese and an audience is soon gathered willing to listen. Several items of expense were mentioned which would require a minimum of $10,000 to start a work in China with a single family in the field.9

The eastern branch of the Mission Committee was impressed by this report. The possibility of a foreign mission work in China, it felt, was within grasp! For that reason, in Article 8 of the Minutes of the December 3, 1945 meeting, the eastern branch of the Mission Committee (despite the questions and concerns of the western branch) moved to advise synod to consider China as the best field to work at this time. They believed the grounds to this motion were convincing:

Other motions were raised concerning China at this meeting, but these decisions are not available due to a missing page (129) in the Minute book. This advice was sent to the Synod of 1946 without the concurrence or input of the western division of the Mission Committee. This, among other factors, created a rift between the East and the West in the matter of missions. We will attempt to document the dispute over China missions and other factors that led to this division in a future article.

8 Two supplements from the western branch were read at this meeting. These supplements are not available. Their content, therefore, is not known. 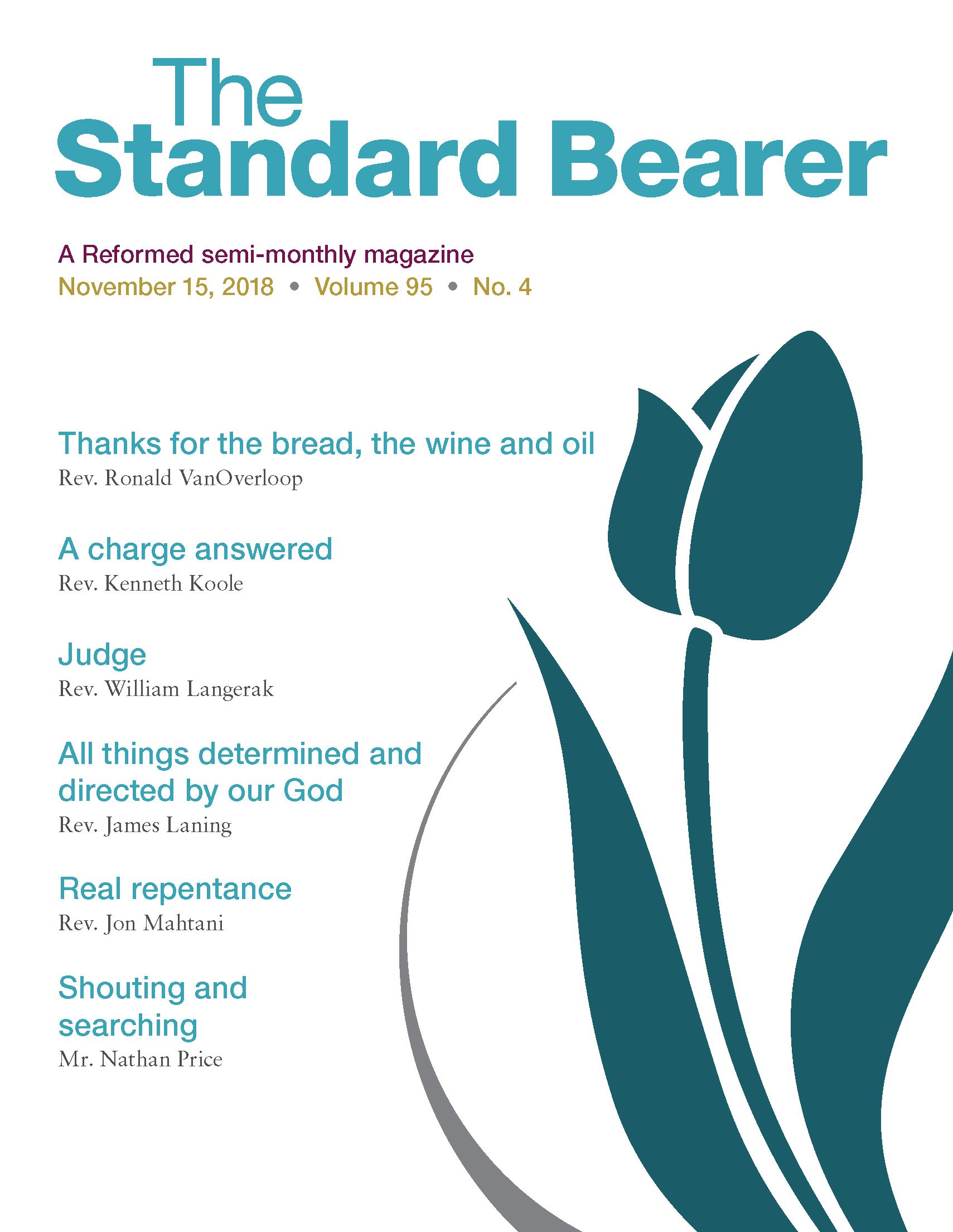