The consistory of South Holland Protestant Reformed Church in Illinois was frustrated. This church was working in the Roseland, Chicago area with little results. This frustration was voiced at the June 1935 meeting of Classis: our outreach lacks personal labor. Much more must be done than merely hosting lectures. For this reason, this consistory recommended to Classis calling a missionary to labor in the Roseland area. Other congregations had expressed the same complaint in their outreach. For example, in 1933 the small Los Angeles congregation expressed to Classis that there was much work to be done in the Los Angeles area, but a man was needed for the work. While asking for permission from Classis to call a pastor of its own, the consistory reasoned:

There is a field indeed [around the Bellflower/Hynes/Clearwater area]; but a field where a spiritual harvest would be garnered often times needs more intense cultivation and careful, consistent work than a field where natural grain would be harvested. Our aim is to devote all possible time and effort not required for our own congregation to the work in the districts mentioned. It is our aim to do those systematically, consistently, discreetly…. Especially where our cause runs counter to, and causes serious questionings in the ranks of the opposition, it is necessary that our mission be published, for only through a well-directed program of publicity may we hope to awaken those who have been lulled to sleep.

Such a program cannot be properly carried out while Los Angeles is served periodically with supplies from classis. Do not infer that the services of the brethren Veldman, Cammenga, and Vos were, or are, unsatisfactory. We have nothing but praise for the consecrated effort of these brethren in behalf of our congregation. But the continual changes in leaders is hardly conducive to sustain interest on the part of the objects of your missionary effort.1

On the basis of the compelling grounds submitted to the June 1935 meeting of Classis by the South Holland PRC consistory, it was decided in Article 37 to investigate the request of South Holland by placing the matter into the hands of the Mission Committee with Rev. H. Hoeksema as advisor. This committee submitted a concrete proposal to the next meeting of Classis in January 1936 that our churches call a missionary to labor in missions. This proposal included a request that the classical assessment per family be raised from $2.00 to $4.00 a year. A third recommendation advised that the missionary live in Roseland, Chicago, since this was a central location, that the tentative fields of labor be Roseland and Grand Haven, and that Classis appoint South Holland to be the calling congregation. The budget was passed only after long and hard debate. To double the assessment of the families of our churches would place a tremendous strain on them. Remember, these were the Depression years. But the need of a missionary prevailed and the budget was finally approved.

Of interest, however, is the decision Classis made regarding the other recommendations of the Mission Committee: “Fuller Avenue is designated by the Classis as the calling church. Grand Rapids is designated as his place of residence. The field of labor for the missionary will be determined by the Mission Committee along with the calling church.”2 This decision was contrary not only to what South Holland church had proposed, but also to the recommendation of the Mission Committee. There were no grounds recorded for this decision. Was there heavy debate over this issue? Perhaps. Maybe South Holland at this point did not prefer shouldering the responsibility of a mission work, although that seems unlikely. Maybe labor in Roseland was no longer all that promising. We do not know. But in God’s providence the labors of the first missionary would be under the control of First PRC in Grand Rapids and the missionary would begin by living there too.

Now the calling process began. Who would become the first missionary of the Protestant Reformed Churches? By the June 1936 meeting of Classis no one had accepted the call. First PRC in Grand Rapids received approval from the Classis that all our ministers, including those who had not served their congregations the customary two years, be eligible for a call to be missionary. This served to broaden the list of ministers from which to choose a missionary. It was reported to the January 1937 meeting of Classis that, after three unsuccessful attempts to call a missionary, Rev. Bernard Kok had accepted the call in the Fall/Winter of 1936. He was installed on February 18th, 1937 in First PRC in Grand Rapids and immediately began his labors in Highland, Indiana.3 In his first report to Classis of June 1937, Rev. Kok informed Classis of what he discovered in his initial work as a missionary. There was “very little interest in the Reformed truth.”

For the past three months we have labored extensively in the community of Highland, Indiana. At this place we have preached twice each Sunday in the English language. These services were held in the afternoon and evening in the Highland school auditorium. At these services we had an average of 25 to 50 people, the majority however were members of our congregation at South Holland, which is about 14 miles distant. Besides conducting regular Sunday services, we have distributed in this community approximately 600 Standard Bearers and 5 or 6 pamphlets published by Fuller Ave. Sunday School. Apparently we have not seen much positive fruit upon our labors. The leaders of the Christian Reformed Church show much more opposition to the Reformed principles we seek to propagate than over against the superficial Arminian and humanistic propaganda of our day. Although discipline in general in this community is at a woefully low ebb, the people are admonished not to attend our meetings. Even modernism is more welcome than the proclamation of the sovereign grace of God.4

Rev. Kok continued his labors in Highland for another three months with no further evidence of interest in the area. During that three months he corresponded with saints in Manhattan, Montana and Lynden, Washington. Our churches had been contacted earlier by these saints, asking us to come and preach for them with a view to organizing a church in their areas. In fact, correspondence had already been sent to Lynden in late 1935 that, if our churches would indeed call a missionary, this man would be available to do work in Lynden and vicinity.

Before traveling out to the far West, however, Rev. Kok concentrated his labors for a short time in the Midwest, in a small town named Edgerton, Minnesota. The result of these labors was the organization on April 11, 1938 of a congregation consisting of sixteen families. After spending six more weeks in Edgerton, Rev. Kok was sent to Manhattan, Montana by First PRC to investigate a future mission work there. In June of 1939 (the last meeting of Classis before our churches were organized into two classes and an annual meeting of synod) Rev. Kok reported the following concerning his labors in Manhattan,

It is with gratitude to God that we may report that we have found an open door in Manhattan. For the last five months we have conducted two services each Sunday, one in the Holland and one in the English language. We also conducted one service during the week besides having a sort of Bible class every Monday evening. These services were very well attended. Also at Manhattan we have experienced rather strenuous opposition, but the Lord has turned it to our profit. Many have testified and expressed their appreciation that they might again hear the truth of God’s sovereign grace. There is a group of about 16 families or more that have been attending our meetings very regularly and who are gradually becoming more and more convinced of the truth. I believe this group is ready for the step of organization….5

It should be noted that at the meeting of Synod in May 1940 it was reported by the Mission Committee that Manhattan was organized into a congregation of 12 families and approximately 75 souls. Rev. Kok remained there for several more months before moving to a mission field elsewhere. This was the extent of our mission work during the 1930s.

But there is one other important matter that does not appear in the Minutes of Classis during this decade. It is found mainly in the writings of the Standard Bearer. In 1932 Classis had declared that the scope of our mission labors was the Christian Reformed Church and after that the Dutch Reformed Church (Reformed Church of America—RCA). At the same time, however, there was always an interest in the events transpiring in the Reformed churches in the Netherlands too. The few pamphlets the Mission Committee published up to this point were written both in Dutch and English and widely distributed in the Netherlands. Likewise, Rev. H. Hoeksema kept the readers of the Standard Bearer informed of developments in the Netherlands, especially in connection with controversies over the covenant, baptism, and common grace. Our ministers and churches did not yet realize in the 1930s that the affairs of the Reformed Church in the Netherlands would have a profound effect on our mission work during the 1940s and early 50s.

In 1939 Dr. Schilder visited America, setting off a series of events that would eventually lead to the split of 1953 in the PRC. These events had a direct bearing on our mission work during these years.6 During the visit of Dr. Schilder in 1939 a conference was held in the Pantlind Hotel (now Amway Grand) in downtown Grand Rapids, MI between a few ministers of the CRC and those of the PRC. Schilder helped orchestrate this meeting and was personally present. The subject of the conference was the possible reunion of these denominations. Rev. H. Hoeksema presented a speech there that later was printed in pamphlet form and distributed by our Mission Committee. It was entitled, “The Reunion of the Christian Reformed and Protestant Reformed Churches.” The Christian Reformed men who attended this meeting were not prepared to give any speeches or to present any kind of position paper. In fact, they showed very little interest in talking about a possible reunion. Dr. Schilder was greatly disappointed with the obvious antipathy shown by the men of the Christian Reformed Church at this meeting. He now turned with interest to the Protestant Reformed Churches. Our churches welcomed him. As a result, Dr. Schilder spent the rest of his visit to the United States touring our churches and lecturing on his view of common grace.

We make reference to this bit of our church history because it had immediate effects on our mission work. The June 1939 Classis approved the following request submitted by the Bellflower, CA PRC Consistory and supported by Hope PRC, Redlands, CA:

The Classis appoint a committee to investigate the desirability of correspondence with the Reformed Church of the Netherlands.

1. The unity of the church of Christ requires of us that we join ourselves as closely as possible with churches, which, after sufficient investigation, prove to take seriously the truth that we confess, in order that we may enjoy the spiritual fruit of mutual instruction, admonition and strengthening in the common struggle for God’s covenant.

2. The Reformed Churches of the Netherlands maintain with us the same confessions, namely, The Three Forms of Unity, and these churches direct their lives according to the Church Order of Dordt.7

The following committee was chosen: Rev. H. Hoeksema, Rev. G.M. Ophoff and Rev. H. DeWolf. We will consider the results of this decision and others in a future set of Standard Bearer articles.

1 Minutes of the Classis of the Protestant Reformed Churches (PRC), February 1, 1933, Supplement 9b.

6 For a detailed account of what happened beginning in 1939, confer Prof. Herman Hanko’s book, For Thy Truth’s Sake and Gertrude Hoeksema’s book, A Watered Garden (rfpa.org). 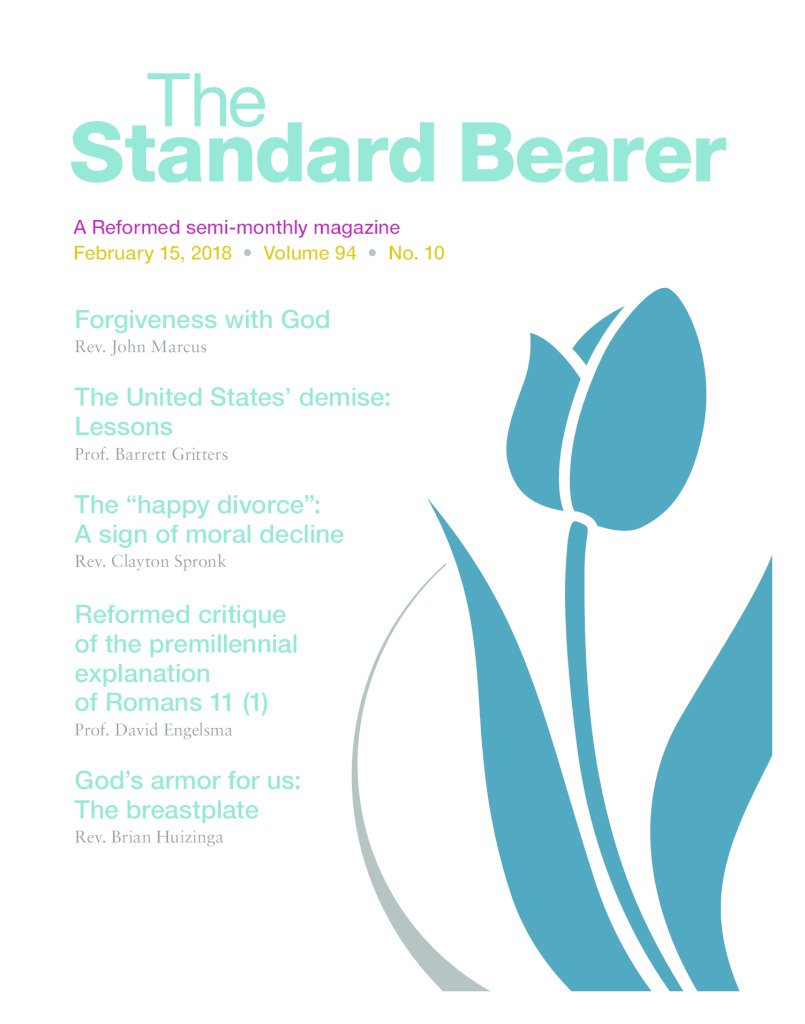