“This one fellow came in to sojourn, and he will needs be a judge….” Genesis 19:9

With the radical secularization of Western nations, we are witnessing increased suppression and silencing of Christianity and Christians, with an increased promo­tion of anti-Christian beliefs and practices. Arguably, the greatest anti-Christian voice in Western nations—especially Europe, the United States, and Canada—is the pro-homosexual lobby. These nations, under the guise of tolerance, promote aggressively the notion that homosexuality is a good and acceptable way of life that must be tolerated—nay, affirmed and celebrated—by everyone. Christians remain among the few voices left in society who question and oppose the pro-homosexuality agenda.

Their voices must be silenced—through intimidation and finally through legislation.

The Sodomites took umbrage with Lot’s words in Genesis 19:7: “I pray you, brethren, do not so wickedly.” It was Lot’s accusation of wickedness that caused them outrage, or, to speak in the language of modern anti-discrimination legislation, that caused them “harassment, alarm, or distress.” The ancient Sodomites threatened Lot with violence. The modern homosexual will take his alarm and distress to the police and to the courts—and, increasingly, he will win!

The following cases are just a sample.

Take Tony Miano, an American preacher arrested in London, England, on July 1, 2013, for an alleged violation of Section 5 of the Public Order Act (with a “homophobic ag­gravating factor”). The Public Order Act prohibits threat­ening and abusive behavior and speech, but increasingly it is used to silence street preachers who have the temerity to suggest that homosexuality is sin. Should a passerby take offence at a street preacher’s remarks, the police can be dis­patched and the offending preacher arrested, locked up for hours, fingerprinted, and interrogated. Whether or not one agrees with the style of many street preachers, this trend will surely have a chilling effect upon freedom of speech. The entire transcript of the police interview, as well as the video of Miano’s arrest, are available online.1 In the course of the interview, the police officer asked Miano, “She [the supposed complainant in this case] heard him [Miano] say, ‘Homosexuality is a sin; we all know it’s wrong.’ Did you say that?” Upon Miano’s affirmative response, the interviewing officer remarked: “Okay, she says she was extremely of­fended by this, which caused her a lot of distress.” Later, the officer added, “She said due to the man making homophobic statements, saying homophobic statements in a public place, that she felt an offense had been committed, and she called the police.”

So, in England, one can be arrested if a homosexual “feels” distressed, offended, or alarmed by another per­son’s words, even if those words were not abusive, threat­ening, or violent. The complainant in the case even ad­mitted to mouthing swear words at Miano—those words were not considered threatening, abusive or alarming, only Miano’s unacceptable and supposedly homophobic words that homosexuality is sin!

Take Hazelmary and Peter Bull, a couple who run a guesthouse in Cornwall, England. Since their guesthouse is also their home, they insist that only married couples may share a double bed on their premises. That position brought them into conflict when in 2008 two men in a “civil partnership” desired to stay there. In keeping with their Christian moral code, the Bulls refused to permit two homosexual men to share a double room. Instead, they offered the men two single rooms. This led to a court battle in which it was determined that the Bulls may not discriminate against homosexual couples. When the Bulls argued that they did not discriminate, because they did not permit unmarried heterosexual couples to share a double room either, their appeal was denied. The Bulls have suffered a campaign of intimidation, vandal­ism, and abuse, and now they face financial ruin—simply because they refused to sanction a same-sex relation­ship. One might argue against the inconsistency of the Bulls’ position—for example, how do Christians run a guesthouse on Sundays; and how do they treat divorced and remarried couples?—but cases like this show that the Christian position is being marginalised, while the pro-homosexual agenda marches on.

Take Joe and Helen Roberts in Lancashire, England. In 2005, they wrote a letter of complaint to their local council about the official promotion of “gay rights,” some­thing the Roberts find offensive. Several days later, they were subjected to a lengthy interrogation in their own home by two police officers, who advised them that they were being investigated for a reported “homophobic inci­dent.” Reportedly, the police warned them that they were close to a “hate crime” and were “walking on eggshells”—and this because they had disagreed with the promotion of “gay rights,” which someone (possibly a council worker) had found “offensive”! After a protracted legal battle, the police and council admitted in December 2006 that they had acted inappropriately in the case of the Roberts, and, in an out-of-court settlement, the Roberts received compensation.

Take Dr. Alan Clifford, pastor of Norwich Reformed Church, who was visited by an officer from his local po­lice force, the Norfolk Constabulary, on August 17, 2013. A complaint had been filed against him. His crime? He had sent two tracts by e-mail, “Christ Can Cure—Good News for Gays” and “Jesus Christ—the Saviour We All Need.” Some offended persons reported Dr. Clifford to the police—the allegation against him is “homophobic hate.” Unfortunately for Dr. Clifford, and unfortunately for free speech, a “homophobic incident” is, according to the official police literature, “any incident which is perceived to be homophobic by the victim or ANY other person.”2 If beauty is in the eye of the beholder, homophobia is in the perception of the perceiver! Inter­estingly, Clifford’s Christian complaint against the public display of homosexual propaganda is dismissed. Chris­tians are not permitted to be offended by homosexuality, and they certainly may not express their offence. Clifford was told that he had two options. Either he admits his guilt and pays an on-the-spot-fine of £90 (c. 145 USD), or he can contest the claim, in which case a senior officer will decide whether or not to refer the case to the CPS (Crown Prosecution Service; British equivalent of DA). After opting to contest the claim, Dr. Clifford gave a statement to the officer, who passed it to his superiors. Dr. Clifford now awaits a decision on whether or not he will be prosecuted, and if convicted, he could face a jail sentence.

The fact that these cases did not end in prosecution or conviction does not mean that the law will not continue to be misused in this manner, so that every aggrieved or insulted homosexual, whose perception of being insulted is taken much more seriously than any other group’s, can bring his complaint to the police, who will then waste their time on an alleged “homophobic incident,” or even “hate crime.”

But surely our American brethren enjoy First Amend­ment rights of freedom of speech and religion?

Those rights are being challenged by the pro-homosex­ual lobby, again under the guise of tolerance. On August 22, 2013, the Supreme Court of the state of New Mexico ruled that a photographer must take photographs at a same-sex “commitment ceremony,” even though “same-sex marriage” is not (yet) lawful in that state. Elane Photog­raphy, run by Elaine and Jonathan Huguenin, declined in 2006 to photograph the commitment ceremony of two lesbians, a ceremony that included vows, rings, a minister, flower girls, and a wedding dress. The offended lesbian couple filed suit. The case went to the State Supreme Court. The findings of the court were interesting—and troubling. The Huguenins fell afoul of the New Mexico Human Rights Act (NMHRA). The Supreme Court of New Mexico ruled that, in refusing to photograph a same-sex “commitment ceremony,” Elane Photography “violated the NMHRA in the same way as if it had re­fused to photograph a wedding between people of differ­ent races.” What the Huguenins and business owners in a similar situation could do is “post a disclaimer on their website or in their studio advertising that they oppose same-sex marriage but that they comply with applicable antidiscrimination laws.” Moreover, “the NMHRA does not permit businesses to offer a ‘limited menu’ of goods and services to customers on the basis of a status that fits within one of the protected categories. For example, a photographer may not offer to photograph a birthday party, where no homosexuality is obvious in the photos, but decline to photograph a wedding or commitment ceremony, where homosexuality is promoted, endorsed or approved in the photographs themselves.” A company such as Elane Photograph “can remain in business, but it can cease to offer its services to the public at large.” Justice Richard C. Bosson wrote the Conclusion:

The New Mexico Legislature has made it clear that to discriminate in business on the basis of sexual orienta­tion is just as intolerable as discrimation directed toward race, color, national origin or religion…. The Huguenins today can no more turn away customers on the basis of sexual orientation—photographing a same-sex marriage ceremony—than they could refuse to photograph African-Americans or Muslims.

What Justice Bosson writes next is, in his own words, “sobering”:

All of which, I assume, is little comfort to the Huguenins, who now are compelled by law to compromise the very religious beliefs that inspire their lives. Though the law requires it, the result is sobering. It will no doubt leave a tangible mark on the Huguenins and others of similar views…. This case teaches us that at some point in our lives all of us must compromise, if only a little, to accom­modate the contrasting values of others…. In short, I would say to the Huguenins, with the utmost respect: it is the price of citizenship.3

There is the choice—photograph same sex “com­mitment ceremonies” (marriage ceremonies, as Justice Bosson describes them) or go out of business. These kinds of cases raise a whole range of questions. Should a Christian baker refuse to make a “wedding” cake for two men; should a Christian printer refuse to make “wedding invitations” for two women? And, if so, where does one draw the line? One wonders how the apostle Paul ran his tent-making business in Corinth, for example.

But, let us remember the facts—a same-sex couple not only may not marry, they cannot marry. Marriage by definition—God’s definition, Christ’s definition, and the definition preached by the apostles—cannot be between two persons of the same sex (Matt. 19:4-6), and no per­son, theologian, politician, president, or human court can ever change that. Also, let us notice that Justice Bosson urges compromise, but the compromise he urges is in one direction only. The homosexuals need not compromise—they are a legally-protected, recognized minority.

Christians, we are told, must compromise.

And Christians are compromising. Churches are fall­ing over themselves to compromise. They are looking for theological justification to compromise. Failure to compromise will incur the displeasure of the state.

But compromise will displease God.

2 The official pamphlet can be accessed on http://www.norfolk.police.uk/ 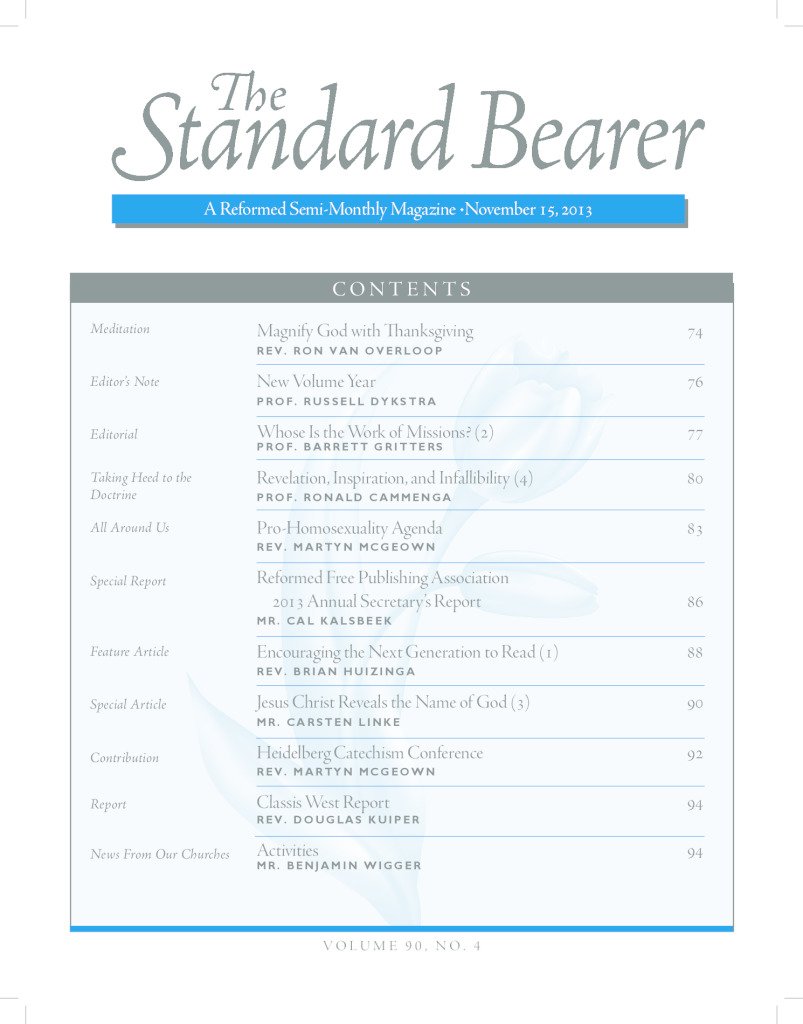