The Fifth General Assembly of the Presbyterian J Church in America, meeting in the auditorium of the First Baptist (that’s right folks, Baptist) Church of Smyrna, Georgia, was called to order by retiring moderator William A. McIlwaine on the evening of September 12, 1977. The Baptist facility was used because there is no PCA building in the Greater Atlanta area, nor in many other areas for that matter, large enough to handle the 600 plus commissioners who would eventually come together for this meeting.

After hearing and approving the report of a committee dealing with Presbytery boundaries (which included the erection of a new presbytery, Central Florida, and the merging of Vanguard and Tennessee. Valley Presbyteries), the Assembly elected Mr. John Clark, a ruling elder from First Church, Macon, Georgia, as the new Moderator. Mr. Clark has been an able and active leader in the PCA since the early days of the still young denomination.

The business of the Assembly, in its plenary sessions, began in earnest on Wednesday morning, September 14, with the report of Ad-Interim Committee on Constitutional Documents. Lively debate was immediately stirred by a section of this committee’s report dealing with “the husband of one wife” passage in I Timothy 3. The issue involved was that of church officers who have been divorced and remarried.

The committee, on the basis of statements in the Westminster Confession of Faith, Chapter 24, held that men who have been divorced on the grounds of adultery or willful desertion by their spouses, whether they remain single or remarry, may serve as officers in the church. The committee further held that men who have been divorced on other than Biblical grounds should be denied office until they have publicly repented of their sin. It was not clear whether this public repentance would include separation from a second wife, if there had, indeed, been a remarriage, but such would have been the effect of an amendment from the floor which would have made those unbiblically divorced, and then remarried, ineligible for office in the PCA as long as the first spouse is alive.

The matter of whether the remarriage of divorced persons is ever allowable, even when the divorce has been granted on Biblical grounds, was not addressed. Such remarriage is permitted by the chapter of the Confession cited above (though this writer does not agree with the allowance of the Confession at this point). An important question that was raised, however, involved the doubts of some as to whether any divorced man could meet the requirement of I Timothy 3, to the effect that the bishop must have his house in order.

The whole issue was finally sent to a new committee for further study.

Also committed for further study was the report of the Ad-Interim Committee on the Number of Offices in the Church, which has been hanging over the head of the Assembly since the third meeting in Jackson in 1975. The question involved is whether the offices of the church be two (elder and deacon) or three (minister, elder, and deacon). A variation of the first view holds that there are two offices, but with a distinction of task between those who rule and those who both teach and rule. A new view, called the “Triune office view” was introduced at this Assembly; the product of the rather fertile imagination of Dr. Francis Nigel Lee, formerly of South Africa, presently a PCA pastor in Kosciusko, Mississippi. Where and when all of this will end is very much an open question.

One of the most disturbing things about the Assembly, in this observer’s opinion, was its willingness to address itself to issues which hardly seem the province of an ecclesiastical court. This was particularly manifest in the adoption of a resolution wherein the Assembly moved to petition the President and Congress of the United States in the matter of the proposed withdrawal of American troops from South Korea. The Assembly says it is opposed to that.

Now, no one is more sympathetic to the cause of South Korean independence than this writer. And, one can easily understand the concern of the brother who introduced this resolution; himself a refugee from Communist oppression in Hungary. It is also to be admitted that the Confession of Faith allows for such “humble petitions in cases extraordinary.” (Chap. 31:4) The question which must be raised, however, is whether this is, indeed, an extraordinary case. And, if it be deemed such, we must further inquire as to whether the Confession is, at this point, in. harmony with Scripture.

It is interesting to note that in the Scriptural proof-texts offered in support of this article (Luke 12:13, 14; John 18:36), there is no support to be found for synods or councils intermeddling in civil affairs, but a great deal of support for the first statement in this chapter and section of the Confession: “Synods and councils are to handle, or conclude nothing but that which is ecclesiastical.” This statement is also given support by the record of the First General Assembly of Christ’s Church (Acts 15), where the matters handled were exclusively ecclesiastical. That individual Christians, or groups of Christians, may address their government is beyond dispute. That church courts, as such, may do this, is quite debatable.

Moreover, it is disturbing to think that future assemblies are going to have more and more of their time taken with such matters. Two other resolutions, one expressing opposition to “godless Communism,” and the other requesting that we petition the President and Congress “to honor and scrupulously keep its (i.e., the United States’) treaties with and commitments to other nations,” were referred for study to be handled at the next Assembly. And, one wonders what new causes will be before us by then.

All of this, of course, puts the PCA in a rather awkward position in relation to the denomination from which most of our present membership separated—the Presbyterian Church, U.S. One of the greatest complaints about the PCUS assemblies was their taking stands on various political and social issues which were regarded as being outside of the province of the Church. These stands were, it should be noted, almost uniformly liberal in nature. One wonders, now, if the PCA is to become the “flip-side” of the PCUS; also making statements on political and social matters, but from a conservative point of view.

Also disturbing is the fact that the Assembly, in response to a request from something called the Hawaii Right to Life Committee, voted to send a man to Washington, in conjunction with other “conservative” Protestant leaders, to meet with the President to impress upon him the fact that opposition to abortion is not just a Roman Catholic cause. One suspects that the President already knows that, but undaunted, the PCA has decided that we must have our man in Washington, if only for a brief time. Nor was there much concern expressed over the fact that we are aligning ourselves, in this matter, with a secular society whose membership, in some parts of the nation at least, includes such groups as the Mormon church. The question, of course, is whether our common stand with such groups in opposition to the sin of murder by abortion justifies this proposed cooperation.

There is much else that we could report, but our space grows short, so we will limit ourselves to two final items which should be of interest to Standard Bearerreaders.

The first of these involves the attempt by New River Presbytery to get the Assembly to commend thePresbyterian Journal for “the valuable service it renders.” The result, however, was closer to condemnation than commendation. The Committee on Bills and Overtures which handled the matter, recommended (interestingly, with the urging of the editor of the Journal) that New River’s overture be received as information. Obviously, they were trying to avoid a debate over the editorial policies of theJournal which have, in recent years, been antagonistic to a consistent Reformed position and sympathetic to charismatic tendencies in and out of the PCA. The plan went awry, however, when a motion was made from the floor, the substance of which called upon the Assembly to express disappointment over editorial policies of the Presbyterian Journal which appear to, contradict the Reformed Faith, especially in regard to the spiritual gifts.

The motion was easily defeated, but it was amusing to note that even some of those who spoke against the motion expressed dismay over the direction theJournal has been taking. All in all, the Journal wound up with something less than the vote of confidence New River Presbytery had sought.

Practically speaking, this meeting in Grand Rapids makes no sense whatever. The PCA doesn’t have a single congregation in that area. Moreover, the great body of the church is in the States South of the Mason-Dixon line and east of the Mississippi River. There are a few congregations elsewhere, but these represent only a fraction of the total body and none of them is even close to Grand Rapids. Still, some in the PCA are bent on dislocating the whole Assembly to meet “up nawth” so that we can prove the unprovable—that we are a “national” church. And they are getting their way. The last Southern invasion of the North took place in July, 1863, ending at Gettysburg. One hopes that the disaster of that little excursion is not somehow repeated in an ecclesiastical context come next June.

In conclusion, let it be noted that the generally negative tenor of this report should not be taken to mean that everything in the PCA is on the downhill grade. Some of us were encouraged, for example, by the election of certain individuals of strong Reformed conviction to some of the Assembly’s Permanent Committees. Also, one should take into account that, on balance, the Assembly did more re-committing and postponing than anything else. So, there are still opportunities and crucial debates in the future.

Perhaps the best summation of the Assembly would be that which was spoken to this writer by a veteran of many ecclesiastical wars with whom we had the privilege of sitting through most of the meetings. At one point, after a motion he had supported had been defeated, he noted that it got more support than he thought it would. “There’s more life in this group,” he said, “than I thought there would be when we started out.”

One hopes he is right.

But, then, one wonders sometimes. 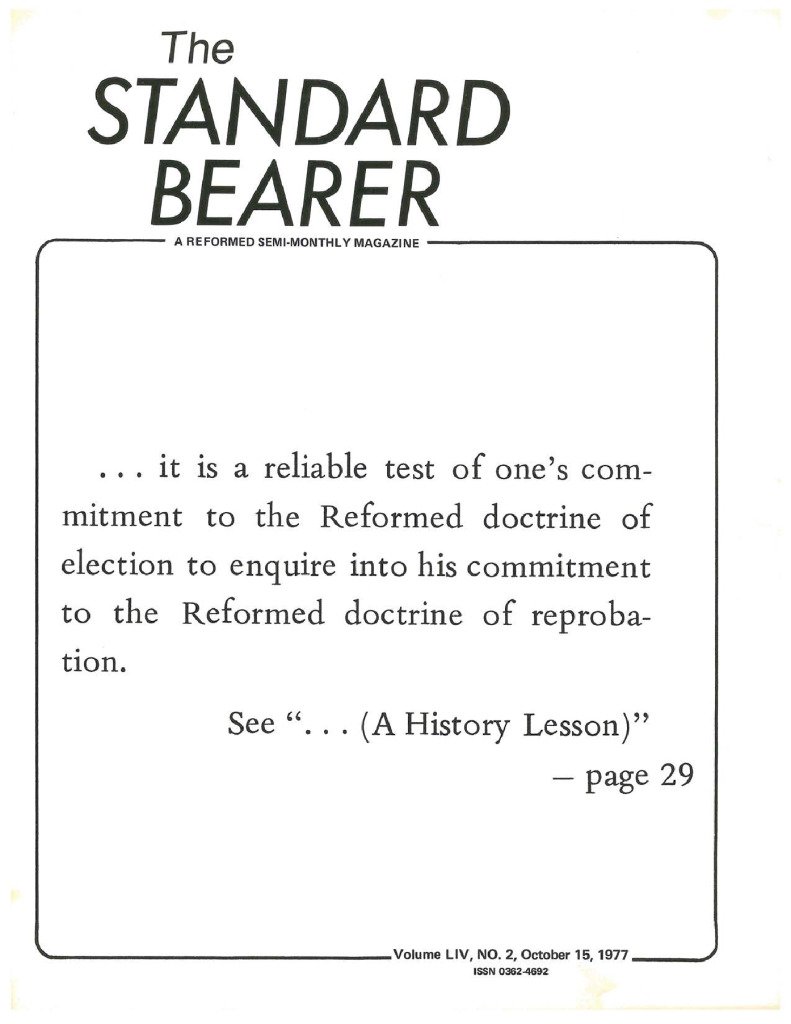