“Why will God…have the ten commandments so strictly preached? .That we may become more and more conformable to the image of God, till we arrive at the perfection proposed to us in a life to come.” Heidelberg Catechism, Q. 115

This “postscript” concerns dispensational premillennialism’s antinomism—its opposition to and rejection of the law of the Ten Commandments as the rule of the Christian life.

Premillennialism denies the truth of Hebrews 10:16, quoted above this article. Premillennialism does not conceive the salvation of the New Testament believer as God’s putting the Ten Commandments into the hearts of New Testament elect believers, and writing them in their minds, so that we continually think the Ten Com­mandments as laws of God that we are commanded to obey in gratitude for His gracious salvation, including the gracious salvation of putting His laws into our hearts.

Premillennialism violently condemns and repudiates the teaching of the Heidelberg Catechism in Q&A 115, quoted at the head of this article. Premillennialism de­nies that the Ten Commandments are to be preached, much less “strictly,” or sharply, preached, as the rule of the thankful life of the Christian and as the means God uses to further the holiness of life of the believer.

Dispensational premillennialism, particularly with regard to its antinomism, has been and still is a threat to Reformed churches in North America. This threat has come closer to home than merely that Reformed Christians in the Chicago area listen uncritically to the radio programs of Moody Bible Institute.

In the early 1900s, the Christian Reformed Church was troubled by controversy over dispensational premillennialism. A gifted, prominent Christian Reformed minister, the Rev. Harry Bultema, fell away to premillennialism and began spreading the error, not only in his own congregation in Muskegon, Michigan, but also throughout the denomination. Especially in his book, Het Wettig Gebruik der Wet (English: The Lawful Use of the Law), Bultema advocated and defended premillennialism’s antinomism. What this consisted of, I showed in the preceding article in this series.

With the then young, Christian Reformed minister, Herman Hoeksema, playing a leading role, the Chris­tian Reformed Synod of 1918 condemned Bultema’s premillennialism, including his antinomism.

Hoeksema’s involvement in this controversy has been of great benefit to the Protestant Reformed Churches, to put them on guard against the prevalent premillennialism of our day, and to form them to honor and use the law of God, as God intends it to be honored and used by His New Testament church.

The antinomism of dispensational premillennialism is appealing to nominal Christians. It makes the way to heaven broad and easy. Antinomism does more, and worse: It excuses and encourages lawlessness of life on the part of those who consider themselves, and are considered, genuine members of the church of Jesus Christ.

No wonder that multitudes of professing Christians today, whose life proves them to be thoroughly carnal, are attracted to dispensational premillennialism and fill the pews of the premillennial churches!

When at a high-powered international congress, or conference, of Christian churches held in Chicago in the early 1980s some proposed and brought to the floor a strong resolution that marriage is the union of one man and one woman for life, so that remarriage after divorce is forbidden as adultery, the premillennial pastors of the big churches, especially in California, immediately squashed this effort to apply the seventh commandment to their churches. As one of the pastors said publicly, apparently without any shame, “If this resolution would pass, I would lose more than one third of my congrega­tion.”

“Thou shalt not commit adultery”—the seventh of the Ten Commandments of the Old Testament—is simply not applicable to members of churches in the dispensation of the new covenant. This is standard premillennial doctrine. The evil fruit is that premillennial churches are filled with impenitent adulterers, who sup­pose that they are saved, and will one day share in the rapture with all the church of Jesus.

The day is coming, however, when both the adulter­ers and their pastors will discover to their eternal shame and damnation that the seventh commandment was binding in the present age, binding also upon members of large, dispensational, California churches, and that the preachers were called to proclaim it.

As is typical of all antinomians, Bultema had a spe­cial animus against the fourth commandment. He attacked the Reformed doctrine that the law applies to the believer as the rule of the Christian life by criticizing the Reformed understanding of the Sabbath command­ment. “The fourth commandment, for example, one [that is, the Reformed believer—DJE] abandons or one knows how to explain it in such a way that finally Sun­day is intended. The [Seventh Day] Adventists have an appearance of right when they rage against this, for the law does not allow itself thus to be mutilated.”1

Bultema applied his theology of the law to the prac­tice of the church. He forbade the reading of the Ten Commandments in the worship of the church.2 Thus, he and his church became “lawless” in the fullest and most literal sense of the word.

Herman Hoeksema, then a young, recently ordained Christian Reformed minister, was deeply involved in the controversy over dispensational premillennialism raised by Harry Bultema. Hoeksema wrote the report con­demning Bultema’s theology that was adopted by the Christian Reformed Synod of 1918. The report centered on Bultema’s erroneous, premillennial eschatology. The decisive issue in the report was Bultema’s premillennial denial that Jesus is King of the church, thus insisting on the essential difference between the (Jewish) kingdom and the (largely Gentile) church. The report appealed to Article 27 of the Belgic Confession, which calls Jesus the King of the church.

This tactic of the committee condemning Bultema’s premillennial theology was correct. Positing an essential difference between Israel and the church is the fundamental error of dispensational premillennialism. In combating heretical teaching, the church must take hold of the root of the false teaching.

Hoeksema’s regard for the law

At the outset of his exposition of the law as it occurs in the third section of the Heidelberg Catechism, Hoeksema considered the two main objections to the use of the law as a guide to the Christian life.

Secondly, there are those who in general are known as Antinomians, who would lay all the emphasis on justification in Christ. They are afraid that the preaching of the law may have the effect of inducing the Christian to seek his salvation in the way of fulfilling the law of God. The only effect of the preaching of the law as a rule of life, they say, is and must be that we become Pharisees, that once more we seek our salvation in the way of our own righteousness, the righteousness of good works, and that thus we deny the atoning blood and the perfect obedience of Christ.4

To these objections against preaching the Ten Com­mandments as the rule of the Christian life, Hoeksema responded: “I cannot agree with the conclusion that is supposed to be deduced from these arguments, namely, that it is a mistake or unprofitable for the believer to be instructed in the law of God.” He added: “Nor is it true that the law cannot be and is not a safe and necessary guide to direct his way according to the will of God…. Well may he [the Christian wholly saved by grace alone—DJE] daily take the law for his compan­ion, to instruct him, enlighten him, and warn him from the way of sin.”5

And then Hoeksema devoted some 320 pages to the exposition and application of the Ten Commandments as the rule of the Christian life.6

Wrapping up his explanation of the law, Hoeksema called attention to “Antinomians of every shade.” He charged against them all that they are “inclined to minimize, to say the least, the significance of the law of God for the Christian, and the calling of the people of God to walk in sanctification of life.”

He affirmed that “the proper preaching of the law has through the grace of God a sanctifying influence upon the Christian.”7 This affirmation, all premillennialists abhor, and repudiate. Against this distinctively Reformed affirmation of the right use of the law by the Reformed preacher, and by God Himself, Harry Bultema had raged in his little book, The Lawful Use of the Law.

As he wrote these words affirming the use of the law in the divine work of sanctification, it is inconceivable that Hoeksema did not have in mind Harry Bultema and the doctrinal controversy with Bultema in which Hoeksema was intimately involved.

By the Bultema controversy, therefore, God direct­ly and significantly blessed the Protestant Reformed Churches by impressing on their ecclesiastical mind the right understanding of the continuing place of the law in the church and in the life of the Christian.

As little as the Protestant Reformed Churches are no- mists, so little are they antinomists! Thus, they show themselves soundly and confessionally Reformed.

Thus also, already some one hundred years ago, God safeguarded the Protestant Reformed Churches and others against the widespread and deadly threat of premillennialism, with particular regard to its antinomism!

1  Bultema, Het Wettig Gebruik der Wet [English: The Lawful Use of the Law] (Muskegon, MI: Bereer Publishing Comm., 1922), 48. The translation of the Dutch of this quotation, and of all subsequent quotations, is mine. 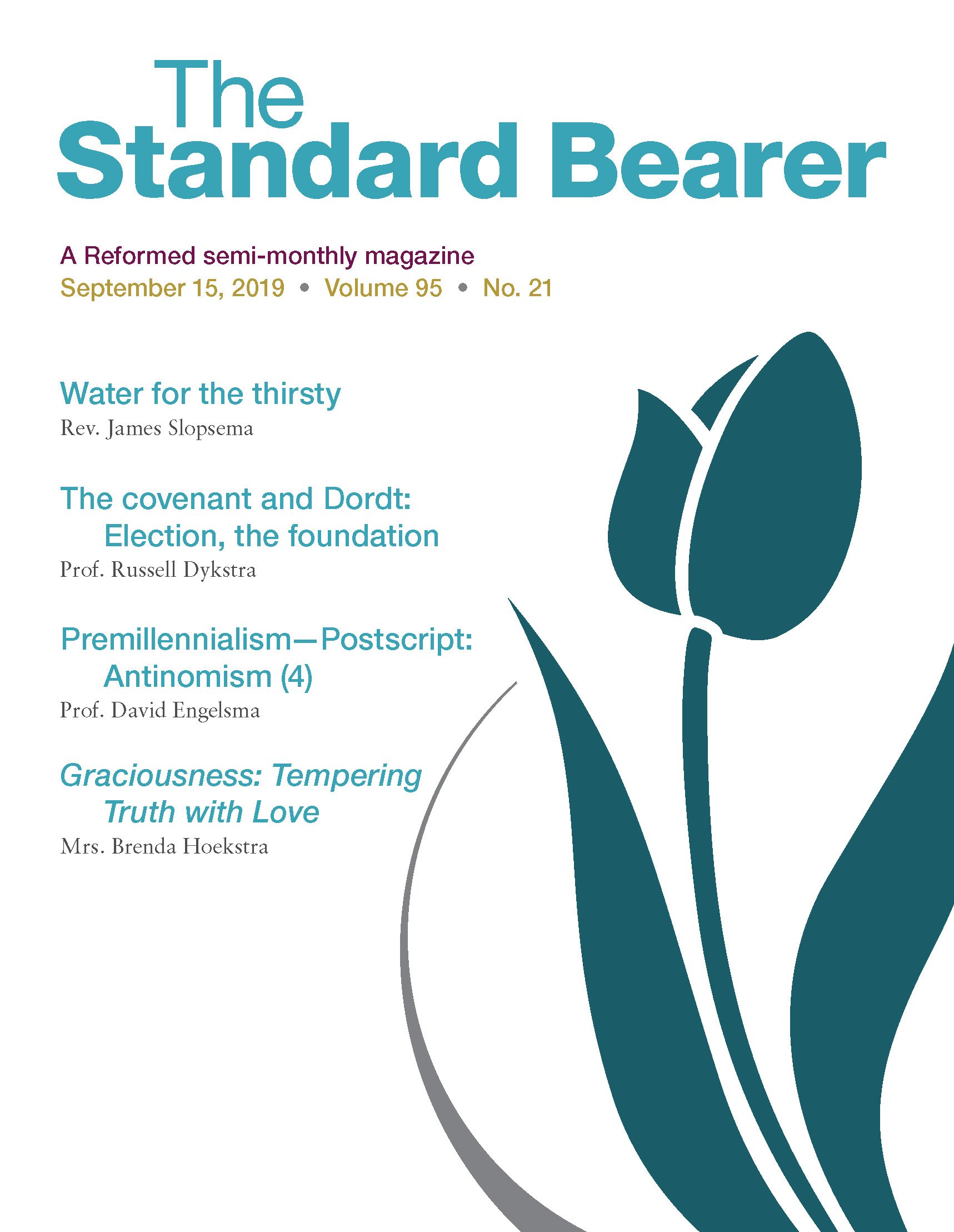