Often when we consider the great Reformation of the sixteenth century we confine our thinking to those two great principles of the Reformation, that of the sole authority of Holy Scripture (the formal principle) and that of justification by faith only (the material principle). And while it is certainly correct to recognize these as the principles of the Reformation—and even highly necessary and profitable to call attention to them and re-emphasize them in our time—it is a mistake toconfine our thinking to them. There is another facet of the Reformation which is of utmost importance both as a principle and from the practical point of view. It is important as a principle: for it is a principle of allreformation. From a practical point of view it is important: for without it there can be no reformation today.

I refer to the preaching of the Word.

This is simply a fact of history. It was even true already of the so-called pre- Reformers. What was it that attracted-thousands to a Wycliff, a Huss, a Savonarola prior to the Reformation? It was the fact that theypreached, and that in their preaching the return to the Word began. By this means many were brought to repentance, and the soul’s need of hungering and thirsting children of God was satisfied.

This is exemplified in Martin Luther, first of all. John Ker writes of him in his History of Preaching as follows, pp. 150, ff.:

“It is remarkable that Luther was at first unwilling to preach. Like Moses, he did not recognise his work. He distrusted himself, or he had not yet the impelling fire of Jeremiah and Paul: ‘It was as a fire within me’; ‘Woe is unto me if I preach not.’ It was at the command of his superior, under the vow of obedience, that he first preached in the refectory or dining-room of the cloister at Erfurt, and afterwards in the little cloister church of Wittenberg. (The room was thirty feet long and twenty feet broad.) But when he once began, the’ spirit of preaching grew upon him, and at the request of the town’s-people, he agreed to preach in the town church of Wittenberg, which afterwards became so famous, and in which he lies buried side by side with Melanchthon. This was about the middle ‘of 1515, two years before his rupture .with the Romish Church. Some of his sermons of this period were composed in Latin, and for the learned, discussing the nature of the Eternal Word and His relation to God the Father, with references to the Schoolmen. He has not a definite idea of the Scripture doctrines, nor of what preaching should be. But he is growing. He preaches more frequently, sometimes four sermons a day, in German, and on practical subjects: on the Ten Commandments, the Lord’s Prayer, Repentance, the True Life. He presses the importance of the Bible and of Christ, but he has not yet gained a clear view of Christ’s Cross and its meaning, nor of justification without the works of the law. He has glimpses; he sees rivulets of the river of life, but has not reached the stream and fountainhead.

“The preaching of Luther soon excited movement. Wittenberg on the Elbe . . . was the chief seat of learning in the north of Germany, and students as well as town’s-men flocked to hear him. They felt the newness and boldness of his style and even of his doctrine. His sermons did not treat of ceremonies and fasts, but addressed the moral and spiritual nature of his hearers with unmistakable meaning and directness. He was taking aim at the heart, with arrows which reached their mark; and men love this in preachers. . . .

“Then came the breach with the Papal system through his opposition to indulgences, and this led him to the simplicity of the Gospel, and to the central truth of his preaching—justification by faith. He now found firm footing, and his preaching gained a power which roused all Germany and shook the souls of men. There had been nothing like it since the day of Pentecost. On his way to Worms, to meet the Diet, he could not escape from the crowds. At Erfurt where he had commenced in the little refectory, the great church was so crowded that they feared it would fall. At Zwickau, the marketplace was thronged by 25,000 eager listeners, and Luther had to preach to them from the window. When the Reformation was finally established, regular pastors were placed at Wittenberg, the well-known Bugenhagen and others. Luther had pressing work—the care of the Church and all the controversies, the training of preachers, translating the Bible, writing pamphlets and volumes, giving counsel to princes and people; but nothing could keep him from preaching, at home and wherever he went, on Sabbath-days and during the week. He continued to preach all his lifelong, though broken in health—in this, too, like Knox—and so enfeebled that he often fainted from exhaustion. But to the end he retained his wonderful power. The last time he ascended the pulpit was on February 14th, 1546, a few days before he died.”

We shall have more to say about Luther’s preaching later. For there are questions to be asked and answered about the preaching of the Reformers which are very instructive. But we only wanted, at the moment, to make the point that Luther was, above all, a preacher.

The same is true of John Calvin, who is, after all, closer to us as Reformed people. He was preeminently a preacher.

In his History of the Christian Church, VIII, p. 269, Philip Schaff cites in a note the following information from a French historian, Paul Henry: “Henry says that the Geneva library contains forty-four manuscript volumes of sermons of Calvin; but the librarian Diodati informed him afterwards that there are only nine volumes left, namely, the sermons between the years 1549-’51, 1555-’56, 1560-’61.”

We must bear in mind that in those days it was common practice to have preaching every day. In the three churches of the city of Geneva, a comparatively small city of 20,000 by our standards, there were preaching services not only on the Sabbath, but on every day of the week.

One biographer of Calvin reports that during his second sojourn in Geneva Calvin preached every day. However, Schaff quotes the reliable and first-hand report of Theodore Beza, as follows, p. 445:

“During the week he preached every alternate, and lectured every third day; on Thursday he presided in the meetings of Presbytery (Consistory); and on Friday he expounded Scripture in the assembly which we call ‘the Congregation.’ He illustrated several sacred books with most learned commentaries, besides answering the enemies of religion, and maintaining an extensive correspondence on matters of great importance. Any one who reads these attentively, will be astonished how one little man (unicus homunculus) could be fit for labors so numerous and great. He availed himself much of the aid of Fare1 (who was pastor at Neuchatel, HCH) and Viret (who was pastor at Lausanne, HCH), while, at the same time, he conferred greater benefits on them. Their friendship and intimacy was not less hateful to the wicked than delightful to all the pious; and, in truth, it was a most pleasing spectacle to see and hear those three distinguished men carrying on the work of God in the Church so harmoniously, with such a variety of gifts. Fare1 excelled in a certain sublimity of mind, so that nobody could either hear his thunders without trembling, or listen to his most fervent prayers without being almost carried up to heaven. Viret possessed such suavity of eloquence, that his hearers were compelled to hang upon his lips. Calvin filled the mind of the hearers with as many weighty sentiments as he uttered words. I have often thought that a preacher compounded of the three would be absolutely perfect. In addition to these employments, Calvin had many others, arising out of circumstances domestic and foreign. The Lord so blessed his ministry that persons flocked to him from all parts of the Christian world; some to take his advice in matters of religion, and others to hear him. Hence, we have seen an Italian, an English, and, finally, a Spanish Church at Geneva, one city seeming scarcely sufficient to entertain so many guests.”

In a later installment we shall give further attention to this preaching of the Reformation and shall consider its place and significance. 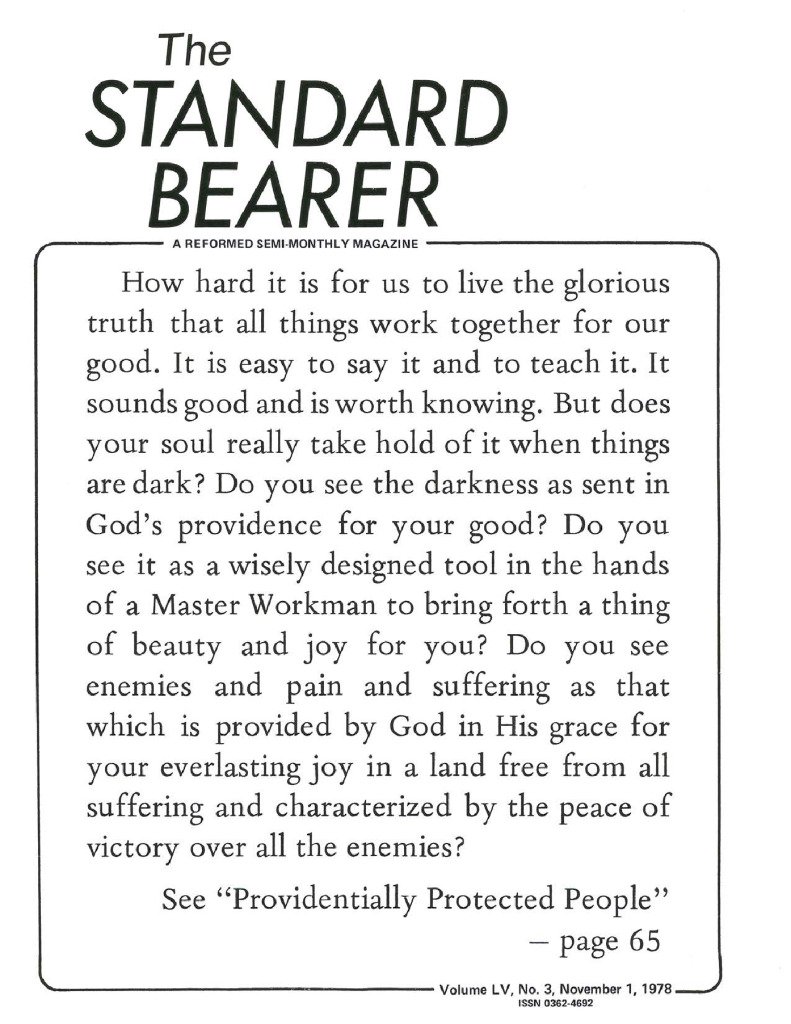