[Note: This editorial is the second part of the convocation speech given publicly for the current school year, held in September of 2013. The first installment demonstrated the biblical basis for requesting fellow saints to “pray for us.” The reasons for praying for the seminary are the three sections of the speech. The first is the spiritual nature of the work. The second is the difficulties faced. And the third is the importance of the work.

In the first section, we pointed out that the work of seminary training is an aspect of the work of the ministry of the gospel. The instruction is authoritative instruction from ordained ministers that God uses to qualify men for the work of the gospel ministry. Thus prayer is necessary for the professors, that God will maintain them as faithful teach­ers and preachers of His Word. The students need our prayers that God will give them receptive hearts and minds, apply the word to their souls, and thus prepare them for the work. We turn now to the second part, namely, the difficulties faced.]

Finally, brethren, pray for us, that the word of the Lord may have free course, and be glorified, even as it is with you: and that we may be delivered from unreasonable and wicked men: for all men have not faith. II Thessalonians 3:1, 2

The first difficulties that we encounter are caused by sin, par­ticularly that found in our sinful natures as professors and students. These are sins present in the na­tures of all God’s people, sins that threaten to destroy any good work of every minister and elder, mother in the home, father, and teacher in school. These sins threaten to pol­lute every good work, vitiate it, and make it void. Into these very sins Satan will strive to lead us.

Pray that God’s grace preserve us from falling into gross sin that would disqualify a student from pursuing the gospel ministry, or that would require a professor to be removed from his office. Do not underestimate the power of sin or the power of our adversary the Devil. We who are in the seminary must never think that because we are “on the hill” we are impervious to temptation. We must not imag­ine that because we open up the Word every single day the Spirit will, necessarily, almost automati­cally, protect us so that there will be no major sins in our lives. We in the seminary must never ever think that.

Neither may you (readers) think that of us. Pray for us that God may keep us from great sin, that we repent of our sins, turn away from them daily, and more and more hate and flee from them. Satan, the roar­ing lion, attacks the seminarians and professors as fiercely (or more so) as he does all the church.

Of the many temptations that Satan might use, there is one that I know he will use, namely, the sin of pride. The apostle John wrote his brief epistle (the third epistle) to faithful Gaius, the well-beloved Gaius, who walked in the truth. For his conduct in the church, John commended Gaius. In that same brief epistle, he warned Gaius about another leader in the church, namely Diotrephes, who “loveth to have the preeminence among them” (v. 9). He loveth to have the preeminence. That love of the preeminence re­sulted in a refusal even to allow John entrance into his home. He would not receive John! He spoke against John with malicious words. He cast people out of the church if they did not agree with him.

Pride is the sin that leads one to love the preeminence. This is one of the most destructive forces in the church of Jesus Christ. And it is a deadly sin in a seminary. A professor who loves to have the preeminence will seek his own glory in the churches. He will speak ill of his colleagues, both those in the ministry and those on the faculty, in order to make himself look better. He will want the students to like him better than they do the other professors. And he will want the people in the pews to prefer him over their own minister or over the other professors in the seminary. That is a deadly and wicked sin.

Students who love the preemi­nence will seek the limelight or try to outdo their fellows, their class­mates, and impress the professors in order to gain the highest honors. In a class of nine (our incoming class), Satan will work hard to have each of them want the preeminence. The student who wants the preeminence will want the churches to recognize his gifts and to stand out above the rest of the students in the seminary. He will want them to see that he has superior gifts for preaching. With that proud, evil heart, he will desire to “be noticed” at synod, and long for the first (most, best?) call from the churches after he gradu­ates.

Few things are more destructive to young men preparing themselves to be slaves of Jesus Christ than the love for preeminence. In pride, such a student will lift himself up to the level or above the level of a professor. That is to say, he will no longer need to heed the instruc­tion of the professors. He may consider himself a gift of God to the churches. And that takes two forms. On the one hand, when such a student enters the ministry he is determined that he will change the churches. He will give this stuffy Protestant Reformed denomination a breath of fresh air. He will change things. Or, on the other hand, he will say (paraphrasing the apostle Peter): “Lord, though all men will compromise with the truth, yet will not I.” A proud student will chafe under the instruction, admonition, and rebuke of the professors. Soon the thought forms: “I cannot wait until I am out of here and I can do it my way.”

Such a proud young man becomes a proud minister. He considers him­self better than all the other minis­ters (or at least most of them) in the denomination, more gifted, more knowledgeable, more Reformed perhaps, and more enlightened. He knows more than his elders. And he does not have to listen to anyone in the congregation. He knows.

Such a man is of no use to Jesus Christ. The Lord calls us to be His slaves. And He demands that all glory go to God alone. A minister cannot seek preeminence and give God all glory, for that man secretly desires the glory for himself.

In light of such spiritual dangers and difficulties, you understand why we plead with you: Pray for us! Pray that God give us the grace to fight whatever is our own particular sin, whether it is laziness, sexual lust, or love of money. But especially pray that God may give us the grace to root out the sin that is in the nature of every one of us: pride. Pray that we might have the mind of Christ, that we might rejoice when we see others have more and different gifts than we do. May God grant that we rejoice and give thanks to God for the sake of His church when we see members, ministers, and prospective ministers who have notable gifts. This is the proper, humble response of all ministers, professors, and semi­nary students.

Your prayers are needed for these men for difficulties, not only in the coming year, but also in the future, as these young men go out into the ministry, the Lord willing. If God will be pleased to give them a place in the church, we need to pray that God is now preparing them for the difficulties—the difficulties of being a faithful minister in a con­gregation, even a solid Protestant Reformed congregation. Difficult issues arise in working with the sheep, caring for lambs and for aged saints, and dealing with stubborn members. The ministers face the heavy workload of preparing two edifying sermons every single week, teaching catechism, leading societ­ies, visiting, visiting, visiting—the sick, the widows, and the shut-ins. Our congregations expect much from their ministers. The work is physically, emotionally, and spiritu­ally taxing and exhausting. Pray that God will equip the students for such work. It is a good work. But it is also a strenuous work.

Pray for them that they have the strength to stand adamantly for the truth in the face of opposition. This opposition may arise right within their own congregations—when they preach against specific sins and that offends some in the congregation who love that sin; and when they preach antithetically and expose and condemn the lie and it offends friends and relatives of the one who holds to that lie. Opposi­tion comes also from the outside. The world hates Christ, the world hates the truth, and the world hates the faithful messengers of the truth. And, closer to home, there is op­position even within the Reformed camp. There are those who would speak malicious words against us because we hold up the truth of sov­ereign, particular grace and reject every compromise thereto. Pray for these men, considering what they must be prepared to endure.

Pray for us as you remember the fact that we live in the last times. Evil abounds. The unmistakable clouds of persecution gather. Min­isters stand in the front line of the conflict. These young men may well be some of the first who give up their lives for the sake of the gospel in the final, great persecution under the Antichrist.

Thus it is incumbent on you that you pray for us that we may have the courage to stand for the cause of Christ; to preach sovereign, particu­lar grace and the glorious uncon­ditional covenant of grace; and to preach the antithetical life. Courage will be necessary as we approach the end, to be faithful preachers, even if the whole world rises up to snuff out the witness. 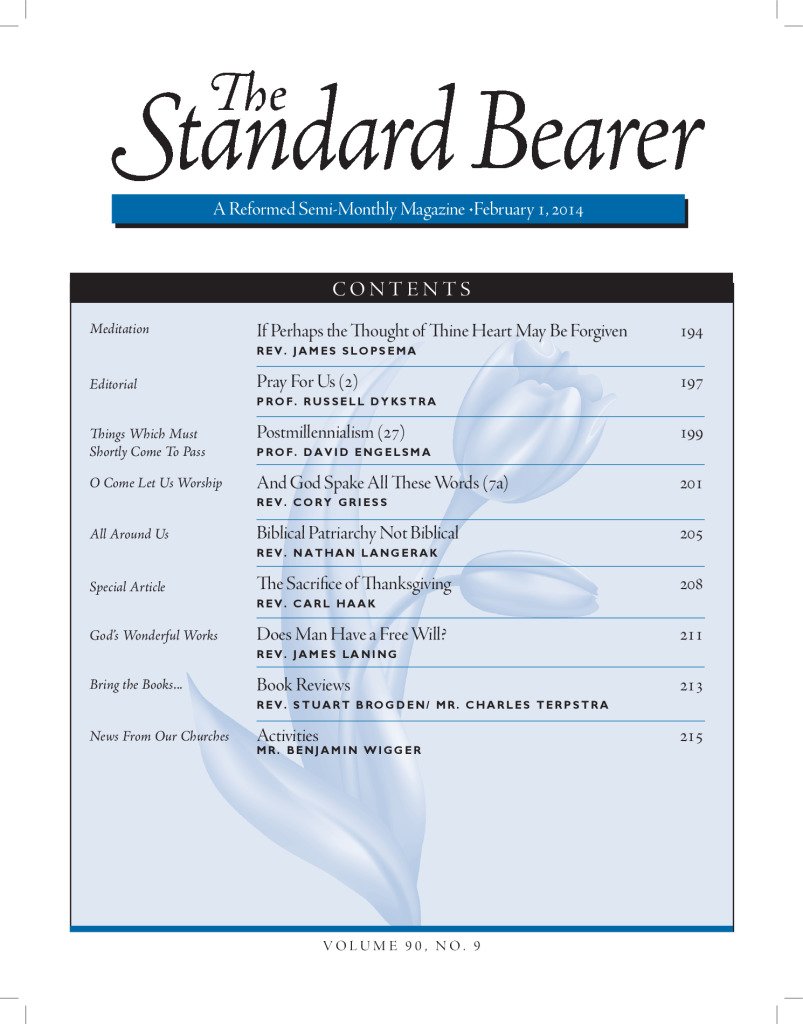