Already the question is widely discussed, what is to be done to the world after the war. That dark and difficult days are ahead, no one seems to doubt. That there is great danger of moral and economical bankruptcy most thinking men admit. That some kind of a new world-order will emerge from the present universal chaos, all recognize. That this new world-order will be one inaugurated by the democratic nations (to which Russia, too, belongs) is often taken for granted. And that this world-order that is to come will be based upon righteousness and brotherhood among all nations, is the slogan of all that raise their voice in this matter; but whether this will also actually be realized is to many a matter of serious doubt.

These are mindful of the motives of greed and covetousness, of .lust for power and revenge, that often dominate the demands of victorious nations at the peace-table; and they have not yet forgotten the treaty that was signed in the beautiful hall of mirrors in Versailles. And, so many Churchmen write about the problem of this new world-order that is to be established, and about the place and calling of the “Church” with respect to the founding and establishing of this order. On every hand suggestions are offered with regard to this calling of the “Church.” Exactly what is meant by the “Church” is not quite clear in these suggestions. The ideas that are expressed with respect to the question what the “Church” can do and should do for the reconstruction of the world after the war, are as vague as such ideas usually are. I was rather hopefully impressed, therefore, by the heading of an article that appeared in the Christian Century of May 20, 1942: “Begin With The Church!” Indeed, a man that dares to write under such a heading, might well strike the nail on the head. The Church needs reconstruction. And rather than concern herself with the reconstruction of the world, she might attend to her own housecleaning!

However, when I perused the article, I was sorely disappointed, for the writer has no idea of what the Church needs most of all, and, therefore, he does not understand how to “begin with the Church.” What we are looking for, thinks he, is a new and greater Kant, a mighty ethical guide and philosopher. He is confident that such a mighty leader will appear sooner or later to set the world straight. But in the meantime, and while we are waiting for this genius, we must do what we can to make the Church a mighty force for good in the world. The churches must be “swept with apostolic passion” for the Man of Galilee, the incarnation of love and the revelation of God, and for “his way of life.” Further the Church must rally all its forces to make the home once more the “creative center of spiritual nurture.” The Bible must be recovered and given back its true and rightful place in the spiritual education of the youth. And why? Because: “it contains the supreme literature of the ages!” And the different churches must unite without regard to creed! “How foolish it has been and still is,” thus the writer, “for us to let ancient creeds and hoary practices divide us as Christ’s followers into exclusive groups.” And so the writer pleads for a new type of church. It must be more united and cooperative. And it must become a practical force for good in the world. “Its Founder was a healer, a transmitter of love and good will. His way of life was inherently a transmission of love to little children and to all who suffered and were heavy laden. His test of fitness for the Kingdom was not a right theory about his nature, but the purveying of love to the least of his suffering brothers anywhere in the world.” And so this new church must itself be the “organ of the new order and the builder of the new world that is to be nearer to the heart’s desire.”

It is evident that this new “church” into whose communion the writer would draw all churches, and for the sake of whose fellowship he would urge them to forget and to forsake their creeds, is a church without the Christ of the Scriptures, without the cross and the resurrection, without vicarious atonement, without irresistible grace, without the Bible as the Word of God, without the Gospel of salvation, without either authority or power in the world! Even if it were possible for any church to reconstruct the world and to found a new order on the basis of righteousness, the new type of church described in its main features above would certainly lack all the necessary qualifications for such a task. It is like the world it would reform. It is salt that has lost its savor. Poor, deluded church!

But the true Church that fulfills its calling preaches the Word, “whether they will hear or whether they will forbear.” And the new order will not be established until Christ comes to make all things new. 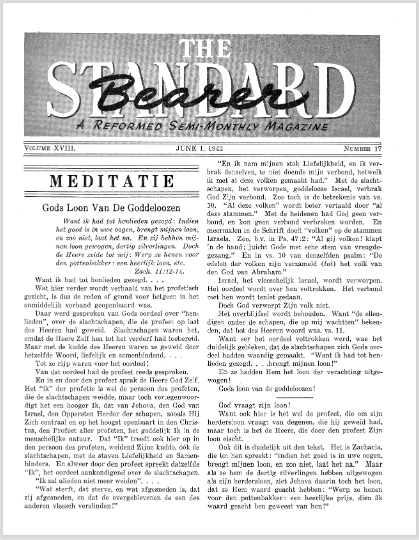