Decorating the cover of the Agenda for the 1967 Synod of the Christian Reformed Church is the proposed denominational seal. And occupying first place in the Agenda is the Report of the Denominational Seal Committee. As said report also puts it, in the center of this proposed seal is a TULIP. Moreover, according to the report, “The tulip in the center of the design refers to the well-known version of the ‘five points of Calvinism’ elaborated by the Synod of Dordt: Total Depravity, Unconditional Election, Limited Atonement, Irresistible Grace, Perseverance of the Saints .”

This is, of course, strictly a symbolic, Calvinistic tulip. For a real tulip has six petals, not five.

And, according to the Editor of De Wachter, this TULIP is an ezelsbruggetje, â”€ or, more refinedly put, a pons assinorum. In plain English: an ass’s bridge,â”€ only a picturesque term for mnemonic, or memory aid.

Hence the title above this editorial: An Ass’s Bridge in the Ecclesiastical Seal!

Now I might have some objections to this proposed seal. But I would not object to this TULIP because, as I indicated before, I never think of it in terms of an ass’s bridge. To me it is a very beautiful flower. However, I can imagine that the Editor of De Wachter was not a little perturbed at the sight of this “pons assinorum” decorating the cover of the Agenda, and that too, even before it has been adopted by Synod.

But this leads me to proffer him some advice, even though in his editor’s capacity, at least, he does not relish unsolicited advice. For the Editor of De Wachteris also a delegate to the forthcoming Synod. Perhaps he will not be on the committee that must serve Synod with advice about this seal; but in that case he can give his advice from the floor, and perhaps even put it in the form of a motion. I would not, however advise that the matter of the adoption of this denominational seal be made to hinge on such a trivial question as that of an “ass’s bridge,” or mnemonic. For after all, that is not such a basic matter. It hardly merits the editorial attention it received in De Wachter especially not when the Christian Reformed ship is being rocked by winds of false doctrine and liberal ecumenicism.

Whether the matter of this seal is treated before or after the “Dekker Case,” I would advise the Editor ofDe Wachter to make a motion somewhat as follows:

“Synod declares that the proposed denominational seal is not acceptable because it does not truthfully represent the doctrinal position of the Christian Reformed Church, due to the symbolism of the tulip in the proposed seal. Grounds:

“1. There is a large segment of our denomination which openly denies the doctrine of Limited Atonement represented by one of the petals of this tulip.

“2. There is another large part of the denomination which covertly denies the doctrine of Limited Atonement, who, even though they will speak of a certain Limited Atonement, nevertheless do not believe that the atonement is limited in its nature. Moreover, they compromise and in effect deny this doctrine: a) By claiming that there are benefits of the atonement which accrue to all men. b) By claiming that the term “world” refers to “an undifferentiated totality.” c) By making the preaching of the cross (particular atonement) a general and well-meant offer of salvation on the part of God to all who hear.

“3. There are many representatives of our denomination, both in the seminary, on the mission field, and in our home pulpits who maintain that the atonement is general, not limited.”

The above suggested motion has this to recommend it, that it is truthful, and that it would avoid the problem of the ass’s bridge at which the Editor of De Wachterstumbles.

Perhaps Synod could also serve its committee for a Denominational Seal with some positive advice. In that case it could suggest that the committee seriously consider the possibility of placing in the center of the design a Janus-head, or perhaps a bust of James Arminius.

Lest any reader think that I am being facetious in this editorial, let me assure you that I am in dead earnest! To date I have seen no evidence that any Christian Reformed leader holds 100% to the doctrine of Limited Atonement and to the whole of the Five Points of Dordrecht. I believe, therefore, that to adopt a denominational seal with this beautiful TULIP in the center of the design would be a piece of ecclesiastical hypocrisy. And hypocrisy is an abomination to the Lord! Only if the Christian Reformed Church would repent and return to the Reformed heritage would it have the moral right to include this TULIP in its seal! 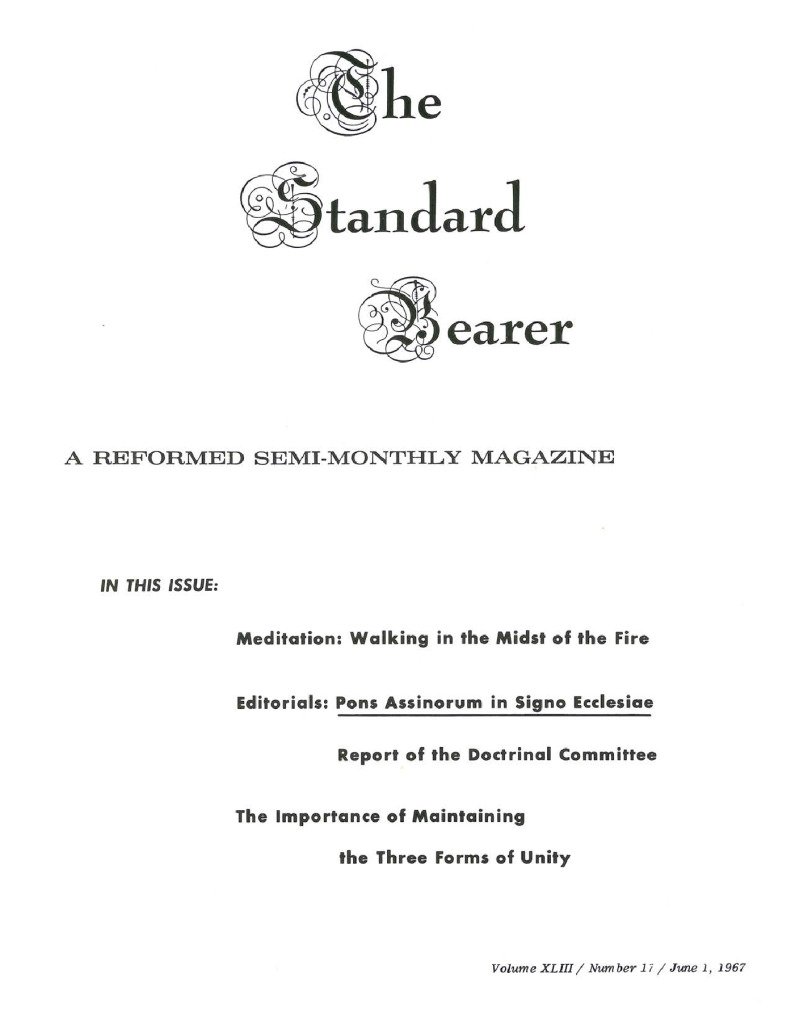