Without difficulty one can enumerate many items which point to the truth of this proposition. The trouble is, perhaps, that we ourselves become so accustomed to living in such an environment and such a culture that we frequently do not stop to consider it and to evaluate it.

Item—Stand at the intersection of Torrence Avenue and Interstates 80 and 94 on a late afternoon on Friday. Observe the thousands of cars streaming out of metropolitan Chicago bumper-to-bumper and three abreast. Where are they going? To Michigan to seek pleasure. You can observe the same phenomenon on the Tri-state Tollway northbound or on the Northwest Tollway, except that there the thousands of hurrying and impatient vehicles will be driving toward Wisconsin. Forty-eight hours later you can observe them streaming back toward Chicago at the latest possible moment, sated with a weekend of pleasure. Item—Count, if you can, the hundreds of thousands who jam the football stadium of a large university or a smaller college on a Saturday afternoon. Or add up the millions who throng to the Sunday doubleheader of the big league baseball teams throughout the summer. Or tally up the millions of fans (that’s an abbreviation for “fanatics”) who walk .through the turnstiles to see a professional football team in action. Add to this the millions who have their eyes glued to the television screen or their ears to the radio.

Item—Check the schedule of your local television station. Add up the hours devoted to news programs or programs which can at all be classified as educational; then compare the hours upon hours devoted purely to entertainment. Or turn on your radio. Exclude the few all-news stations or all-religious stations. What do you find when you turn the dial? Station after station which does virtually nothing but din rock music, country-western music, or just plain jazz into your ears.

Item—Observe the fact that most of our legal holidays have been moved to Monday-observance. Why? To provide a three-day weekend which can be devoted to more pleasure-seeking.

Item—Observe the fact that labor is pressing for a four-day work-week. Why? To provide more free time which may be devoted to pleasure-seeking.

Items such as these may be multiplied. These I enumerated offhand.

I have mentioned them, bear in mind, not because I intend to discuss the right or wrong of any of the forms of entertainment mentioned above. I have mentioned them as symptoms, evidences, of a certain mode of life, a certain attitude, a certain madness which characterizes our culture and which infects all of life in our country. That I mention our country does not mean that I exclude others which could fall under the same judgment; but I know our own country from firsthand and extended observation. I would hazard a guess that the same thing could be said of many other lands: their culture is characterized by pleasure-madness, and that, too, usually in direct proportion to the degree of affluence.

What, we may ask, are the characteristics of this pleasure-madness?

In the second place, they view the world as a playground, as their playground. If it does not in its natural state offer them enough variety of pleasure, they will use it and bend it and shape it, employ its powers and its resources, as well as the inventive genius of their fellowmen, all in order to achieve one goal: more enjoyment of a greater variety of pleasures, all for the satisfaction of their carnal, pleasure-mad nature.

Ask the child of the world what he wants out of life, what he aims at. He will tell you that he wants enjoyment. He certainly does not look at his job as being a God-given station and calling in life. He does not even look at it as a mere means to provide daily bread for himself and his family. No, he wants more, much more. He wants some enjoyment out of life. He wants a good, comfortable home. He wants a car. He wants a recreational vehicle. He wants a boat. He wants a summer home. He wants sufficient money to go on a long and expensive vacation-trip. He wants, wants, wants—always more. And he wants time to enjoy all these things. He is compelled to work, at least enough so that he can adequately finance his pleasure-seeking. But his work is not in any sense the main thing. It is secondary: it stands in the service of his pleasure-seeking. That explains the fact that he clamors for a shorter work-week—with the same, or higher, wages, of course. That explains the fact that his union-contract must stipulate a goodly number of paid holidays, as well as an ever longer paid vacation. If he can possibly manage, he will arrange, too, for an early retirement—again, with adequate pay—so that then he can devote all his time to enjoying life; to pleasures.

Such is the striving of the wealthy and of the middle class.

Such is also the striving of those who live at the so-called poverty level. The haves want more. The have-nots want to graduate to the class of the haves.

What is your attitude, child of God?

No, I am not first of all interested in the legitimacy or illegitimacy of certain forms of pleasure. I surely would not deny that there is a proper place in the life of a child of God for recreation and relaxation.

But my concern is with attitudes, with your outlook on life.

It is plainly evident that such an attitude will make a radical difference.

More about this later. 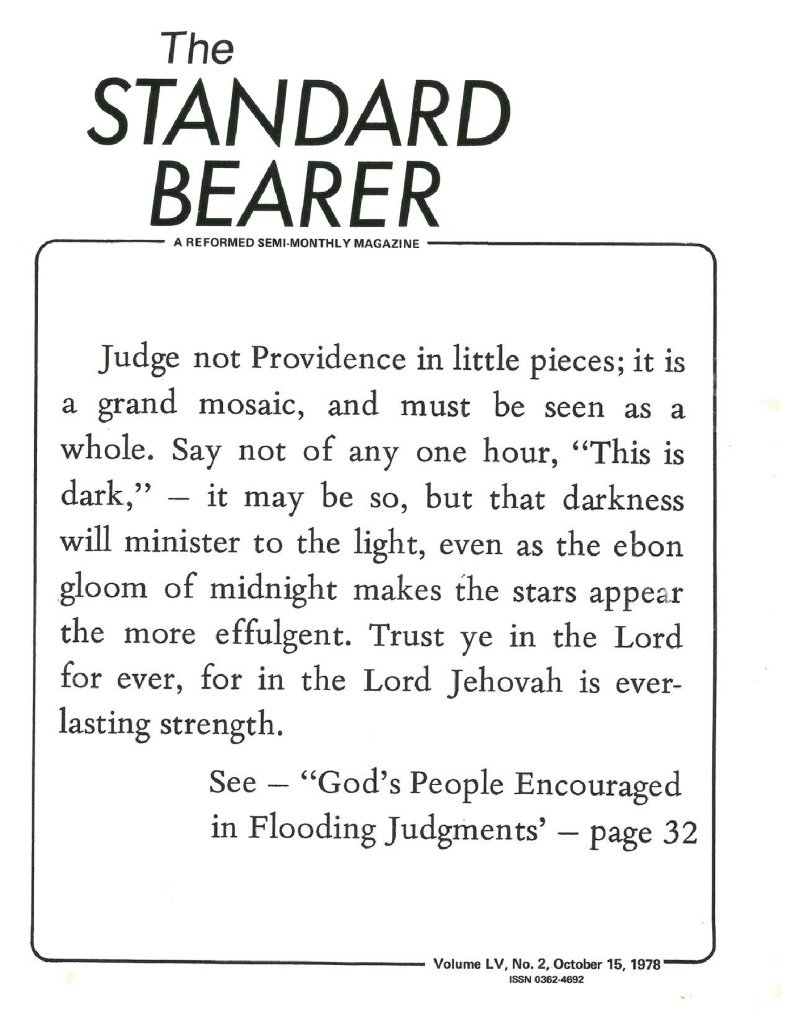