Petition for Pardon in the Congregational Prayer

Petition for Pardon in the Congregational Prayer

“Is it the calling of our ministers or elders to ask for “forgiveness of sins” in the congregational prayer or in any prayer? Should sin not be specifically mentioned and God’s merciful forgiveness implored?”

As our reader undoubtedly knows, there are no rules or regulations in this regard in our Church Order or anywhere else. This is because the New Testament Scriptures recognize the fact that we are led by the Spirit, so that we need no one to teach us how we should walk according to the liberty wherein Christ has set us free. But the reader also feels that confession of sin and a plea for forgiveness is as essential to our worship service as the reading of the law, the customary Psalm of penitence, and. Psalm of praise. With this I can agree.

In the Old Testament, which gives us a pattern of things to come, we read of the altar of burnt offering as having a prominent place in the temple worship. This altar stood between the people and God, that is, between the outer court and the Most Holy Place, where God symbolically dwelled in the ark of the covenant. The only access to God was through the altar, that is through the atoning sacrifice for the sins of the people, which always pointed to Christ. Daily sacrifices were brought for the sins of both the individual and the congregation, as is mentioned inLeviticus 4:13-21. On the Sabbath day and the feast days a special offering was brought (Num. 28:9, 10). These offerings might never be brought, whether for the individual or for the congregation, without confession of sin and a sincere repentance, as the altar and the sacrifice signified. According to Alfred Edersheim in his Temple, the sin offering took place at the very time when the priest presented the prayers of the people to God by pouring incense upon the hot coals that lay on the altar of incense in the Holy Place, before the veil.Hebrews 13 tells us that we have an altar, Jesus, Who suffered outside the gate, that He might sanctify the people with his own blood (Heb. 13:10-12).

Thus we read in Hebrews 10:19-22: “Having therefore, brethren, boldness to enter into the holiest by the blood of Jesus, by a new and living way, which he hath consecrated for us, through the veil, that is to say, his flesh: and having an high priest over the house of God: Let us draw near with a true heart in full assurance of faith, having our hearts sprinkled from an evil conscience, and our bodies washed with pure water.”

Thus Paul writes in Ephesians 2:18: “For through Him (Christ) we both have access by one Spirit unto the Father.” See also Eph. 3:12.

According to our Heidelberg Catechism three things are necessary for us to know, in order to live and die happily in the one and only comfort. These three are the well known knowledge of our misery, knowledge of our deliverance, and knowledge of true thankfulness. Also our Baptism Form and Form for the celebration of the Supper of our Lord include these three. Should they not be included in our prayers?

Having lived through the great Reformation, our fathers were deeply aware of their sin and the need of forgiveness. Our Confession of Faith, or Belgic Confession, asks in article 14, “Who will glory in his own will, who understands that to be carnally minded is enmity against God? Who can speak of his knowledge, since the natural man receiveth not the things of God? In short, who dare suggest any thought, since he knows that we are not sufficient of ourselves to think anything as of ourselves, but that our sufficiency is of God? Therefore what the apostle saith ought justly to be held sure and firm, that God worketh in us both to will and to do of his good pleasure. For there is no will nor understanding conformable to the divine will and understanding, but what Christ hath wrought in man: which he teaches us, when he saith, without me ye can do nothing.”

Article 15 of the same Confession warns that children of God should never rest securely in sin, “but that this corruption should make believers often to sigh, desiring to be delivered from this body of death.”

The fathers at the Synod of Dordt, defending the doctrine of the Perseverance of the saints (Fifth Head of Doctrine), declare in the first article: “Whom God calls, according to his purpose, to the communion of his Son, our Lord Jesus Christ, and regenerates by the Holy Spirit, he delivers also from the dominion and slavery of sin in this life; though not altogether from the body of sin, and from the infirmities of the flesh, so long as they continue in this world.”

Whereupon they add in the second article: “By reason of these remains of indwelling sin, and the temptations of sin and of the world, those who are converted could not persevere in a state of grace, if left to their own strength. But God is faithful, who having conferred grace, mercifully confirms, and powerfully preserves them therein, even to the end.”

And then in article 4, “Although the weakness of the flesh cannot prevail against the power of God, who confirms and preserves true believers in a state of grace, yet converts are not always so influenced and actuated by the Spirit of God, as not in some particular instances sinfully to deviate from the guidance of divine grace, so as to be seduced by, and comply with the lusts of the flesh; they must, therefore, be constant in watching and prayer, that they be led not into temptation. When these are neglected, they are not only liable to be drawn into great and heinous sins, by Satan, the world, and the flesh, but sometimes by the righteous permission of God actually fall into these evils. This, the lamentable fall of David, Peter, and other saints described in Holy Scripture, demonstrates.”

The underscoring in each case is mine. I have quoted rather extensively from Scripture and the Confessions, not because we do not know these things, but rather as a much needed reminder. Never in all the history of the church have the believers, young and old, been so openly and brazenly confronted with temptations. The opportunities to sin are greater than ever. The remark is often made that our young people are subjected to far severer trials than we older folk ever experienced. But temptations are limited to no particular age. We all face them daily, and that in a time of spiritual laxity and complacency! The world round about us is busier than ever in filling the cup of iniquity by their bold defiance of all God’s laws and ordinances. In that world we live from day to day. The churches in many instances no longer brand sin as sin, but condone evil by referring to it as an innate disease or sickness. The sinner should receive sympathy, rather than being condemned and disciplined by the church. We sons and daughters of the living God come in contact with all that corruption six days a week. On the sabbath we seek our refuge among the saints, where the Spirit dwells and Christ works through His Word. We escape from all the evil round about us, deeply aware of our own sins and guilt, eager to confess our sins, to unburden ourselves from our guilt, and to be. assured of the mercies of God, as Christ declares to us, “Go in peace, thy sins, though ever so many, are forgiven thee.” Only with that assurance, and strengthened by the ministry of the Word, are we ready to face another week of struggle against the onslaughts of evil and the Evil One. This makes our confession, “I believe the forgiveness of sins,” a reality in our lives.

It is well for all of us to keep this in mind. 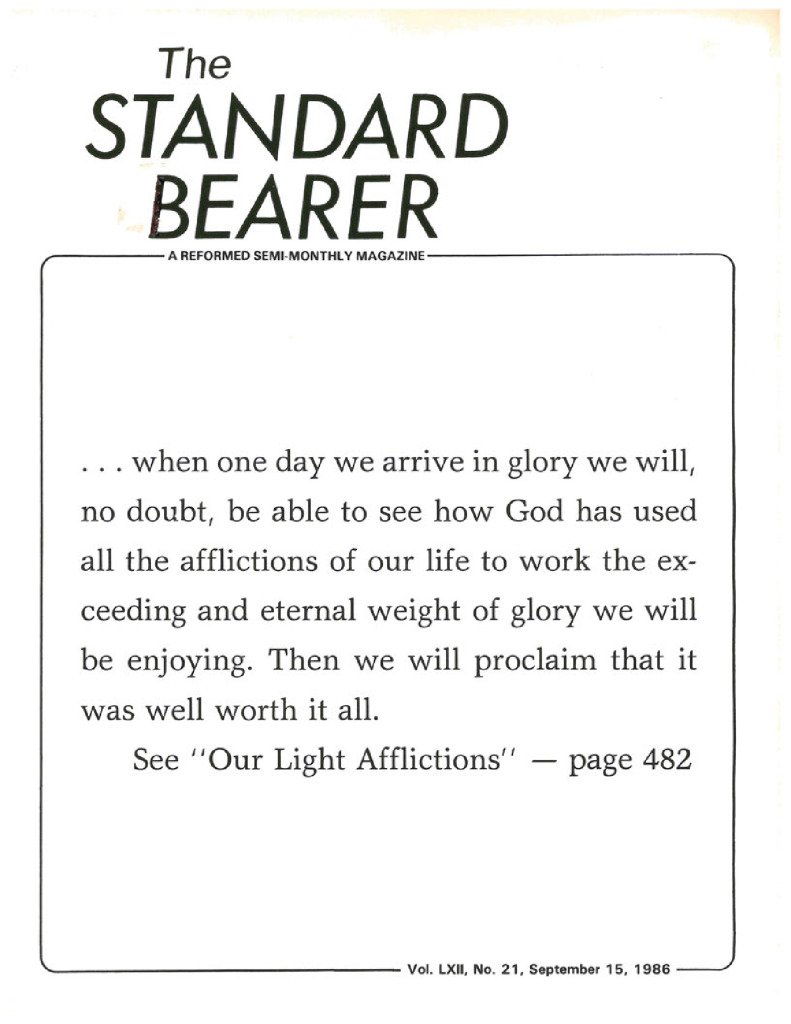