Persecution and the Church Today (2)

Persecution and the Church Today (2)

“Yea, and all that will live godly in Christ Jesus shall suffer persecution.”

We continue our consideration of the matter of persecution in this present day. It is the contention of the writer that a form of persecution is directed even today towards every Christian who is resolved to live consistent with his confession, and that it serves as a threat to dissuade men from living godly. The world has its evil way of persuading people to march to its tune. And, especially, pressure is brought to bear upon members of the church to compromise their principles, adapting the world’s practices. So effective has this pressure been in the last generations that in many instances the church has become nothing more than the voice box of the world, giving a religious veneer to spiritual rottenness, covering that which stinks of sensuousness with high-sound prating about “redemption.”

It is a mistake to imagine that only the teenager has to contend with peer pressure. As adults as well we are under immense pressure to adopt the world’s standards, doing what it deems sensible, thereby forsaking spiritual distinctiveness (which is, after all, the world’s goal). And we as adults can be as greatly swayed by this pressure of society to yield to her dictates as are teen-agers.

In this connection, let us use one prevalent example: the number of children a family has. I can think of few places where greater pressure is placed upon a young couple to conform to the world’s “wisdom” than in this area. This pressure is not without its effect, I think. Surely it is not my imagination that the size of the family in the church has, on the average, shrunk in the past generation. It is not considered to be in good taste to have anywhere from six to a dozen children. Once families of such size raised no one’s eyebrow; now they raise protests and rebukes, even from within the church. Those who have such sized families are considered foolish, with a tendency towards immorality. According to today’s definition promiscuity describes not sex out of wedlock but the legally married mother of eight children. (Just ask some young married mother, pregnant with her fourth child of a six-year marriage sitting in the doctor’s office waiting for an appointment while the nurses cast incredulous glances in her direction, whispering all the while.) One is afraid of seeing one’s obstetrician, for fear of being bawled out for not using one’s intelligence. Having many children is associated with being poor and ignorant. Who wants to be classified as such? And so we are tempted to yield.

I submit to you that the “zero-population growth” movement is nothing else than an expression of Satan’s enmity against the “seed of the woman.” Now, it can be argued that the world does not single out the church in its promotion of “planned parenthood,” but tries to persuade every segment of society of such wisdom. Nonetheless, I doubt very much whether Satan cares how many “brats” the world brings forth or how great a burden they are for society. The real object of Satan’s enmity is always the church and her “brats.” He simply uses the world to exert pressure upon the church, and causes her to resent the church for her resolve to continue to have houses filled with children despite the warnings about the grave consequences of over-populating this planet. Revelation 12:17 states that the dragon (Satan) was wroth with the woman (the church), and went to make war with the remnant of her seed. This means that throughout the N.T. age he has been seeking to exterminate the elect church. I can not imagine that he complains too loudly if believers do not bring forth as much “seed” as they once did. The fewer to exterminate. But I digress. The point is, the disgust which we expect to confront us if we have large families is a large factor in causing us to hesitate to do anything else than to pick a low number and limit our family size to that, knowing that it is in the accepted bounds of “good taste.” Oh, how I loathe that phrase “good taste.’ ” There has more evil crept into the lives of the saints in the name of “good taste” than by means of any five heretics you care to name. For woe to the one who transgresses this standard. You make of yourself an undesirable.

As has been implied, persecution today takes the form of reproach, name-calling in the sense of attaching a certain label to those characterized by peculiar or undesirable practices. Now, this name-calling is not a severe form of persecution. In a prison camp I would much rather have the inquisitor call me a long list of despicable names than to proceed to pull out my fingernails. But in everyday society our perspective is oddly altered. Let us not underestimate the powerful effect name-calling in all its forms has upon us. There is an old adage that runs, “Sticks and stones will break my bones, but names will never hurt me.” The world knows that nothing is really further from the truth. There is nothing that a man cherishes more than his name and reputation. You can hurl a hundred stones and give me forty lashes with a stick, and you will not touch me so near the quick as when you insinuate something derogatory about my views and character. Scorn and derision can be the most frightful of persecution. In order to escape any stigma for our distinctiveness we are inclined to conform.

The power of the word of reproach and accusation is much in evidence today. Think of the tremors set off by that one word “discrimination.” The merest suggestion that he is bigoted, prejudiced, or chauvinistic will bring the most callous politician quickly to heel. These words carry a terrible stigma today. Murderers and perverts are more favorably countenanced than those accused of discrimination in some form.

The charge of discrimination has had tremendous repercussions in the church. I am thinking not so much in terms of race, black and white, but of gender, male and female. The whole matter of the proper relationship between male and female has become a matter of debate and friction. The result has been a retreat from the historic Christian position. The historic position (that is to say the Scriptural one) is the authority of the male over the female in home, church, and state. Many in the church take the lead in denouncing this as unchristian and the position of infidels.

The question is, what is it that persuades unspiritual men of the church who are by nature self-seeking, to surrender authority to the woman and to champion so vigorously the cause of those who maintain that it is Christian to grant headship to the woman according to her desire? It can only be that the fear of reproach and incrimination outweighs their inclination to dominate. They want the applause of men. Church officials can not bear the thought that society might label them as “chauvinists” and “tyrants,” and identify them with “self-seeking, self-serving, religious bigots” of bygone centuries. They would rather deny the authority of Scripture than have a group of leather-lunged women accuse them of discrimination. So they champion the cause of those who agitate for granting women the right to vote, hold office, preach, and even exercise discipline in the church. Such surrender at the mere threat of “getting a bad name” in society is widespread.

At the moment, by the grace of God, our churches have not wavered on this matter. For that we can be thankful. But are we immune? How do we personally withstand the pressure in our domestic relationships? Are our women willing to admit publicly that they intend to keep silent in the church and be in all subjection to their husbands, because such is right? Or does the thought bring acute embarrassment or maybe even resentment? As men we are supposed to feel guilty for insisting on headship. Do we earnestly exercise our full responsibility in the home, insisting upon it in love for God, or have we made various concessions, lest we appear to be too domineering? Who wears the pants? More and more the odd couple is the pair where the man does so with the woman’s full approval and encouragement. The question is very simple and pregnant with implication: to whom are we going to yield? to the world or to the Word?

Dislike of reproach, while being a reason for our being conformed to the world in various ways, is never anexcuse for denying the practical principles of our faith, no more than the threat of the rack was once an excuse for denying the Reformed faith and being reconciled to Rome again. The persecution we bear is nasty and unenjoyable, but is it severe and unbearable? Does it begin to compare with what the saints endured according to Hebrews 11, or the Dutch Protestants under the Duke of Alva? Is what people think of us THAT important?

If we can not endure the Devil’s sneer, or being despised by those under his spell, how shall we endure when his sneer and snarl turns to actual attack, wounding us to death? Is there any reason to suppose that the soldier who gives ground when the enemy merely taunts him and maybe threatens him, that such a soldier will stand his ground when the fierce battle is actually joined and one’s life and that of his family is endangered? The soldier who gives ground now already will be severely tempted to surrender unconditionally when it is neither popular nor safe to insist on living the antithesis. Now is the time to take a firm stand; waiting until tomorrow can only mean we have yielded another step. “Hold that fast which thou hast, that no man take thy crown” (Rev. 3:11). 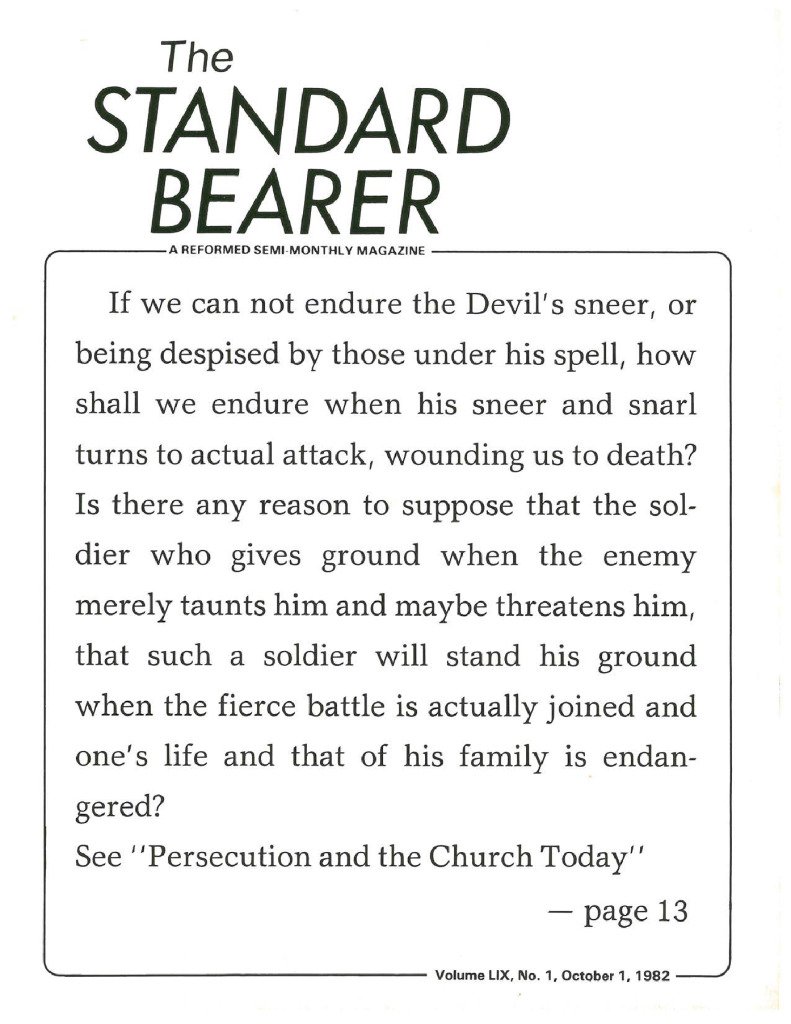