And if Christ be not raised, your faith is vain; ye are yet in your sins…. But now is Christ risen from the dead, and become the firstfruits of them that slept. I Corinthians 15:17, 20

Our lives are filled with uncertainty. So many changes take place, many of them unexpected. So many of our plans fall to pieces. So many of our hopes are dashed. And, frequently, we are considering and pondering different possibilities and scenarios. What if…? What if…? All sorts of hypothetical situations—some of which may cause much worry, anxiety, and fear.

But the scenario that the apostle Paul holds before us here is the most dreadful, the most horrible possibility that we could ever imagine! Did you ever ponder this: What if Christ be not raised? As God’s children we spontaneously respond, “Perish the thought!” This expression or idiom expresses the urgent desire that what was just mentioned would never be. It means: Do not ever consider thinking such a thing!

“And if Christ be not raised”—perish the thought! Yet Paul would have us contemplate this horrible notion, not to raise doubts or fears in our hearts and minds, but so that we may again rejoice in the glorious significance of Resurrection Day! May the wondrous truth of Christ’s resurrection fill us with joy and gladness!

Think about it, then. What a horror it would be if Christ remained in the cold clutches of death and the grave! “And if Christ be not raised, your faith is vain”! That means that our faith in Christ as our Lord and Savior is empty, without any validity, without any value or relevance. It is unprofitable; our faith does us no good. Our faith is in Christ; and if He be not raised, He is not able to do what we expect Him to do. Our faith in Him is worthless.

For if Christ be not raised, “ye are yet in your sins.” That means that we are guilty and remain guilty! We stand condemned. The only possible verdict that God, the Judge of heaven and earth, can give is: GUILTY! And then we are worthy of everlasting desolation—that must be our only end. For God is the perfectly righteous Judge. He cannot overlook our sins. If we are yet in our sins, He sees them. He cannot deny His own righteousness. We stand before Him without excuse, liable only to the sentence of death, everlasting death. For to be yet in our sins means, first of all, to be yet in our guilt.

Our justification—God’s declaration that we are innocent and righteous in Christ—rests solely upon the resurrection of Christ, as far as its certainty is concerned. If Christ be not raised, the blood of the Lamb is of none effect. For Christ is our Head; He represents us legally. He went to the cross for us, in our place. He bore the burden of God’s wrath as our representative. It was to make satisfaction for our debt of guilt that He poured out His soul unto death. It was to merit for us and all His people the right to eternal life and all the blessings of salvation that He willingly suffered and died upon the accursed tree. If Christ succeeded; if He really paid the price; if He actually bore the burden of God’s wrath to the end; if He really made satisfaction for sin and merited for us righteousness; if it is, in fact, true as He cried, “It is finished,” then He must receive life again as our Head!

But, as children of God, we believe and confess that we are delivered from the power of sin and death by our risen Lord. We confess that from our living Lord we receive the principle of resurrection life in regeneration. We believe that because of our union with a living Lord we begin to live lives controlled and directed by the love of God. We believe that the power of sin and death was broken forever when Christ died on the cross and arose again the third day.

But if Christ be not raised, then all of this is not true! Then our faith is vain. Then we are yet in our sins also in the sense that we are still in the power of sin and death. For deliverance from sin, our sanctification, presupposes redemption from guilt. If Christ has not removed our guilt, we have no legal right to be sanctified. If we have not been redeemed, then we have no right to be delivered. We cannot possibly be delivered from sin if Christ be not raised.

For, you see, our new life, our deliverance, our sanctification rests in unity with Christ. He is the vine; we are the branches. He is the Head, and we are the members of His body. We live out of Him, therefore. And if Christ be not raised, He is dead! And if the vine is dead, the branches are dead! And if the Head is dead, the body is also dead! Yea, we are also dead! We are yet in our sins. Perish the thought!

There is one more element that we must consider. If Christ be not raised, and “if in this life only we have hope in Christ, we are of all men most miserable” (v. 19). You have hopes, do you not? Not just for the here and now, but hope for the future that lies beyond death and the grave? The hope of that day when we shall be raised up out of the dust and shall stand body and soul in the glory of the new heaven and the new earth. Is this your hope? If it is, you seek the things that are above. If it is, you are willing to suffer for Christ’s sake. You are not afraid to be reproached and hated and persecuted. And that will be our experience, to one extent or another, for Christ’s sake, in this present life.

But if Christ be not raised, then this life is all we have! Then our hope for the future is but a puff of vapor in the frosty air that quickly dissipates. It is a mere dream that fades away. Our hope is simply a figment of our imagination. Our faith is vain! Then death is the end; the grave has the victory. What is worse, then we perish forever when we die. If that is the case, we might just as well follow the world’s motto: “Let us eat, drink, and be merry, for tomorrow we die.” If our hope in Christ is only in this life, we are of all men most miserable!

We would be most miserable because Christ would not now be seated at God’s right hand. Christ would not have received all power in heaven and on earth. Christ would not receive us into glory with Him when our earthly life is over. Then He would never come again. Then the resurrection of the body would never take place. Then there would be no new creation, no everlasting life. If Christ is yet in the grave, then the grave is the door to hell for us. If Christ be not raised, then we are losers, awful losers. And Christ Himself is a loser and a forlorn, would-be Savior. And all of the souls of the saints from Abel onward must be cast out of heaven! For “then they which are fallen asleep in Christ are perished” (v. 18). Think of it. If Christ be not raised, our faith is vain; we are yet in our sins; we are of all men most miserable. Perish the thought!

But the inspired apostle asserts, “But now is Christ risen from the dead!” Thank God, Christ arose! Let that thought sink into your soul! That means our faith is not vain. We are not yet in our sin and guilt. We are of all people the most joyful, the most blessed!

Always the enemy seeks to rob us of our faith and comfort in the resurrection. Already from that very third day when Christ arose men have denied the truth of the resurrection. The evil one knows how vital this truth is to the Christian’s faith. Today, too, that is the case. And the unbelieving world and the apostate church insist that Christ’s resurrection simply was not possible scientifically. They seek to hide the resurrection under the wrappings of carnal celebration.

But let there be no doubt in your mind and heart—Christ arose! And the Lord has taken care that the fact and reality of the resurrection are established by faithful witnesses, yea, by many infallible proofs. Many were the witnesses of this risen Lord, and they all testify that they did not expect the resurrection. They did not expect the risen Savior. Just ask the women who went to the tomb with their spices that resurrection morning. It was the farthest thing from their thoughts. Just ask the grieving disciples whether their hearts were not thrilled at the sight of the risen Lord when He suddenly appeared in their midst. Yea, He was seen of more than five hundred brethren at once! And Paul himself proclaimed the gospel of our risen Lord as an eyewitness of His glory. Many witnesses beheld the risen Lord. Because of that, the apostles made the resurrection the heart of their preaching. Mind you, they were willing to seal their confession with their own blood!

Rejoice, for Christ is “become the firstfruits of them that slept!” Our God beholds us from heaven, with His risen and glorified Son at His right hand, and declares: “Not guilty!” We are righteous in Christ. We are no longer in our sins, but in Christ and clothed in His righteousness. We are heirs of God and joint-heirs with Christ of all the glories of His kingdom. And we know that the risen Lord is but the firstfruit of a great and glorious harvest. We, with all those whom the Father has given Him, shall be raised and ushered into His kingdom.

The only doubt of the resurrection of Christ is the doubt of unbelief. The Lord is risen indeed! Believe it! Believe it and repent of your sins! And walk, then, in newness of life. Rejoice in the glorious hope we have in our living Lord! It is a hope that maketh not ashamed! It is a hope of everlasting life and glory! It is the hope of Christ’s return! A life of joy and gladness is ours without end. 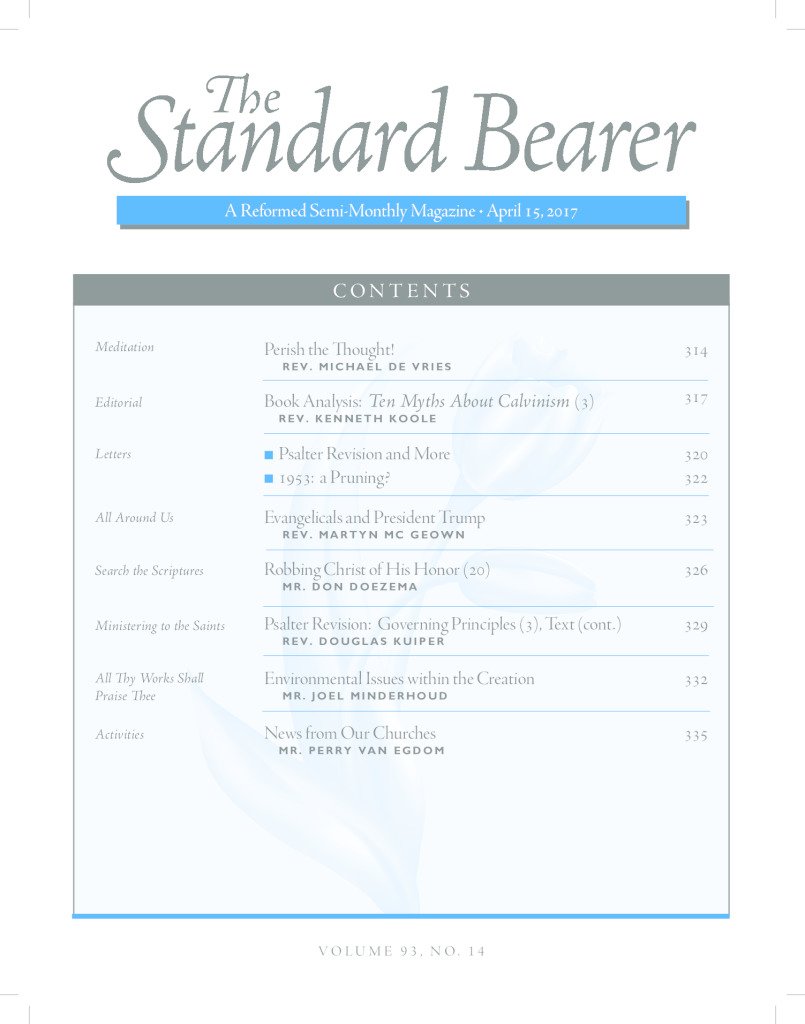