In The Presbyterian Guardian of December 10, we found a “Declaration issued by the Japanese Reformed Church”, excerpts from which we present below. The following note accompanies the article: “It is to be remembered that this is the action of a group of Japanese Christians, who have been out of touch with missionaries for a number of years as a result of the war. It therefore represents a witness from within Japanese Christendom. . . . The best English form of the name seems to be ‘Reformed Church of Christ in Japan’. Its relation to and distinction from the KYODAN, or ‘Church of Christ in Japan’ is thus made clear.

“The text given here is the result of the combined efforts of Major Lardner Moore, and the Revs. R. H. and W. A. Mcllwaine.”

“It is already nine months since the end of the war, and though the rebuilding of our defeated ancestral country is being planned according to various designs and ways, what the Scriptures say is true, ‘Except the Lord build the house, they labor in vain that build it; except the Lord keep the city, the watchman waketh but in vain.’ Apart from believing in the omniscient, omnipotent, most holy and most loving God, who rules over the universe .and mankind, even a whole nation has no way of being built well or preserved well.

“At the time of the recent great war, religious freedom was under severe pressure, and our church was perverted; and the truth was not boldly insisted upon. We were ashamed of, this before God’s holy presence, and mourned for the nation. However, by the providence of God Who controls history it has finally come about that through defeat freedom of religion has been realized in Japan, our ancestral country.

“Henceforth, for the building of a better Japan, we must with true hearts and true purpose become people who are in accord with the will of the omnipotent and most good God, who controls history. In accordance with His commandments we must revere God and love our neighbor, not merely in the realm of (the human) spirit and culture, but the injunction ‘Whether therefore ye eat or drink or whatsoever ye do, do all to the glory of God’ must be made our highest aim. It is this theistic life and world view that is the only sure foundation upon which to build a new Japan; this is the first point of emphasis of the Reformed Church of Christ in Japan, and we are zealous for this point. . . .

“Now mankind in God’s holy presence is one body, all equally slaves of sin. However God, according to His eternal purpose, has established a plan of salvation for sinful mankind, which He has accomplished in history by the historical atoning work of His Son Jesus Christ; He has given faith to and called those who were ordained to eternal life; and justifying, adopting and sanctifying them, He dwells with men. . . Then when the fullness of time was come, He sent forth His Son Jesus Christ, by whose death on the Cross, and resurrection, the foundation of our salvation is laid, by (His marvelous providence, through the unbelief of the Jews, the Gospel of salvation has spread to all the world. That is, the salvation of God emerged from the temporary Jewish racial setting of the Old Testament age and displayed its proper dignity of universality. Jesus Christ was proclaimed by the apostles as ‘the Lord of all peoples and the light of the world,’ and thus the existence of the New Testament Christian Church has come to be seen in all the world.

“The so-called ‘Invisible Church’ which God alone clearly knows, extends throughout all the earth; it exists as the holy, only, Catholic church through all history, past, present and future, connecting the realms of both heaven and earth.”

“We are zealous to stand in the true tradition of this Christian faith. Here (rooted in this tradition) is the purpose of the Reformed Church of Christ in Japan to adopt as its standard of faith the Westminster Confession of Faith together with the Larger and Shorter Catechisms, to which is attached the preamble given below.

Preamble To The Standard Of Faith Of The Reformed Church Of Christ in Japan.

“The Scriptures of the Old and New Testaments, which are the Word of God that He gave to His own Church, are the only infallible canon of the Church. The Word of God revealed in the Scriptures is formed into a confession of faith by the Church and becomes the standard of faith of the Church; this is the creed of the Church. The Church has from of old continued to hold in common to these four creeds: The Apostles’ Creed, the Nicene Creed, the Athanasian Creed, and the creed of Chalcedon, as the basic universal creed of the Church. Coming on to the age of the Protestant Reformation, the several reformed Churches stood in the tradition of the orthodox faith of all these creeds; moreover, not stopping with them, they were led on to draw up creeds that were pure and evangelical—nay, that while covering the whole realm of doctrine were in addition pure and excellently systematic. Among these thirty-odd creeds we are convinced that the Westminster Standards most completely set forth the system of doctrine taught in the Scriptures. Though we, the Reformed Church of Christ in Japan, look in prayer for the day when we may draw up in our own words something even more excellent, we are convinced that it is these standards of faith that are most appropriate for our standard of faith today; and so with praise and thanksgiving we make them the standard of faith of our church.”

“Referring to one Church government: believing that Presbyterianism is the form of government held by Biblical churches, we the Reformed Church of Christ in Japan desire to put this into practice in its purity.”

“What is the one good manner of life? We are not legalists, nor again are we antinomians. Sanctification, with which God the Holy Spirit blesses us within, on the basis of the redemption of Christ, is what the believer should earnestly seek in prayer. Perfect sanctification is not granted upon earth; though we daily seek the forgiveness of our sins and must not fail to forgive those who sin against us, we who are in Christ must mutually reprove in the Holy Spirit the sins of our brethren. It is a well-known fact that the church of Geneva, where John Calvin, the greatest leader of the Reformed Church which was the main tide of the Protestant Reformation movement, labored, set forth an exemplary accomplishment in the matter of discipline in the life of faith.

“Thus we desire through one confession of faith, one church government and one good manner of life to show forth the one invisible church as ‘One Visible Church’, and by this to be assured of the fact that we are a branch of the holy catholic church, and prove the certainty of our salvation.

A tentative plan for the merger of the United Presbyterian Church of North America and the Reformed Church in America has been drawn up by a joint committee of both denominations and has been submitted to both churches for their consideration. In presenting the plan, the joint committee emphasized that it was not sent for action or vote but for study and recommendation. After suggestions and amendments are received, the joint committee will revise and rewrite the plan, and the revised draft will be put before the General Assembly of the United Presbyterian Church and the General Synod of the Reformed Church at their meetings in 1947. If the two general organizations approve the revised proposal, it will then be submitted for vote to the classes and presbyteries. Results of their action then will be considered by the general organizations at their 1948 meetings. Approval by the lower bodies, it is believed, would lead to the general organizations’ forming a united assembly at which the new Church would be constituted. The new denomination would be called the United Presbyterian Reformed Church and would have an established membership of some 360,000.

Consummation of the union of the United Brethren in Christ and the Evangelical Church of America was accomplished at a uniting conference on Saturday, November 16, in Johnstown, Pa. Plans for the union had been under way since 1933 and have been fairly completed since 1939. Out of a total of one hundred fifty six votes cast on the matter of the union in the two churches, only eight votes were in the negative. The general offices of the new denomination, which is known as the Evangelical United Brethren Church, will be in Dayton, Ohio. The merged group is expected to have over seven hundred thousand members.

The move for union or reunion of churches and religious groups has also reached the Quakers. The Society of Friends was disrupted by a dispute concerning articles of faith and the use of the Bible in 1827, and since then there have been two groups, designated as the Orthodox and the Hicksite. Now, as the result of proposals made a year ago, the two groups have healed their breach and reunited. The Quakers are known today more for their benevolent activities than for their religious services. One of their leading institutions is the American Friend’s Service Committee, known around the world for its relief work during and after the war. 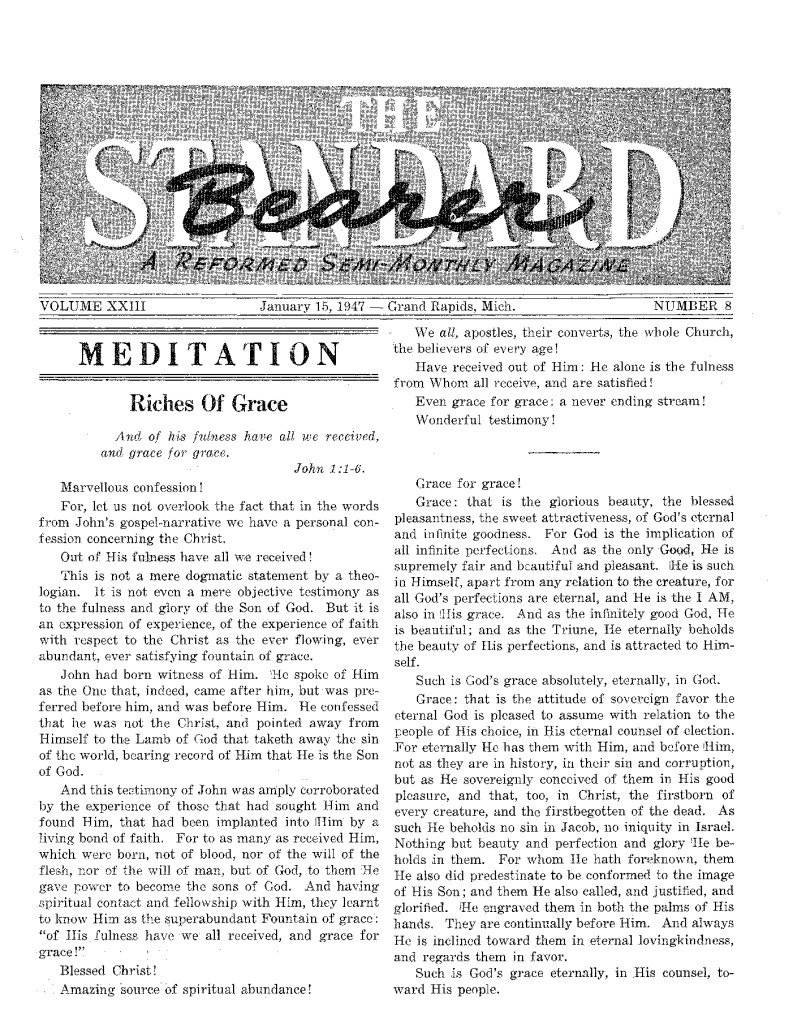