Passed from Death into Life

Passed from Death into Life

We know that we have passed from death unto life, because we love the brethren. He that loveth not his brother abideth in death.

Whosoever hateth his brother is a murderer: and ye know that no murderer hath eternal life abiding in him.

One of the themes of John’s epistle is that we love one another as brothers in the church.

This is especially emphasized in the preceding verses.

In verse 11 John reminds the church of the message that they had heard from the beginning—that they should love one another. This was the message both of Jesus and of the apostles.

In verse 12 John calls attention to Cain. Cain did not love his brother Abel but killed him. He did so because Abel’s works were righteous. Let none of us be as Cain.

In verse 13 John speaks of the hatred of the world for the church. We must not be surprised when the world hates us. But we must not hate one another.

Do you give clear evidence of having passed from death into life?

This passage speaks not just of life and death. The original speaks of the life and the death, indicating that these are dominating realities in the human race recognizable to all.

Let’s start with the death.

This death has dominated the history of the world, bringing untold misery and sorrow. Because of the spiritual aspect of death, mankind lives under the control of sin. This is a wasted life of trouble and sorrow. At the end of this miserable life awaits the pain of physical death and the horrors of hell.

In contrast there is the life.

This life is the life that God provides for His elect people in Jesus Christ.

There are several aspects to this life.

Second, this life is a life of friendship and fellowship with God. Those who are spiritually dead are estranged from God. As they devote their lives to sin and rebellion, they know only God’s wrath and judgment. In turn, those who devote their lives to God in love find the joy of intimate friendship and fellowship with God so that they live under His blessings.

Finally, this life is an everlasting life. The new life in Christ does not prevent physical death. But neither is this life lost in death. Death rips from us everything that we own, except the life that we have with God in Jesus Christ. In fact, death becomes a means to attain this life in richer measure. Through death our souls will be brought immediately to be with Christ in glory and to serve God in the perfection of heaven. And in the day of His return, our bodies will be raised by Christ and glorified, so that we can live with God forever in body and soul in a new creation.

John speaks of passing from death into this life.

This is possible only in Jesus Christ.

We cannot by our own efforts escape death to enter into life. God gave us over to death as punishment for our sins. None is capable of overcoming the guilt of his sin and its terrible consequence of death.

What is not possible with men is possible with God. God in His love delivers us from death. This is the testimony of John in his gospel and in his epistles. In I John 4:9 we read, “In this was manifested the love of God toward us, because that God sent his only begotten Son into the world, that we might live through him.” In his gospel, John writes, “For God so loved the world, that he gave his only begotten Son, that whosoever believeth in him should not perish, but have everlasting life” (John 3:16). From these and other passages we learn that God in His great love for His people sent Jesus Christ to the cross to deliver them from the power of death by making payment for their sins. This serves as the legal basis for their escape from death. Escape from death actually takes place through the spiritual rebirth of which John speaks so much. God transforms His people into His own image, so that they love and serve Him with a new life. Through this rebirth one leaves death and enters into life. It is true that death is still present with us and will be present until the final resurrection. But those born again in Jesus Christ are essentially passed from death to life. The power and hold of death is broken.

This is the salvation of God’s people!

One manifests this new life by loving his brethren.

John speaks of loving the brothers of the family of God.

To understand what this love is we must bear in mind that there are two words in the New Testament for love. The one speaks of a love that is based on the admiration and esteem that one has for another and that leads him to seek that person’s welfare. The other speaks of an emotional attachment to someone. The latter is the lesser form of love and can be translated “like.”

The passage that we have before us in this meditation speaks of the higher form of love.

Loving the brother does mean, however, that we admire and esteem him for what God has made him to be in Christ with his gifts and devotion to the Lord. Love also means that we seek his welfare at all times. We do this by helping him in his need, even at sacrifice to ourselves. We bear with his weaknesses. Remember, love covers a multitude of sins. When he sins, we rebuke him. When he repents, we forgive him, even though he has hurt us deeply with his sin. When he struggles, we encourage him and build him up in his faith. And as much as possible we live in friendship and fellowship with him.

This is love, indeed!

This is contrasted to hating the brother. If love is the esteem you have for someone so that you seek his welfare, hatred is to find one disgusting so that you loathe him and seek his hurt.

According to the preceding verses, the world hates the children of God. And they do so exactly because the latter are God’s children (v. 13). An example of this is Cain, who slew his brother Abel on account of his righteousness (v. 12).

This hatred can manifest itself in a number of ways—avoiding the brother, refusing to forgive, holding a grudge, or even striking back in revenge.

Our love or hatred of the brethren is the test of whether we have passed from death into life or remain in death.

Let’s look at the negative. Writes John, “He that loveth not his brother abideth in death. Whosoever hateth his brother is a murderer: and ye know that no murderer hath eternal life abiding in him.”

There are two thoughts here.

Secondly, one who continues to hate the brother does not have eternal life abiding in him, but rather death. To have something abide or remain in you means that it has established itself permanently within your soul and exerts its power over you. It controls your whole life. One who continues to hate the brother demonstrates that the power of life is not in him but rather death. Death has taken hold of him and controls him. Hatred of the brother is the working of death in one’s life.

Positively, we know that we have passed from death into life, when we love the brethren.

This love is not perfect in this life, but it is real and powerful.All this implies a calling.

Let us love one another.

We often struggle to love some in the church. This is because the work of grace is not finished in us. We all struggle with a sinful nature full of hatred.

And so the Scriptures call us repeatedly to love one another. John even begins this section of his epistle with this calling. “For this is the message that ye heard from the beginning, that we should love one another” (I John 3:11).

Let us give heed to this calling to love the brother.

The strength to do this is God’s great love for us.

Then we and all those around us will know that we have passed from death into life. 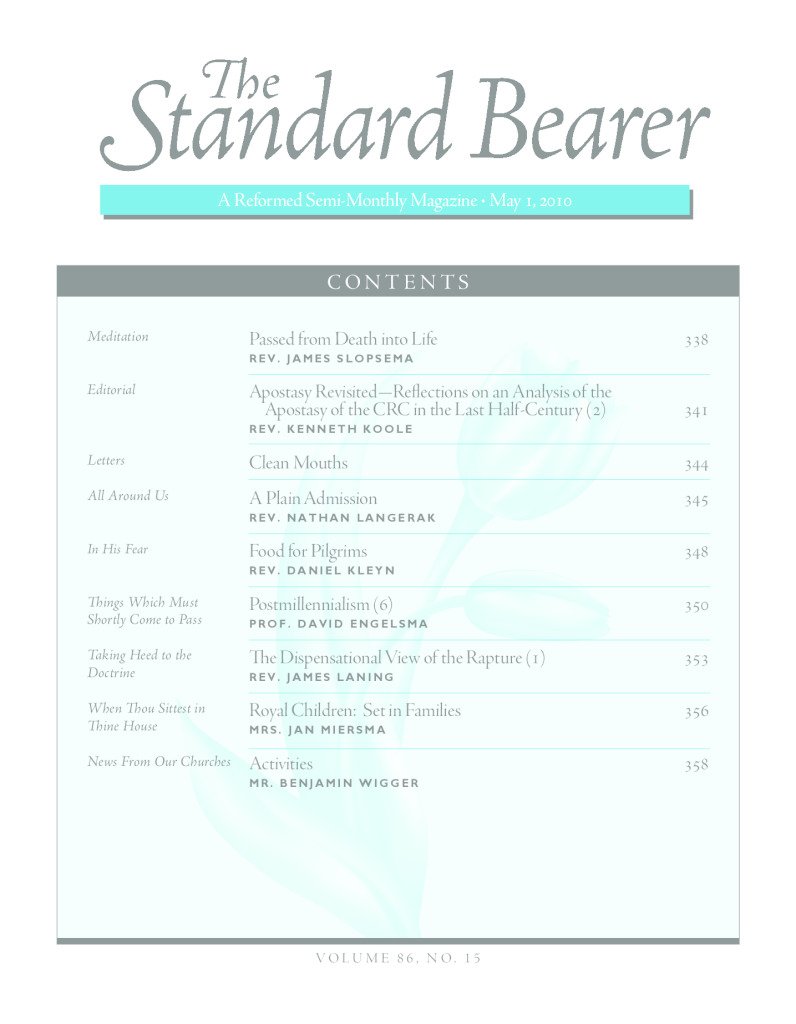