Part 2—Exposition of the Canons, Fifth Head of Doctrine. Of the Perseverance of the Saints. Rejection of Errors, Article 7 (cont’d)

As we mentioned last time, our fathers in this article reject the Arminian contention that temporary faith and saving faith differ only in duration with an appeal to the Parable of the Sower, or, more correctly, the Parable of the Four Kinds of Soil. And they make a comparison between one class of bad soil and the good soil. They single out the stony soil, undoubtedly because, as we have seen, Scripture specifically mentions that these believe for a while and later fall away. And we have already noted that besides this difference of duration there are three points, of difference mentioned by the fathers in this seventh article—three points of difference which underlie and explain the difference in duration. We have already quoted the Scriptural passages under consideration; and we may therefore now proceed with our discussion of the details of the three-fold distinction made by our Canons.

What, first of all, is the picture of the stony-soil-hearer-of-the-Word?

We must understand that this stony soil is apparently good soil, soil which as far as the surface is concerned is soft soil, but which thinly overlays hard rock. It is not soil that is intermixed with stones, gravel soil. That can after all be fairly good soil. You can have a goodly measure of gravel and stones in the soil, and yet it will yield a fair crop. But this is rocky soil, so that there is a layer of rock under the surface. And the layer of rock is covered by a thin layer of good soil. And that means that apparently, that is, as far as the surface is concerned, it is good soil. You cannot see the hard rock below the surface. And the result is that the seed will fall into such soil, and will probably sprout more quickly than in the good soil. But there is no depth of earth. And because of this, when the sun comes up, the plant is burned and withers. It lacks moisture. And it establishes no deep root. Hence, before the plant can grow up and bear fruit, it dies.

This is a figure, according to the parable, of a certain class of hearers of the Word. And what characterizes these hearers? First of all, they have an evil heart. As far as heart is concerned they are just like the wayside hearers.

Their heart is hard, like the rock. It is filled with enmity against God. It has no receptivity for the Word whatsoever. It hates the Word of God. And the seed of the Word never penetrates the heart. But, in the second place, in a natural way the makeup of these stony-soil-hearers is soft. The surface that covers that hard heart is like the soil that covers the rock. They are people that are easily affected by any­thing and by any circumstance. And especially if the preach­ing is a little emotional and sentimental, like the preaching in many revival meetings, these people are also easily affected by the preaching. And the result is that there is a certain imitation of faith, an imitation which in its external mani­festation and activity is very similar to the manifestation and activity of true faith, but which does not have its ground and basis in the power of saving faith in the heart. It does not have its root in the heart and in the principle of regeneration that is instilled in the heart by Christ through His Spirit. Man, who is unable to judge the heart and who sees only that external appearance, is not able to distinguish that imitation or counterfeit faith from the genuine faith in Christ—at least, not at once. But those who manifest that outward activity of this imitation faith are motivated by emotion, by the impulse of conscience, by pride, by various cir­cumstances. However that may be, their action is self-centered and self-seeking rather than God-centered and mo­tivated by the love of God. But they are in a natural way affected by the preaching. They immediately receive the Word with joy. And that seems to be their characteristic, that they receive the Word with joy. That joy is a mere natural and emotional joy, not a spiritual joy in the Lord. But as far as the surface is concerned, you cannot tell the difference at once. Their joy expresses itself in singing and in hallelujahs. They are stirred in the surface of their nature—not in their heart—in such a way that they at once respond to the preaching of the Word with a highly emotional response, so that they may even seem to be more converted than those who receive the Word in true faith. But they have no root in themselves. No more than the surface of their nature is affected and stirred. The heart remains hard. Their joy is not from the heart, but purely natural. They have never been engrafted into Christ. And their joy does not spring from a heart that abides in living communion with Christ. That is also why their reaction is one of natural joy too, while the first and deepest and principal manifestation of the real life of the kingdom of heaven in this life is sor­row, sorrow over sin.

Thus it is too, in the third place, that they endure but for a time and never bring forth fruit. Like the seed that sprouts quickly but never strikes deep root, and which withers away under the heat of the sun and never brings forth fruit, so these people of immediate and temporary faith with their blooming joy wither under the heat of tribulation and persecution. The chief characteristic of their counterfeit faith is their natural joy. And therefore when the sorrows occasioned by tribulation and persecution arise, these are completely contrary to their natural joy. They are offended, scandalized, at a Word that involves the sorrow of tribula­tion. And so the plant of this temporary faith dies before it can ever yield any fruit of patient continuance in well doing.

In contrast the Lord pictures the good-soil hearers.

In this connection you have, first of all, the picture of the good soil. For the purposes which concern us at present we may note that this good soil is not like the shallow rocky soil in which the seed could not strike root. It is soil that is fertile, well-prepared, clean, and deep. It is receptive to the seed. The seed can penetrate the soil, sprout, strike root, and grow and flourish, and finally bring forth fruit.

This good soil is the figure of a heart that is good and honest, according to the record in Luke. It is a heart that is receptive for the seed of the Word, a regenerated heart. Notice, by the way, that this heart is good and honest, well-prepared and receptive soil, before the seed is sown. And that certainly does not mean that the heart is naturally and innately good. But it is a heart that has been prepared by the Holy Spirit for the seed of the Word. For unless a man be born again, he cannot even see the kingdom of God. He is a stranger to it and to the Word of the kingdom from a spiritual point of view. But the Holy Spirit causes a man to be born again and causes the heart to be prepared for the seed of the Word. And after the soil of the heart has been prepared by the Holy Spirit, then the seed of the Word is sown. Hence, indirectly the parable here teaches immediate regeneration. But at any rate, our point now is that the heart of this good-soil hearer is good. It is regenerate. And not only is that heart regenerate and filled with the principle of the love of God, but it is also actually receptive for the seed of the Word, that is, it hungers and thirsts after right­eousness, so that when the seed of the Word is sown, that heart is willing and ready to repent and to be sorry for sin and to seek the kingdom of God and its righteousness. For the seed of the Word is sown and sprouts and takes root, firm root, in the heart, from which are the issues of life. And that heart is a heart that is already in abiding connec­tion with Christ and his life. And so the true believer is firmly rooted in Christ. The result is that fruit is produced, When the heart is prepared by the Spirit of Christ and is regenerated and filled with the love of God in principle and thus hungers and thirsts after righteousness, then that hunger and thirst is made conscious and is satisfied, so that the result is repentance and faith and sanctification of life. That is the fruit. It is spiritual fruit, inward fruit, the fruit of a saving faith. That fruit is brought forth in various measure. First of all, it is not always the same in the same person. One time differs from another in respect to the reception of the seed. Even the Christian is not always the same in bearing fruit. And secondly, one person differs from another in bearing fruit. The seed is the same; and undoubtedly the seed always bears fruit to its full extent. But the persons differ in rela­tion to the seed. While all the good-soil hearers receive the seed in an honest and good heart, they do not all have the same capacity and the same measure of faith. And so they bring forth fruit, some thirty, and some sixty, and some an hundred fold. However that may be, when the seed falls upon the good soil, when the heart is prepared and the seed of the Word is sown, then the bearing of fruit is sure and inevitable. The good-soil hearers bring forth fruit faith­fully and perseveringly. In Luke it is emphasized that they bring forth fruit with patience. The same tribulation and persecution befall the good-soil hearers as come upon the rocky-soil hearers. And these storms of persecution and tribulation are good for the child of God, who has grace in his heart, because they cause that seed to strike deeper root. The result is that the child of God strikes his roots deeper into Christ, holds on to Christ by His grace. And so he en­dures to the end, and with patience brings forth more fruit. He is cleansed and sanctified and strengthened. And since his joy is a true joy of heart in God through Christ, the sorrow of tribulation and persecution does not cause him to lose that joy and to be offended, but increases it, so that he rejoices even in tribulation.

Thus it is once more abundantly plain on the basis of Scripture that the Arminian heresy is false and misleading, and that it deprives one of the solid comfort that he shall finally obtain the victory and of the infallible pledge or earnest of eternal glory, without which the elect of God would be of all men the most miserable. 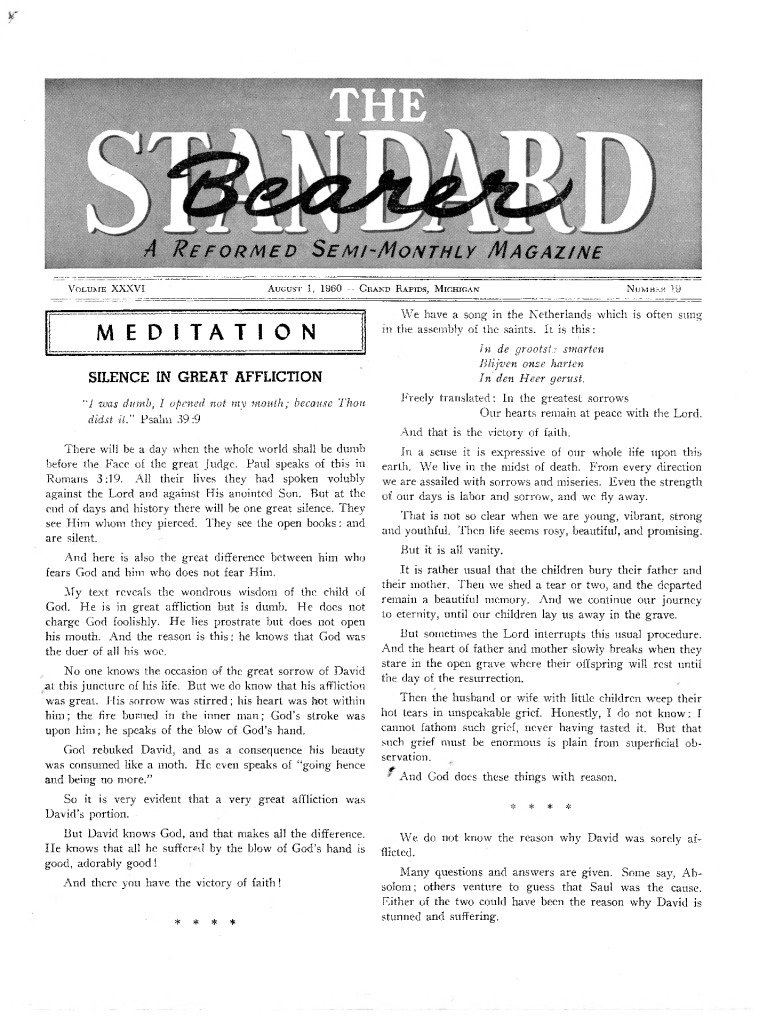