Mechanics need a license in many states. Doctors and lawyers need a license to practice. Beauticians and barbers are licensed. So are teachers in most of the states. Would it not make sense to require the same to be a parent? Is it not more important that the state verify and affirm that one will be a good parent than to declare that one is capable of cutting hair properly? Some think so.

Is the very thought of licensing parents a bit frightening? Is it absurd? Would any one ever propose such foolishness? It appears that in prestigious legal magazines the idea of licensing is seriously proposed. In the Chalcedon Report, October, 1988, the following is presented:

An attorney writing in the American Bar Association’s Family Law Quarterly has breathed new life into an eight-year-old proposal for government licensing of all parents.

The law review analysis and action-call is the latest and most far-reaching step in a growing campaign to use the specter of child abuse as the excuse for total state control over society’s basic building block—the family.

The article, “Licensing Parents: How Feasible?” was authored by Claudia Pap Mangel, an associate of a Washington, D.C., law firm, with the acknowledged guidance of Judith Areen, associate dean and professor of law at Georgetown University Law Center. The article develops a thesis proposed in 1980, and defended a year later, by Hugh LaFollette, writing in the journal Philosophy and Public Affairs.

LaFollette based his original treatise on the presupposition that state regulation is the required response to any activity which is potentially harmful to others and which requires a demonstrable degree of competence for safe performance. LaFollette argued that “parenting” is an activity with potential for harm so deep and wide that it unquestionably qualifies for such regulation.

LaFollette insisted that his goal was merely to protect children and circumscribe only “very bad” parents, not to “punish” all parents with sanctions or red tape. He thus proposed that unqualified and therefore unlicensable parents simply be required to give up their children for adoption. Alternatively, unlicensed parents might be subjected to continued surveillance by state “protective services.” To encourage licensable behavior, he proposed tax credits for parents who qualify for licenses.

Ms. Mangel says LaFollette’s scheme is theoretically desirable, but to be feasible it hinges on the state’s ability to conduct accurate and reliable licensing tests. She claims such tests have already been devised, including demographic profiles (with suspect factors such as “social isolation”) and “family stress checklists.” The key test, developed in the past six years from a “comprehensive review of the literature” on child abuse, is a 160-item questionnaire with a third-grade “readability level.” It takes a parent no more than 20 minutes to complete and is called the Child Abuse Potential Inventory. Like all of the devices and instruments Ms. Mange1 cites, this test is based on the notion that certain descriptive factors applicable to a given parent are capable of reliably predicting abusive behavior. She says this test is so precise that it can pinpoint only those parents who are certain to be or become, not just neglectful or marginally inadequate in their parenting, but clearly abusive—the “very bad” who are targets of LaFollette’s scheme.

Scary? I would say so. Even those proposing this idea recognize the potential for great harm. “Big Brother,” the state, would be able to dictate what is done within the home. The article indicates that where this licensing is used, the government has dictated even the religious practices a family may follow.

In gross understatement, Ms. Mange1 notes that parental licensing schemes “may appear an outrageous intrusion by the state into family privacy.” But she points out, with chilling accuracy, that various forms of case-by-case licensing already are being widely practiced by social service agencies and the courts. She argues that a comprehensive administrative plan of licensing covering all parents and potential parents would just be more efficient and less costly . . . .

Though insisting that licensing could be tuned to focus sanctions only on the clearly abusive parents, Ms. Mangel is unmistakably aware of the broad implications of a comprehensive, bureaucratic licensing scheme. She notes, for example, that many parents “would fear that a licensing scheme could be intentionally abused by those who administered it and used against parents whose ideas of child-rearing and family life are not in line with community standards.”

In today’s prevailing and dominant secular-humanistic climate, most Christian families would likely fall into such a category. As Ms. Mangel acknowledges, “where the values of a community are grounded in an identifiable cultural or ethnic background [she avoids “religious” background], parents in the community who are not members of the dominant cultural group would fear that a parent licensing program would be used to pressure them into conforming to community standards of child-rearing.” . . .

Those who believe there would be no sanctions for “insubstantial reasons” might well examine Sweden’s history of tight family regulation, where children have been summarily removed (without appeal opportunities), when, for example, Christian parents insist on their children’s church attendance. Furthermore, it is not a great leap into incredibility to foresee even more sinister applications, such as forced abortion for prospective mothers who fail to meet licensing tests based on community standards. Incentives already are on the horizon . . . .

The article also states, “Claudia Mangel . . . argues that fears could be allayed by what amounts to semantic deception: ‘Perhaps choosing a different term, such as parent certification instead of parentlicensing would make the whole idea of state regulation of parenting more palatable.’ Such suggestions propose a deliberate use of disinformation to hide a totalitarian enterprise, and thus closely parallel or exceed anything Soviet authorities now practice.”

Would you believe that this is written in prestigious journals of law in this land of “freedom”? It would not at all be difficult to imagine some of the questions which could be asked. “Do you believe the requirement of the Bible that disobedient children can be spanked?” Or: “Do you believe it to be necessary to require your children to attend church with you?” Or: “Do you insist that your children pray with you?” The questions are not far-fetched. After all, children are also supposed to have “rights,” including the “right” to determine for themselves if and how they will serve God. To compel them to do that which is contrary to their wishes is to violate their “human rights.” Such would indicate the inability to be a “good” parent according to the standards set up by the state.

Will we soon come to that time when the state requires a license in order to take care of the children God has entrusted to our care? This might seem impossible—but in light of present-day developments, perhaps it is not as impossible as it sounds. And it is chilling to think that the whole concept is given serious consideration by those who seek to form proper legal positions in our land. Is this a clear sign also of the approaching anti-Christian world power, ruled by the antichrist himself? 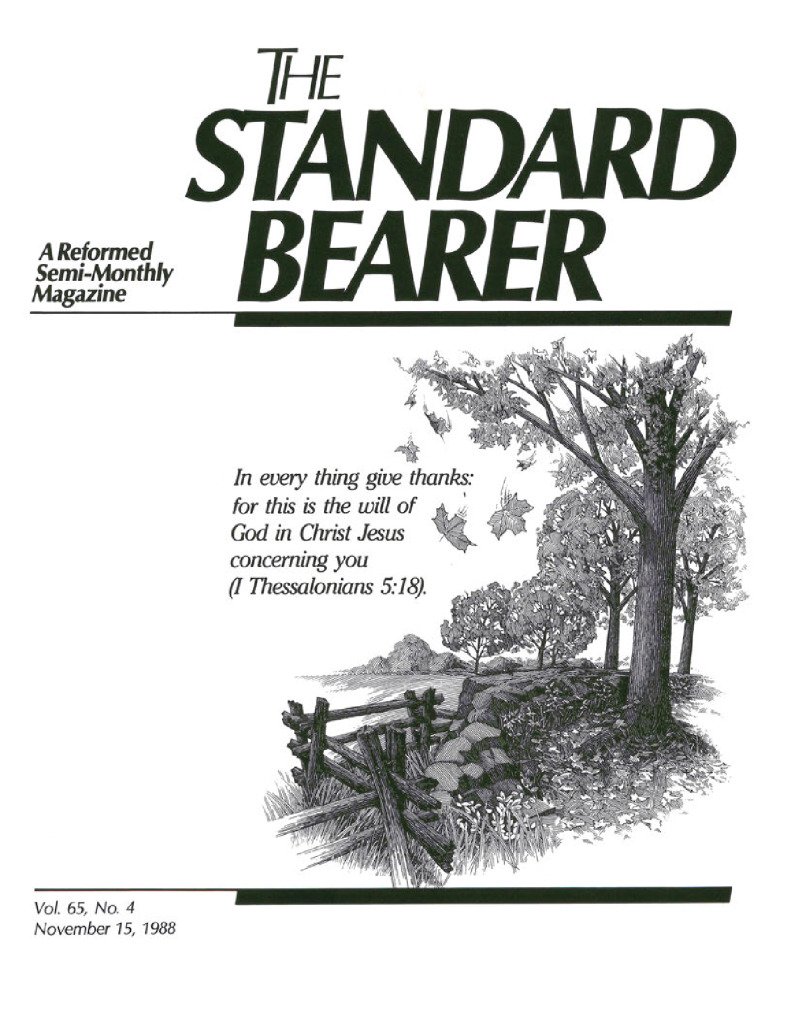