Out of War Arises Peace

Out of War Arises Peace

In Matthew 24, the classic chapter concerning Christ’s return and the signs which forewarn the child of God concerning that return, Jesus explained to His disciples the sign of wars and rumors of wars. In verses 6-8 we read the following, “And ye shall hear of wars and rumors of wars: see that ye be not troubled: for all these things must come to pass, but the end is not yet. For nation shall rise against nation, and kingdom against kingdom. . . . All these are the beginning of sorrows.” To the watchful child of God the wars which abound in our day serve to remind him concerning Christ’s imminent return.

We must understand, of course, that the way these wars work toward Christ’s coming is by impeding or hindering the rise of the antichristian kingdom of peace. Before Christ returns upon the clouds of glory the gospel of salvation must be proclaimed to every nation, tongue, and tribe of the earth. The reason for this is twofold. First, all of God’s people must be called by the gospel unto repentance and faith before the return of Christ; secondly, the entire world must be left without the excuse that they had never received the gospel. In order that the gospel might freely run its course through this world however, any premature development of Antichrist must be thwarted. This God does by means of wars. Nation must rise against nation and kingdom against kingdom. As long as one nation rises against another the reign of peace toward which the Antichrist strives cannot take place. The world powers through which Satan attempts to unite the world only serve to destroy one another. Such is God’s purpose behind wars.

That this is true is clearly indicated already in the old dispensation. There was then, even as there is today, two or more powers striving over against one another for control of the world. Daniel was a witness of that struggle. He witnessed the development of the great Assyrian empire. He also witnessed its downfall by the hands of the Babylonians. He witnessed the rise of that empire but also its fall by the hands of the Persians. Each of these kingdoms if not destroyed by war would have resulted in a premature development of the antichristian kingdom. That is why God sent wars. The gospel had not been preached throughout the entire world. Moreover, Christ had not yet come to die upon the cross. ‘Thus, according to God’s decree, the Antichrist could not as yet develop.

The same is true of the wars which abound in our day. They serve to impede the development of that final antichristian kingdom. As long as we hear of wars and rumors of wars the end cannot come. Jesus will not return. The peaceful reign of Antichrist wherein God’s people will be persecuted must first of all develop. Only then will Christ come again.

Because of this explanation of this sign of Christ’s coming there arises a common misconception— a misconception which, if maintained, renders us unprepared for the rise of Antichrist. That is this: as long as there are wars we need not worry about the development of the antichristian kingdom! Jesus tells us that these wars are only “the beginning of sorrows” and that “the end is not yet,” so why worry about Antichrist as of yet? The final development of his kingdom cannot be that near at hand! In fact, today there is an increase of wars. Nations all over the world are threatened by it. Not only is our nation in a constant tug-of-war with the Russian world power but we find that even the smaller nations of this world want a piece of the action. That is evident to us with the recent hostage crisis with Iran, with the Cuban refugee crisis, and with the murdering of a number of our citizens in San Salvador. Russia too finds this to be the case. She enters into the war in Afghanistan, and receives threats from Poland. There are wars and rumors of wars between other nations as well. We read of skirmishes between Protestant and Catholic factions in Ireland. We read of the civil war which claims the lives of many in San Salvador, or of the political violence in Guatemala. Then too there is the war between Iran and Iraq. Clearly the world in which we live is at this very moment in an extreme state of unrest. Is it not impossible, therefore, that the Antichrist would arise out of this terrible mess? Perhaps more so today than at any other time in history is the world so divided and uneasy. How is it possible for Antichrist to come and establish a kingdom of peace? So, as a result of this reasoning we are no longer alerted to the rise of Antichrist.

We must realize, however, that it is exactly out of this chaos of wars that peace will emerge and the antichristian kingdom will be established. In Revelation 13the apostle John writes concerning a vision he had received describing the Antichrist. In that chapter we read of two beasts which represent the political and the spiritual powers of the Antichrist. Concerning the first of those two beasts we read that he arises out of the turbulent and windswept sea. The waters of the sea signify the peoples and multitudes and nations and tongues of this world. The fact that they together make up this turbulent and wind-tossed sea means that these nations and tongues and peoples of the world are in a constant state of unrest. Part of the reason for this unrest is, as we have noticed, the wars which keep this world in a state of constant turmoil. Out of that world which is tossed about by wars and rumors of wars arises the Antichrist. We must understand that and look for that. Wars will increase in their intensity just prior to the development of the anti- Christian reign of peace.

In the midst of all this unrest the Antichrist will rear his ugly head and offer a solution to all the world’s problems. Not only will he present a solution to the present economic and social ills but also a solution to all the differences which cause war. This Antichrist will not only be so powerful that all will say, “who is like unto the beast? who is able to make war with him,” but he will also do great wonders with God’s creation, and in so doing shall deceive all that dwell upon the face of the earth. Everyone in this war-torn world will think that Antichrist is able to solve all the differences. Thus, peace will arise out of war. Antichrist will be established. Because the world is so entangled in the web of war they will readily accept the solutions which Antichrist will offer. The world will then join hands under him and peace will prevail.

We must look for that as we watch the continued development of wars in this world. They will not cease nor will they diminish. You and I must not expect a world of peace and then the establishment of Antichrist. Such will never be the case. But as wars increase we must watch all the more closely for the beast out of the sea. His solutions will seem so practical and rewarding for those who adhere to them. But they will be filled with lying and deceit. They will stand contrary to the establishment of the heavenly kingdom of Christ. We will have to see through his guise and stand fast in Christ. It is exactly for this reason that Paul exhorts the Thessalonians, and us with them, in II Thessalonians 2:15, “Therefore, brethren, stand fast, and hold the traditions which ye have been taught, whether by word, or our epistle.” Only in this way can we watch for Christ and understand the signs of His coming. 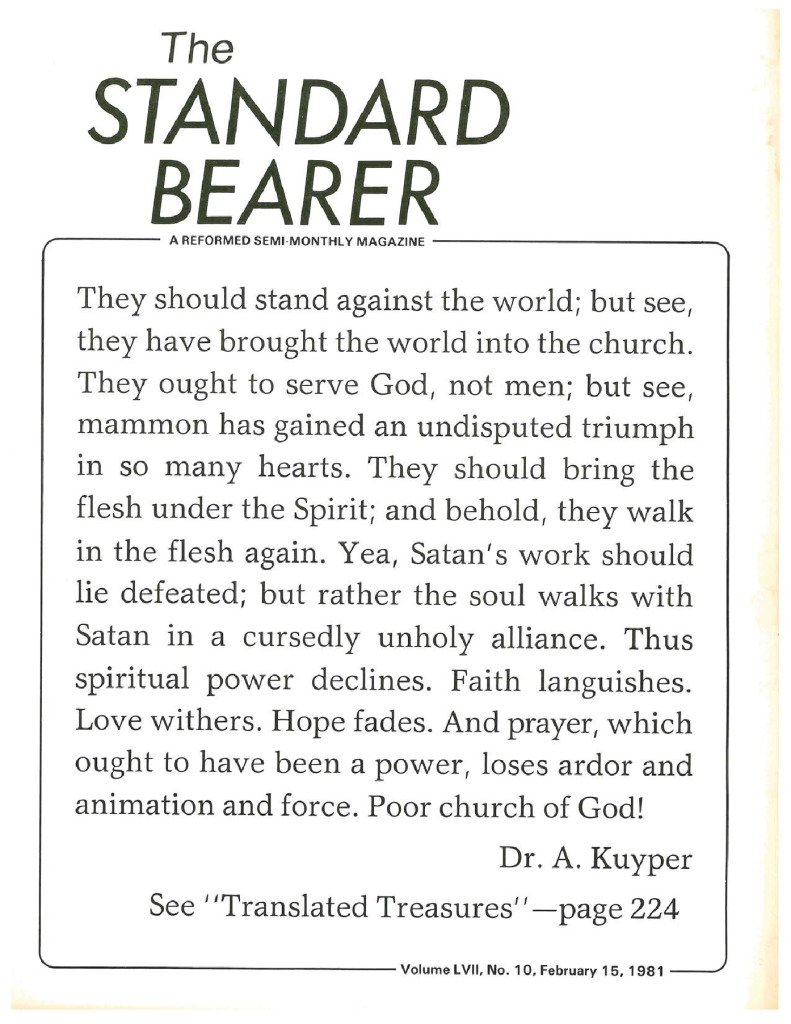