Our Mission and the Times

Our Mission and the Times

In times like these the question presents itself quite readily whether the times are conducive toward continuing our mission endeavors or whether it might not be advisable to discontinue them, at least for the present.

The more so because of the peculiar nature of our mission work.

It is true that the war has practically closed every foreign mission field, and that therefore every available means could well be applied at home, but the fact is that as yet all our effort have been restricted to a home field. We have not yet reached a stage where we were able to send out a foreign missionary, but have felt it our calling as Protestant Reformed Churches to labor first of all in the erring churches which have cast us out, in order to show them the error of their ways.

To the churches which have departed from the truth of God’s sovereign grace and fallen victim to the heresies of Arminianism we have directed our efforts, that they might see their error and return to the truth of the Word of God.

But the question might well arise whether the times are not opposed to such efforts, and whether it might not be better to discontinue our mission work, at least “for the duration”.

The objection might be raised that we are already so far removed from 1924 that it is almost impossible to create interest in the issues which are all but buried in the past. What, so it is sometimes asked, do people know about the happenings of some twenty years ago which gave rise to our Churches? How do they know where to lay the responsibility for our separate existence? And, what is more, why should it still interest them?

But an even greater objection might be that the whole world is enveloped in the most extensive and devastating conflict mankind has ever known. Foremost in the minds and on the lips of every person is the present war with its horrors, its sufferings, the accompanying doubts and fears, and the resultant economic disorder. Young men in the prime of their lives are being inducted into service and sent to various distant fields of action, sons and brothers and friends are expected to leave at a moment’s notice, and even young husbands and fathers live in uncertainty as to their future. In many cases business is disrupted, laboring hands are hard to find, defense work with its 24 hour program disturbs the routine in many homes, while tire ration and the impending gasoline ration threaten to reduce traveling to a minimum.

With a view to these and similar circumstances, would it not be better to postpone our efforts until a more suitable time?

Yet the objections are hardly raised before we realize that our mission work cannot suffer delay, and, what is more, is now even more important than ever before.

The fact that we are already so far removed from 1924 can only mean that our responsibility grows as time goes on. The history that has led to the final breach between us and the mother church, the circumstances that have given rise to another distinct group of Reformed persuasion, and the reasons for our separate existence may never be lost out of sight.

In the meantime the breach grows between us and them, as we strive to be progressively Reformed in the healthy sense of the word and as those churches continue in the error of their ways. There can be little doubt but that we are farther removed from each other now than we were at the time of the separation, and that the line of demarcation must become increasingly evident as time goes on.

Besides, another generation is arising that knows nothing of the history of some fifteen to twenty years ago. They are not informed about the facts that brought about our separate existence and are kept in ignorance about our teachings. Frequently the information they do receive concerning us is even grossly misleading. They are either told that there is no fundamental difference between us, or that our views are entirely contrary to Scripture and to the Confessions. And, at the same time, the theory of common grace is being inculcated into their receptive minds, both directly and indirectly, so that they become ready victims to its errors.

Our task is not merely church extension, but the calling: to defend the truth of the Word of God and to oppose all doctrines repugnant there-to, to strive for the unity of faith over against every dissenting heresy, and to seek the pure manifestation of the true Church of Jesus Christ, which is His body, the temple of the living God, founded on that foundation of which Jesus Christ is the chief cornerstone.

These peculiar times, instead of interfering with that form of mission work, are in many ways especially favorable to it.

To mention but one aspect, these times certainly belie the whole theory of common grace.

How anyone can maintain that God is graciously inclined to all mankind and at the same time justify our entrance into the present conflict is hardly conceivable. If God’s favor rests upon Hitler and his compatriots, upon Mussolini and his actions, upon Japan in their surreptitious assault upon the American possessions, can we afford to be less gracious than God? How can war ever be justified on the basis of common grace? Should we arise in hostility against a nation and snuff out the lives of those whom God favors in His grace? And yet there is no doubt but that the defenders of common grace also justify America’s entrance into this war.

However, if human ingenuity and inventions are the fruit of common grace, it must also be conceded that the axis powers have been richly endowed with this grace during the past decade. Hitler’s whole war machine which is spewing forth destruction of lives and property from day to day and his military strategy which has beaten down nation upon nation are the products of such human skill and ingenuity as the world has never seen. Every field of science and industry is being called into action to muster enough forces to meet and counteract these powers. But if these things are the fruit of common grace, the results today prove highly unsatisfactory.

More weighty even than that is the question how anyone in times like these can still maintain and teach a restraint of sin through the operation of the Holy Spirit in the hearts of the wicked. In times when even the world speaks of universal peace and brotherhood and exercises the friendly neighbor policy toward one another it may prove simple enough to allow ourselves to be deceived into thinking that the human heart is not so bad after all. But these dreams are suddenly blasted when the hearts and secret thoughts of men are revealed. Enmity against God, greed for power, burning hatred and bitter animosity turn this world into a seething cauldron of destruction.

Is it possible that the leaders in the Christian Reformed Church are beginning to realize their error? One might be inclined to hope so, judging from an article appearing in the September 4 issue of The Banner, written by Prof. H. Schultze, in which he writes the following: “War has reached through with its bloody fingers and has modified that which we thought and think should be immuned to all outside forces. It has vitally affected our religious outlook and exercises. It has in many a mind raised doubts about the obligation to love our enemies, if those enemies be Germans, Nipponese or Italians. It has challenged us to rethink our conception of God. It tends to make us national rather than universal in our religious evaluations. It tends to modify our conception of the Christian virtues of meekness lowliness, humility, resignation, forgiveness, and so on. Our whole conception of what is the proper way to manifest our Christianity seems to undergo tremendous changes. There is a place for hating and killing now. Vengeance no longer seems to belong to God. It is not easy to be sober minded now. There is obvious confusion all about us; and we share in that confusion. We should be above it, if our Christianity means anything at all.”

Note particularly the statement which I underscored above.

The only possible solution to all the problems of our day lies in the fact that God’s curse rests upon this world and that He is visiting it with His judgments as never before.

The measure of iniquity is rapidly being filled as the world makes itself ripefor the final judgment to come. Whatever the outcome of this war may be, things are developing with such increasing rapidity that we are literally being swept along toward the last days of the anti-Christian power.

Wars and rumors of wars are, in the meantime, but the beginning of sorrows. Well may we heed the words of Jesus, that we “be not troubled, for all these things must come to pass, but the end is not yet”. These things are only the beginning. They do include the principle of sorrow, the filling up of the measure of sin and the outpouring of the judgments of God, but many more things must come to pass before our final deliverance is reached.

We are living in particularly serious times. Times in which the Church must especially watch in prayer, walk circumspectly, properly evaluating and buying out the time, since the days are evil. Now, if ever, we are called to maintain and live our spiritual isolation. What fellowship hath righteousness with unrighteousness, and what communion hath light with darkness? What concord hath Christ with Belial, or what part hath he that believeth with an infidel? Wherefore come out from among them, and be ye separate, saith the Lord, and touch not the unclean thing, and I will receive you.

For the sake of the Church of Jesus Christ in the midst of the world as a chosen and peculiar people, we must strive for the unity of faith which has its one and only foundation in the Word of God.

Our missionary efforts cannot suffer delay, but must continue with even added zeal, also in these times. 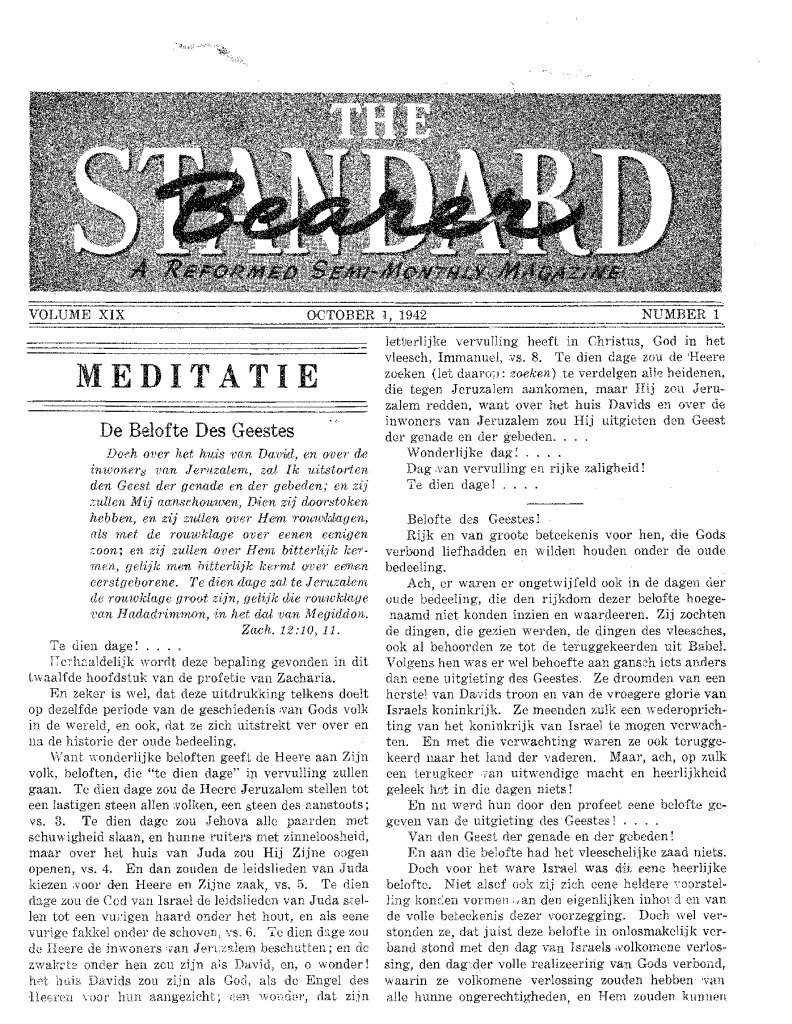