My little children, these things write I unto you, that ye sin not. And if any man sin, we have an advo­cate with the Father, Jesus Christ the righteous:

And he is the propitiation for our sins: and not for ours only, but also for the sins of the whole world. I John 2:1, 2

The apostle John uses an address that literally means “offspring.” It is derived from a word that means “to bring forth or to produce.” He has been inspired to proclaim the Word of God through which we were called out of darkness into His marvelous light. Because we have been called into this blessed fellowship of God through the Word that has come to us from the apostle as inspired by the Lord, we are addressed by him as his little children, begotten through the Word of truth.

It should in no way offend us that we are called little children, because the principle of the new life, of the new obedience, is so very small in us. There is no exception, for even the holiest in the church of God has but a small beginning of the new and heavenly obedi­ence. “All these things” refers to what John has already written in verses 6-10 of the previous chapter. All these things were written that ye sin not. He did not write these things so that we could become careless and profane. He does not speak of the cleansing blood of Christ in order that we may feel free to sin because the blood will cleanse us anyway. He writes these things to put us on our guard, because sin also exists in the believer. Christ cleansed us from our sin, not that we should abide in it, but that we should be delivered com­pletely from it. Our deliverance from sin and into the blessed fellowship of God’s covenant was the purpose of the redemption affected by the Lamb of God upon the cross of Calvary. However, if we do sin, we have an Advocate with the Father. How wonderful it is that we may have Him before us as we seek the blessed fellow­ship of the living God. We surely need Him.

The term advocate appears elsewhere in Scripture in connection with the Holy Spirit and translated “Comforter.” It literally means “to call to one’s side,” an advocate, a lawyer, an attorney, one who is called to another’s side to plead his cause. The word was used by the Greeks to refer to those who were called to defend people in court. This, then, also implies the idea of assistance or help. That is why the Holy Spirit can be called our Comforter, for that certainly is an aspect of His work.

The Holy Spirit as Advocate is called to our side to plead God’s cause with us, in our hearts. He testifies with our spirit that we are the children of God. We must walk and conduct ourselves as children of God in the midst of the world. He champions the cause of God in us. He renews, strengthens, and enlightens us, thus comforting us by effecting within us and assuring us of the work of divine grace and salvation in Christ Jesus. The Holy Spirit brings Christ to us and within us.

Jesus Christ is our Advocate in heaven. Even as the Holy Spirit pleads God’s cause with us, so Jesus pleads God’s cause. He pleads our cause with God, with the Father. He is our Attorney in heaven and pleads our cause there. This is the cause of righteousness by faith, of the forgiveness of our sins, of cleansing us from all unrighteousness. Christ is always interceding and pleading before God that His cause may be realized in us.

Christ pleads with the Father, not only as His Father, but also as the Father of His own. It is the Father’s love and fellowship that He seeks and for which He pleads. This He does continually, not just once in a while whenever someone hap­pens to sin. We have an Advo­cate who is always on bended knee before the Father. As Jesus Christ He is the Son of God in the flesh, who suffered and died on the cross and was raised again on the third day. The very fact that He is in heaven, really and bodily, is in itself a tremendous factor. He is the Head of the church, the Chief among His brethren, a fact that is a tremendous testimony. Thus He intercedes with the living God.

This intercession is certainly necessary, for there can be fellowship and communion with God only on the basis of perfection, of righteousness and holiness. This implies that there is not one among us who can intercede on our behalf. Not one of us has the right to appear before Him. No one has the right to pray to God, because we are all born dead in sins and trespasses. Our sins must be paid for before we can be returned to His favor. Intercession must be made before and unto the living God. Christ is the only one who has made complete payment. His prayer is real and vital, an inter­cession that constitutes the only possible basis for God’s fellowship and communion with us.

Christ can do this because He is the Righteous One. Righteous means “a straight line.” It is to be in perfect harmony with the will of God. Legally, according to the Judge of the whole earth, there can be no charge brought against Him, for He is innocent. Spiritually, He is in perfect harmony with the will of God, which is akin to holiness. From the legal point of view, as in the text, He represents sinners and is a propitiation for their sins. He is the Righteous One in the sense that He paid for all our sins and merited for us everlasting life. Only a righteous one can represent sinners.

He is our propitiation. This is different from recon­ciliation. Reconciliation is the work of God whereby He changes our legal state in reference to the law. For­merly we were objects of His wrath, but now we are objects of His grace and favor legally and are therefore entitled to His fellowship and com­munion. Propitiation is a covering for sin. Christ covered our sin, not in the sense that He hides sin, merely covers it up, but covering in the sense that He blots out and de­stroys it. Christ has taken our sin upon Himself and removed it in the way of His perfect obedience and His complete satisfaction of the righteousness of God.

This He did for our sin and the sin of the whole world. This includes Jews and Gentiles alike. The com­mon exposition of this phrase is that it refers to every­body, every man head for head. This is, of course, im­possible. In John 17:9 we read, “I pray for them: I pray not for the world, but for them which thou hast given me; for they are thine.” The will and the mandate of the Father was exactly that He should save and redeem only those whom the Father had given Him. If Christ died for everybody, then His death is not a covering for our sins, for some perish, meaning that their sins were not paid for. Had Christ died for all, then there would be no basis on which God in His righteousness could condemn them. Upon what basis then could Christ make intercession to the Father upon the behalf of those whose sins He did not cover? Absolutely none!

The elect are included in the word world. World is always considered organically, not every man head for head. It includes the whole gathering of the people of God from the entire world. They are the elect, or­ganically considered, as gathered out of every nation, tongue, and tribe. That is the comfort for us, for it includes us as well. How great the goodness and grace of God! 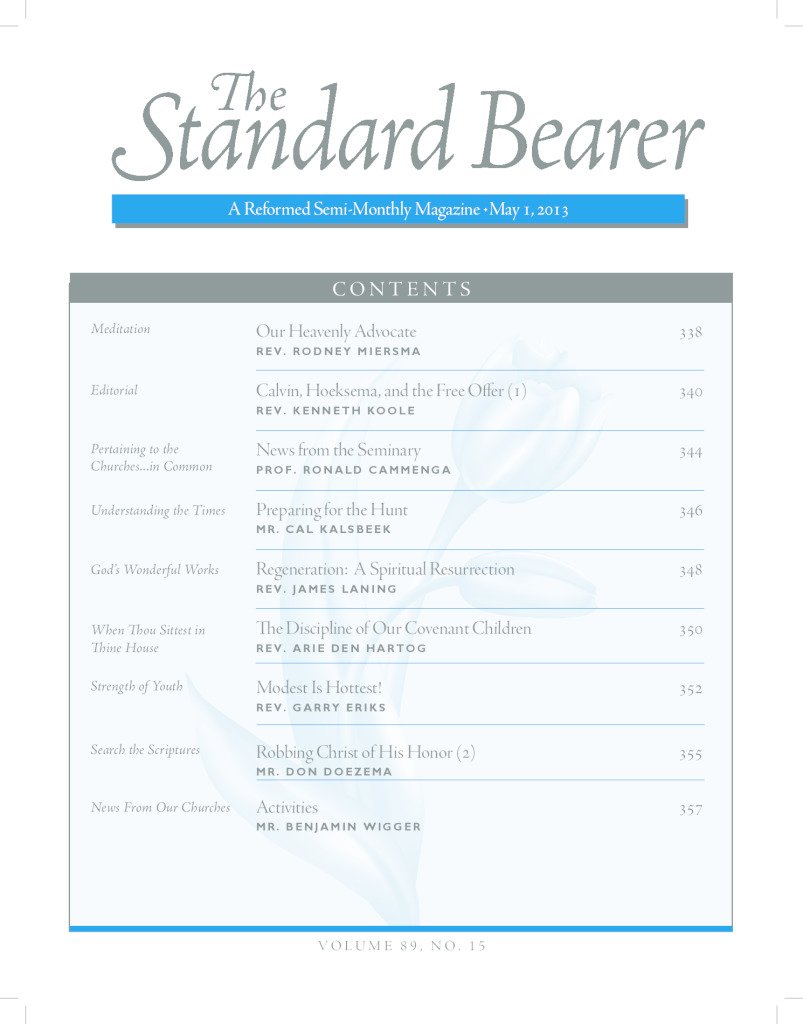