It was none the less than Cain, who hated his brother, who spoke the terrible words “Am I my brother’s keeper?” (Genesis 4:9b) These words were a horrible and rebellious retort to God Himself. They were spoken after he had killed his brother Abel, and who was at that very moment lying in his own blood as this drenched the earth! And he continued in this way. It is epitomized as the “way of Cain.” (Jude 1:11) It is the broad way which leads to destruction. And many there be which walk upon this way of hatred for the brother!

We do well for our very life’s sake, as much as we love our soul’s salvation, to, take heed to the warning of Christ, our Lord. He teaches us, in a very small sentence, the entire law and the prophets as it relates to our relationship to our brother. Fact is, that it is a dictum for every man whose breath is in his nostrils I Says Jesus “Therefore all things whatsoever ye would that men should do unto you, do ye even so to them: for this is the law and the prophets.” (Matthew 7:12)

This is not simply a legalistic “code”; it is the law of the life of Christ Jesus. It is the law of the Spirit of life. It is the narrow way which leads to life. It is the way which few are finding1 It does not seldom happen that with the very “Church Order” in one’s hands and while walking strictly according to the “law”, one either has not yet wholly escaped from the “way of Cain”, or is, (and that is worse) walking squarely in the middle of the road that leads to destruction!

John cries in his epistle “If a man say, I love God, and hateth his brother, he is a liar: for he that loveth not his brother whom he hath seen, how can he love God whom he hath not seen?” (I John 4:20) And, again, “and this is the commandment we have from him, That he who loveth God love his brother also.” (I John 4:21) Earlier in this same Chapter the apostle writes “Beloved, if God so loved us, we ought also to love one another.” (I John 4:11)

The foregoing sets forth in bold relief the sad reality that the most holy of all God’s children has only a small beginning of the new obedience. It emphasizes for great and small, for office-bearers and congregation that none of us has yet attained, and that none of us can with a good conscience before God look down from his imaginary heights upon his brother with a better-than-thou attitude.

Hear Paul therefore in Galatians 6:1-5 speak to the church of the Galatians,

“Brethren, if a man be overtaken in a fault, ye which are spiritual restore such an one in the spirit of meekness; considering thyself, lest thou also be tempted. Bear ye one another’s burdens, and so fulfil the law of Christ. For if a man think himself to be something, when he is nothing, he deceiveth himself. But let every man prove his own work, and then shall be have rejoicing in himself alone, and not in another. For every man shall bear his own burden.”

It will be necessary to offer a bit of exegesis of this injunction of Paul to the church. The first question which arises is what does, Paul mean by “Spirit”? Does this refer to the human “spirit” or does this refer to the Holy Spirit, the third person of the Trinity, as He is the Spirit of Christ the head of the church, dwelling in the church as the members? We believe that upon good grounds it can be stated that Paul is speaking here of the Holy Spirit of God, as the Spirit of Christ in the church: the Spirit of Pentecost! This is evident from the entire epistle of Paul to the Galatians. Fifteen times the apostle speaks of the “Spirit” in this letter and always he refers to the Divine Spirit, (Galatians 3:2, 3, 5, 14; Galatians 4:6, 29; Galatians 5:5, 16, 17, 18, 22, 25; Galatians 6:1, 8, 18.) It would lead us too far afield to show this explicitly in each case as used by Paul. We, therefore, merely call attention to the instances of the usages in Chapter 5. It is through the Spirit that we wait for the hope of righteousness by faith. vs. 5. In verse 16 he writes “Walk by the Spirit, and ye shall not fulfill the lust of the flesh.” In the verse 17, 18 Paul speaks of the warfare between the Holy Spirit in us and the flesh. And these two are contrasted in the verses 19 and 22 in the “works of the flesh” and in the “fruit of the Spirit.” It is obvious, therefore, that Paul is speaking of the Spirit of Christ here.

That we live in the Spirit” refers therefore to the new life of Christ, the life of regeneration. It refers to the inward life in our hearts of faith which works by love. What is more this is stated in a conditional sentence of fact. Paul harks back here to all he has taught concerning our living by the Spirit as sons and heirs. This is an established fact. At least thus it is according to the confession of the believers. They have begun in the Spirit. They have subjectively received the Spirit’s benefits by faith. (Galatians 3:2, 3)

If such is the case according to our own confession then it also follows that we ought to walk in the Spirit. The term to walk here is not the same as that used by Paul in verse 16. That term referred to the entire circumference of a man’s existence according to the law of God. The verb here is “peripateoo” in Greek. Here Paul uses the verb “stoicheoo” which means really: to stand or line up in a row. The notion seems to be that the inward life and the outward manifestation must be such that things line up! They must line up and conform to the law of the Spirit of life toward God and toward our brother. Here is the plumbline of heaven in our human relationships in the church. This is not a rule which one brother fabricates for the other in a very arbitrary way, but it is the rule of the King in his heavenly kingdom. It is the measuring of the temple and of each stone in the temple in their confession and life toward each other. It is the commandment which we have: that he who loveth God love his brother also! Such is the status quo which God has instituted in the church by his Spirit. This is indicated by the present tenses of the verbs “live” and “walk!”

Paul also indicates that such was not the case here in the church of the Galatians. The root-sin of every man is pride. It is to be like God. It is the sin of Satan, the father of the lie. Man is puffed up. He blows his own horn pretty loudly if exalted among men, and if in a lesser degree he is gifted he is filled with envy; he envies the brother so easily who has merely a greater position in a relative sense. The difference is merely one of degree and not of essence.

Such was also the sad state in the church at Galatia!

Wherefore Paul writes in verse 26 “Let us not be desirous of vain glory, provoking one another, envying one another.” Such was the actual sad state of affairs in the church. And this must stop! The term “not” in the Greek indicates that Paul is not saying: let it not begin, but rather: let it stop. Let it no longer be with you such that you are desirous of empty glory And vain glory is empty glory. It is a glory which does not satisfy. When once you have it it does not taste good in your own mouth. It is something which is not from the Lord, but it is empty of all real content and it never fits in with a “walk in the Spirit.” Those who attain to it find it to be ashes in the mouth! Cries the apostle: let it stop! Stop in your tracks! It is a grieving of the Spirit in which ye were sanctified to the day of Christ. This glory is then one’s reward, but then the sole reward which does not satisfy. It has nothing to do with: well done, thou good and faithful servant!

There were some in the congregation who were “provocating.” He initiated the evil each time. The reaction was on the part of others who were “envious.” When these two meet there is a horrible collision each time. Nothing is lined up! There is confusion and strife! Meekness of wisdom goes out of the window! “The same disposition which manifests itself in arrogance on the one side, on the other takes the form of discontent and envy. The heart-burnings and the social tension which this state of things creates, make every chance collision a danger; and the slightest wound is inflamed into a rankling sore.” And to quote once more “The stumbling brother is pushed on into a fall; and the fallen man who might be helped to his feet, is left to lie there, the object of unpitying reproach. Indeed, the lapse of his neighbor is to the vainglorious man a cause of satisfaction rather than sorrow. The other’s weakness serves for a foil to his strength. God, he seems to say, I thank thee, that I am not like this wretched back-slider!” (Epistle To The Galatians, by Prof. George G. Findlay, D.D. in Expositor’s Bible)

Hear John say: “If a man says, I love God and hates his brother, he is a liar! For the whole law is filled in one word, even in this, Thou shalt love thy neighbor as thyself I” And this Golden Rule must not be corrupted into a mere utilitarian maxim, as did the Rabbi Hillet who taught “What is hateful to thyself do not to thy neighbor; for this is the whole law and all else is its exposition.” On this Lenski remarks in his exposition ofMatthew 7:12 “This is egoism which withholds its injury lest it suffer injury in return.”

What a golden rule to remember how we would desire to be treated if we were a “man overtaken in a fault.” It is the pity of Christ in our breast. Such a claim the erring brother has upon our sympathy! It were better that a mill-stone be hanged about our neck, and we be cast into the sea, than that we should offend one of Christ’s little ones! 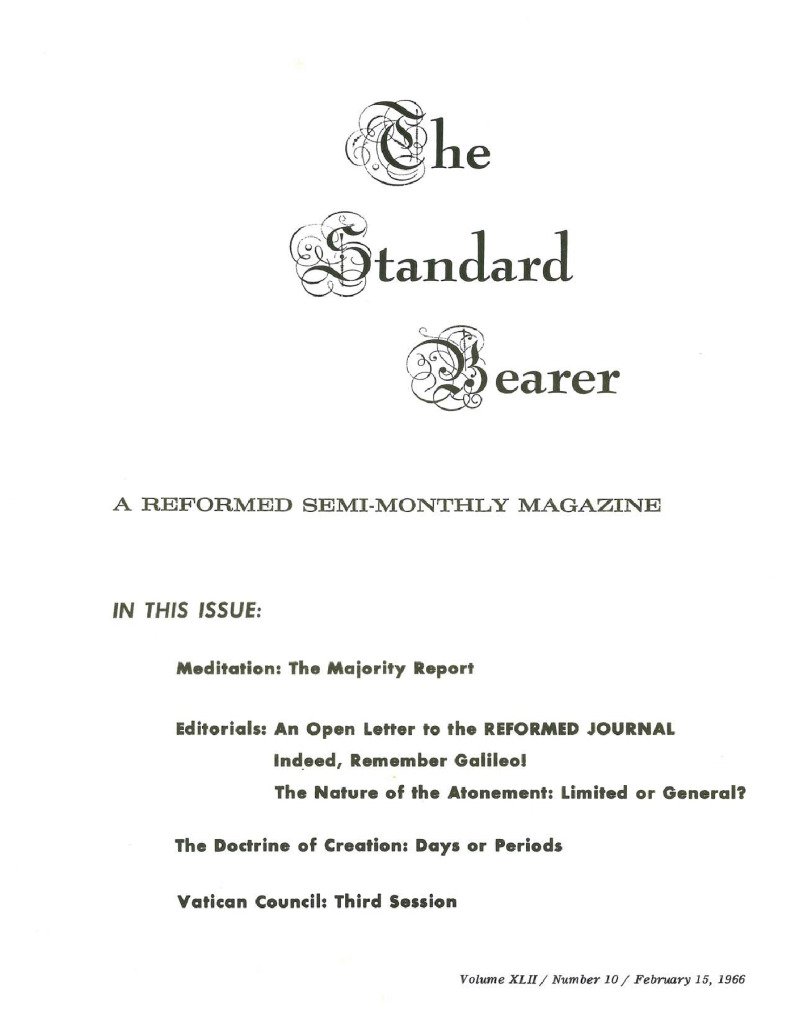