Initially it was a matter of derogation. We read inActs 11 that the disciples of Christ were called Christians first in Antioch. This was quite a witness on the part of the world regarding the followers of Christ. They called themselves by many names: brethren, believers, saints, disciples. But the name Christian was not among them. It originated in the world. The testimony of the world was that the disciples were followers of Christ. They walked in His footsteps. They were indeed disciples in the true sense of the word! For this very reason this most beautiful and descriptive name was sufficient to condemn them to death. During the persecutions of Rome upon the church, that wonderful name was the judge, jury, and executioner of the child of God. Christ had forecast as much when He said, “And ye shall be hated of all men for my namesake: . . .” For Him they suffered shame, were persecuted, and sawn asunder. This is almost enough to make us judge the name ugly on account of its consequences. Yet, it is a most beautiful name! This beauty in all its profound and challenging character will be clearly understood if tie for a few moments pay attention to it.

It is most important for us to understand the idea of a name. Today it has lost its significance almost entirely. Whether we would use names or numbers would make no great difference. Names today merely differentiate one from the other. The Bible, however, attaches much more significance to names! In fact, names are basic to the revelation of God Himself to His people. To point this out I need only call to mind one very well-known example. When God appeared to Moses to give instructions as to his return into Israel to deliver them, Moses asked of God: whom shall I say sent me? “And God said unto Moses, I am that I am . . . I am hath sent me unto you.” God describes or reveals Himself by this name Jehovah which is really nothing more than the verb “to be.” God is the eternal “I am” Who is immutable! So, especially in the Old Testament, names are very significant. This must not escape our attention as we explore our wonderful name, Christians.

To see the full beauty and significance of this name it is most logical for us to begin with Christ Whose namesake we are. As all of us remember from our catechism lessons, that name Christ in the Old Testament is equivalent to the name Messiah and means, “the anointed one.” And as such, Christ stands in, the tradition of those who were anointed to sacred office in the Old Testament. Or perhaps it is better to say that the idea of anointing in the Old Testament was God’s Did Testament picture and shadow leading Israel unto the reality of Christ Who is the officebearer of God par excellence. The significance is quite plain. Oil was a picture of the Holy Spirit. And therefore, very simply, to be anointed to sacred office in the Old Testament signified that one was first of all designated by God to fill a certain office, and in the second place such a one was qualified by the Spirit of God to function in that office. Take the concrete example of David. God sent Samuel to the house of Jesse and pointed the prophet to his youngest son as God’s anointed, and in that anointing God qualified him for that royal position by His Spirit. But this as well as all the examples we take from the nation of Israel are but pictures and foreshadow Christ. For this reason the three distinct offices in the Old Testament, prophet, priest, and king, never came together in one person. For the picture and shadow must always of necessity be incomplete and imperfect. Yet in the fulfillment of the type the three distinct offices come into one. The Bible spells this out very clearly. In Acts, Stephen speaks concerning Moses’ speech to the Israelites, “A prophet shall the Lord your God raise up unto you of your brethren, like unto me, him shall ye hear.” Moses spoke of the Word that became flesh and dwelt among us, God’s prophet! The writer to the Hebrews discovers, for us in extensive detail that Christ was God’s priest after the order of Melchisedec, whose priesthood stood above the Aaronitic. (Hebrews 7) There can be little question about the royal office of Christ. The Scripture is perhaps most plain here telling us that He is the Son of David Who sits upon His Father’s throne everlastingly. But His kingdom is not of the earth earthy but heavenly and glorious.

But you say we have gone so far afield from the consideration of our name, Christian. Not so! In fact we are now ready to progress into the true beauty of our name. I cannot refrain from quoting what I considers to be one of the most beautiful questions and answers of the Heidelberg Confession. I have in mind question 32 and its answer, “But why art thou called a Christian? Because I am a member of Christ by faith, and thus am partaker of His anointing; . . .” Now it becomes plain to us why we understand Him whose namesake we are! You and I partake of His anointing by faith! This means that as we are ingrafted into Christ by faith we are made partakers of His threefold office of prophet, priest, and king. Here is the beauty of our name. It is not so that he is merely our namesake as some of us are named after our father or grandfathers. For there is little beauty here. I may be named after my grandfather and may respect him to the utmost but there is nothing of his character or assets transferred upon me just because he is my namesake! It is quite different with the name Christian! I am not speaking of nominal Christianity, but of the fact that we are called Christians because we are ingrafted into Christ by a true and living faith! It is more than a name. It is a name which designates us spiritually to belong to Christ and to share in His life and merits. His character as the officebearers of God characterizes us. We are Christians! This is not only a name but more. It is a description of what we are.

To carry this glorious name is a wonderful privilege because God has so called us. He could have just as well called us the sons of Beelzebub. It is only by His grace that we are partakers of Christ by faith. It is a gift of God. It is the Husbandman Who grafts into the Vine, not we ourselves. Therefore that name is wonderful because it is wholly undeserved. But more than this, it is all too wonderful that we are prophets, priests, and kings in Christ. Let us consider for a few moments what this means. Christ as prophet is the Word of God, Who is God’s revelation unto us. He reveals unto us the secret counsel of the will of God and makes plain the mysteries of the Kingdom. This He spoke through the prophets of the old dispensation. Thus He spoke when He walked among us. Thus He speaks by His Spirit today. Imagine, we stand in the office of prophet before God and man. This means that God has given unto us the unction of the Holy One whereby we know the will of God and the mystery of salvation in Jesus Christ. The Spirit of Christ enables us to know God and His dealings with us so that we may use His Word as a perspicuous Book to lead us in this life. And what a privilege to be an anointed priest in Christ! The essence of the priestly office is consecration and dedication to God. For this reason in the Old Testament the priest had written upon His garment, “Holy unto the Lord.” Christ exhibited this in the fact that in all things He was obedient unto His Father. It was written of Him, “Lo, I come; in the volume of the book it is written of me, I delight to do thy will, O my God: yea, thy law is within my heart.” (Psalm 40:7, 8) Again. imagine the horror of being able to stand as priests before God in consecration according to the new man in Christ. To be able to love Him and serve Him in the whole of bur life. And we are kings with Christ. The royal power over creation which we lost in Adam is restored in Christ so that we reign over all that God gives to us and make it subject to His pleasure and glory.

But in closing we must be reminded that the wonderful name Christian also designates a grave responsibility and calling. In Christ we are prophets! We are to speak the truth in love. The lie may never be found upon our lips. The confession of God must be continually upon our lips. That means practically, that we must steep ourselves in the Scriptures. For how can the words of my mouth be a confession of my God except I know Him Whom I confess. It is our office in Christ to confess His name! And in Christ we are priests! Paul speaks of this in Romans 12 saying, that we must present our bodies as a living sacrifice, holy, acceptable unto God. My body in all its functions and activities is to be a sweet smelling savor in the nostrils of God. We must be in our lives thank offerings well-pleasing unto our God. Finally, in Christ we are kings! A king rules in his domain and. wages war against those who intrude into his kingdom. Such is the child of God who fights the battle of faith daily, seeking to reign over that which God instructs to him to His glory.

We have a wonderful name. Living in the consciousness of what this name signifies we must walk in His fear! 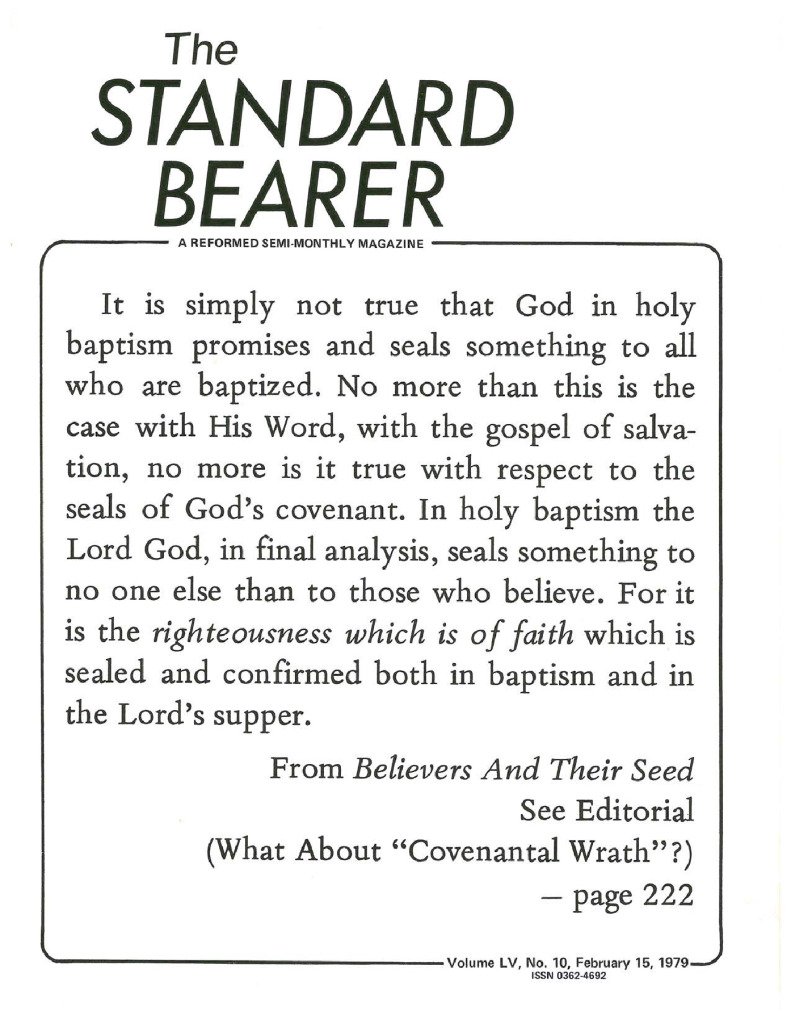