In the last portion of our report, we had left Christchurch, New Zealand, and flown across the Southern Alps of New Zealand and across the Tasman Sea to Melbourne, Australia—some 1800 miles to the northwest. After a 5-hour layover at the Melbourne airport, we traveled another 250-300 miles south over Bass Strait to Wynyard. This was our first stop on the island-province of Tasmania.

The accompanying maps will help a bit in the geography lesson needed at this point. For it must be remembered that both geographically and ecclesiastically this was an entirely new portion of our tour. Geographically, I remind you, New Zealand and Australia are by no means close neighbors, being separated by many miles of ocean. And although they are culturally related, in our brief visit and through admittedly hasty observation we gained the distinct impression that in several respects they are culturally different. Australia, I would say, is culturally much more like the United States or like Canada than is New Zealand. There are even distinct differences between Australia and New Zealand as to the way English is spoken. Perhaps by that time I was picking up a bit of an Australian accent, but at one point in our Australian tour I was even told after a lecture that I spoke “just like an Australian.”

But let us get back to geography. Tasmania lies in about the same latitude as Wellington and Christchurch, New Zealand. Thus, when we were on the Tasman Peninsula in the vicinity of Taranna, we were not as far south as we had been in Dunedin, N.Z. But don’t let the size of the map fool you. Mainland Australia, remember, is about as large as continental United States. And when we made our tour from Tasmania up the east coast to Brisbane, it was roughly equivalent to traveling from Florida to New York City. I hasten to add, however, that Australia is not nearly so heavily populated as our country. By far the largest portion of the population is concentrated in the eastern coastal region; and it is in this part of the country that the largest population centers, Melbourne and Sydney, are found.

Although Tasmania, in the accompanying map, looks very small in comparison with mainland Australia, it is no small island. Actually it is not quite as large as the Lower Peninsula of Michigan. One gets the impression that Tasmania is a bit of an orphan in relation to mainland Australia. Although our pace in the island was nothing short of hectic, life seemed more quiet and slower-paced in Tasmania than in the large urban centers of the mainland. We had one distinct advantage during this portion of our tour: we traveled in Pastor Rodman’s Holden Station Wagon, and thus we had an opportunity, though hastily, to see something of the countryside. It is a ruggedly beautiful country, with profuse vegetation, much forest-land and many mountainous areas, but also many beautiful coastal areas. We had many an unforgettable view of the northern and eastern coastal areas in our travels from Wynyard to Launceston to Winnaleah to Taranna. We did not get to see the fierce animal known as the Tasmanian devil; we did have opportunity to see kangaroos in their native habitat. The chill of their winter season still bothered us, especially at night; but on the whole, we experienced somewhat milder weather than during our stay in New Zealand. However, I can imagine that just about this time of the year would be ideal for a grand sightseeing vacation on the island.

One more item connected with the geography must be mentioned. Traveling another 2000 miles also made another 2 hours’ difference in the time. The total difference between us and Grand Rapids was now 10 hours. And, seeing we were also across the International Dateline, our formula for figuring Grand Rapids time now was: add 10 hours to local time and subtract a day. Thus, when we were in church for our first Tasmanian, meeting at 8 o’clock in the evening on July 4, it was 6 o’clock in the morning of July 4 in Grand Rapids, and probably your neighbor’s children were setting off their first Fourth of July firecrackers.

Our contacts in Tasmania were with the small denomination known as the Evangelical Presbyterian Church of Australia. This contact is a story in itself. The brethren of the EPC had first heard of us through the Rev. Malcolm McKay, of Nova Scotia, Canada, a Presbyterian who had some correspondence with theStandard Bearer several years ago. The common interest between the EPC and our churches was the matter of common grace and the “free offer” of the gospel. Over the past few years, especially through our Reformed Witness Hour printed messages and ourStandard Bearer, we had built up some correspondence. Then in August, 1974 the Rev. Charles Rodman visited for a few days in Grand Rapids; and we had the opportunity to become better acquainted. As this happened, we also discovered that apparently we had much in common as far as the Reformed faith is concerned.

The background of the Evangelical Presbyterian Church, however, is entirely different from ours. You will recall, perhaps, that Pastor Rodman wrote about the origin of their churches in the Standard Bearer last year. (By the way, he still promises to finish that story for us in the future.) But to put it briefly, these churches (and this is true of most of the membership as well as of the ministers) came from a radical, decisionistic, crusade-type Arminian background. Among the membership there are a few who have come from a Dutch and Reformed background; but most of the people are Australian and have had ecclesiastical experiences similar to that of Pastor Rodman. As far as we could discern—and we had much opportunity for discussion as we traveled—these churches, in their long journey from Arminianism via the Baptistic position, have come to the full Presbyterian position in every respect. As you might expect, there are various areas in which their understanding is not yet very thorough. These churches are relatively young yet; and a church grows, of course, as it faces various problems in its ecclesiastical life and as it searches for proper solutions. One of these areas of the truth is that of the covenant. But they are interested in this subject, have studied it, principally understand it, and agree with our explanation. They certainly want nothing of Arminianism in the sphere of the covenant. They are deathly afraid of presupposed regeneration; but they also must have nothing of a conditional promise, as is the view of the Liberated, with whom they have also had some contact in the past.

The one area in which we found a difference was that of so-called “purity of worship.” The purity of worship idea involves an insistence on Psalm-singing in their worship services—something on which we also insist. However, it also involves the elimination of all instrumental music in the services; they sing their Psalms a Capella. In a congregation which is able to sing well, this kind of singing seems to grow on a person; we soon felt at home singing the Psalms with them from the Scottish Psalter. Further, purity of worship also involves the non-observance of any of the Christian holidays in their worship services. Moreover, in harmony with their Directory of Worship, there are no fixed liturgical forms used for the sacraments. In practice, perhaps, we would find their worship to be considerably different. But we must also remember that as long as purity of worship (which is of long standing in Presbyterianism) is not elevated to the status of a fourth mark of the church, there is no obstacle to fellowship here.

I must bring this installment of our report to a close. But before I do so, I must mention a few facts to complete the picture. In the first place, these churches are not limited to Tasmania, although most of their congregations and preaching centers are on that island. There are also congregations and preaching centers on the mainland, especially in the province of Queensland. Near the end of our Australian tour we visited Brisbane, where there is a congregation presently being served by one of their students, Mr. Chris Coleborn. And while we were at Brisbane we made the acquaintance of the Rev. Philip Burley, pastor of the congregation in Rockhampton. We deeply regretted the fact that our schedule did not allow us to spend more time in the Brisbane area and also to make a visit to Rockhampton. For we found real fellowship in the faith with the brethren and sisters of the Evangelical Presbyterian Church. In the second place, it struck me repeatedly that these churches are not afraid to be small, nor are they afraid of small beginnings at their little preaching centers, which, I gathered, are in the nature of church extension outposts. And finally, I must mention that this little denomination has a rather severe shortage of laborers. And while they have instituted their own program for the training of ministers, this is largely by correspondence and on a part-time basis; and it is necessarily a rather slow process. 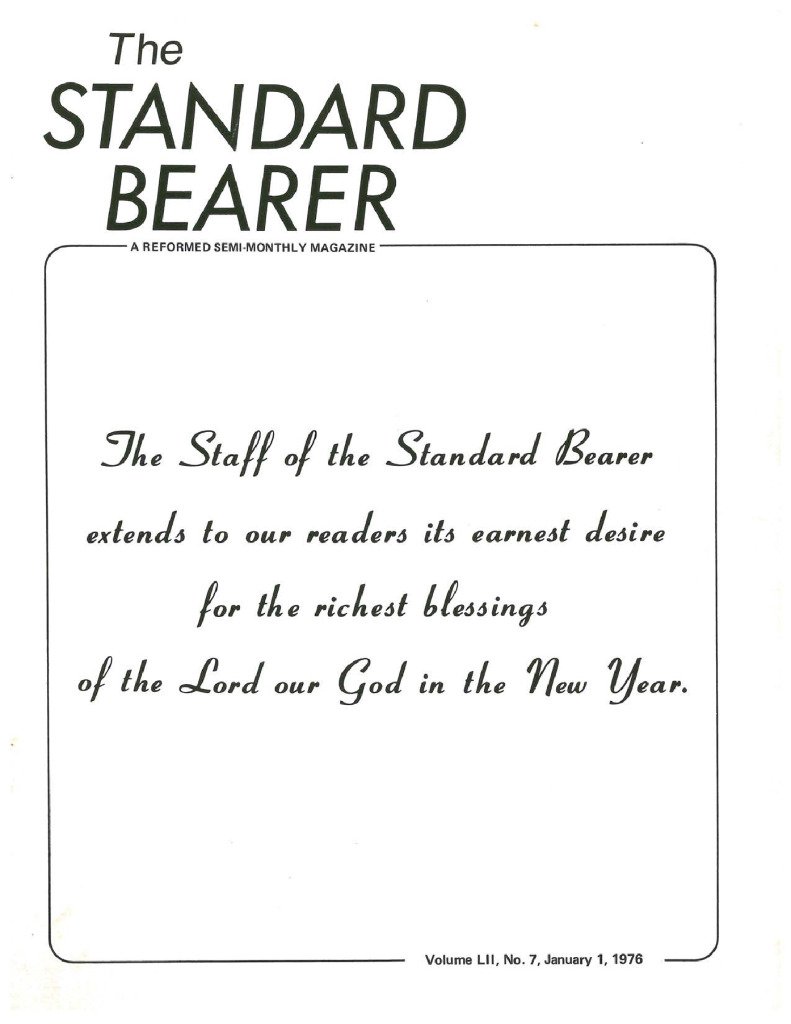