For a proper understanding of our activities in New Zealand, a little background information concerning the ecclesiastical situation in that country is necessary. Our contacts in New Zealand were, for the most part, with people and churches of two denominations. The first is the Reformed Churches of New Zealand. With these, however, we had no official contact; we did have contact with a considerable number of people from these churches. This is a small denomination of Dutch Reformed background which was established in New Zealand after the post-World War II immigration into New Zealand from the Netherlands. In this denomination, according to the latest statistics which were available to me, there are 15 congregations. Five of them are in the Auckland Presbytery (classis); six are in the Wellington Presbytery; and four are in the Christchurch Presbytery. According to their 1974 statistics, the total membership was 2,333. While they have included the Westminster Confession among their creeds, their membership is for the most part of Dutch background; and these churches have never succeeded in attracting many members from the conservative element in the Presbyterian Church of New Zealand. Over the years there have been fairly close ties between this denomination and their sister denomination in Australia, as well as the churches in America and in the Netherlands which are members of the Reformed Ecumenical Synod. Our readers who have followed the accounts of our contacts in Australasia in the Standard Bearer in recent years will recall that this denomination is one of the supporting churches of the Reformed Theological College in Geelong, Australia. Several of the ministers in these churches are graduates of the RTC in Geelong. If we were to compare the various denominations in the Reformed Ecumenical Synod, we would certainly rate the New Zealand Reformed Churches as one of the more conservative, as is also evident from the fact that they have been rather outspoken in their criticism of developments in the Gereformeerde Kerken of the Netherlands. However, many of our readers will recall that this denomination, when confronted by the concrete instance of the errors of Prof. K. Runia, who was at that time teaching in the theological college which they supported, failed miserably to uphold the protests of several faithful members of the denomination. And later, when Prof. Runia left for theNetherlands, these churches bade him farewell with the testimony that he was a champion of the Reformed faith; moreover, they did not warn the churches in the Netherlands concerning his errors at the time. This crisis led to the separation from that denomination of several members, especially in the Christchurch and the Wellington area. Probably because of their close contact with sister churches in the Reformed Ecumenical Synod, these churches are afflicted by many of the weaknesses which are also to be found in varying degrees in other Reformed denominations today. In our judgment, this denomination can hardly be said to maintain a strongly Reformed stance; and we were confirmed in this opinion by a good many people of these churches with whom we came into contact. Especially in the Auckland area we met a goodly number of people from this denomination who not only gave us a hearing, but showed considerable interest in our distinctively Reformed testimony, as well as expressing dissatisfaction with the situation in their own churches and a desire to grow in the Reformed faith. We may also note that the Christian school movement is not strong in New Zealand. This may be due in part to the smallness of this denomination; nevertheless it was not until this year that the very first Christian school was opened by parents from the Reformed Churches. What I have written above is not to be taken as a blanket characterization of all the churches and ministers. It is rather a characterization of the denomination as a whole.

The second group of churches, and that with which we had considerable contact and from whom we received a very warm reception, is the young denomination known as the Orthodox Presbyterian Churches in New Zealand. Lest there be any confusion on this score, we mention from the outset that they have no ties with the Orthodox Presbyterian Church in America. The subordinate standards of these churches are the Westminster Confession of Faith, and the Shorter and Larger Westminster catechisms. For the most part, the membership of these churches has come from the large and liberal Presbyterian Church of New Zealand, one of the mainline churches in that country which is at present involved in a huge merger movement with other liberal denominations. It was especially this merger movement which. precipitated separation on the part of several conservative ministers and parts of their congregations, beginning in 1969. There are fivecongregations or preaching stations in this group of churches. There is a congregation in Manurewa (a suburb of Auckland), where the Rev. George McKenzie is pastor. Other locations on the North Island are Whakatane (in the Rotorua area) where the Rev. J.A. Mitchell labors, and Napier-Hastings (in the Hawke Bay area) where the Rev. G.A. Adams is minister. At this stage I may mention also that there is an unorganized little group in Wellington, consisting of men who separated from the Reformed Church, who have recently also been in contact with the Orthodox Presbyterian Churches. More about this later. On the South Island there is a congregation in Christchurch. This is a young congregation, very recently established, with the brethren W. van Rij and A. Young as elders. They are without a pastor. There is also a congregation in Stoke (Nelson) at the north end of the South Island. This congregation separated from the Presbyterian Church of New Zealand a little more than a year ago, under the leadership of their pastor, the Rev. Ivo G. Bishop. We may add that this little denomination has not as yet assumed its final ecclesiastical structure. As yet they have not formed a Presbytery. But they do meet quarterly in a Council, which is expected eventually to evolve into a Presbytery. Recently these churches have also begun publication of their own quarterly magazine, theGospel Witness, a commendable and respectable effort, which compares favorably with many other religious magazines published by Reformed or Presbyterian people. Incidentally, we may mention that they have already requested and received permission to take over in their magazine materials from ourStandard Bearer. We believe that this magazine will also serve as a means of acquainting others with this young denomination. In our contacts among these churches, we met with a very warm and friendly reception, found the people ready to receive instruction and, on the whole, very receptive to the Reformed truth.

We may also mention that when we came to the people and ministers of these denominations in New Zealand, we certainly were not entirely unknown. We have become known to a good many people through our literature, both our Standard Bearer and our books and pamphlets, chiefly through the distribution efforts of our good friend and brother, Bill van Rij. Moreover, without boasting, I believe that I may truthfully say that among many of these people we are respected for our distinctively Reformed position.

A word or two about the general ecclesiastical situation in New Zealand may conclude this description. We have already made mention of the mainline Presbyterian Church there. And in general, the situation in that church and other large denominations in the country is very much like that in our own country. In a word, they are liberal. In fact, they have been liberal and heterodox for a long time already. But as is also true in our own country, there remained in some of these churches pockets of conservatives. And it seems as though especially the merger movement of recent years has been a sort of catalyst, serving to awaken some people and to precipitate separations. We expect that a degree of such separation will continue for a time, but it is not to be expected that the separatist movement will be large. Nevertheless, there appears to be a definite possibility of growth for the Orthodox Presbyterian Churches. And they are to be encouraged and helped as much as possible. Moreover, they must by all means understand that their only expectation of sound and healthy growth is in maintaining a distinctively Reformed stand on the basis of their Presbyterian Confessions. And it is our hope and prayer that the Lord our God will give them the spiritual strength and courage to maintain such a distinctive position. Certainly, as far as the Presbyterian faith is concerned, the mainline denomination is far down the road. Perhaps some of our readers will recall that several years ago our Standard Bearer reported concerning a controversy in that denomination involving Prof. Geering, who denied the resurrection and the life hereafter. He was an instructor at the Knox Theological College of the Presbyterian Church in New Zealand. I had opportunity to inquire of a student at that school concerning the present situation there. It has deteriorated today to the point that, according to this student, there is no one of the faculty who even believes the truth of vicarious atonement; and there was only one faculty member who would as much as concede that the doctrine of vicarious atonement was an option. That will give you an idea of the sad situation in those churches and of the sore need of reformation through separation.

With characteristic efficiency and organizational ability, brother van Rij had planned a busy tour for us in New Zealand. He saw to it that there were no wasted moves and not many leisure moments. And all our meetings were well planned and well advertised. Moreover, we had been briefed as much as possible before we left our home shores as to what to expect, what kind of questions were uppermost in people’s minds, what kind of subjects should be discussed, and what would be good subjects for lectures. Without friend van Rij’s help in organizing and planning our tour, we certainly would not have been able to cover the ground we did nor would we have accomplished as much as we did. Our sincere thanks to him and to all who assisted him!

With this we must conclude our report for this issue. Next time, the Lord willing, we will relate some of the details of our various visits in beautiful New Zealand. 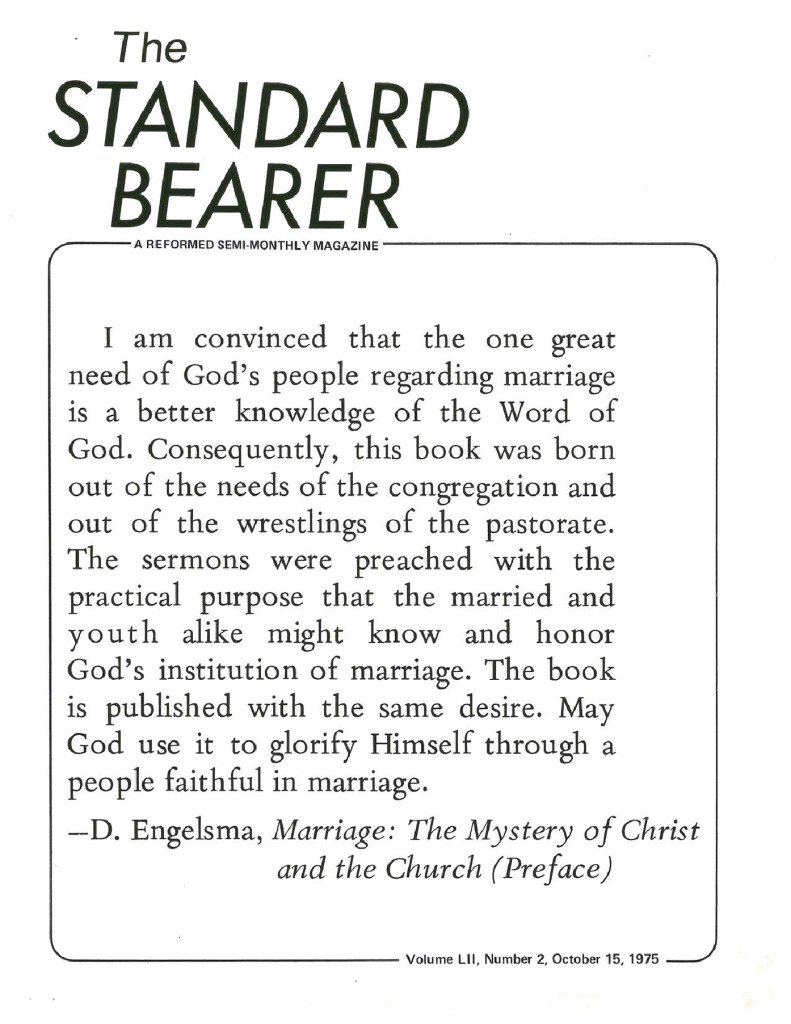