Our Approach to the Problem of Alcohol (3)

Our Approach to the Problem of Alcohol (3)

Last time we listed the “Twelve Steps” of Alcoholics Anonymous. The “Twelve Steps” contain A.A.’s basic approach to recovery from alcoholism. Without going into great detail, we have serious objections to A.A., objections which make it impossible for us to recommend the use, especially the extended use, of A.A. What are these objections?

This failure to view alcoholism as sinful shows itself in all of the A.A. books and pamphlets. In a pamphlet entitled, “A Clergyman Asks About A.A.”, this question is asked: “Does A.A. regard alcoholism as a sin?” The answer is given:

As a fellowship, A.A. is committed to no theological concept of alcoholism. A.A. members may be said to be concerned more with handling the problem of alcoholism than with defining it. Within the Society, there is, of course, complete freedom for the individual to express his own viewpoints on this question. Most members regard alcoholism as an illness that cannot be cured but can be arrested by alcoholics who honestly attempt to practice the Twelve Suggested Steps in all their affairs.

Secondly, the God presented by A.A., the “Higher-Power” whose help the alcoholic is to seek, is definitely not the God of the Scriptures and of the Reformed faith. A.A. does profess belief in a god. In several of the “Twelve Steps” mention is made of God and of “God, as understand Him.” In “A Clergyman Asks About A.A.” we read:

Reliance upon a Higher Power is, however, central to the success of most men and women who have achieved sobriety in A.A. To many members, this Higher Power is a personal God, to whom they turn for help in achieving and maintaining sobriety. (p. 10).

In Hope For the Children of Alcoholics we read:

We don’t have to get hung up on God, or imagine Him as a Person. If we can’t think of the “Higher Power” as God, we can interpret this step as realizing we don’t know everything and other people can help us. The group can be our higher power. If we keep an open mind and really listen for new ways to handle our problems, we will find we won’t have to be alone. (p. 13).

For the most part, A.A. does not attempt specifically to define God, or this so-called “Higher Power.” His identity is left indefinite. In the “Twelve Steps,” after “God” is usually added the phrase “as we understand Him.” Yet, in a way, A.A. does in fact define its god. From all the A.A. literature it’s very clear that the god of A.A. is not the Sovereign God of Scripture and the Reformed faith, but a weak, helpless, beggar-god who is dependent upon man. He is the kind of God that we conceive Him to be. He is the god of the universalist who loves all men and desires to make all men happy and secure. And above all, He is a god who does not have a Son, Jesus Christ, who saves men from their sins. Never does A.A. speak of Jesus Christ. Because of this false, unbiblical teaching concerning God, we disapprove of A.A.

Thirdly, we object to A.A.’s view of man, which is essentially a Pelagian and Arminian view of man, teaching that a man is saved by his own efforts and his own will-power. In the book One Day, At A Time, the alcoholic reader is reminded, “I am the master of my fate; I am the captain of my soul,” and, “God helps those who help themselves.” This Pelagian-Arminian view of man comes out in the “Twelve Steps,” especially in Step #3: “Made a decision to turn our will and our lives over to the care of God, as we understood Him.”

Ultimately, A.A. puts the cause for deliverance from alcoholism, not in the sovereign, saving grace of God, but in the power and efforts of the alcoholic himself. Alcoholism is a terrible thing, but not so terrible that man cannot save himself. Ultimately, the alcoholic is his own savior. On account of this very clear denial of man’s total depravity and salvation by grace alone, we cannot recommend A.A.

Besides, in the fourth place, we are concerned about the fellowships and associations struck up through A.A. All different kinds of men and women attend the A.A. group sessions. Many are agnostics, atheists, and humanists. Not only are they not Reformed, but they are outright godless and unbelieving. Attendance at these meetings, we believe, encourages fellowship with unbelievers. These meetings are for encouragement and for mutual support. How is this possible if the majority of an A.A. group are not children of God? It is the testimony of more than one of our ministers that attendance at A.A. meetings, especially by young men and women, was a means to wean these people away from the church, so that they eventually left the church. Because we are concerned with fellowship with unbelievers, we cannot recommend the use of A.A.

Our Approach to the Alcoholic

We cannot use the approach of A.A., we feel. But what, then, must be our approach? Will we approach the alcoholic? Or will we abandon him? We must approach him.

Our basic approach must proceed from our insistence that alcoholism is sin. Oh, this brings out the urgency of our need to reach out and help the alcoholic. Don’t you see: alcoholism is sin. That means that the alcoholic is on the road to hell. He needs our help desperately! We MUST make an approach to the alcoholic! The officebearers must, the pastor and the elders. So must the members of the congregation. We’re not always so ready to do that. We hear about someone’s alcoholism and our first reaction is that we have contempt for the brother, we put him at arm’s length, and deliberately avoid him and his family. But this is wrong. Just ask yourself: Where would I be if the Lord took this kind of attitude toward me on account of my sins? We must approach the alcoholic.

In our approach to the alcoholic, we must not only recognize that alcoholism is itself sinful, but we must recognize that usually alcoholism is caused by other sins. Usually other sins lead to the sin of alcoholism. The alcoholic is filled with fear, anxiety, is unable to cope with the responsibilities and pressures of life. For some reason the alcoholic is unable or unwilling to face the realities of his life. He cannot handle life. And so he turns to alcohol, the bottle becomes his “enabler,” his god. Basically, the sin lies behind his alcoholism in his refusal to trust in God. This deeper sin is especially the sin we must address in our approach to the alcoholic. We mustn’t be concerned only with his alcoholism, but with what lies behind his alcoholism.

This doesn’t mean that there is no place for a treatment center for alcoholics. I believe that there is such a place, even an important place. But I believe that their use should primarily be for what is technically called “detoxification,” that is, for getting the alcoholic sober and free from his physical dependency on the alcohol. He must be “dried up,” after all, before you can bring him God’s Word and before he’s in a condition to receive instruction from God’s Word. In my own mind, I’ve thought of it like this: Suppose a promiscuous fornicator, a whoremonger, comes to me for help. As a pastor and as a Christian, I’m called to help that man. But the help that I give the man is spiritual help, instruction out of the Word of God concerning a holy life. But for this man’s venereal disease, I send him to the doctor. As a minister I can’ttreat his venereal disease, and it’s not even my calling. For that aspect of the problem he needs a doctor. The same applies, I think, to alcoholism. This sin, too, has consequences in our physical life. For those consequences the help of a treatment center may legitimately be sought. But for what is the root of the problem, the sin problem, what is needed is the Word of God. And since it is the church which preaches and teaches the Word of God, the place where we must seek help for alcoholism is in the church.

In this way our approach will be an approach that brings about reconciliation between the alcoholic and God, as well as between the alcoholic and the church. The church must receive the repentant alcoholic with open arms. It’s a shame, a dirty shame on us that the recovered alcoholic has to go to A.A. for fellowship and encouragement because he can’t find it in the church. We must be the kind of people who receive the repentant alcoholic and who stand ready to assist him and encourage him in his life-long struggle against this besetting sin.

Let it be emphasized that our approach to the alcoholic must be a humble approach. We must never approach the alcoholic with a holier than thou attitude. But we must approach him humbly. That means that we must approach him in the consciousness that we ourselves are sinners, the chief of sinners. His sin is not foreign to us. The apostle points this out to us in I Peter 4:3: “For the time past of our life may suffice us to have wrought the will of the Gentiles, when WE walked in lasciviousness, lusts, excess of wine, revellings, banquetings, and abominable idolatries.” We are given to excess of wine. This is our nature, too. And if you don’t know that about yourself, you don’t know the depravity of your nature. The alcoholic’s sin is our sin. We too are those who do not trust in God, who often are driven to despair because of the problems and trials of life. What causes him to turn to alcohol, causes us to turn to other things. We know his sin in our own experience. Because we do, we approach the alcoholic humbly. We don’t point the finger at him, but together with him we go to the cross and with him beseech forgiveness in the blood of Christ. We may be confident that this approach will be blessed by God. James puts it like this in James 5:19, 20: “Brethren, if any of you do err from the truth, and one convert him; let him know, that he which converteth the sinner from the error of his way shall save a soul from death, and shall hide a multitude of sins.” 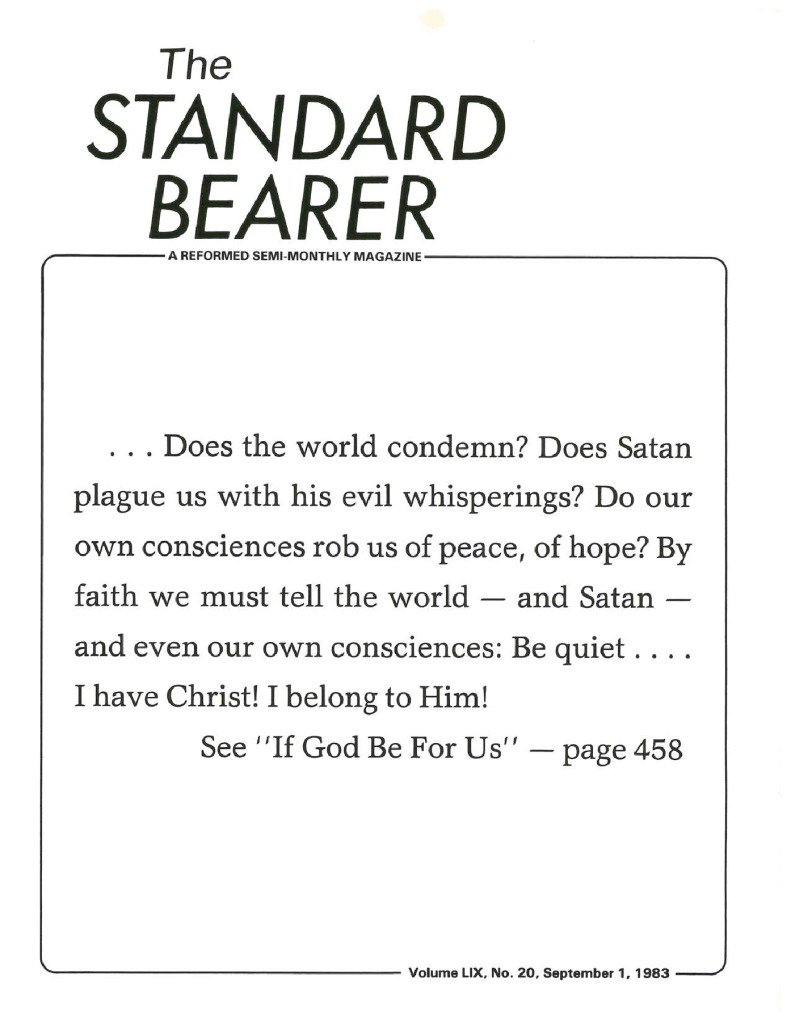