Origen and His Legacy

We have now come, in our consideration of the development of the doctrine of Scripture, to a point at which the various trends and movements of the early church’s understanding of the Word of God and its principles of interpretation come together in the writings and labors of the church father, Origen. Origen was born in A.D. 185 in Alexandria of Egypt. He was a very gifted man, so much so, that when Clement of Alexandria, of whom we spoke last time, was forced to flee the city because of persecution, his pupil, Origen, was made head of the catechetical school there in 203 at the age of 18. Like his teacher Clement, he showed a fondness for philosophy and allegory and made it a significant element in his approach to Scripture. He had an active and fertile mind which rendered the church invaluable service in bringing together in a systematic way the learning of his day. He also, however, took delight in speculative reasoning which led him to set forth new and strange doctrinal views, which were matters of controversy in his own day and were condemned by the church in following centuries as being heretical. It is difficult to make a proper assessment of Origen. In fairness to him it must be pointed out that he lived in a period in which the church had yet to develop any settled doctrinal position concerning even such basic beliefs as the Trinity. His labors served the early church, both as a source upon which the church drew positively and to which it also reacted negatively. In both ways, God used him in the development of the church’s doctrine.

In harmony with the growing trend in the church to world-flight, Origen lived a life of ascetic self-denial. Under the influence of Gnosticism and Greek Stoicism the church had begun to incorporate into her thinking the false idea that matter was evil in itself. This led the church to confuse the distinction between sin and grace, spiritual and carnal, with the Greek idea of mind and body. The result was that the Scriptural idea of conversion and the distinction between the old man of the flesh and the new man in Christ became externalized into a distinction between nature and grace, body and spirit. Mortification of the old man of the flesh therefore came to be conceived of particularly in terms of subduing the lusts of the body. And thus celibacy (abstaining from marriage), fastings, and other bodily exercises were viewed as special acts of piety. The fruit of this trend in the church as it ultimately developed, was the monasticism of the Middle Ages. Even the great theologian Augustine was not free from this thinking and after his conversion lived in a celibate state.

Origen reflected this trend in his own life and carried it to the extreme. Taking the Lord’s commands in Matthew 10:10 and Luke 10:4 literally, he owned but one coat and no shoes. He gave himself to study and prayer, sleeping little. In a similar way he approached the passages ofMatthew 26:31-33 and Mark 9:42-47, that if thy hand or thy foot offend thee cut it off, and applying this to Matthew 19:12, that there be some which have made themselves eunuchs for the kingdom of heaven’s sake, Origen emasculated himself, that in his role as a teacher, also with female students, he might not give any occasion for talk or a sin against the seventh commandment.

By his scholarship, extensive labors, and letter writing, Origen not only spread his influence within the church, but also received respect from some in the heathen community for his learning. This eventually led to jealousy and conflict which forced him to leave Alexandria and settle in Caesarea where he founded another catechetical school. During the reign of the Roman emperor, Decian, he was cast into prison and tortured for his faith. He was condemned to die, but was set free when Decian died. Not long afterward Origen himself died in about 254, partly as a result of his injuries and imprisonment. Origen taught a threefold approach to Scripture. In the first place, he emphasized a literal approach to the truth of Scripture and stressed a need for careful grammatical study of the text of the Word of God. In the second place, he taught that beyond the literal sense of Scripture lay an ethical or moral level of meaning which arrived at a deeper understanding of truth and morality. And finally, he also saw in Scripture a mystical or spiritual level of meaning by which one, through the use of allegory, arrived at the deepest eternal truths of the Scriptures. He proceeded to set forth this threefold method of interpretation and to lay down the principles of its use.

Origen’s application of his own method of interpretation is a study in inconsistencies. On the one hand he labored much with the text. He developed the earliest study of the text of the Old Testament by setting, side by side, the Hebrew and various Greek versions in a multi-language parallel text which included notes and comments. The purpose of this text was a defense of the Greek version of the Old Testament known as the Septuagint which Origen regarded as the inspired version.

He also wrote numerous commentaries on Scripture which included not only notes on the Scriptures, but also extended expositions and practical suggestions for preaching and applying the text and its meaning. These works, especially because of their systematic character, had a wide influence in the church. At the same time he consistently makes very little of the literal meaning of Scripture in his work, rarely using the moral or ethical approach which he had proposed and frequently using the allegorical method even where he violates his own principles in its use. His constant use of allegory in the historical books of Scripture often flies in the face of the plain meaning of the text and undermines it.

This threefold principle of interpretation which Origen set forth and the principles of its application were actually just a refined systematizing of the approach of the school at Alexandria and of his teacher, Clement. In his hands the Scriptures became a book of hidden puzzles and mystical symbols whose meanings are hidden from the ordinary believer and can be known only by the spiritual elite. This thinking was to make its presence felt in the church for many centuries. It contributed to the development of the idea that the Scriptures were not for the laity, and that the majority of believers who lacked this mystical insight could not properly understand the Word of God for themselves.

The effects of Odgen’s teaching were twofold. In the first place there arose in Antioch a school which repudiated the allegorical method and fought against it. This school was itself indebted to Origen, however, for its principles of grammatical and literal interpretation. It was founded by Diodorus of Tarsus toward the, end of the fourth century and with him, Theodore of Mopsuestia. The latter in particular did much to develop a sound grammatical, historical, and spiritual approach to exegesis and the study of Scripture. Out of this school were to come some of the best thinkers of the early church, the defenders of the orthodox doctrines of the Trinity and of the person and natures of Christ. In Chrysostom, a friend of Theodore, the church was to receive one of the ablest preachers of the era. Eventually, however, this school lost its influence over suspicions of heresy in connection with the Nestorian controversy over the distinction between the person and natures of Christ.

In the second place, however, the school of Alexandria and its method, as systematized by Origen, lingered in the church and gained a solid foothold. While it is true that the allegorical or mystical method was not used with the same excesses of Origen and the Alexandrians, it nevertheless shaped the church’s whole approach to Scripture. It was imported into the Latin-speaking Western branch of the church in the writings of Hilary of Poitiers who labored in France in the middle 300’s and by others. One finds also such Latin church fathers as Jerome using this approach to Scripture. Even Augustine, the great theologian of the fourth and fifth centuries often used this method of interpretation.

The general effect of Origen’s work then was, positively, to clarify a sounder approach to Scripture through careful study of the grammar of the text. At the same time, however, he submerged that study in a speculative system which would prevail in the church for many centuries. With these developments the church’s approach to Scripture began more and more to depart from the more solid foundation of its beginning. Even as the era of persecution subsided and the greatest developments in the church’s expression and understanding of the doctrines of the Trinity and Christ’s divinity and humanity were occurring, the church was, at the same time, drifting gradually away from a clear conception of the Word of God. This drift was not rapid, but as the faulty principles of allegory and mystical interpretation became rooted in the church, they also became a part of the church’s tradition of exegesis and interpretation, perpetuating themselves until the time of the Reformation. 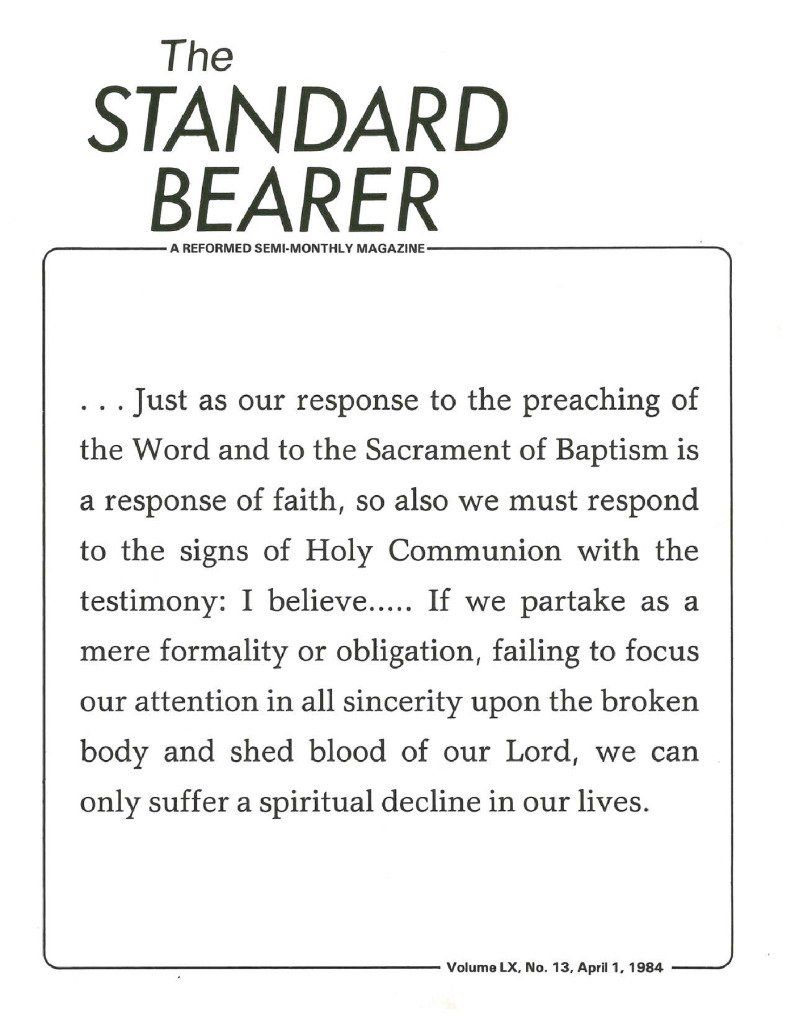