This past June the Ontario Government took another step forward in its push to revolutionize family law in Ontario by its adoption of Bill 89. Bill 89, also known as the “Supporting Children, Youth, and Families Act,” is the fifth bill in as many years that represents the swift advance of a left-wing social agenda in Ontario.

Why is this significant? It is significant because it appears to give the government the right to remove children from the custody of their parents if it is believed that the parents are harming a child by failing to properly respect and support that child’s gender identity and gender expression. If a teenager begins to identify as LGBT, and that teenager’s parents tell him that his identity is wrong and he should change, that could be considered a form of abuse and a reason for taking that child away from his parents. In fact, this is what Ontario’s Minister of Child and Family Services himself said: “I would consider that a form of abuse, when a child identifies one way and a caregiver is saying no, you need to do this differently…. If it’s abuse, and if it’s within the definition, a child can be removed from that environment and placed into protection where the abuse stops.”2

ARPA Canada also reports the following: “Bill 89 also signals a potential shift towards greater readiness for children’s aid societies to intervene in family affairs…. The implication [of Bill 89’s wording] is that intervention should not be presumed to be more disruptive than nonintervention.” 3 In other words, with this bill the government is giving more encouragement for child protection agencies to take children out of their homes if these agencies feel parents are not supporting their children’s gender expression sufficiently.

This is simply radical and disturbing. Not only is this turning the authority of the home on its head, so that the parent’s authority over the child is limited by the “creed” of the child and what the child chooses to do or believe; but this is also the government effectively dictating to parents what their gender ideology needs to be. If a parent refuses to affirm the liberal gender ideology of the radical left-wing government, the children of that parent may be considered “in need of protection” by the state and be removed from the care of that parent.

What should Christians think about these things? How are we to respond?

In an essay entitled “What’s in a Name? Why Christians Should Be Wary of the Word ‘Transgender’” Andrew T. Walker, writing for Public Discourse, says something that pertains to the issue:

The Christian worldview cannot countenance a movement that plays haphazardly with biological sex and the promise of self-resurrection. The picture seen in the first two chapters of Genesis is one where divinely orchestrated binaries are fixed, intentional goods: Heaven and Earth, Night and Day, Land and Sea, Male and Female. The Christian worldview can, however, countenance a world like that of the third chapter of Genesis—a world in which people have broken perceptions of themselves brought on by the Fall.

The Christian worldview accepts the validity of people’s testimony that gender dysphoria [gender iden tity disorder—EJG] is a real experience resulting in heartrending distress. The Christian worldview cannot, however, countenance the idea that men can become women or that women can become men. No amount of self-assertion or self-description, no matter the vehement sincerity, can result in individuals reconfiguring their chromosomes. Seen from this view, to exist as “transgender” is, itself, a social construct offered up by revisionists.

This is why simplistic or unwitting uses of the term ‘transgender’ are problematic. The culture has intentions for the word that are incompatible with Christian anthropology. The culture wants individuals to accept, without a hint of hesitation, the idea that surgically altering one’s body can make a person a member of a different biological sex. Transgender may describe the range of experiences that people encounter, but for those in control of the word throughout dominant culture, “transgender” bespeaks a much weightier construct that Christians should be wary of casually adopting. “Transgender” is a neologism chock full of ideological assumptions that Christians cannot innocently use.4

Although Walker is talking specifically about the use of the word “transgender,” his line of reasoning applies also to the Ontario Government’s adoption of Bill 89. To me, the danger for Christians living under a law like Bill 89 is that Christians become so accustomed to how society and government define and understand gender issues, that they lose their grasp of how the Bible itself defines and understands gender issues, and of how they as Christians should be defining and understanding gender issues. To explain what I mean, let me refer again to the essay quoted here:

Cultural debates come packaged with new words and concepts. By creating ‘constructs’ that give names to subjective theories, progressives attempt to crystallize their social theories and give them the appearance of ironclad certainty.

Those who control the language control the terms of the debate. Words create and confirm ideas, and if new words can give meaning to new concepts, over time, these concepts become unquestionable as we grow accustomed to their usage.5

The writer is talking about the word “transgender.” But what he states does not merely apply to new words; it applies to new laws as well—laws such as Bill 89. New laws confirm ideas, and if new laws can give meaning and expression to these new ideas, over time these ideas start to become unquestionable as we grow accustomed to the laws.

So, the challenge of Bill 89 is that it promotes and further legitimizes a theory of gender that is simply at odds with God’s ordering (and the Bible’s revelation) of human sexuality and gender. And the more we speak about gender as the government speaks about it, the more we will be inclined to drift away from a biblical understanding—that God created mankind simply as male and female.

To put this in different words, I can put it this way: The Ontario Government’s adoption of Bill 89 (along with all the other bills it has adopted recently) is simply what happens when you give up the authority of Scripture and you attack the literal history of Genesis 1-11. When you take away the account of how God made man and woman in the beginning as male and female, you take away your entire foundation for understanding human identity and human gender issues from a biblical perspective. Our challenge is to continue to maintain that foundation God had given us, in the face of a culture that rejects everything contained in Genesis 1-11. There is a reason Satan likes to cast doubt on the literal historicity of Genesis 1-11—it influences everything.

2 As quoted in the same article. 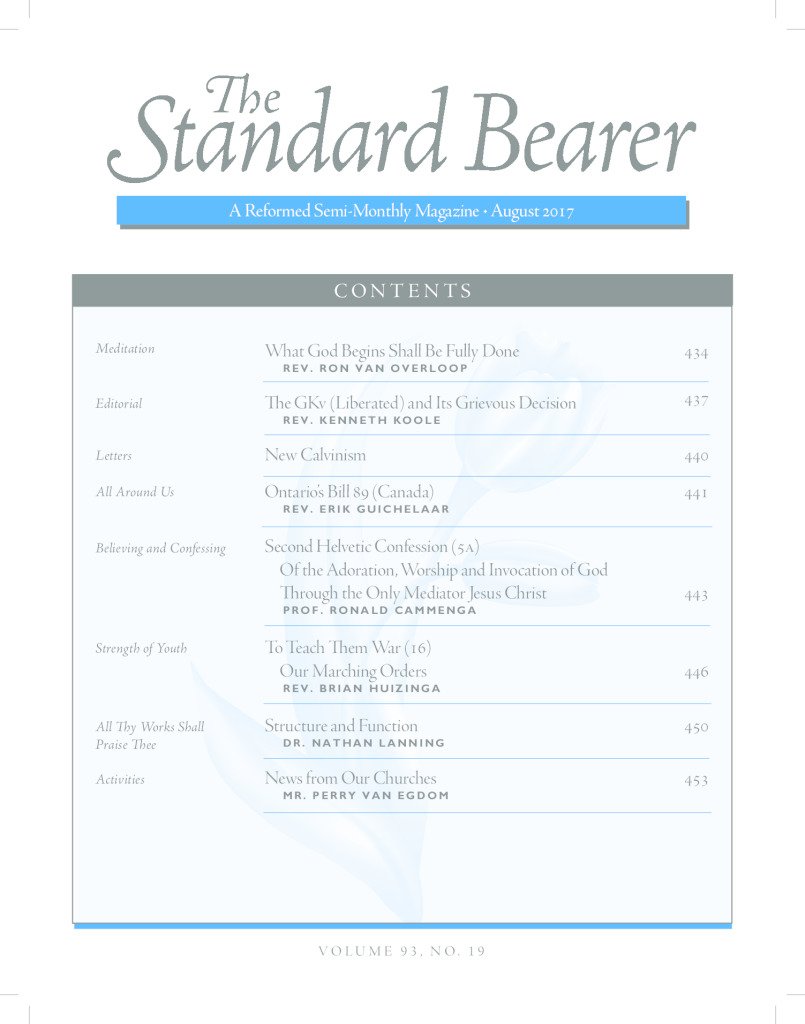