There’s this article in front of me entitled “‘Do or Dye.”

The title refers to hairdos. Seems nowadays that if you don’t perm or spike or shave or braid or bleach or color your hair or go with girls that do—you are not much.

Just another of the many ways this strange world we live in is calling us to “Get a life!” ‘Do or Dye! Color your hair blue, spike it, or you simply are one of those conformists with the flat EKG.

In a recent article we have mused about this world’s call to “Get a life!”

Seems that there is some ideal life, the nature of which is often defined, at least for us in the US, by folks from either of our east or west orifices. Maybe in Hollywood. Maybe on Broadway. There’s lots of intense philosophical work going on behind the scenes and where all the world is a stage to discover the meaning of life and to urge the rest of us wannabes and deadlings to get with it and get with them, with their styles, their values, their politicians, their religion.

Many things of this “life” to which we are called change. It’s hair today. It’s gone tomorrow. Hula hoops. Bell-bottoms. Pink hair. Punk rock. But one thing remains: the life the world wants us to get is a life without God.

Now we know that is absurd. There is no life without God. Really! For all the glamour and glitz and prestige and power and wealth and world you can get if you get the life of Madonna, still you are a dead man or a dead woman according to the Word of God. For this, this, this! is eternal life: that they might know thee the only true God, and Jesus Christ whom thou hast sent (John 17:3). And this, this, this! according to the Word of God, is the state of all of us in Adam: dead in trespasses and sins (Eph. 2:1). And this, this, this! is the profit of a man, woman, or child and the whole troupe of them which gains the whole world, gets all the life that the world would breathe into us: zilch.

As concerns Christian youth: I would urge you, young people and young adults, to consider the force and the wiles of this “Get a life!” appeal. For there is a god behind it: the god named “Devil.” And according as you are you, just you, you are little old sinful you, and the Devil’s mincemeat. If left to ourselves tomorrow our hair would be blue, and life would be a bungee jump, but our spiritual heart would be ripped out of us.

Five reasons “Get a Life!” is a deadly threat.

First, the “Get a Life” people are in the vast majority. So, for example, many people think THE LIFE is a beach, and especially a naked beach. Skin is in when it comes to suiting up for summer fun. People just like to strut around and lay out and bob up and down in public waters in what amounts to little more than underwear. The temptation is to believe the majority report on what is acceptable swimming attire. To do what everybody is doing—revealing itself. To be modest only when the Baptist Camp tells us to be.

It is tough, I know. When a whole society and culture are doing something, and selling only loin clothes for clothes, and when the Bible does not say that this number and this number only of square inches of flesh may be revealed, why not just swim with the Romans? What’s a young Christian to do? Is there such a thing as a Christian bathing suit and Christian beach? Christian bikinis? Can you say oxymoron?

But then, moving on—the same “Get a Life!” majority controls and corrupts most of the television programming, the video games, and the radio. It tells us that Sunday is just a fine day to work and to play, and would convince us that one can be homosexual and morally straight. What are a few Christians to do against such overwhelming numbers? There is a great power in the numbers, an almost irresistible tug to go with the flow right down this world’s river no matter where it is flowing. Yes, the Force of The Many is with them, and not with us!

Second, the “Get a Life!” message sounds so urgent. It is not, after all, as if the “Get a Life!” people are calling you to eat asparagus tips. Whether it is subtle or shouted, the message is of life and death. GET A LIFE! they shout. Like there must be people all over the place, even standing over there talking, or working, or driving down the road—dead! Even so dead that they are in so many early and latter stages of social or intellectual or physical or religious rigor mortis. The Get a Life! people call for nothing less or different than a general resurrection. They leave you thinking: if I am not doing the calling (the calling to Get a Life!), I must be among the called, and therefore among the lifeless.

Third, Get-a-lifers can sound so kind—like they are offering you, well, the world. They really play up their Life. It is the life like Victoria, or Brad, they say. A life of exciting secrets. A life of glitz. A life of adventure. A life of good times. The real thing. Fun. Pretty women. Strong men. A life of good too. An easy-going tolerance of all (which is good for your blood pressure and mine). Opportunities to save the rain forest, and feed the poor. And religion. Even Church Life at—La Grave. And RESPECTABILITY!—Well, who could refuse such a kind call to such a kind of life?

Fourth, the Lifers appeal to our own deeply imbedded love of stuff. Lifers, posing again as our True Love, come bearing gifts, gifts, and more gifts of the things which we so easily crave. Why, here’s twelve snowmobiles! Here’s eleven jet skis. Ten ’65 convertible Mustangs (White. 3-speed. 350 or 351 engine or something like that)—and a partridge in a pear tree! And we think: why yes, I may have these. God has given the good things of the earth to be used and enjoyed. And we forget texts like I Timothy 4:5. And virtues like moderation. And concepts like Christian stewardship, and seeking the kingdom first. And that on the other side of every door of opportunity and delight every Lifer would have you open is the Devil’s slippery slope. For those who say Get a Life! want your life to be of the earth, and of the earth only. They want you to agree with them that “if it ain’t in the atom, it ain’t!” They call us not only to come bungee jump once with them, or just buy this latest style and then go back to your burlap sacks, but they are saying come live the bungee jump life, come hip-hop your life away. And that, for yourselves. It is the life style, the way of life that is the problem. It is the life very full just of people, places, and things, and which even delights in forbidden things, but a life without regard to Father, Son, and Holy Ghost. And this is a real temptation to us Christians still with our hulk of an old nature.

Fifth: Get a Life! is aimed. The Devil himself takes aim behind every “Get a Life!” Especially at Christians, and young Christians, does the Devil aim, with laser-precision, his temptations. “Get a Life!” sometimes openly, often subtly derides the Christian life. “Get a Life!” coaxes you when your parents have just shouted at you. “Get a Life!” comes and will come to you right at your weakness. Right when you and I are thinking this Christianity thing is boring, the Devil says, “Why here is just the life for you!” Right when we were thinking it was good enough to have been at church, and that I am safe (and free) because the friend I’m cruising with goes to my church, then come the thoughts of Pearl Harbor, and the self-justifications, and the hunches that “no one will know.”

“Get a life!” the Devil urges. OK, just get a little bit of Britney’s life. Try it. It won’t hurt. And grace is a very fine thing. You know something good will come of it, just as the Romans are telling you (and doesn’t Romans say something about that too?). God is so good. And underneath, when you fall tonight, as you are planning on doing, isn’t it true, there will be the everlasting arms?

“Get a Life!” Popular. Upstanding. Humanistic. Enlightening. Sensible. Fun. Gratifying. Come on: GET IT! GET THIS LIFE WE HAVE! says the unbelieving godless world.

Well, dear readers, we don’t need to. And we wouldn’t want to for the world. We have a life: the eternal life with God in Christ Jesus our Lord. But the temptation to “get” the life of the sin-dead world is real, and great. And many are those who fall for it, and in so doing make the world’s day, and the Devil laugh.

Next time: How to resist the call of the world to get its life. And how to live THE LIFE, the Christian life. Which means, oddly enough, how to get the life you already have in Christ.

Ready to be strange? 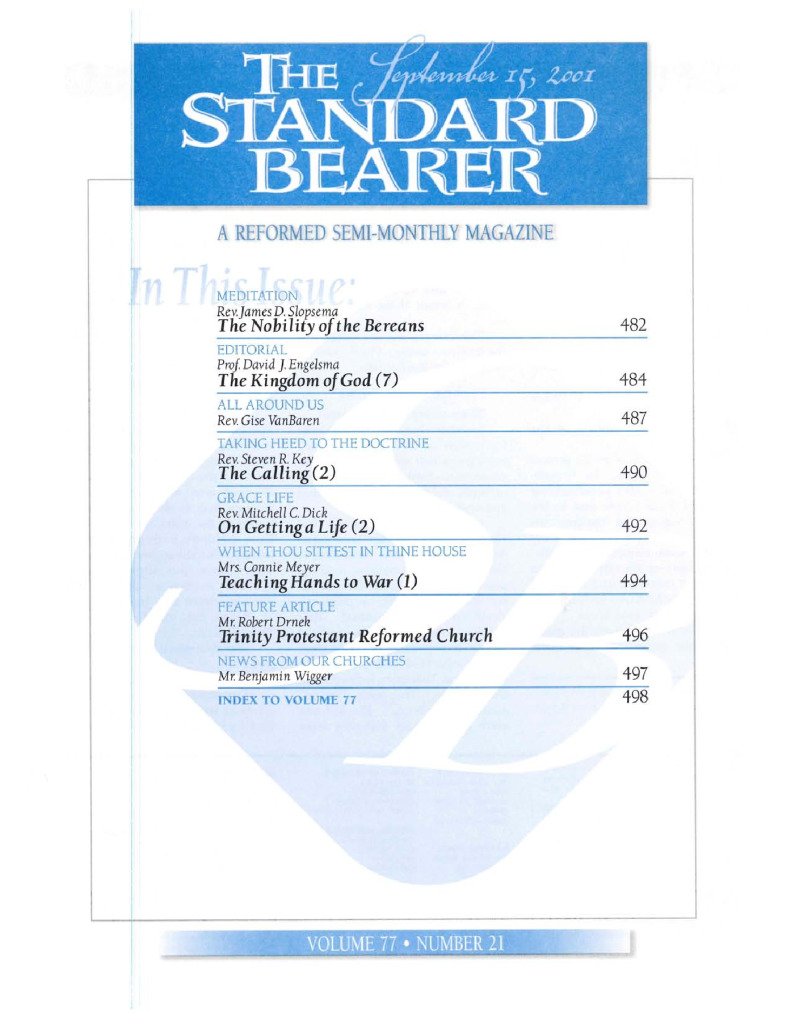