Of Singing and Playing

Of Singing and Playing

. On Sunday evening, November 2, 1980, our congregation in Hull held a dedication program for our new organ. For those who might be familiar with organs, the congregation has purchased an AOB (Associated Organ Builders) 523 organ. The program consisted of several special numbers on the organ, two numbers by our grade school choir, audience singing, and a demonstration of the organ. In addition, I gave the following address.

Luther, of course, was a great lover of music, himself being an accomplished musician, and even a composer of sorts. On one occasion Luther declared:

Next to the Word of God, only music deserves being exalted as the mistress and governess of human feelings . Through the medium of music the Holy Spirit placed His gifts in the hands of the Prophets; again through music the devil was driven away, as was the case with Saul, the king of Israel…. The Fathers and Prophets desired . . . that nothing be more intimately linked up with the Word of God than music. (Quoted in Patterns of Protestant Church Music, by Robert M. Stevenson.)

In his zeal for maintaining and developing good music in the church’s worship, Luther made music study a mandatory part of the curriculum in all the schools which he organized. Besides, he made an understanding of music a prerequisite to ordination into the ministry. And, finally, Luther himself contributed directly to the music of the church. Under his auspices several good hymn books were compiled and published for use in the worship services. He himself wrote some thirty-seven hymns, the best known and probably the most Luther-like being, “A Mighty Fortress is Our God.” This song, which has been sung in Protestant churches ever since the Reformation, is based upon Psalm 46. It is an enduring testimony to the strong and unconquerable faith of the Reformer.

Also Calvin gave his attention to the church’s worship of song. His high estimation of the benefit of singing by the church is seen in the following quotation from hisInstitutes.

And certainly if singing is tempered to a gravity befitting the presence of God and angels, it both gives dignity and grace to sacred actions, and has a very powerful tendency to stir up the mind to true zeal and ardour in prayer. (Vol. 2, p. 181.)

Calvin emphasized a threefold function of singing in the worship services. Singing was, above all, according to Calvin, a means to glorify and praise God. But, secondly, it was also a means of teaching and instruction for the people of God. And, singing served the purpose of comforting and encouraging God’s people. Because he was concerned that the church sing God-glorifying as well as edifying songs, Calvin made provision for the publication of a Psalter for use in the Reformed churches.

It is right here that the precise place of the organ in the worship service is delineated. The organ is to be the instrument by which the congregation is better enabled to carry out its calling. The organ is to aid the congregational singing. That implies a couple of things. That implies, first of all, that the organ and the beautiful sound of the organ are not ends in themselves. The end is the congregation singing songs of praise to her God. If the congregation ceases to sing those praises, ceases to sing them sincerely and from the heart, the organ is prevented from carrying out its proper function. If the congregation sings songs, beautiful though they may sound, which do not glorify God by ascribing all of our salvation to Him, then we abuse the good gift that God has given to us. Let us determine tonight to have our organ aid us in singing songs that glorify our Maker and our Redeemer. And then, too, let us determine to sing in such a way that the words which we sing are the expression of what lives in our hearts. And let us determine to sing God-centered and God-glorifying songs, such as are in the Psalters from which we sing. Then we dedicate the organ to God. Then by our use of the organ we worship God. We do well to take to heart the warning of Calvin:

We must, however, carefully beware, lest our ears be more intent upon the music than our minds on the spiritual meaning of the words. (Institues, vol. 2, p. 182.)

But there is a good and right, and therefore, too, important, function of the organ in our worship services. That function is assisting in our congregational singing, assisting in our worship of the God of our salvation. Let us heed the exhortation of the Apostle Paul in Col. 3:16,17: “Let the word of Christ dwell in you richly in all wisdom; teaching and admonishing one another in psalms and hymns and spiritual songs, singing with grace in your hearts to the Lord. And whatsoever ye do in word or deed, do all in the name of the Lord Jesus, giving thanks to God and the Father by Him.” To that purpose, the giving of thanks to God and the Father through Christ Jesus, do we dedicate the organ which God has given to us. 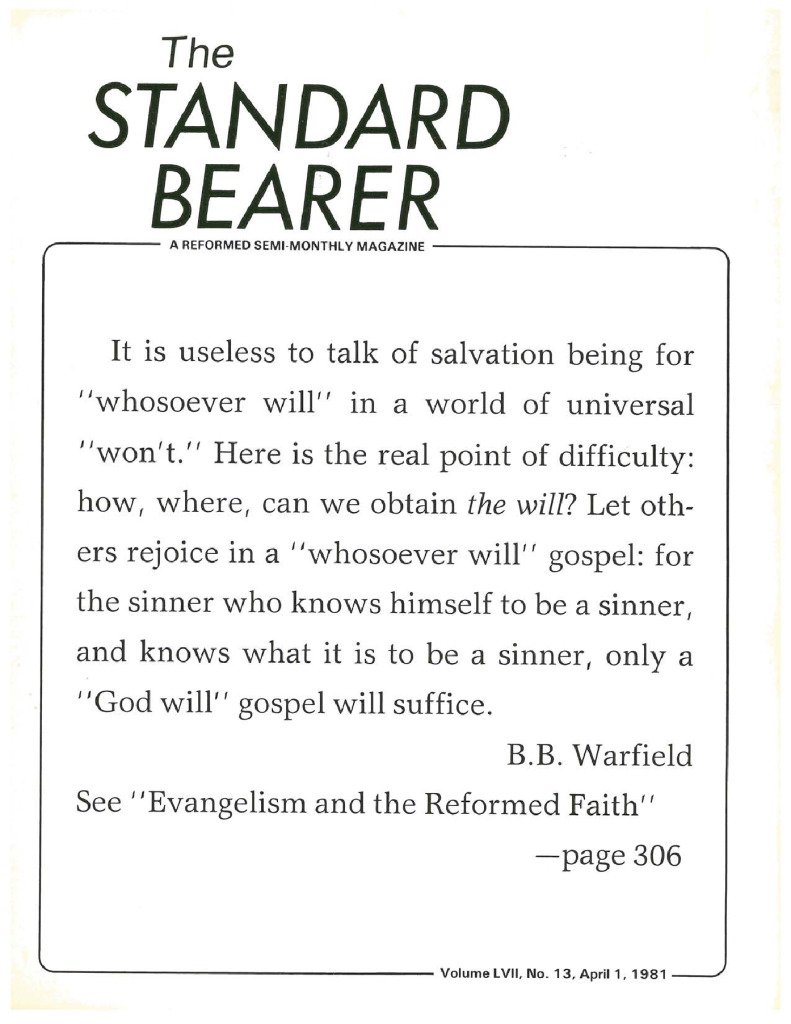