A while ago, a policeman fell into a murderer’s hand, and his body was found floating in a lake. This man left a widow behind. And at once among the “well-intentioned” and “charitable” the sense awakened that they should do something for the widow. So it was done. A brilliant festivity was organized. Admission was rated high. And after reduction of expenses, the proceeds were given to the widow.

A fine, delicate trait of the modern-times’ sense of charity. When by miscreants your husband is killed, ladies and gentlemen “amuse” themselves for a whole evening, and what comes of it is for you.

Of course, they who take religion more seriously took no part in this. Through the Young Men’s Christian Association they contributed a sum of money outright.

But for the rest, the whole city took part. Not to take part was considered cruel. It was on behalf of the poor widow of the murdered policeman.

Of this no more needs be said. From our side, warnings have always been sounded against those false forms of so-called well-doing. He who gives must give outright. All concomitant artificial means are unworthy of Christian love.

But what such an offensive occasion lays upon you is that, in your own circle upon giving, yea, upon giving from your own purse and by your own hand, you must let the light shine from Above.

Nothing so much as alms lends itself to show, self-misleading, and misleading of others.

And yet, especially with respect to “giving,” our Savior was so strict and inexorable.

What was not given for God’s sake had no count. When the right hand knew of it, the left hand was condemned. To give from one’s abundance was worthless. Only what was given from one’s indigence, from one’s living, shone in the treasure-chest of the Lord as fine gold of Ophir.

You remember the Jerusalem widow, on whose behalf no one made a benefit-feast, but who herself gave all she had in her house, two small farthings, money for which bread should have been bought, and which she spared her own mouth, to devote it to the Lord her God. Well, before and after this widow’s offering, gold and silver was cast by the handfuls into the treasury-chest. But this did not prevent Jesus from saying in the hearing of all: These two farthings of this woman are more than all this gold and silver. For what the others cast in was from their abundance; what this woman gave, she gave from her poverty (Luke 21:3).

“Giving” by way of exception, to make a great show, was indigenous with the heathen, and to a certain extent is this to this day. But giving as we see it in our Christian circles, and more strikingly still in English, Scotch, and American lands, is a fruit ofChristian faith.

We stand far behind England’s colossal gifts. But he who considers what especially not the well-to-do, but the people of small means among us give; give in church offerings; give to subscriptions; give to associations, for school and church; and then what is given at times privately, to help unfortunates, finds that it reaches a total that is truly astonishing.

One cannot estimate such sums. True giving escapes statistics, and is bound to do so. But so much can be said, that all money devoted in other circles to pleasure and travel and excursions is in these circles to the last cent brought to the altar of love. And that there are savings and privations, and garments worn somewhat threadbare, for the sake of the greater joy of making somewhat more liberal contributions, or of giving to something for which thus far no gift had been set apart.

There hides in this one of the vital powers of soul on the part of our lesser well-to-do people. It is a larger grace that is given them of God, the strengthening and ennobling of which reacts upon all their life and existence.

There is an art in giving, which you must learn of God or never know it.

There is first the ordinary, general giving to be rid of it. Laying up and accumulating so many thousands, and then also ten dollars or more for the needs of all Christendom together.

One drop from the abundance. And therefore without moral value, because there is no saving, no privation, no restriction of luxury back of it.

That was giving without art. Giving for the sake of doing our part with others. Well meant, but with no inner address from the heart behind it.

One gave nothing for his church. No penny for Christian schools. A small contribution to three or four associations. And then a bit of loose money for the coming and going man.

But by “need” God has modified this, and introduced art therein.

Ten times as much more is estimated too little to express the difference between what the ordinary man now contributes yearly, compared with what he used to give before.

He who took the trouble to count all the budgets, great and small, of all diaconates, churches, schools, and associations, etc., which in our country keep head above water, and thereby in his thoughts kept apart grosso modo what comes from the pockets of the humbler classes, would ask himself with astonishment, how from such people, counting so few rich among them, such colossal sums could have been raised.

Yet no one has less because of it. The general feeling has rather been heightened thereby than depressed. Of becoming poorer by giving there has been no mention.

And if in connection with money you refer to the wondrous mystery, which is implied in “the blessing of our God,” confess freely, that here the blessing is seen.

Something of the oil in the vessel from which continually went out and was not emptied.

Such giving as fruit of higher, holier art, was at the same time productive of indirect benefits.

Think of your church life.

It is almost universally recognized among the confessors of the Lord that conditions in Reformed and Lutheran churches subsidized on the part of the State are unbearable. Nothing was more desired than to make an end to them. But…this meant standing on feet of one’s own. Then the gold stream of the State freezes over and flows no more. Then everything must be paid by themselves. Who will be able to meet it? Who dares to face it?

That is the rock on which the churchly zeal of so many foundered.

But it was altogether different in those circles in which the holy art of giving had been learned. There was no need there to ask how the money was to come. There was known what the art of giving was capable of doing. And the happy outcome was that, through the art of giving, one regained his liberty in Christ, while the other brothers from lack of power to give remained in the clutches of their chains.

So it is with respect to social interests.

There is no equality on earth, but Love can do all things, and is the power in this world that smoothes many unevenness, and thereby dulls the sharpness of the same.

Here also this power of Love has shone out. Not the pride of the benefactor who dispenses charities from the heights, and thereby insults, but the love that gives for God’s sake, and thus on the part of God distributes to those of lesser and humbler estate.Of course, giving of princely gifts is something altogether different, belonging to an altogether different order of things, and in our country one knows merely from hearsay what is ordinary in America.

Gifts of a million dollars at once, or even of seven millions as a while ago was given by one man to the University of Chicago, we know nothing of. Only at times, such as recently, when we were taken by surprise by a large gift of many thousands. But for the rest the impulse of such large gifts, in life or at death, is not yet indigenous with us. Though we must not forget that fortunes among us do not begin to measure up to accumulations elsewhere. Also that no little human vanity and jealousy find expression in such gifts.

Yet we do not relinquish hope that, among us also, great capital shall come to the practice of this noble art. Of course, according to the measure of our power, but still as exhibition of higher enthusiasm. There are so many institutions that only in this way can be founded and maintained.

But whatever course this takes, it is certain that, after Jesus’ standard, the bottom of the money-chest of mercy is yet by no means seen.

Already now we give ten times more than fifty years ago, but in the fifty years to come this already large sum may well be doubled or tripled.

If he who is just a little above the humbler class could be persuaded to apply this system of giving, an incredibly large sum would thereby be rendered available.

Even then the point would not be reached at which finally Jesus would have us.

Jesus desires self-restriction in spending, so that giving may be enlarged. Jesus does not disapprove, but calls it praiseworthy, that the poorest take part in giving.

Take the two together, both that you come to the art of needing less for yourself, and of giving what you save thereby for God’s sake and for His cause, and that on every hand you widen the circle of givers, and guess yourself what this would imply.

The poor widow who gave her two mites out of her living has, age upon age, been the means in God’s hand of making rich the church of God in the world; and surely the sum cannot be estimated that the memory alone of this woman, by putting self to shame, has brought to the altar of Christian charity.

This woman gave her two farthings in the treasury, but by the mention of her on the Gospel-page millions and again millions to Christ’s church.

And this propaganda goes on not only among the more poor. Relatively the members of your household also are not rich in money, and your children, who live on you, have but a small sum of money weekly or annually at their disposal.

All these must learn to give, give from a need of their own soul, give of what is saved and of what they have denied themselves, that later on, when God shall have entrusted more to them, they will of themselves give more abundantly.

So the treasuries of Christ’s church are well-nigh numberless.

Provided she casts it upon her Lord, He, whose the gold and the silver is, shall neither forsake her nor put her to shame.

This is the mystery of self-sufficiency in the love of Christ. It always demands more, but is also always ready to make still greater demands upon itself.

It is with this as with the vapors that rise up to the heavens, presently in abundant rains to descend from thence again.

The need itself here brings provision. 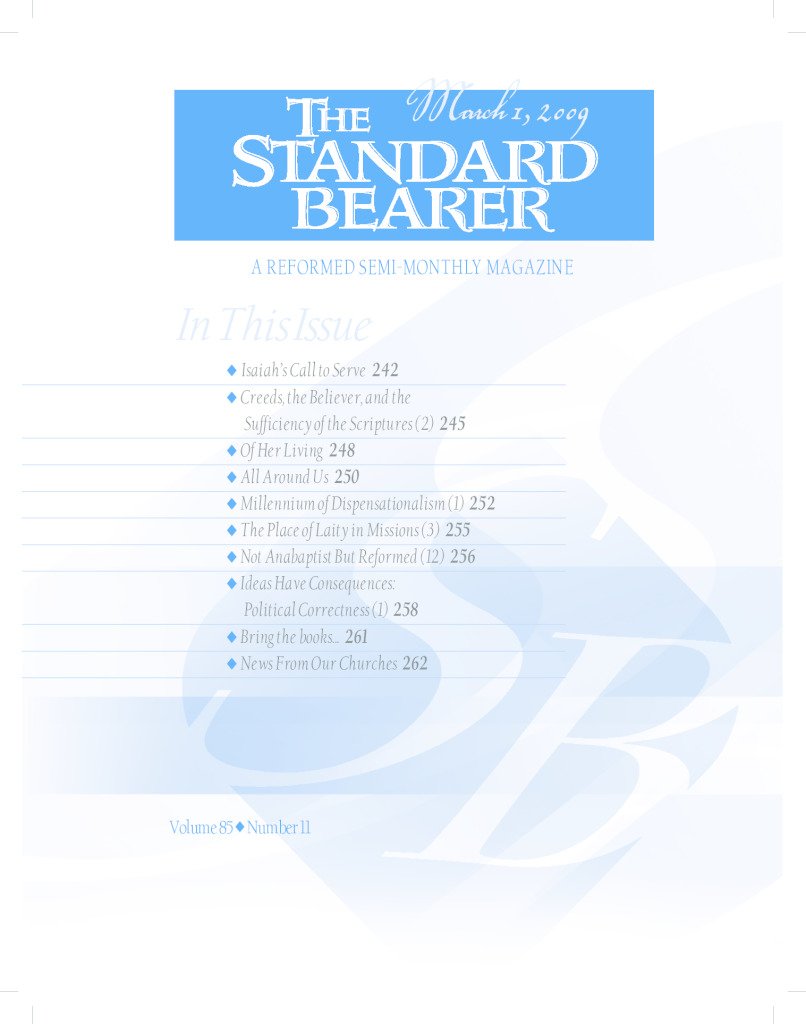