When we were students in our Theological Seminary, our professors would continually stress the importance of keeping in mind that the Bible is no Dogmatics. The Holy Scriptures indeed, thus it was stressed, were the only source of dogmatics, to be sure. But this did not constitute them a dogmatics pure and simple.

It is well to bear this fundamental truth concerning the Word of God in mind also in this study of “Old Testament Quotations in the New Testament.”

That Jesus ascended to heaven is to our advantage as believers. Of this advantage as well as of the high calling connected with it the apostle writes in this fourth chapter of his letter to the Ephesians. Of this we hope to see more presently.

The great profit of Christ’s ascension is not merely something for the church as a whole. It is a profit for each member in the Body of Christ. Each receives grace from Christ befitting his particular place and station in life and in the Church. None is overlooked. The individual saint has value before God, is precious in God’s sight both in life and in death.

Of this the apostle speaks in Ephesians 4:7 where we read “Now unto each one of us has been given grace according to the measure of the gift of Christ.”

This care that Christ exhibits for His people is therefore intensely personal. And, what is remarkable in this passage in Ephesians 4 is, that the apostle makes such a special point of the care that the ascended Lord has for each individual believer. And as remarkable as it is, so comforting it is also.

To prove this point of the care of the risen and glorified Lord for each member in that great multitude of the Saints, the apostle Paul quotes from Psalm 68:18. And, lest it be overlooked, this passage is the end of all contradiction on this score. Without doubt, when Paul makes this quotation from this well-known Psalm, the tacit implication is that this Psalm teaches that Christ does not only give gifts to His Church, but that this Psalm also teaches that each believer receives grace from Christ.

We repeat, according to Paul, Psalm 68:18 teaches that Christ cares for each individual believer; the Shepherd does not forget one of those whom the Father has given to Him, but He will bring them all to the fold and will go in and out before them, and feed them in green pastures!

That is the intensely practical truth which the apostle is here teaching.

And to verify this giving of gifts, which is an activity of the Crucified and Risen Lord, Paul appeals to Psalm 68:18. In effect he says to us, turn to your Bible and read Psalm 68:18 and there you will read: “When He ascended on high, he led captivity captive and gave gifts unto men.”

Don’t say too soon that this is perfectly evident? For if you do, you may later discover that you did not read Psalm 68:18 carefully.

But what is the difficulty? Is there a discrepancy here? If so, what is it?

Let us place 68:18 next to Ephesians 4:8. The respective passages here follow.

Psalm 68:18: “Thou hast ascended on high, thou hast led captivity captive; thou hast received gifts from men” (amongst men).

Paul quotes this in Ephesians 4:8 as follows:

“When he ascended up on high, he led captivity captive and gave gifts unto men”.

What do we notice, when we compare the exact wording of these two Scripture passages? It strikes our attention, that Paul, in quoting Psalm 68:18 in Ephesians 4:8 has made a change in the text. He has made a rather important and fear-reaching change. The drastic change is that instead of reading “received gifts” we now have “gave gifts”. And, we also notice that instead of the second person “Thou” in Psalm 68:18 we here have the third person “He”.

The question arises, when we consider this change of the wording, whether Paul changed the sense of the text, the sense of the Holy Spirit as meant in Psalm 68:18 when he quotes as he does in Ephesians 4:8? This question, as might be expected, has received a great deal of attention already in the Christian church. Men of every age, from the times of the early church fathers till this present day, have sought to give an answer to this question. Each one, who has answered the question, or, at least, attempted to give a solution to the problem proceeded from a definite critical or dogmatic bias. This, from the very nature of the case, could not be different. Paul is no longer in our midst. Him we cannot interrogate; we cannot ask the writer of the letter to the Ephesians just what prompted him to give this rendering to Psalm 68. Therefore, each and every one in attempting to answer the question of this change in quotations, must needs study the text in question. In doing so he will always proceed from a definite bias; in large measure the point of departure and procedure will determine the solution to this question.

We will, in this investigation, also proceed from definite presuppositions.

Implied in the former paragraph, namely, that we are here dealing with the Word of God’s revelation to Paul, is, that we do not purpose to seek to establish, whether Paul actually understood the sense of, the general instruction and intent of Psalm 68. We believe, that the great apostle of Christ to the Gentiles did give us the sense of the Spirit of Christ, as this permeates the typical-prophetical 68th Psalm. Pray, why should we doubt Paul’s understanding of this Old Testament Scripture, which he quotes? Who are we to set up ourselves as competent judges above this apostle. Rather than to assume such a critical and proud attitude in this matter, we should place ourselves humbly and eagerly at his feet.

Surely, that is our place.

If we possessed only this great epistle of Paul to the Ephesians, and had not other great letters from his hand, such would be the case. Does Paul himself not call our attention to this fact? Whose understanding of the Mystery of Christ measures up to his? Who has received grace as Paul did to understand the mystery of God’s will in Christ Jesus His Son? Thus we read in Ephesians 3:2-11: “If you have heard of the dispensation of the grace of God which is given me to you-ward; how that by revelation (according to the standard of uncovering the sense, the meaning, G.L.) He made known unto me the mystery; (as I wrote afore in few words, whereby, when ye read, ye may understand my knowledge of the mystery of Christ) which in other ages was not made known unto the sons of men, as it is now revealed unto His holy apostles and prophets by the Spirit, namely, that the Gentiles should be fellow heirs, and of the same body, and partakers of His promise in Christ by the Gospel: whereof I was made a minister, according to the gift of the grace of God given me by the effectual working of His power. Unto me who am less than the least of all, is this grace given, that I should preach among the Gentiles the unsearchable riches of Christ; and to make all to see what is the fellowship of this mystery, which from the beginning of the world hath been hid in God, who created all things by Jesus Christ: to the intend that now unto the principalities and powers in heavenly places might be made known by the church the manifold wisdom of God, according to the eternal purpose, which He purposed in Christ Jesus our Lord!”

Who, upon reading this most marvelous passage from the apostle’s pen, a passage that becomes the more marvelous the oftener one reflectively reads it, would still dare to assume a critical attitude toward Paul. Surely, it is a great privilege and responsibility to listen to what this preacher on the “riches of Christ”, the “manifold wisdom of God” has to proclaim. Do not the very angels, who ever behold the face of God, learn to see “the manifold wisdom of God” in the Church of Christ, winch wisdom Paul preaches— preaches even in this quotation from Psalm 68:18? We will, therefore, only attempt to learn from Paul that Psalm 68:18 speaks of the tender care of the Shepherd for each individual sheep of the fold; for thus is the sense of Paul here in Ephesians 4:8.

However, this does not mean that we do not have the right or the duty to attempt to give account of this change of quotation in the light of the Word of God. We must do more, to be sure, than merely say: “What Paul says is true; hence, there is no need of investigation and study.” On the contrary, we have a very real calling to attempt to understand this change.

In attempting to understand this quotation we will have to give account of two matters particularly. The first is, how in the light of Psalm 68 in its entirety and verse 18 in particular Paul could possibly change the term “take gifts” into “give gifts”. Is there anything in the Psalm that would suggest this rendering? The second matter that clamors for an answer is, whether due to the coming of the Son of God in the flesh, suffering and dying on the cross, and being raised to God’s right hand, Paul did not by the Spirit of the Risen Lord see explicitly in this Psalm what was very really implicitly present.

We believe that an affirmative answer to both of these propositions wall not only give us the answer to this knotty question of quotation here, but it will also aid us in grasping with all the saints what is the length and breadth, the height and depth of the love of God in Christ Jesus that surpasses all knowledge.

This is a matter of great importance. This matter thus becomes for us more than a matter of academic study. It will be a matter of the heavenly Father’s wondrous love manifested in His Son to us.

We will consider, D.V., these two propositions in the next issue. 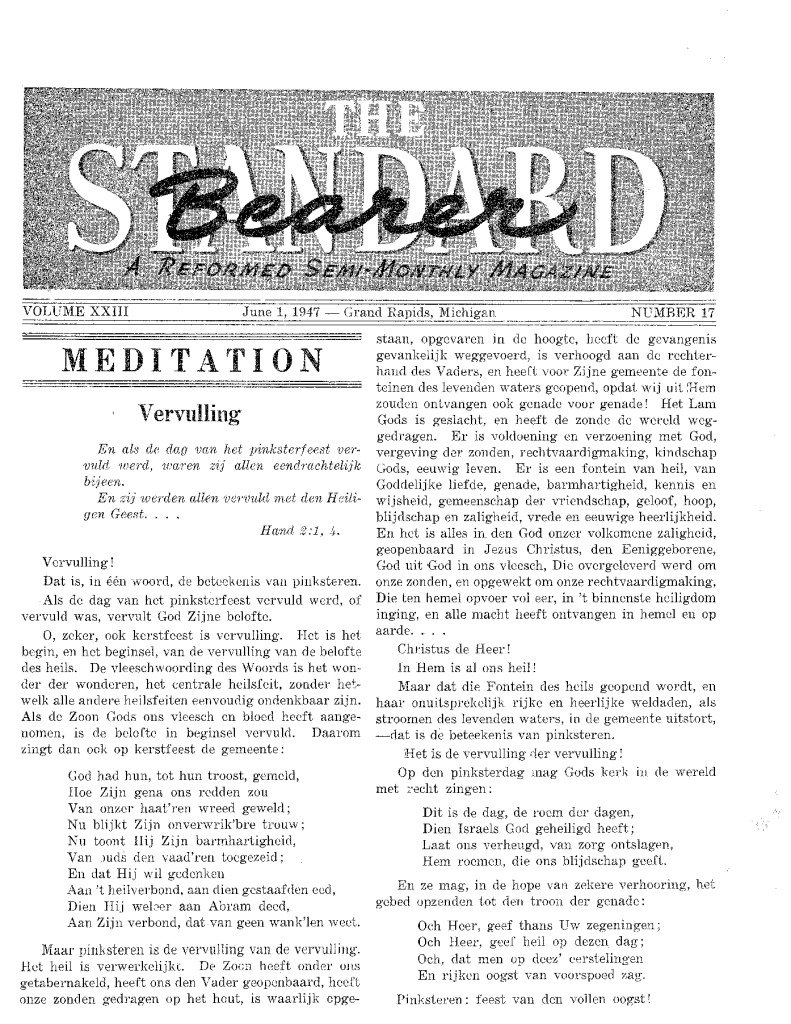