Not yet ascended to my Father

Not yet ascended to my Father

Jesus saith unto her, Touch me not; for I am not yet ascended to my Father: but go to my brethren, and say unto them, I ascend unto my Father, and your Father; and to my God, and your God. John 20:17

These words were spoken by Jesus to Mary Magdalene at the tomb on the day of His resurrection.

Mary Magdalene had come to the tomb earlier that morning with several other women to anoint Jesus’ body. To their complete surprise the stone had been rolled away from the opening of the tomb. While the other women entered the tomb and were informed by the angel of Jesus’ resurrection, Mary, without any investigation, ran back to Jerusalem to tell Peter and John that someone had stolen the body of Jesus.

And now Mary was at the tomb alone. The other women were returning to Jerusalem with the glad news of Jesus’ resurrection. Peter and John had visited the grave site, had seen the evidence of the resurrection, and had left. But Mary was still in the dark. She was at the tomb sobbing uncontrollably.

And Jesus appeared to her! At first Mary thought He was the gardener and asked whether He knew where the grave robbers had taken Jesus’ body. But when Jesus spoke her name, she recognized Him and reached out to embrace Him. What joy and relief filled her heart!

But then Jesus stopped her. Touch me not!

How strange this must have seemed to Mary. Ever since Jesus had cast out seven devils from her, Mary Magdalene had been a faithful disciple of Jesus. In fact, she with several other women had ministered to Jesus out of their own substance (Luke 8:1-3). How often had not that brought her into close contact with Jesus? And now she was not to touch Him? Besides, did not Jesus understand her great joy? Did not Jesus realize how His crucifixion three days ago had devastated His disciples? Did He not appreciate their grief and sorrow? And now He was here, alive and well. She did not understand it all. But could not Jesus appreciate her ecstatic joy as she reached out to embrace Him?

The explanation for this command is to be found in the nature of Jesus’ resurrection.

His resurrection was an advancement from the earthly to the heavenly.

This had not been the case of any other resurrection prior to this. Take Lazarus’ resurrection as an example. One month prior to His own resurrection, Jesus had raised Lazarus from the dead. Lazarus’ resurrection was merely a return back to this life. Although raised from the dead, Lazarus’ body remained flesh and blood. It was still an earthly body adapted only to live here on the earth. And Lazarus’ body was still mortal. The poor man had to die again. And right along with all this, Lazarus was able to resume his earthly life with all the relationships he had enjoyed before.

The explanation for this greater resurrection of Jesus into heavenly glory is to be found in Jesus’ perfect sacrifice on the cross. Burdened with the sins of His people, Jesus endured the full punishment of sin. This earned for Jesus the right to eternal life with God. It demanded this better resurrection.

But this destroyed the old way of life that Jesus had with His disciples on the earth. He was now heavenly. They were still earthly. It was impossible for things to continue as they had been.

And this is what Jesus was teaching Mary Magdalene with that surprising rebuke, “Touch me not.”

Especially Mary had to be taught this. Not understanding the purpose of His death and resurrection, all of Jesus’ disciples would have rejoiced to return to how things had been. Gladly they would have followed Jesus, sitting as His feet for instruction, rejoicing in His miracles, tending to His earthly needs. And this was true especially of Mary Magdalene. She alone reached out to embrace Jesus as He appeared to His various disciples.

Touch me not! Things will not continue as they have been.

Touch me not; for I am not yet ascended to my Father!

Jesus ascended to heaven forty days after His resurrection. This was a change of place for Jesus. He left the sphere of this earth in His glorified human nature and went to heaven. As to His human nature, He is no more here but in glory.

Jesus emphasized that He would ascend to His Father, whom He also identified as His God. “I ascend unto my Father, and your Father; and to my God, and your God.” Throughout His earthly ministry, Jesus repeatedly spoke of God as His Father. In so doing He was not referring to the inner trinitarian relationship that He has eternally as the second person of the Trinity to the first person. It is true that within the Godhead Jesus is the eternal Son of the first person, who is His Father. But the first person is not the God of the second person. And so we must understand that when Jesus spoke of His God and Father, He had in mind rather His relationship as Mediator of the triune God. Through the virgin birth the eternal Son of God came into our flesh to be the Mediator of God to accomplish the salvation of His elect people. That made the triune God to be the God and Father of Jesus, the Mediator. And to that relationship Jesus now spoke when He told Mary Magdalene, “I ascend unto my Father.”

It is important at this point to understand also that as the Son of God in our flesh Jesus, the Mediator, is the heir of God, destined to inherit all things from His heavenly Father. According to Hebrews 1:2 God, “hath in these last days spoken unto us by his Son, whom he hath appointed heir of all things, by whom also he made the worlds.” Notice, Jesus is the appointed heir of all things! He is heir of the entire universe. He is heir of the power of His heavenly Father to rule all things, including the hearts and lives of God’s elect. He is heir of all the blessings of salvation that God has ordained for His elect church.

This inheritance is something Jesus earned by His suffering and death on the cross as He covered the sin of God’s elect church.

And it is through His resurrection and subsequent ascension that Jesus comes into His inheritance as God’s Son. He is seated at the right hand of God the Father. He is clothed with power and honor and glory to own and rule all things. He is also given the blessings of salvation that He has earned for the church.

And the blessed gospel is that Jesus receives His inheritance as our Brother.

Notice how Jesus emphasized to Mary Magdalene this relationship with His disciples: “But go to my brethren, and say unto them, I ascend to my Father and your Father, and to my God, and your God.” On the basis of Jesus’ perfect sacrifice on the cross and in the power of His resurrection, Jesus’ disciples are brought into the very family of God. They are adopted as God’s children. They are even given the image of God through a spiritual rebirth. And so they become Jesus’ brothers. Bear in mind that Jesus’ disciples are not just the small band that followed Him during His earthly ministry. His disciples include all in history who follow Him by faith. All true believers are members of the family of God and know Jesus as their Brother.

And Jesus is not just any brother in the family of God. He is the firstborn. Romans 8:29 teaches that whom God “did foreknow, he also did predestinate to be conformed to the image of his Son, that he might be the firstborn among many brethren.” As the firstborn or eldest Brother in the family of God, Jesus ascended into heaven to receive the inheritance of God. But as the firstborn, Jesus also shares His inheritance with us, His brothers and sisters. Of this inheritance we have a small foretaste now through the working of the Holy Spirit whom Jesus poured out on Pentecost. We will receive our full share when Jesus, our elder Brother, returns for us at the end of the ages.

This is our salvation!

To the ascended Jesus who is now our elder Brother we must cling.

Jesus told Mary not to touch Him because He was not yet ascended to His Father. That did not mean that she could never cling to Him again. It meant that she must wait until He was ascended and come into His inheritance as the Son of God. She must wait until as her elder Brother He would begin to share His inheritance with the family of God through the pouring out of the Holy Spirit on Pentecost. And she must cling to Him, not physically but by faith.

And Jesus had a message for Mary to relay to the disciples, “But go to my brethren, and say unto them, I ascend unto my Father, and your Father; and to my God, and your God.” What is touching is that Jesus also called the other disciples His brothers, so that His God and Father is also theirs. This was even after they had abandoned Him the night that He was arrested. He still owns them as brothers. He can do so because He covered their sins on the cross and earned for them a share of His inheritance. They also must learn with Mary to cling to Him as the risen, ascended Lord who had become their elder Brother.

To this same Jesus we also must cling.

Sometimes we also might long for Jesus to be here with us in the flesh as He was centuries ago. How wonderful to sit at His feet to learn as His disciples once did! Oh, to see His miracles performed again!

But through His ascension we have so much more. Jesus has come into His inheritance as the firstborn. As our elder Brother, He has begun to share this inheritance with us through the Spirit of Pentecost. One day He will return to give us our full share.

To that Jesus we must cling! 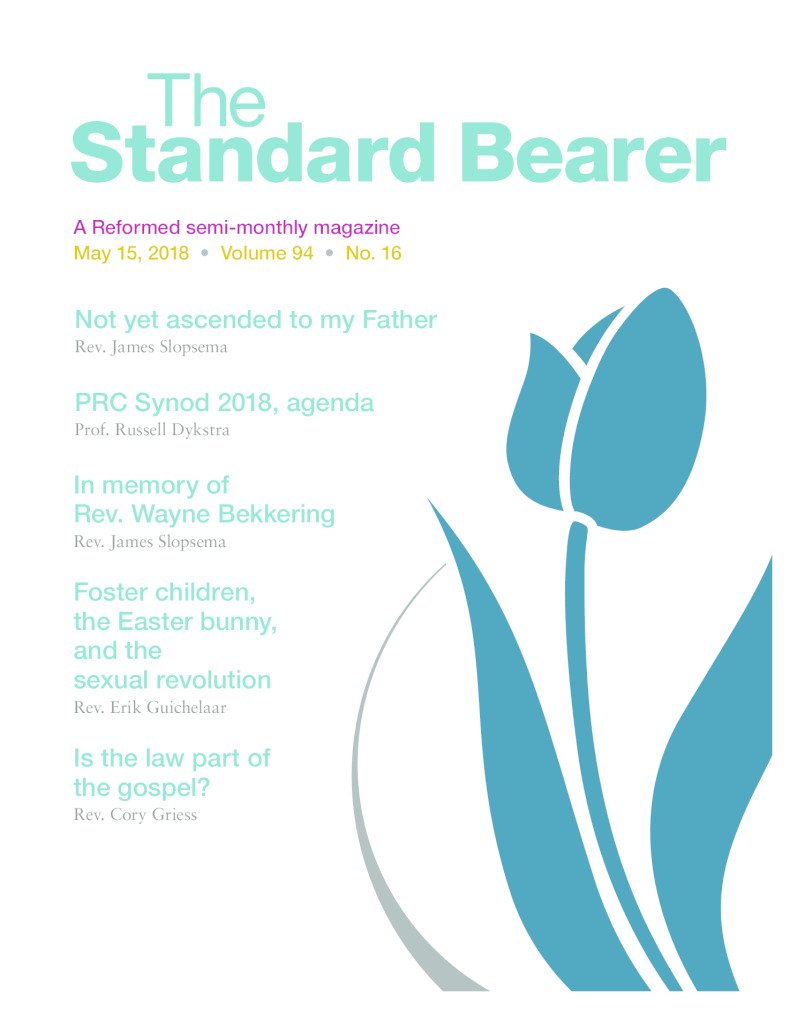