Not Anabaptist but Reformed*: Chapter 3. Calvin and Kuyper On Common Grace (2)

Not Anabaptist but Reformed*: Chapter 3. Calvin and Kuyper On Common Grace (2)

In Institutes II.3.3, Calvin once again returns to this same subject. Here also it must be pointed out that he does not speak of these gifts as one of his most important doctrines. Just the opposite is true. This chapter deals with the fact that natural man can never produce anything other than what is damnable before God. But after Calvin has developed this very sharply and powerfully, he foresees a potential objection. And he goes into that objection. Some of the heathen have indeed been adorned with excellent gifts. And therefore the opinion is untenable that man’s nature is entirely corrupted. Well, then, to that Calvin gives the reply “that amidst this corruption of nature there is some room for Divine grace, not to purify it, but internally to restrain its operations.”

If one wants to know what Calvin understands by this grace amidst the corruption of human nature, and how he conceives the fact that God restrains sin, then one must continue reading to the end of this paragraph. There Calvin writes, “Hence some by shame, and some by fear of the laws, are prevented from running into many kinds of pollutions, though they cannot in any great degree dissemble their impurity; others, because they think that a virtuous course of life is advantageous, entertain some languid desires after it; others go further, and display more than common excellence, that by their majesty they may confine the vulgar to their duty. Thus God by His providence restrains the perverseness of our nature from breaking out into external acts, but does not purify it within.”

This too is clearly sufficient. Calvin does not speak of a grace that works in the heart of natural man by which in one way or another he feels impelled to do and will the good, but of other influences, like shame before others, fear before the law, selfishness, etc., which can serve as a deterrent to sinful deeds. His mind always remains just as wicked and sinful, but he does not always break out into the act. Take notice that this is also completely different from the newer view that the process of sin is checked in history. Calvin never makes natural man even a little bit better by a working of common grace.

Calvin also feels that there remains yet an objection. How, by a restraining of sin in man, by a bridling whereby the sinful man does not break out into the act of sin, shall the good yet be performed by that man? Even if the act of sin is held back in him out of fear or shame, he is still not performing the good. Yet it seems to be true that some heathens have led virtuous lives. Thus we have the example of Camillus. To that, then, Calvin replies in the first place that this is no more than appearance. Even under the greatest appearance of purity, he says, human nature is impelled unto corruption because the mind of man is and remains wicked. Whatever appearance of virtue he may practice, he does this with a wicked mind. But apart from that, Calvin explains cases like Camillus in this way: “that those virtues are not the common properties of nature, but the peculiar graces of God, which He dispenses in great variety, and in a certain degree to men that are otherwise profane.”¹

Take notice that graces (plural) here simply has the meaning of gifts; and that these also are not common but peculiar. And then Calvin adds this: “But because every one who has risen to great eminence has been impelled by his ambition, which defiles all virtues and deprives them of all excellence in the Divine view, whatever may be apparently laudable in ungodly men ought not to be esteemed at all meritorious.”²

So much for Calvin. We think all this can be briefly summarized as follows:

a) He does not deal with any doctrine of common grace. And what he does write in this respect is not treated as a prominent part of his instruction, but in reply to objections which men would bring against his exposition of the total depravity of man.

b) He views what has remained in man after the fall as gifts of God, and he calls those gifts graces for which man owes gratitude to God.

c) The fact that natural man does not always break out into the act of sin Calvin attributes to a certain restraining of sin through shame, fear, selfishness, and so forth.³

d) He always very emphatically maintains that natural man, with all those gifts, can never will or do good, but that all those gifts are impure to him because he himself is impure.

Now compare this with the newer view of common grace. Kuyper in De Gemeene Gratie:

And finally in the fourth place, it follows from

that this common grace not only left a notion in the fallen sinner of what is honorable and dishonorable, just and unjust, good and evil; it not only holds him in place and allows him to work, but this common grace still also grants the sinner the power to do good. He (Paul) indeed says that, “When the Gentiles, which have not the law (of Sinai), do by nature the things contained in the law….” They, therefore, not only know them, but they do them as well, and exactly from that fact that they do them Paul draws the conclusion that they have knowledge thereof. That doing is therefore even a point of departure for the apologetic argument. Now if it is maintained that even a child of God professes “to be incapable of thinking, and much less of doing, any good of himself,” then it follows from this that the heathen do not do this good of themselves either, nor of their own strength, but only through the fact that common grace drives and enables them to do it.”4

Now, first of all, we want to remark that already in the explanation of this text fromRomans 2 Dr. Kuyper deviates fundamentally from Calvin. To be sure, Calvin also gives an explanation of the same text in his Institutes II.2.22. There he writes,

And no sentiment is more commonly admitted, than that man is sufficiently instructed in a right rule of life by that natural law of which the Apostle there speaks. But let us examine for what purpose this knowledge of the law was given to men; and then it will appear how far it can conduct them towards the mark of reason and truth.

Calvin then demonstrates that this law can only serve to take away from natural man every cloak of innocence. Calvin argues that the Apostle does not mean that the heathen actually obey the law, but that they formally walk according to a law, and thus sin against a law that is written in their hearts.

Moreover, let us pay attention to the notion which is expressed here by Dr. Kuyper:

a) He speaks of good here in the sense of practicing God’s law, or even in the sense in which the Heidelberg Catechism speaks about it, when he says that we are by nature incapable of any good.

b) Now no man does this good by nature. We are by nature so depraved that we are incapable of any good.

c) The child of God does this good in principle by the power of regeneration. Not of himself, but out of the life of regeneration he is once again capable of doing good.

d) But the heathen man does this (even in the same measure) by the power of common grace which works in him.

Now you might hold it against us if we attack a great man like Kuyper, but the fact remains, as we contend, that Dr. Kuyper has herewith fundamentally strayed from the path of Calvin, who always maintained that natural man can never will or do good with his remaining gifts. And Kuyper has also strayed away from the clear pronouncements of our confessions. The proposition indeed can be briefly restated by the following words: “Natural man is incapable of any good unless common grace grants him the power to do this good.” We deny that anyone who professes this proposition is Reformed.

Now we are completely aware of the fact that Dr. Kuyper himself attempts to justify this notion in every possible way and to explain it in harmony with our confessions, which always maintain that man is by nature wholly incapable of doing any good. It is also a fact that this endeavor was never successful. He first declares it to be true that good exists in unregenerate man only on the outside. God causes him to do good by His common grace without man wanting or intending it himself. This is a strange notion indeed! (See De Gemeene Gratie II, pp. 300-301.) But later he himself feels that this notion cannot give any satisfaction either. After all, whatever man does he does consciously and willingly. Otherwise in the doctrine of common grace you get a sort of determinism by which God forces the sinner against his will to do some good which he does not mean to do. And therefore, Dr. Kuyper later declares it to be also true that common grace indeed improves natural man to some extent, even in his understanding, will, and inclinations, so that in reality he also wants to do that good which he performs. The core of the ego (whatever this might mean) stays out of it, but “the unconverted man in his inclinations, in his consciousness, and in his will can be influenced by common grace.”¹

So then you get an operation of God’s grace by which natural man is turned to the good in his understanding and will, and in his inclinations, by which he can think and will that good, and which finally differs from saving grace only in this, that it does not penetrate to the ego. There fore, by common grace the nature is indeed improved (understanding, will, and inclinations certainly belong to the nature of man), but the ego stays out of it.² Now, however great Dr. Kuyper may be, we cannot reconcile this with Scripture and the confessions. Not even Dr. Kuyper is successful in this. And we profess with all boldness before God and the church that we must fundamentally differ with this view. Outside of the regenerate, there is not such an operation of God’s grace in natural man.

But the main goal of this exposition on our part was only to demonstrate that this doctrine of Dr. Kuyper is found nowhere in Calvin, and that, therefore, our claim also stands that it is audacious to say that the doctrine of common grace is one of the most prominent doctrines that Calvin distinguished. Moreover, we can also take our leave of Rev. Van Baalen’s chapter on this. He mainly points out that we differ with Dr. Kuyper and Dr. Bavinck on this point. We had written that ourselves for a long time already. In this chapter we have once again and emphatically asserted it.

³ What Calvin means is not an internal improvement by a working of God’s grace which yet enables natural man to do good within his consciousness and will and inclinations. But he simply has his eye on the difference between the external act and the heart. The heart always is and remains just as wicked. It is even very possible that by sin not breaking out into the external act, it becomes even greater before God. (Editor’s note: This f.n. is part of the pamphlet by Danhof and Hoeksema.) 4 Kuyper, Gemeene Gratie, II, p. 17. 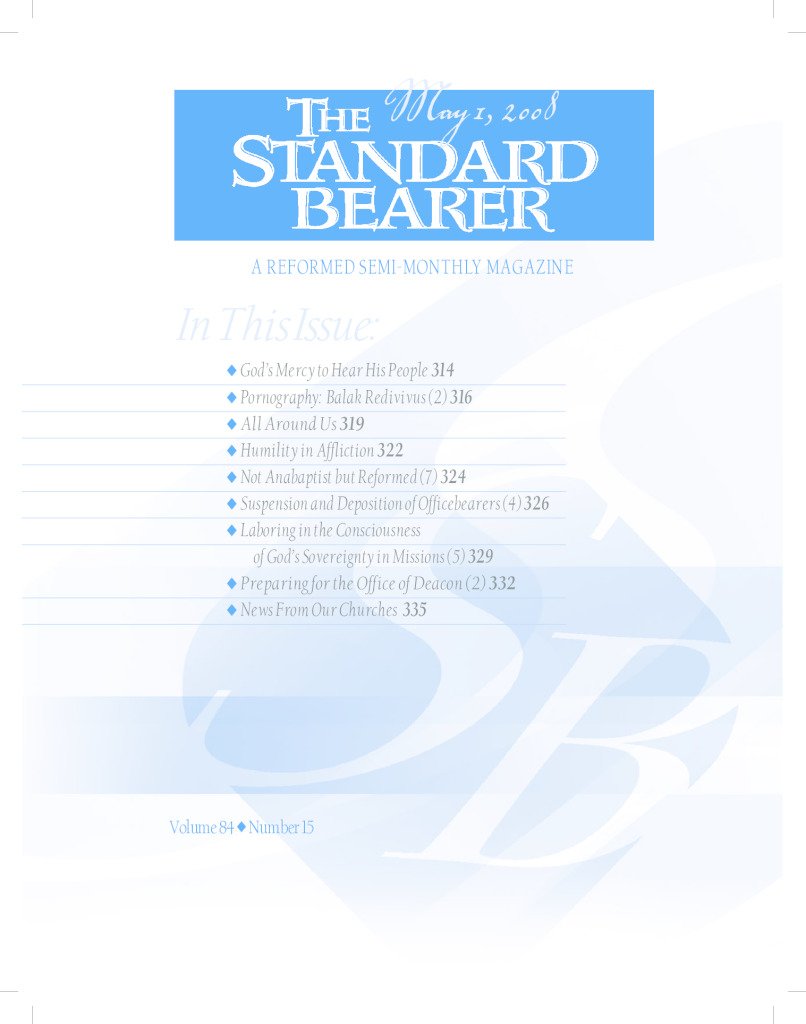