Not Anabaptist but Reformed (9)*: Chapter 4. The Confessions and Common Grace (2)

Not Anabaptist but Reformed (9)*: Chapter 4. The Confessions and Common Grace (2)

* Not Anabaptist but Reformed was a pamphlet written by Danhof and Hoeksema in 1923 as a “Provisional Response to Rev. Jan Karel Van Baalen Concerning the Denial of Common Grace.” Translated here from the Dutch by seminarian Daniel Holstege. Previous article in this series: July 2008, p. 427.

Well then, my explanation of this fact is that the fathers avoided the term on purpose. The term had a bad aura for them. They did not want it. Therefore they speak of natural light and of the gifts that have remained, but they intentionally speak nowhere of common grace. This explanation leaves nothing to be desired for clarity, don’t you agree? It is a completely different way of reasoning than that which you attributed to us, brother!

But this still has to do only with the term “common grace” (algemeene genade), and we do not like to quarrel over words. After all, Dr. Kuyper criticizes the term as such and therefore he prefers to use the word gratie.¹ If it had to do only with a term, then you can be sure we would not have been so insistent that, with our view of common grace as it has been further developed in recent times and powerfully promoted among us, we have taken such a dangerous path. It has to do with principles, not terms.

Rev. Van Baalen, you have exhausted yourself to show that our confessions do speak clearly about this doctrine. But it is in vain, brother. Of all these main topics of the doctrine of common grace, which we have summarized above, our confessions do not speak at all. And in some places they are decidedly opposed. In the strongest possible terms the confessions contradict the claim that natural man can still do good out of the power of common grace. And if it comes to the question of natural light, our confessions teach that thereby natural man performs some civic justice and reveals some regard for virtue, but that he renders this light wholly polluted even in natural things and holds it under in unrighteousness.

Rev. Van Baalen, you claim that a confession is almost always born out of conflict and that the conflict in those days had little to do with this point, and that, therefore, common grace is not mentioned as we might wish it to be. But we ask once again, if that claim is true, why then does the term appear only in the rejection of errors and never, where you would certainly expect it, in the positive development of the doctrine?

My answer you know. All by itself this reality stands diametrically opposed to your claim. And besides, why is not any trace of this “important doctrine” to be discovered in our Heidelberger? Why not in our Confession of Faith? Why, Rev. Van Baalen, must you resort to claims that you simply snatch out of the sky, as for example, that we deny the doctrine of Providence as it is developed in Lord’s Day 10? You simply say that, but you do not prove it. You do not demonstrate at all how this should necessarily follow from our view.

This has never been expressed by us. Why is this term, which is supposed to be a fundamental doctrine of our faith, a Boaz of God’s temple (sic! VanAndel)², used only when placed on the lips of the Remonstrants? And why does this remarkable phenomenon occur that you, and others who think they must do battle with us, raise the exact accusation that we push the doctrine of election too strongly? Why is it that you quote the text “God wills that all men be saved” in such an Arminian fashion?

You see, brother, all of this is characteristic. Our fathers avoided that term because it had the flavor of the Remonstrants. And you fight so strongly against the denial of common grace with a pamphlet that also here and there exhibits a tone that makes us fear the worst.

This may also serve as the answer to the “excellent words” which you quote from Rev. J. Groen out of Onze Toekomst. You find basically the same reasoning for common grace that Rev. J. Groen wrote at that time in Onze Toekomst in the pamphlet that B.K. Kuiper published in connection with the Janssen case. Both want to maintain and defend through common grace the “neutrality-viewpoint” of Dr. Janssen. It will not be unknown to you, brother, that Rev. G. Doekes, well known in the Netherlands, has condemned this use of common grace in the Dutch Wachter as definitely un-Reformed. There he condemned the pamphlet of B. K. Kuiper and made known in terms even less mild that no good, concerning form or content, could be found in that booklet. Perhaps without even knowing it, he condemned at the same time also the writing of Rev. J. Groen in Onze Toekomst.

Moreover, let the following suffice for this point:

a) That we have never ever denied natural light as it is interpreted by our confessions. We do deny that many in our day, including and especially Dr. Janssen, follow and maintain this point of our confessions.

b) Under the positive development of this natural light, what Rev. Groen is pleased to quote (see page 66 of Rev. Van Baalen’s pamphlet) is not all that is said. The Canons include the fact that natural man is not even capable of using this light aright in natural things, but holds it in unrighteousness and in various ways renders it polluted.

c) Without any reservation we fully endorse Articles 13 and14 of the Belgic Confession and Lord’s Day 10. If Rev. J. Groen claims that this is inconceivable without believing in common grace, and you quote this with such approval, then the burden of proof is still on you, is it not?

d) We have never ever denied that God is an overflowing fountain of all good gifts.

Finally, let it be said that this entire chapter makes a poor impression on us. All kinds of things are dragged in which have absolutely no connection to this doctrine. In exactly this way the brother has left the impression that it is pretty well impossible to demonstrate that the doctrine of common grace was ever included in our confessions. Truly, this chapter is a complete failure!

1 The Dutch word means “grace” and is a synonym of genade. Ed.

2 In a work entitled “The Foe Within the Gates,” Professor H.J. VanAndel of Calvin College identified the two pillars of the temple of God’s truth as the doctrines of particular grace (Jachin) and common grace (Boaz). (See I Kings 7:21.) Herman Hoeksema preferred to identify these two pillars of God’s truth as the doctrines of God’s sovereign grace and God’s covenant (cf. Believers and their Seed, RFPA, 1971, p. 9). 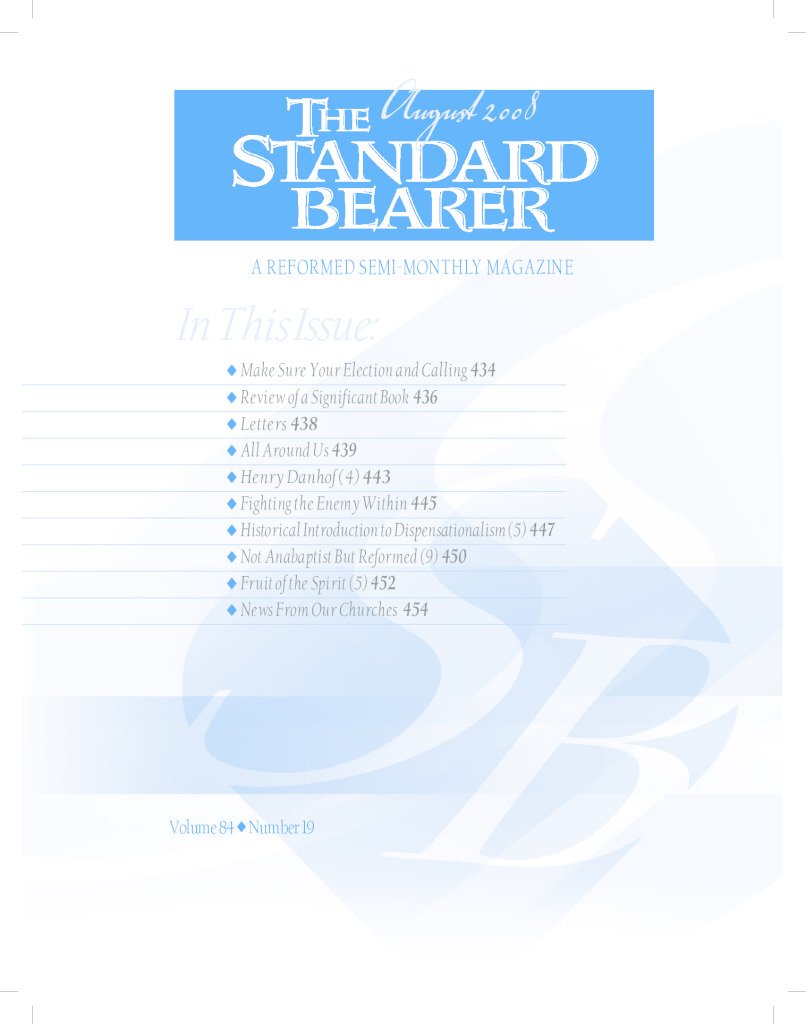