Not Anabaptist But Reformed (8)* Chapter 4. The Confessions and Common Grace (1)

Not Anabaptist But Reformed (8)* Chapter 4. The Confessions and Common Grace (1)

* Not Anabaptist but Reformed was a pamphlet written by Danhof and Hoeksema in 1923 as a “Provisional Response to Rev. Jan Karel Van Baalen Concerning the Denial of Commin Grace.” Translated here from the Dutch by seminarian Daniel Holstege. Previous article in this series: May 1, 2008, p. 324.

Next Rev. Van Baalen devotes a chapter to the confessional side of the matter. We will respond accordingly.

If the attempt made by the brother here should fail, then certainly his entire booklet will be a failure. And in fact both this chapter and the entire pamphlet are a failure, indeed a total failure. We cannot imagine that our church papers have recommended this work to our people just as it is, without any criticism. Especially we do not understand the high praises from Dr. H. Beets in The Banner and from K. W. Fortuin in De Wachter. The brothers have nothing but praise. Language and form and content are all considered praiseworthy. And Rev. Karel Fortuin even thinks that the matter is clear enough now to take action. We do not understand this.

But let us take a look.

But Rev. Van Baalen gets back on track. And then on pages 64 and 65 he attributes to us a reprehensible argumentation greatly resented by us because it leaves the impression that we are dishonest. According to him, we indeed recognize that our confessions teach common grace, but we rationalize it away as follows: The confessions name a certain doctrine only one time. But another doctrine, which Rev. Hoeksema cannot bring into agreement therewith, is expounded in the confessions much more at length. He claims that our remedy to this is simply to eliminate what does not please us and preserve what seems good to us. And, seeing that the latter has indeed been expounded much more at length, we still have the greatest part of the confessions on our side. Thus, says Van Baalen, we calmly proceed, all the while claiming that we are in agreement with the confessions.

Then Rev. Van Baalen adds that this comes from men who were so convinced that Rev. Bultema had to be deposed because he taught something not stated anywhere in the confessions! Now in this last point the brother once again shows his own ignorance with respect to our confessions and the Bultema affair. He is obviously not very well informed on this matter, or else he is totally ignorant of Bultema’s positions which were condemned by Synod. The kingship of Christ over His church—is it not stated in the confessions, brother Van Baalen? The unity of the Old and New Testament church—is it not stated in the confessions, brother? You might do well to investigate this matter first, before you bring such a notion any further into the church.

But concerning the argument that you want to attribute to us, we definitely take it evil of you. To argue like that would definitely be low and dishonest. You know as well as we do that we never have. The whole argument is a figment of your own imagination. That you think that we would argue like that reveals more about yourself than about us. Such arguments do not arise in our brain, brother. You are once again quite wrong.

The confession puts the point we are dealing with like this:

“The true doctrine having been explained, the Synod rejects the errors of those…

“Who teach that the corrupt and natural man can so well use the common grace (by which they understand the light of nature), or the gifts still left him after the fall, that he can gradually gain by their good use a greater, namely, the evangelical or saving grace and salvation itself” (Canons, III/IV, Rejection of Errors, Art. 5).

And what now was our argument?

This, that the fathers who drew up the Canons placed the term “common grace” on the lips of the Remonstrants. The Remonstrants spoke of nothing other than “common grace.” The fathers, however, did not want to make themselves accountable for this term. They preferred to speak of the light of nature, as they actually do in Canons III/ IV, Article 4; or of the gifts which were still left to fallen man, as in Belgic Confession, Article 14, and here. So that in my view the meaning and sense is that this is “the common grace by which they understand the same thing as we do when we speak of the light of nature.” It was the Remonstrants who preferred to speak of common grace; the fathers rather avoided that term.

You will surely agree that this argument is entirely different from that which you ascribed to us, will you not?

And, as a brother, will you not also want to express publicly that you have wrongly ascribed to us this foolish argument and that this truly grieves you?

But we now take it a step farther. The explanation of the meaning which we gave above, and which can in itself also be interpreted differently, is confirmed by the fact that our confessions speak nowhere of common grace, not even where one would expect to see it.¹ How do you explain this fact, brother Van Baalen? We explain it this way: that they have intentionally avoided that term. Why, for example, do they not use that term in Canons III/IV, Article 4? There it states: “There remain, however, in man since the fall the glimmerings of natural light, whereby he retains some knowledge of God, of natural things,” etc. The question is, why have our fathers not employed the term “common grace” in this passage. You yourself admit that they were familiar with it. You will also agree that, if anywhere, they would have used it here. How do you explain that they do not do this? You cite the example of the deity of Christ. But if you are actually positive about the deity of Christ, would you then avoid the very term? Explain this once, brother.

You have the same thing in our Belgic Confession. There in Article 14 it states: “And being thus become wicked, perverse, and corrupt in all his ways, he hath lost all his excellent gifts which he had received from God, and retained only a few remnants thereof, which, however, are sufficient to leave man without excuse; for all the light which is in us is changed into darkness,” etc. Here again you face the same reality. You will agree with me that the confession is speaking here about things which you would call common grace, correct? You also agree that our fathers were familiar with that term. Question: Why did they not use the term there?

And when they shortly arrive at the rejection of errors, they lay this same term upon the lips of the Remonstrants. This is indeed strange, brother, when you imagine, as you do, that the term was already a favorite with our fathers. Would you please give your explanation of that? If, for example, you would write our confession, brother, would you also handle it this way? Wouldyou omit the term from Article 14 of the Belgic Confession and Canons III/IV, Article 4, and then use it in the way our fathers did in the rejection of errors? No, you wouldn’t, would you? You would put “common grace” everywhere you possibly could.

Well then, my explanation of this fact is that the fathers avoided the term on purpose. The term had a bad aura for them. They did not want it. Therefore they speak of natural light and of the gifts that have remained, but they intentionally speak nowhere of common grace. This explanation leaves nothing to be desired for clarity, don’t you agree? It is a completely different way of reasoning than that which you attributed to us, brother! 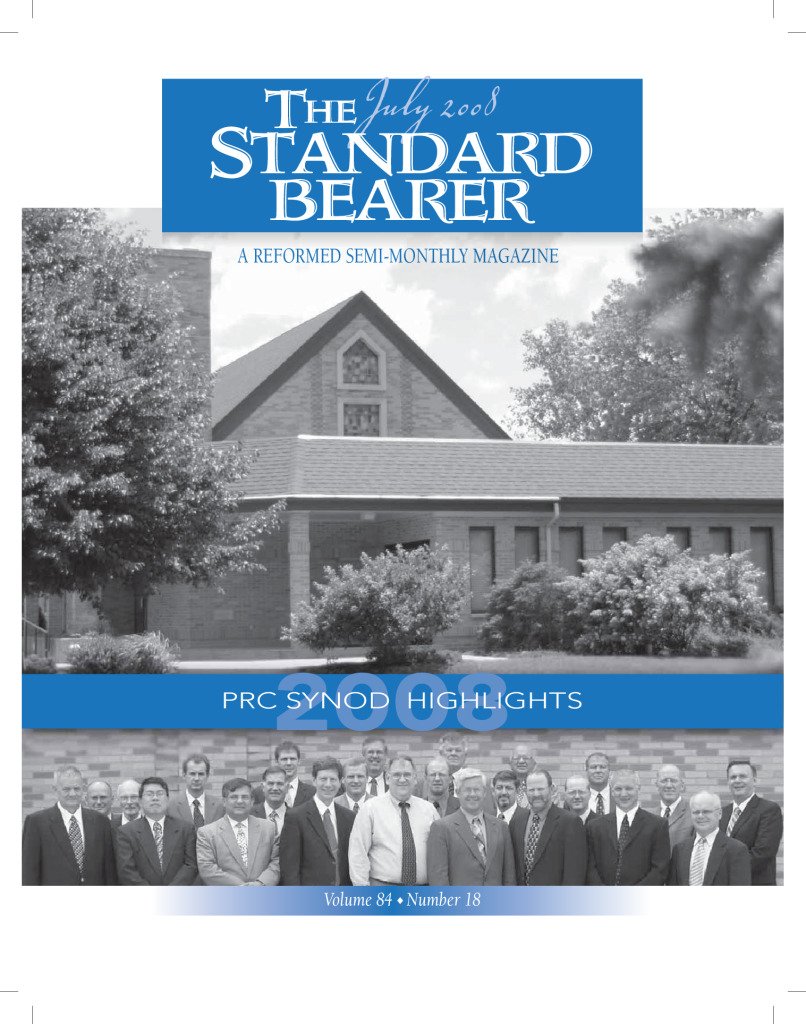