Not Anabaptist but Reformed (14)* Chapter 7. Answers to Questions

Not Anabaptist but Reformed (14)* Chapter 7. Answers to Questions

* Not Anabaptist but Reformed was a pamphlet written by Danhof and Hoeksema in 1923 as a “Provisional Response to Rev. Jan Karel Van Baalen Concerning the Denial of Common Grace.” Translated here from the Dutch by seminarian Daniel Holstege. Previous article in this series: March 15, 2009, p. 285. This article concludes the series.

Having come to the end of his pamphlet, Rev. VanBaalen thinks he must ask us several questions, which, it seems to him, call for resolution.

Now we do not feel obligated to answer every question the brother thinks he must ask us. Moreover, we are also a bit too busy to spend much time here.

But we will oblige him.

And therefore we give the following brief answers:

1) In the first question Rev. VanBaalen wants us to give an explanation of the love that existed between a certain Hector and his wife according to an ancient Greek poet. The occasion for this question is obviously a misunderstanding by Rev. Van Baalen. He thinks that Rev. Danhof might have made the remark somewhere on the occasion of a classical examination that all natural love outside the boundaries of grace is always bestial. Now this is not the case. The question there was whether we sing of natural love in the Song of Solomon, or of the love of Christ and His church. In response to that, Rev. Danhof claimed that natural love as such is never a type of the love between Christ and His people in Holy Scripture. The love between a husband and wife as it originally existed before sin is a picture of the everlasting. After the Fall there is still natural love outside the boundaries of grace, but it was corrupted by sin, and instead of love for God’s sake, it has now become love for its own sake. Does not Article 24 of our Belgic Confession say that without justifying faith man never does anything but out of self-love and fear of damnation? Well then, this natural love, in its very principle corrupted and torn away from God, actually develops into bestiality and whoredom. And, therefore, that love is also a picture of spiritual whoredom, whereas this love in the area of regeneration can again become a type of the bond between Christ and the church. Now then, explain the love between Hector and his wife in some other way, Rev. VanBaalen, always in agreement with our Reformed confession.

2) The second question has to do with products of classical antiquity viewed in the light of our position. Let it suffice to refer the brother to what we quoted above from our confessions: Canons III/IV, 4; Belgic Confessions, Art. 24, etc.; and furthermore, to Calvin’s judgment on this as quoted above.

3) In the third question the brother writes that we have accused Calvin, Bavinck, Kuyper, Warfield, Vos, and others of Arminianism. Our answer is that we have defended principles; we have never gone against persons. Now in this regard we do have doubts about whether you, Rev. VanBaalen, are not tainted with this corrupt error. But this is based purely on what you wrote in your pamphlet. Prove yourself with our confessions that we have doubted you unjustly.

4) In the fourth question we are asked to give an explanation of the behavior of Pharaoh’s daughter, who drew Moses out of the water. This was surely a good deed, says the brother, and that indeed apart from faith. Well then, we want to ask Rev. VanBaalen this question too, and in the light of Scripture and the confessions. The Scripture says, “Whatsoever is not of faith is sin.” And the confessions teach that without this faith no one ever does anything but out of love for himself. This is quite clear to us. Pharaoh’s daughter wanted the beautiful little child. She felt drawn to that particular child. She did not in fact save every little Hebrew who was also drowning in the river. Indeed, we do not read either that she went to Pharaoh to show him the horror of his command, do we? She wanted to make that beautiful little child her son. And if by and by that little child does not want to be called her son, he is in danger of his life. Therefore it is very really a possibility for human mercy still to be sin before God.

5) The last question is really more of a threat than a question. The brother threatens that if we do not yet see the bad consequences of our view, he will be compelled to write another pamphlet in which it is made clear to us that we really are not able to preach well with our view. Here is our answer: Write another pamphlet, brother. There is definitely need for a more grounded and convincing work. 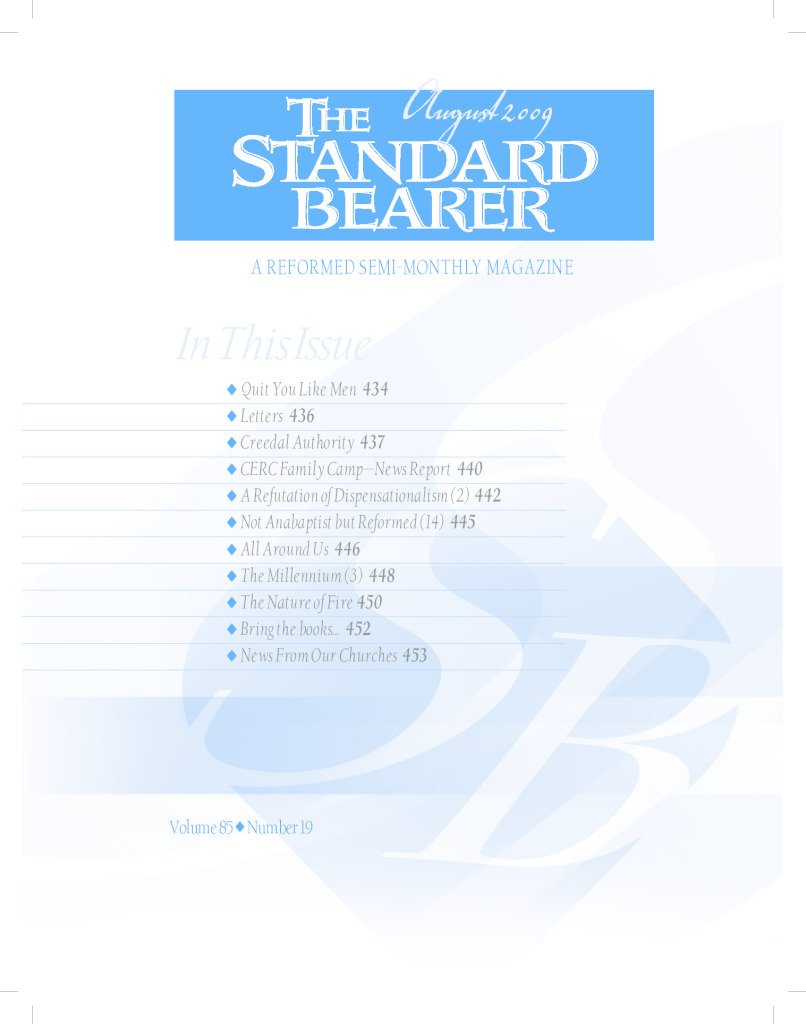