We read in Matthew 6:7: “And when ye pray, use not vain repetitions, as the heathen do: for they think that they shall be heard for their much speaking.”

Does Jesus mean by this that every prayer must be brief, and that a somewhat longer prayer already by itself is judged on account of its length?

For in John 17, the Savior Himself has set a pace in sending upward an extensive prayer; moreover, the Evangelists tell how sometimes for hours together Jesus continued in prayer. Also in the Old Testament, Solomon’s prayer, for instance, at the consecration of the Temple can by no means be called short.

And yet by His warning against the “vain repetition of words” Jesus certainly means to say that too great length injures prayer. For He adds the elucidation that the heathen “think they shall be heard for their much speaking”; and the prayer which He himself puts in the lips of His disciples is one of not three minutes.

Yet it is not difficult to straighten out this seeming contradiction, provided you but put the emphasis upon this “vain repetition of words,” which is presently followed by “their much speaking” (Matt. 6:7).

If you observe this, you will see that Jesus has nothing to say about the duration of your prayer, not about the length of it, but that He objects exclusively, and very definitely, to the verbosity of your supplications, at least insofar as those words are nothing but “vain repetitions,” or, as we would say, a concatenation of hollow sounds.

This evil crept in with all heathen forms of worship. They kept up prayer, but they had lost God; and so their prayer was bound to be devoid of that earnest character of outpouring of soul and of real supplication.

Consequently their prayer became formal, a duty which they performed. He who was most proficient in this counted for most pious; hence that muttering of endless prayers, every time repeatedagain, and this of course had nothing in common with real prayer, while with them it passed as such.

From the heathen world this formal service of prayer had gradually crept in.

And against this Jesus warns.

Ye children of Abraham, do not follow the heathen in this. Keep yourselves from desecrating the holiest that is given us on earth. No muttering of vain sounds. Let your prayer be real prayer.

And yet this warning of Jesus has failed of the mark; and formal, verbose, and long drawn-out prayer has passed from Israel and from the heathen world over into the church of the new covenant.

The Church of Rome uses few long prayers. Her prayers are mostly short, and sometimes even very short. And in this we might learn of Rome.

But Rome’s fault is that she lets the same prayers be prayed too much and too often one after the other. One knows the paternoster. A string of beads with a crucifix attached. And by these beads one counts how many paternosters, Ave Maria’s, and angelic hails, etc., have been prayed.

However well intentioned this might be, it is bound to assist mechanicalness, and so it does. One begins seriously and with good purpose. But soon the thought of prayer is lost. The mouth mutters, but the eye wanders. And long before the task is ended, the latest trace of real prayer is utterly gone. Something that in Romish countries is even seen in the priests, who, seated in all sorts of means of conveyance, aside from their other religious literature, also say their prayers, and thereby noticeably make the impression that the spirit indeed is willing, but the flesh weak.

This gives rise to a false religious sense, as though it merely implies the act of having prayed, and not the outpouring of soul before God.

And so it is again words. A repetition of words. A verbosity which is vain.

Yet, well as it may be to have our eye clearly open to this shadow side of Rome’s practice of prayer, it would be self-righteous if we were to imagine that Jesus’ warning against vain repetition of words had nothing to say to us Christians of the Reformation.

The contrary is true.

Our practice of prayer suffers pitifully from heterodoxy, and in many ways is tainted with sin.

We of the Reformation aimed high. Even too high. And this in a twofold way. First, that we almost always use free prayers, and few written prayers. And again that the demand is put not only to the minister of the Word, but also to every elder, to every deacon, and to every father in his family, to offer, what is called prayer aloud.

This is aimed high, because all leading in prayer is high art, and one which brings great temptation with it.

To pray aloud is something self-contradictory. To pray is to deepen oneself in fellowship with the eternal being; and to pray aloud is to practice fellowship with people around us. And so it comes to pass, that one truly prays earnestly and zealously, but forgets those who are around him, and so makes them to be listeners to his prayer, rather than that he prays with them and for them. While on the other hand the leader in prayer thinks so much about the people for whom and with whom he prays, that he forgets to think of God, and so prays not at all. In which latter case the great temptation arises that he who leads others in prayer becomes ambitious to make “nice prayers,” and so is more anxious how he may please his fellow worshipers by his prayer, than how his prayer may be acceptable unto God.

This temptation is for, oh, so many an unblessed fountain of all sorts of sanctimonious and Pharisaic show.

How often you see that when such people pray for themselves alone, they are so quickly done. It then lasts but for a moment. But when there are others present, or when they lead them in prayer, it seems as though their prayer has no end. Everything must be brought into it. The same things must be repeated and repeated under other forms. It all carries the impression, even upon those with whom they pray, that they but want to show how long and earnestly they can pray.

But with due respect for all this, there is always this sin in it, that they ask too much what people will say about it, and too little whether God will take heed of their supplication.

“To be heard of men” makes them lose their reward with God.

An evil to which sometimes some ministers of the Word have so habituated themselves that it cleaves unto them till their death.

If you would be on your guard against this, there is but one efficient means, and that is that you exercise yourself in prayer.

One thinks that a child can pray. And so he can. But a child prays as a child, because he thinks and speaks as a child. But when you have become a man, you should put away childish things and learn to pray as a man.

And this is a glorious, but also a very difficult art, which is not acquired by praying aloud too soon before others, but upon one’s knees before God.

Many would find it impossible, like Jesus, to spend hours together in prayer.

One has so little to say in his prayer simply because all day long he has thought so little of God. Because even in prayer one has so little fellowship and communion with the Eternal. And also because one feels so little his own deep need and lets the love of fellowship operate so faintly in behalf of others.

Many make even no transition.

They fall on their knees. They pray. They are done. And immediately life resumes its ordinary course.

And that should not be. There must be a transition. One must first inlive in the glory of the sight of God’s majesty, that by the indrinking of that glory the flower bud of the soul may open.

And only he who has so learned to pray by himself in private, and continuously persisted in this practice till at length he entered into it, will be able later on so to pray aloud that it remains real prayer with him.

But to pray in public requires still something else.

Namely, that in the fellowship of those who pray with you, you lose yourself; that you carry their need on your heart; in a priestly way enter into their life; and as having become their interpreter with God, from the heart and soul of all, for them and with them, you call upon the Eternal. 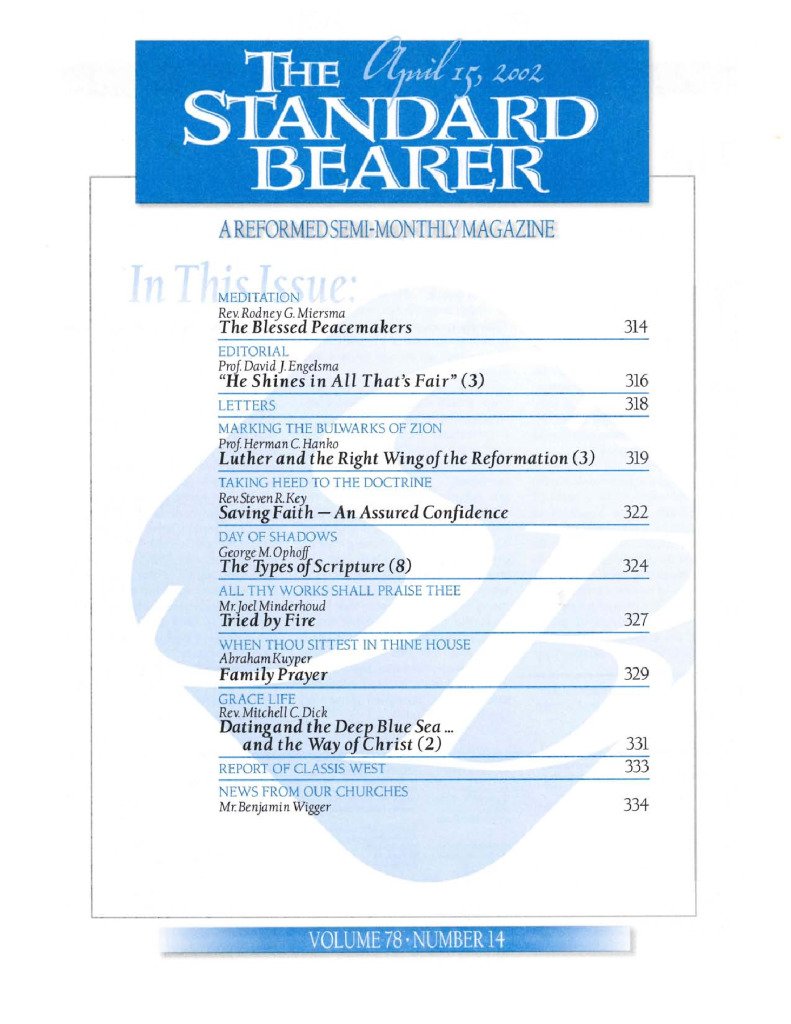