We received the following question:

“Please explain to us the meaning of the last part of the Scripture passage which is recorded in II Chronicles 36:16, which states: ‘until the wrath of the Lord arose against his people, till there was no remedy.’

“Are we correct in believing that God’s ‘remedy’ is His everlasting grace and goodness and mercy toward His covenantal people as found in the work of His Son, Jesus our Savior? Surely there must have been, even very small, a remnant among the people during the days of Zedekiah; what happened here? No ‘remedy’?

“Or has the Lord come to a point where there was no way out but to send the ‘king of the Chaldees’ upon them? No remedy, all destroyed!”

The term “remedy” should not be regarded as being synonymous with God’s “everlasting grace and goodness and mercy toward His covenantal people.” As is evident from the marginal reference in some Bibles, the word for “remedy” in the original Hebrew is “healing.” There was no healing; Judah’s ailment was unto death! This does not refer to individuals in Judah, but to Judah organically, as a nation.

We read of the kings who reigned over Judah at that time, that they did evil in the sight of the Lord and committed abominations before Him, making themselves abhorrent in God’s sight. King Zedekiah in particular did not humble himself before the prophet Jeremiah, who spoke in God’s name. Also the priesthood was corrupted and became a powerful influence in corrupting the people. We read that they “transgressed very much after all the abominations of the heathen; and polluted the house of the Lord, which he had hallowed in Jerusalem.”

God had not silently ignored these evils, but “the Lord God of their fathers sent to them by his messengers, rising up betimes, and sending; because he had compassion upon his people and his dwelling place” (Jer. 26:5; Jer. 29:19).

This statement, “because he had compassion upon his people and his dwelling place,” is often taken to mean that God had compassion upon the entire nation of Judah. In that case, God insistently and repeatedly sent His servants to plead with and beg rebellious Judah to repent and return to the Lord. Only when God failed to bring them to repentance, when every remedy failed, was He forced to surrender them to the Chaldees. Anyone can see that this interpretation is an outright denial of the sovereignty of God, Whose counsel stands and Who does all His good pleasure. It also makes our salvation dependent on us. Who, then, can be saved?

What may seem a bit strange to us is the fact that the expression “his people” is used in a twofold sense here. In verse 15 we read that God sent messengers “because he had compassion on his people, and on his dwelling place.” In verse 16 we read that “the wrath of the Lord arose against his people, till there was no remedy.” Seemingly “his people” refers in both instances to the same people. Yet in the light of all of Scripture this is impossible. God’s compassion is eternal, unchangeable, even as God is eternal! God’s compassion is based on the atoning death of His dear Son on the cross. God will never ignore that! Yet this creates no real difficulty, since the expression “his people” is used in a twofold manner in the Old Testament. Israel as a nation was the typical people of God. But Israel as a nation was not the same as God’s elect in Christ Jesus, who belong to Him on the basis of the atoning death of the cross, resting on sovereign election! In verse 15 God’s elect people are referred to, as is evident from the fact that they are mentioned in one breath with God’s dwelling place. God remembered His covenant with Abraham, which included the promise, “I will be your God and the God of your seed,” as became evident through God’s dwelling place in Jerusalem. But in verse 16 God is speaking of Israel as a nation which, with its kings and its priests, had mocked God’s messengers, despised His words, and misused His prophets.

Thus the preaching of God’s Word had a twofold effect also in the kingdom of Judah in the time of its apostasy. This Word came to God’s elect in His compassion with the purpose of saving them out of the midst of an apostate nation. Although their faith was not evidenced at the moment, we know that there were men like Daniel and his three friends who remained faithful to God even in Babylon. We know also that there were others who hung their harps on the willows, in longing for Jerusalem, who could not sing the songs of Zion in a strange land. God’s faithful remnant was sustained by the power of His Word, as a savor of life unto life. On the other hand, that same Word, through the same preaching, was a savor of death unto death for those who rebelliously opposed it, mocked with it, and rejected it. They were only hardened by the preaching. They were corrupt, rebellious; their sins were like filthy, festering ulcerous sores that were eating away at their souls.

Thus thy filled their cup of iniquity. God proved Himself just in their condemnation. This was the case with Pharaoh, king of Egypt, of Ahab, king of Israel, of those who crucified the Christ, and will again become evident at the end of the ages when, according to the Book of Revelation, the wicked will reveal their true rebellious nature, for “they repented not”! 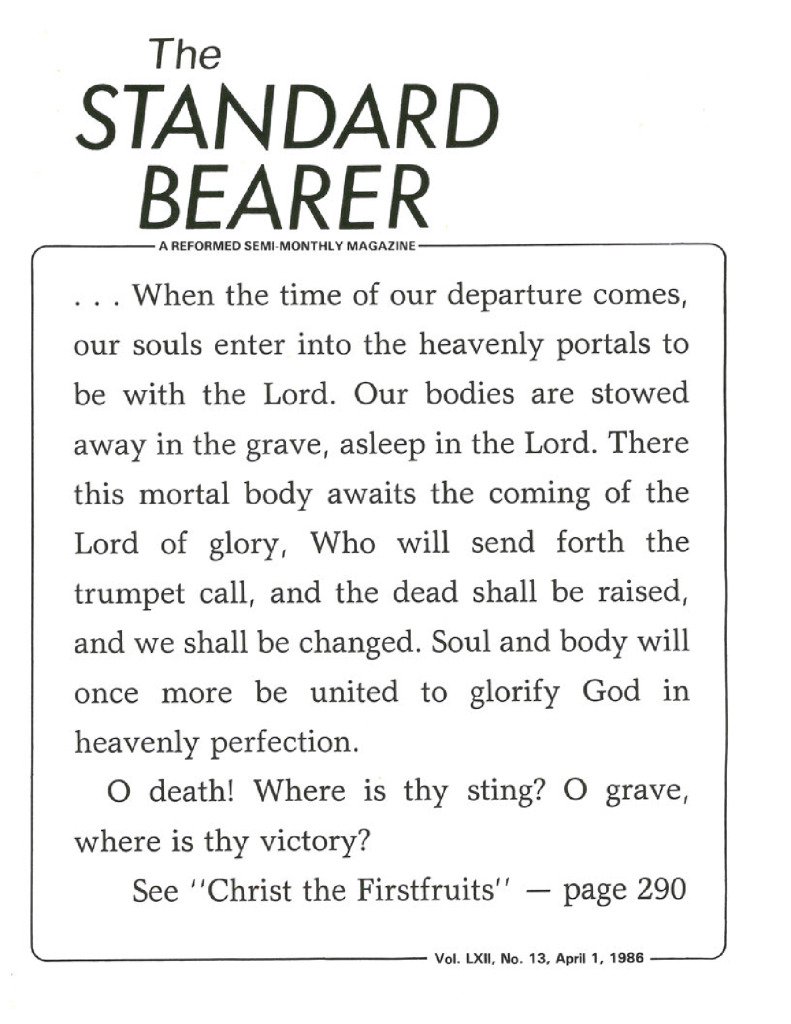