The delegation of Gerald Brummel, representing our churches’ Foreign Mission Committee, and Alan De Boer, representing the calling church, the Doon, IA PRC, arrived in the Philippines in mid-January for their annual visit with missionary pastors Rev. D. Kleyn and Rev. R. Smit and their families. This visit is part of the ongoing work of our churches in the oversight of the missionaries and the mission field. In the time spent there the men were busy conducting family visitation with the missionary families, observing and discussing the work of the missionaries, and meeting the saints in this field.

They were scheduled to arrive late Wednesday evening, January 12, but were unable to set their feet on Philippine soil until early Friday morning (around 1:00 a.m.). Ice on their plane in Sioux Falls resulted in a missed flight out of Minneapolis, so they were rerouted to Detroit, spending the night there. Then they were rerouted again. Finally after more than 48 hours of travel, they arrived safely in the Philippines, glad to be there and thankful for the warm temperatures and warm hospitality extended to them. From Sharon Kleyn’s blog, available through d.kleyn@prca.org, we learn that the one thing that could not keep up with all their rerouting was their luggage. It eventually turned up at the Kleyns 24 hours later, at 12:30 Saturday morning.

On their first Sunday in the Philippines, the delegation planned to accompany the Kleyns as they together worshiped in the morning at the First Reformed Church of Balacan. In the afternoon they hoped to attend the second worship service of the Berean PRC in Quezon City, Manila.

The Committee for Contact with Other Churches sent its annual delegation to our sister church in Northern Ireland, the Covenant PRC in Ballymena, in January. Rev. Doug Kuiper, from the Randolph, WI PRC, and Mr. Jim Holstege, member of our denominational Contact Committee, made this year’s visit. Their plans included conducting the requested annual church visitation with the Session of Covenant PRC. Rev. Kuiper also preached at Covenant twice on January 9 and gave a lecture midweek on the subject, “Grieve Not the Spirit: Sins Against the Holy Spirit.” After a congregation dinner on Friday evening, the delegation accompanied Rev. M. McGeown back to Limerick in the Republic of Ireland, where Rev. Kuiper preached twice on Sunday, January 16, for the Limerick Reformed Fellowship, and gave a lecture the next day on: “What Does It Mean To Be a Christian?” before returning home on Tuesday, January 18.

Eleven of the professors and student body of our PR Theological School attended a conference at Westminster Seminary in Escondido, CA the second week of January. Plans for that trip included also spending a weekend with the congregation of the Hope PRC in Redlands, CA. Seminarians Jon Mahtani and Nathan Decker brought a word of edification on Sunday, and Professors Dykstra and Gritters presented the pictures of their trip to South Africa and Namibia after the evening worship service. In connection with that visit, Hope also organized a Bean Bag Toss tournament, and then served dinner, that Saturday afternoon, as a way for their congregation to enjoy fellowship with the seminarians and professors.

The Hope congregation in Redlands was not the only congregation that recently enjoyed the presentation of the trip made to South Africa and Namibia last summer by Professors Dykstra and Gritters. It appears that Prof. Dykstra made a slight detour on the way home to Michigan from California to the Loveland, CO PRC, where he, on behalf of our Contact Committee, gave a presentation on Monday evening, January 17. There was a collection taken for the Contact Committee to help offset the costs of Prof. Dykstra’s travel expenses for that presentation.

The Covenant of Grace PRC in Spokane, WA received the good news that ACN radio had graciously given them an extra two hours of broadcast time (4 half-hour slots) on Sunday evenings at 6 p.m. in January. The radio station planned to rerun the introductory interviews that Revs. Bruinsma and Kleyn recorded in September. Covenant’s new broadcasts on the entire ACN network have brought some immediate responses, with phone calls from Spokane Valley, Yakima, and Pasco, requesting materials and sermons.

The Council of the Calvary PRC in Hull, IA informed their congregation that the completed engineered drawings for their church building have been received, and that their New Property Committee is now soliciting bids for the church building. That information will be brought to the Council for review when it is completed, and then, we assume, on to the congregation for their review as well.

The Council of the Hudsonville, MI PRC invited all of the members of their congregation to a meeting on January 20 to provide information about the proposed expansion of their church building. Hudsonville’s young people invited the congregation to stay after the meeting for a dish of ice cream with toppings, as a fundraiser for their 2011 convention expenses.

The Consistory of the Grace PRC in Standale, MI decided to start “Pre-service Singspirations” prior to their evening services on the first Sunday of each month. This was seen as a means to encourage the communion of saints and an aid to preparation for the worship service.

The Consistory of Grace also responded positively to a request from the seminary to take responsibility for the internship of Seminarian Vernon Ibe for six months beginning July 1.

Rev. G. Eriks declined the call from the Trinity PRC in Hudsonville, MI.

The Cornerstone PRC in Dyer, IN extended a call to Rev. R. VanOverloop to serve as their next pastor. 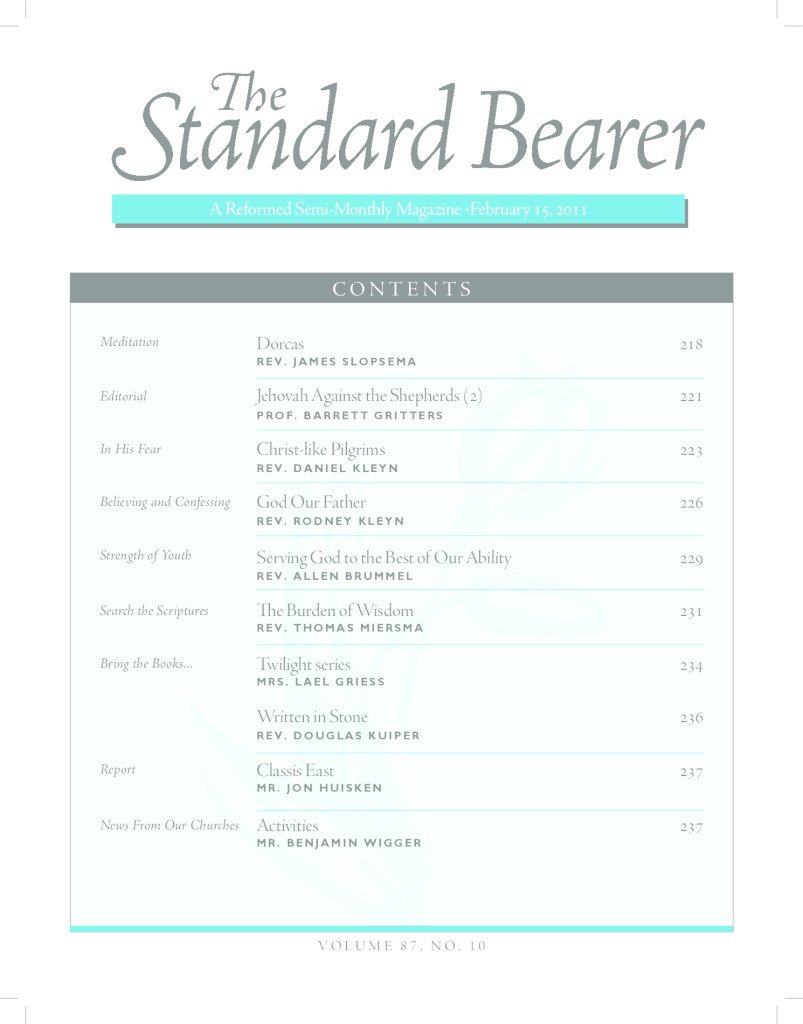