This year’s Fall Ladies’ League Meeting, made up of ladies from PR churches in Iowa and Minnesota, met at the Doon, IA PRC on October 11 to hear Rev. R. Dykstra speak on the topic, “The New Age Movement in Our Day,” based, on Isaiah 5:13-30.

Our Southeast PRC in Grand Rapids, MI played host to this year’s Mr. & Mrs. and Adult Bible Societies League Meeting on September 27. This year’s meeting featured Rev. R. Cammenga, speaking on “The Importance of Society Life in Our Churches.” A collection was taken for Rev. Kortering, to be distributed to needy ministers with whom he comes in contact in his work in Singapore.

Also on September 27 there was the annual Fall Men’s and Ladies’ League Meeting held at the First PRC in Holland, MI. Prof. D. Engelsma spoke on the theme, “The Church in the World.”

Mentioning Prof. Engelsma’s name also reminds me that his eschatology class resumed meeting on September 21 at 7:45 P.M. at the Faith PRC in Jenison, MI and will thereafter meet on alternate Wednesdays, D.V.

Prof. H. Hanko is leading a Bible Study class at our Hope PRC in Walker, MI on Monday evenings at 8 P.M. The first topic of study this fall was prayer. All were invited to attend, but a special invitation was extended to young confessing church members.

On the evening of October 21, the Mothers’ Circle of the Hope Christian School in Redlands, CA hosted a Fall Banquet. Their theme this year was to be in celebration of their school’s 20th anniversary.

The Fund-Raisers of the Loveland, CO PR Christian School recently sponsored what I think was a rather unusual event. They sponsored a Western Night and Chile Cook-Off. One could not only enter the cook-off, but he could also enjoy a meal of cowboy food, consisting of a menu of barbecue briskets, potatoes, cowboy beans, corn bread, and peaches. All events were held in the field in front of the school, so participants were encouraged to bring their lawn chairs, dress up in their western duds if they wished, and enjoy an evening of cowboy food, music, and fun.

The Federation Board of our churches’ Young People’s Societies recently sponsored a travelogue by well-known Christian travelogue artist Don VanPolen, entitled “Songs of Faith from Around the World.” Mr. VanPolen took the viewer to 12 countries and told the stories behind 15 well-known hymns. This event was held at Faith Church on September 28.

The Young People’s Society of the First PRC in Edgerton, MN recently sponsored a hamburg and hotdog fry for their congregation at Edgerton City Park. Besides supper, everyone was encouraged to come out for a time of fellowship, volleyball, and softball.

Although I lack details, I want to include here that on the evening of October 21, the congregation of Lynden, WA PRC met in their church for a farewell program for Rev. Haak, his wife, and their three daughters.

And, related to the Haaks’ leaving of the Lynden congregation, there was a note of thanks from the Bethel PRC in Elk Grove Village, IL Building Committee, thanking their congregation for the effort put forward to refurbish their parsonage. The congregation was also reminded to reserve the dates of October 28 or 29 to help unload the furniture of the Haaks, who hoped, the Lord willing, to arrive in Bethel that weekend.

Rev. W. Bruinsma, pastor of the First PRC in Holland, MI has declined the call he was considering to serve as the next pastor of Byron Center, MI PRC, which was recently left vacant by Rev. Gritters’ acceptance of the call to Hudsonville. 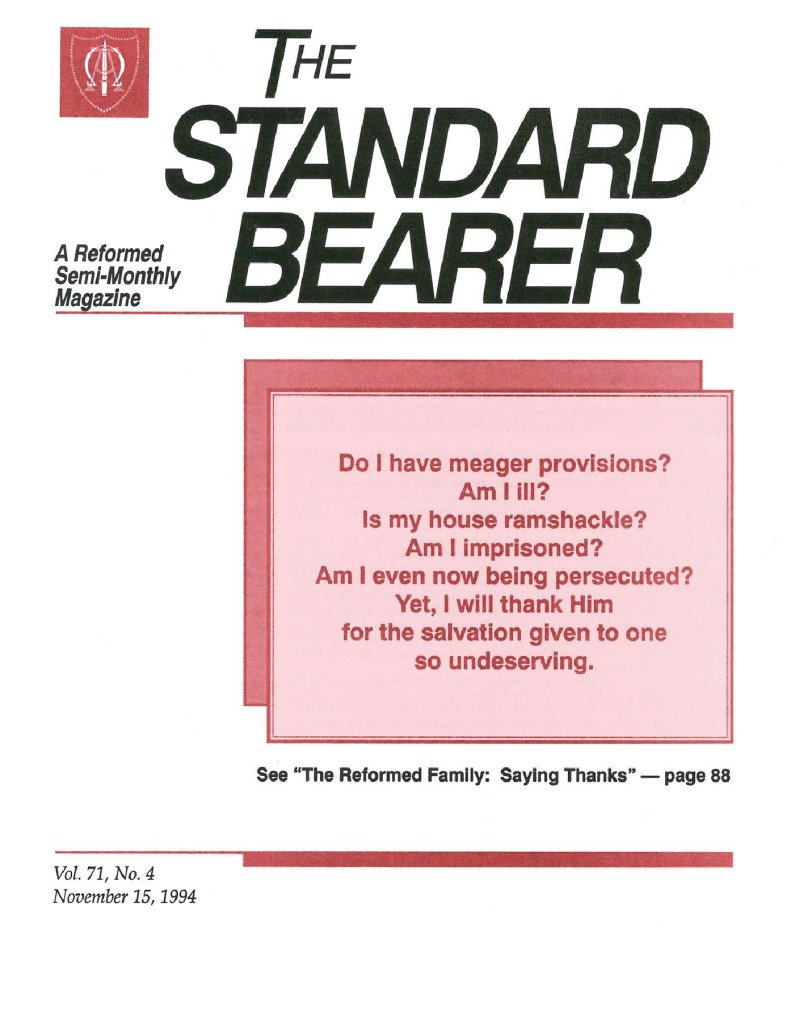