The Council of the Georgetown PRC (now of Hudsonville, MI) was able to report to their congregation that the Heritage Christian School Board granted their request to allow the use of Heritage’s facilities for their worship services. The first service held at Heritage Christian School, 4900 40th Ave. in Hudsonville, was November 27. This move was made necessary for two reasons: Bauer Elementary School is scheduled to undergo a major face-lift beginning this winter, which means that their gymnasium would no longer be available, and, second, after Georgetown’s organization back in March of 1994, their membership has swelled to over 60 families, making larger facilities a necessity.

We can also report that Georgetown’s parsonage is near completion. Since construction began in late August, the parsonage, located in Georgetown Estates in Hudsonville, MI, has been steadily moving toward completion. If all goes as planned, Rev. VanOverloop and his family could be moved in by the middle of this month.

Georgetown’s Building Committee is also busy searching for a suitable piece of property for a future church building. However, it has proved very difficult to find five or more acres of land in the Bauer, MI area.

In a follow-up to our last church news, we received word that the city of Lansing, IL reviewed the re-submitted building plans and returned them to our Peace PRC in Lansing. The plans of Peace Church for correcting the soil problems on their proposed building site have been approved. But no permit was given to begin building. There appear to be about ten small items which have yet to be changed before final approval can be given.

The Council of our First PRC in Grand Rapids, MI held an open house on Saturday, December 10 in honor of Rev. George Lubbers and his wife, Rena. In September of 1994, Rev. Lubbers celebrated 60 years in the office of pastor. A quick check of our churches’ yearbook reveals that during those 60 years, Rev. and Mrs. Lubbers served our churches in, six different congregations, once as home missionary, and once as missionary in Jamaica.

Rev. Tom Miersma preached his farewell to his congregation at First PRC in Edmonton, GAB, Canada on November 27.

The Miersmas expressed their thanks to the congregation in Edmonton for the kindness and love shown to them, not only at the farewell evening given on their behalf on November 18, but also for the twelve years that the Lord privileged them to serve among the church there.

Rev. George Lanting, another of our churches’ retired ministers, was this year’s speaker for the annual Reformation Day Lecture at the Immanuel PRC in Lacombe, Alberta, Canada. He spoke on the topic, “The Reformation: Liberty for the Believer.” In addition, Rev. Wayne Bekkering, pastor of the Pella, IA PRC, spoke a day earlier at the First PRC in Edmonton. He spoke on the theme, “Our Reformational Responsibility.”

The choir of the Loveland, CO PRC gave their annual Thanksgiving concert for their congregation on November 20.

The choirs of Byron Center, MI PRC and Hope PRC in Walker, MI gave the first of their two combined concerts on December 4 at Hope Church. Plans called for the concert to be repeated again on January 1 at Byron Center.

The tentative date of Rev. Tom Miersma’s installation as home missionary for our churches was set for December 18, the Lord willing. More about Loveland PRC’s plans for this as they become available.

Collections taken by the Hudsonville, MI PRC, calling church for our mission field in Northern Ireland, have made it possible to purchase a new washer and dryer for the Hanko family. Their present machines are both very old and very small.

Hudsonville’s Council also appointed a committee to plan the upcoming furlough of the Hanko family this summer, D.V. They want especially to schedule speaking engagements by Rev. Hanko throughout the States, for the promotion of the field.

On October 23 the Evangelism Committee, along with the congregation of the First PRC of Holland, MI, sponsored a special church service in which a special invitation was extended to the Holland community.

Rev. W. Bruinsma preached on the Word of God found in II Timothy 3:16, 17 under the theme, “The Profit of Holy Scripture.”

Rev. J. Slopsema, pastor of the Hope PRC in Walker, MI, declined the call he had been considering to serve as the next pastor of the Byron Center, MI PRC.

In the Lord Jehovah we have righteousness and strength; let us trust in Him for ever. Let the times roll on, they cannot affect our God. 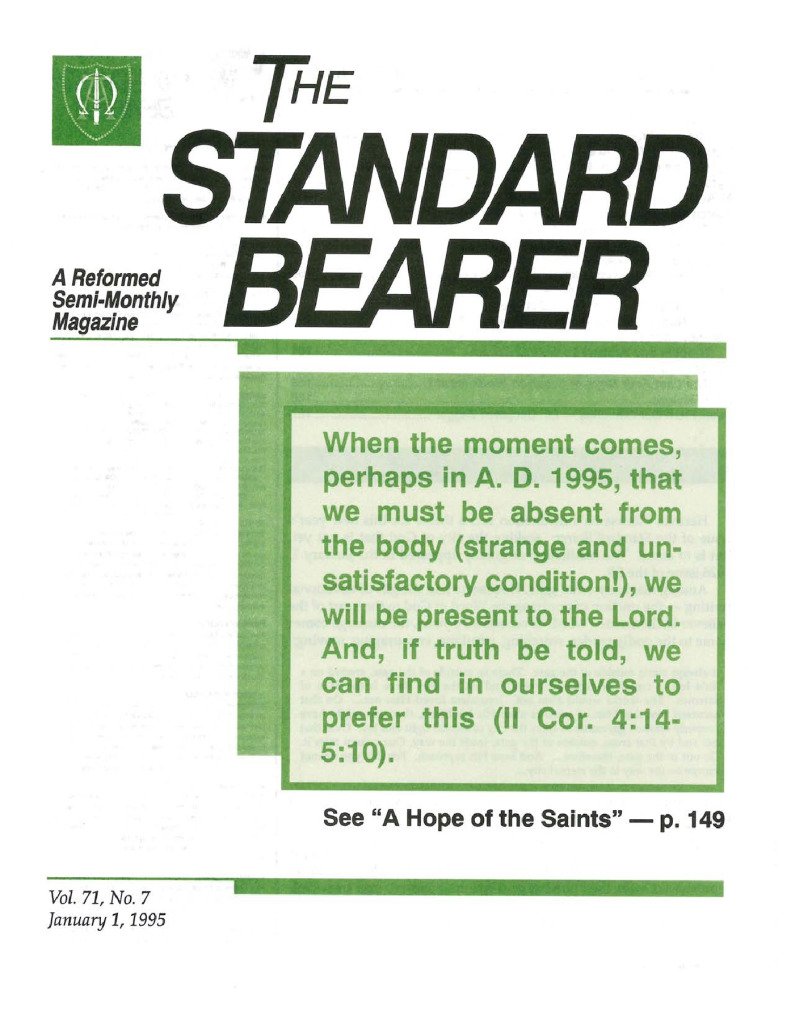