Rev. Van Overloop, pastor of our Hope Church in Walker, Michigan, returned to his congregation early in April after spending some time in Houston, Texas, working there with our missionary, Rev. R. Harbach. Rev. Van Overloop gave the following report to his congregation in his April 11 bulletin: “Your pastor gives thanks to God for being safely brought back to your midst after working with Rev. Harbach for two full weeks. Because the size of the group in Houston is small (3 families, 18 souls) we should not despair and come to the conclusion that the time has arrived to pull out and close the field. To ‘shake off the dust of our feet’ (Matt. 10:14) is not a move to be taken lightly. But even apart from that it is my opinion that there is still much work to be done. Through various contacts which were made, I am convinced that there is potential which has not been touched heretofore. Let us remember this field and their missionary in our prayers and let us not expect the rate of growth in a mission field to be any faster than the rate of growth our congregation experiences from without.”

Rev. Moore has accepted the call to Edmonton, Alberta, Canada, but due to immigration laws his move has been delayed. One of the steps Rev. Moore had to take was to journey to Chicago and undergo a personal interview with the Canadian Council. His original goal was to be in Edmonton by May 1st. Whether that will be possible or not remains to be seen.

The Edgerton consistory decided that the church kitchen was in need of some refurbishment. A night was set aside last February during which the families of the congregation were given the opportunity to make a gift for this project. A total of $523 was collected on the Kitchen Fund drive. We trust that on various special occasions some rather pleasant smells will again be coming from that kitchen.

With the coming of Spring also comes Spring weather. Several of our Michigan churches have had notices in their bulletins concerning the policy of that church in regard to holding church services in the event of a “tornado watch” or a “tornado warning.” The Council of Southwest Church has purchased a “weather alert system” to give warning of severe weather conditions as they develop.

Two of our Michigan church bulletins have contained reports from their deacons regarding the dwindling balance in their Benevolence Funds. In this time of much material wealth and a great number of social welfare programs administered by state and national governments, it is good to see that the work of Christian Mercy as performed by the deacons has not disappeared in the Protestant Reformed Churches as it has in many churches of our day. In their 1975 Financial Report, the deacons of First Church in Grand Rapids reported disbursing over $21,000 in assistance to the needy for the year.

The last in a series of lectures given in Rock Valley, Iowa, by the Reformed Witness Committee was scheduled for March 24. Rev. Moore’s topic was “Preaching and Discipline: A Vital Unity.” The work of the Reformed Witness Committee is supported by our churches in Hull and Doon, Iowa, and Edgerton, Minn. These same churches also scheduled an Officebearers’ Conference on March 30 in Edgerton. Rev. Slopsema spoke on “Christian Giving and the Mercies of Christ.”

A little further to the East, another Office Bearers’ Conference was scheduled on April 6 at Hope Church in, the Grand Rapids area. Prof. H. Hanko was to speak on the question, “When Family Discipline Fails, When Should Church Discipline Be Applied?”

The Young People’s Societies in our churches across the land seem to be very busy sponsoring all kinds of activities, including car washes, soup suppers, singspirations, talent nites, roller skating parties, banquets, swimming parties, family nites, and a few more activities—all with the goal of raising funds for the 1976 Young People’s Convention scheduled for late August at Camp Geneva on Lake Michigan. I have a suspicion that the Young People, in addition to raising funds, might even be enjoying a good time! 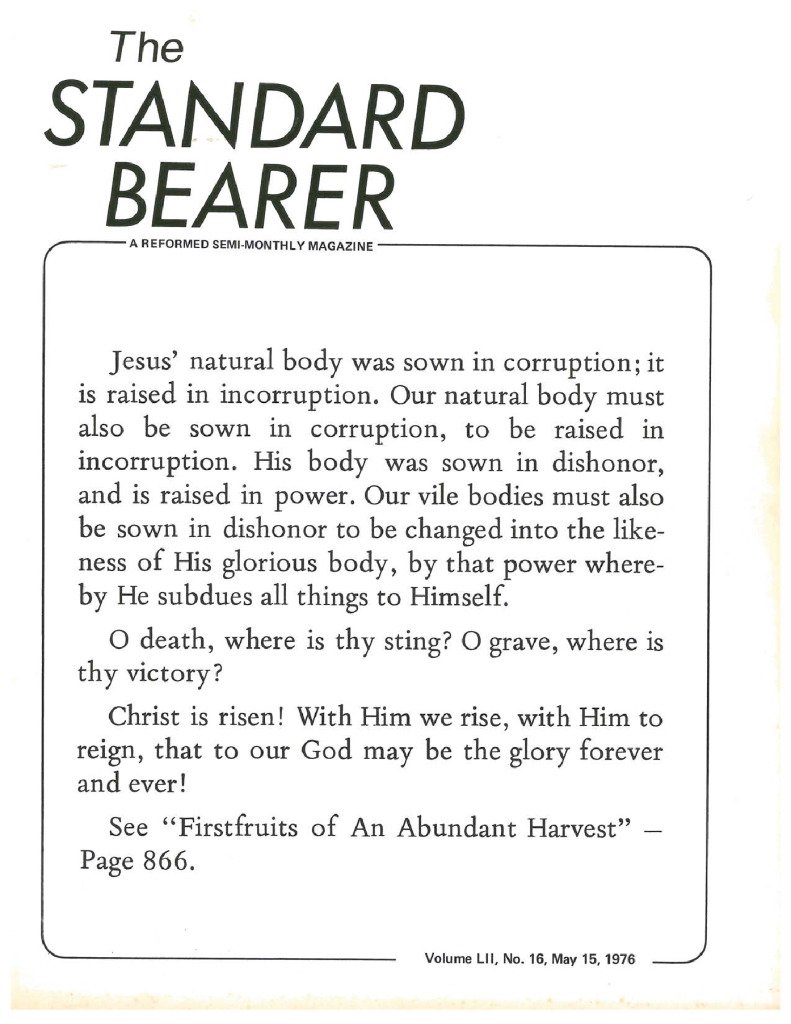