The Covenant Reformed Fellowship of Ballymena, Northern Ireland has taken upon itself to republish a book long out of print entitled “The Revival of 1859.” This book was first written, by Rev. William Hamilton, about six years after that revival took place in Northern Ireland.

In the book the author evaluates that “revival” in the light both of Scripture and of the Westminster Confessions, and he finds the event seriously wanting.

The reprinting of this book became possible when the Reformed Book Outlet of Hudsonville, MI, together with its sponsoring societies in the Hudsonville PRC, agreed to underwrite the cost of the republication.

In the introduction to this book, Rev. Ron Hanko, missionary to the CRF of Ballymena, writes an answer to the question of why to publish another book on the revival of 1859. He writes in part: “It is the fashion among modem evangelicals to pray for revival. It seems at times that they have pinned all their hopes for the future of the church on the prospect of another revival like that of 1859 in Northern Ireland or like the Great Awakening in America. Hamilton’s book, therefore, is not just a scathing critique of a specific revival, what happened in Northern Ireland in 1859, but of all revivalism. It says things that need to be heard by those who think or act as if revival is the sum and substance of true religion.”

In addition to the work of reprinting this book; the CRF also planned a series of Gospel meetings for the first full week of September. These meetings were to be held every night of the week in the Ballymena Town Hall. Their purpose was to bring the gospel to those who had never heard it before, and to unbelievers as well.

Rev. J. Kortering and his wife arrived back in the United States in early August to enjoy a furlough with their family. Plans called for the Korterings to remain here for about a month before returning to Singapore and the Evangelical Reformed Church.

We do know that while here Rev. Kortering was able to preach for the Grandville, MI PRC, his former church before becoming minister-on-loan to our sister church in Singapore, as well as the congregation of the Hope PRC in Walker, MI, his current calling church. Rev. Kortering was also able to present a program on August 31 at Hope Church concerning the work of the PRC with their sister churches, in Singapore. The program included a slide presentation by Rev. Kortering and a short talk by Seminarian Fook Meng a member of the ERC of Singapore and presently attending our churches’ seminary.

Rev. R. Dykstra, in the Lynden, WA PRC for a session of Classis West in early September, was able to give a brief speech and show slides on the mission work in Ghana, Africa on the behalf of our churches.

We could also add here that Rev. B. Woudenberg, pastor of the Kalamazoo, MI PRC, left August 25 to work for two weeks with the, Reformed churches in Transylvania.

On the 26th of August, the Southwest PRC in Grandville, MI was host to our annual Seminary Convocation. Prof. R. Decker spoke on the theme, “Lest We Drift.”

And we couldn’t help but be reminded recently, by an announcement in the bulletin of the Hope PRC in Walker, MI, of just how fast time goes. In their bulletin of August 29 there was an announcement that that Sunday was the last week of Sunday School. That same week, teachers were sending home with the Sunday School students Christmas songs for Hope’s annual Sunday School Christmas program. I guess when you see that, you know summer is over and soon winter will be here.

And, finally, we end this issue of the “News” by reporting to our readers that Rev. R. Cammenga has accepted the call to serve as pastor of the Southwest PRC in Grandville, MI. I have heard that the Cammengas were making plans to be at Southwest by the end of September. So quite possibly by the time you read this he could be installed as pastor at Southwest. But those details will have to wait until next time.

And due to Rev. Cammenga’s leaving the Loveland, CO PRC to serve in our Southwest PRC, the Council of Loveland formed a trio from which to call a new pastor. That trio consisted of the Revs. W. Bruinsma, B. Gritters, and R. VanOverloop. 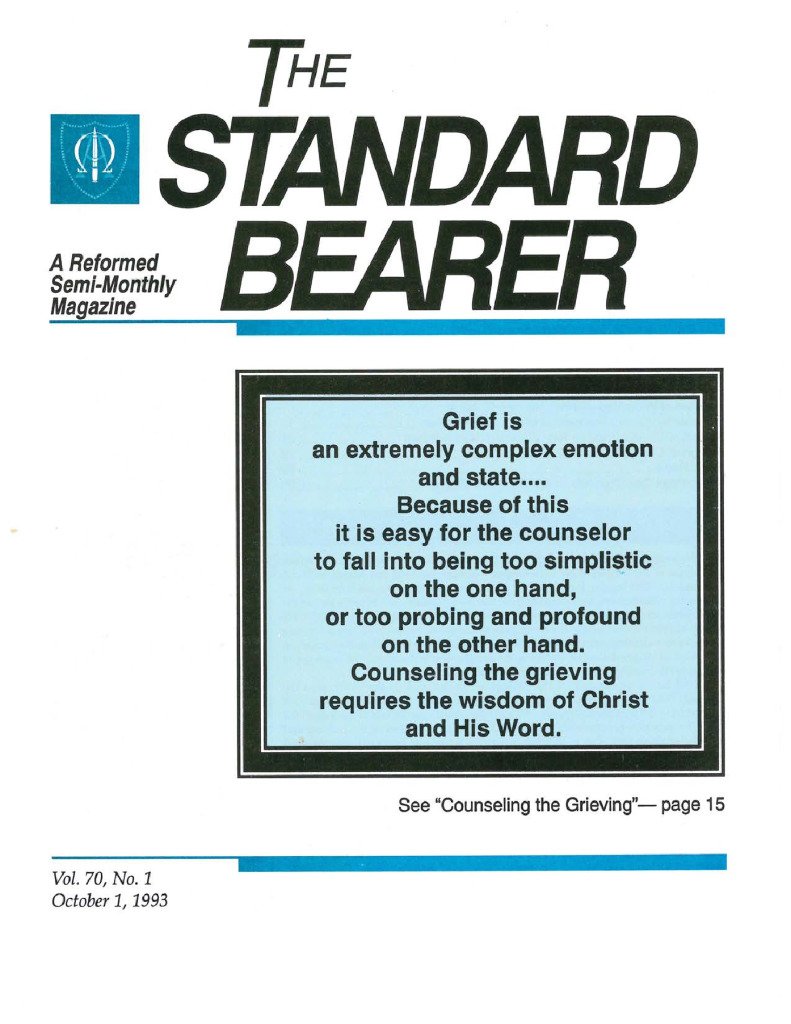