Rev. Joostens has declined the calls extended to him from Redlands, California and Lynden, Washington. You may remember that Lynden’s call was for a missionary to the Monroe – Mt. Vernon area of Washington state. From a Loveland bulletin we have learned that Isabel, South Dakota has extended a call to the pastor of our Edmonton, Alberta, Canada congregation, Rev. Moore.

By the time our readers receive this issue of the Standard Bearer, all twelve (see if you can name them all) of our schools will again be in operation. Since school is now fresh in our minds, maybe this would be a good time to relay some information concerning school-related activities that have come into my possession via bulletins, newsletters, and personal contact. The building projects of Hope School in Grand Rapids, Michigan and the South Holland, Illinois school are still in the planning stages. A South Holland newsletter expresses the hope that their planned addition can begin following a fall financial drive. The Hope School building project involves the building of a whole new plant of ten classrooms in the Hudsonville, Michigan area. The actual erection of this facility, however, is to be done in three phases. At this time, Hope is looking for a September, 1982 opening for the first phase. A different kind of expansion project has taken place in Lynden, Washington: they have added a grade, the eleventh, to their educational program.

In the school recreational sphere we are informed by a Hull bulletin that, “The annual 4th of July picnic will be held this year in Edgerton at the Free Christian School. There will be games and activities for all ages. A canteen service will be provided. Proceeds from the canteen as well as a special offering will be divided equally among the Hull, Doon, and Edgerton schools.”

The teachers of our Grand Rapids area schools had the opportunity to attend a summer seminar sponsored by the Federation of Protestant Reformed School Societies. Under the able leadership of Prof. H. Hanko the teachers received instruction at eight evening sessions on the general topic ‘of “Biblical Psychology.”

Last but certainly not least concerning our schools: Prof. H. Hanko gave the address at the Convocation Services for our Seminary on September 2 at Southeast Church in Grand Rapids.

From across the Atlantic we have some additional school news of interest. Back in April we wrote about the Association for Christian Education in Ireland and asked for more information concerning that organization. In response to our request Rev. Tom Reid, treasurer of A.C.E.T. writes, in part: “The Association for Christian Education in Ireland grew out of the concern of several members of the Reformed Presbyterian (Covenanter) Church of Ireland for reformed, parent-controlled education for their covenant children. The Testimony of that Church commits the denomination to the idea of such schools, but none exist at the present time. At the request of some members, the 1978 Synod of the Church set up a Sub-Committee on Christian Education to investigate the matter. After discussions lasting one year, the Sub-Committee recommended that the church itself not set up schools, but provide a framework in which such schools would become reality. After another year of work by a reconstituted Sub-Committee, the Association for Christian Education in Ireland was formed in Belfast in April, 1980, with eight charter members. It has since grown to 32 members, most of them found in the greater Belfast area, but others in northern County Antrim, Londonderry, and the Irish Republic. The Association holds public meetings throughout the north of the island, and finds gradually increasing interest stretching across denominational divides but generally involving people of evangelical and reformed theology.” (Subscribers to Perspectives in Covenant Education are asked to excuse the above duplication of effort. Non-subscribers to that periodical might want to subscribe in order to find out what of Rev. Reid’s letter was not included in this column. To subscribe send to: Perspectives, Protestant Reformed Teachers’ Institute, c/o Covenant Christian High School, 1401. Ferndale Ave., S.W., Grand Rapids, Michigan 49504.) We extend our thanks to Rev. Reid for sending us this information. Whether our schools are realizededucational institutions or those only of anticipation, the words of Rev. Reid’s final paragraph can be appreciated, I believe, by everyone concerned with Christian education: “The members of the Association have had to bear the reproach of many who believe they are fundamentalistic or impractical or both. Yet their hope is not in men but in the Lord of the covenant, who has entrusted them with the precious children of that covenant to nurture and instruct. Can they do anything less than provide a school where the instruction of church and family will be reinforced, and indeed, developed?” With what better commitment could we begin another school year? 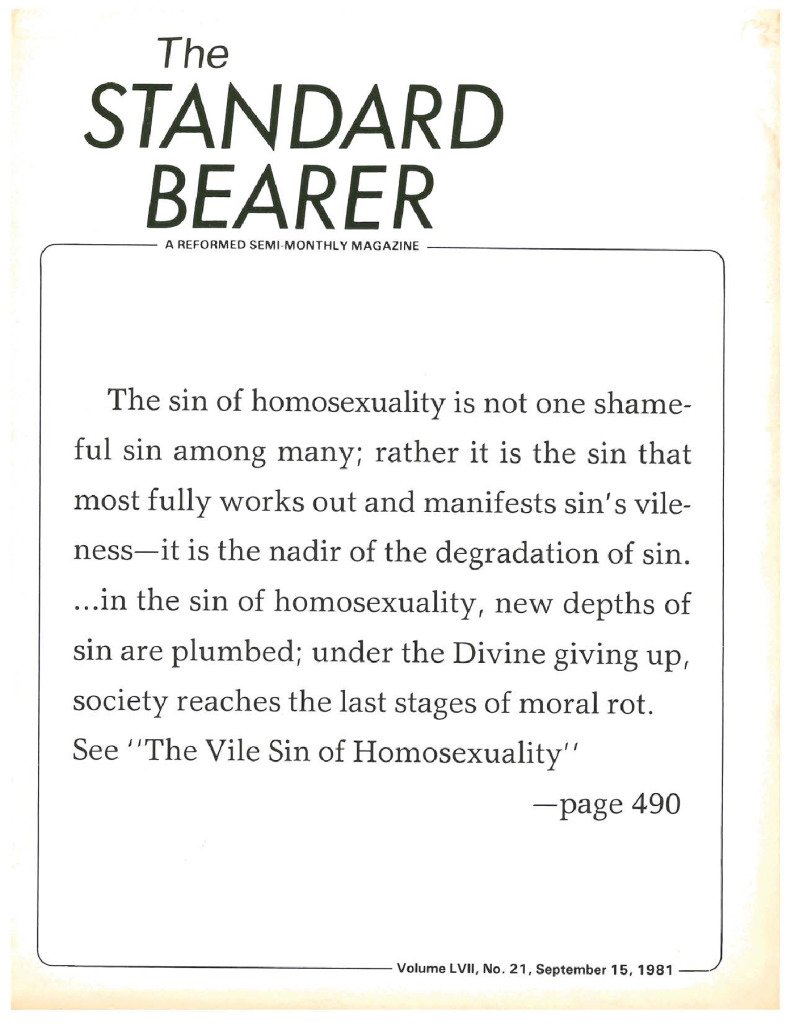