It has been a couple of months now since we have had a church profile in our news. Let’s change that by looking at the history of Randolph Protestant Reformed Church in Randolph, Wisconsin.

In 1942 the Mission Committee of our churches came to work in the Randolph area. Rev. C. Hanko, with his consistory of the Oak Lawn, IL, congregation, was instrumental in these beginnings. In Sept. of that same year, the interested group rented the Congregational Church in town, using it Sunday afternoons and evenings.

In August of 1943, Randolph Protestant Reformed Church came into being as an organized congregation. There were eight families with a total of fourteen children.

The Rev. George Lubbers became their first undershepherd. When he and his family came, they moved into a parsonage that had just been bought for $1,400.00.

The early years saw Randolph still “sharing” the Congregational Church. However in 1951, they purchased property with a building on it. It was just a basement, but it was their own basement and services could be held mornings and afternoons.

Another dream began as the church grew, and there were more and more children: the dream of their own school. A school society was started and later disbanded. But the dream still lived. In 1981 a second school society was begun. But the money needed not only for the building of a new school, but also the day-to-day running of that school, was just not available at that time. Prayers were continually being offered that God would show the way and provide the means.

Randolph now numbers 28 families and 5 individuals with a total of 69 children, including 9 college students, 16 high schoolers, 32 kindergarteners through 8th graders, and 12 preschoolers. Randolph is a small farming community and there are seven farm families in the church. There are also an equal number of men who are general laborers, working for a local seed company, driving a feed truck, or working in local factories. There are six in the construction field, three who own service businesses, a husband and wife who teach, and an electrician.

Randolph has lost members of late to sister churches in the denomination because of the economy. There are more and better jobs in the bigger cities. But God continues with Randolph. His truth is proclaimed from the pulpit each Sunday, strengthening, encouraging, and blessing those in Randolph as His beloved flock.

“Daily Devotions” written by Rev. John Heys are now ready. These one-page-a-day Bible studies are the result of a request that came from members of our sister churches in Singapore. These one-page jewels, one for every day of the year, cover many subjects of interest for every child of God, such as hope, praise, prayer, confessions, forgiveness, joy, and many more. They are all based on the Psalms.

They are printed in sets of twelve small, handy, monthly booklets that are available now from your local Protestant Reformed Church. Soon there will be some bound in paperback book form covering one whole year. These books are the project of the Hudsonville Prot. Ref. Church’s Men’s Society. If you haven’t gotten your own personal copy yet, be sure you do so soon. From all appearances it looks like a worthwhile addition to anyone’s library.

The Sunday School of the Trinity Prot. Ref. Church in Houston, TX invited the children and the parents of the congregation to the annual fall outing, Saturday, November 14. They were all planning to spend the day at the Houston Zoo.

The Council of First Church in Grand Rapids has decided to overture Synod to make the Reformed Witness Hour a denominational work. Today and through its more than 45 years of broadcasting, the Reformed Witness Hour has been a First Church project. Other of our churches contribute support and/or sponsor stations, but the R.W.H. has never had denominational backing as a whole. The Radio Committee also reported that currently denominational (through Synod) spending equals about ten cents per family per week. And as little as $1.00 per week would generate about $65,000 to give a larger working balance for expanding the radio witness. 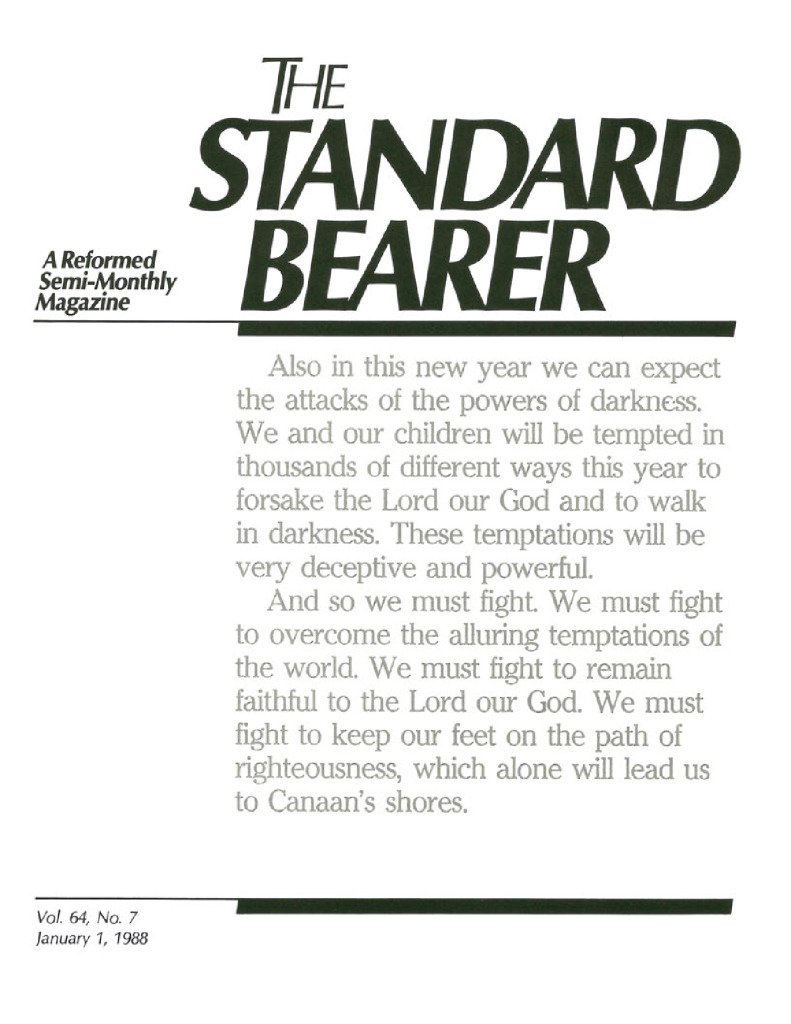