All of the main streets in the South Holland-Oak Lawn area led, to our Oak Lawn church Tuesday evening, March 17. Rev. H. Hoeksema lectured that evening on, “The Virgin Birth, and the Natures of Christ” to a capacity crowd, including the delegates to Classis West, overflowing into an adjoining room. The speaker developed the truth that our Mediator was in one Person both very God and real righteous man; that, the human and Divine natures were united in the Person of the Son of God, who, by the power of His Godhead sustained the human nature in order to bear the burden of the wrath of God that He might obtain for us righteousness and life.

Rev. VandenBerg has received and is considering the call extended to him by the congregation of Redlands.

Adams St. School rendered their Easter program March 19 at First Church. The theme, “From Death To Life” was carried out by narration, poems and music. By following the life of Israel from Egypt to Canaan the audience traveled with God’s Church to its Eternal Rest.

The March Beacon Lights’ Hymn sing was held at the Southwest, Church despite the “worst blizzard of the year” which raged over the countryside. The weather surely kept many of the out-of-towners away, but those attending enjoyed singing the Easter music from Psalter and song sheets.

Holland’s Men’s Society met in joint meeting at First Church, March 15. The after recess program consisted of a paper on “Christian Giving” by J. H. Kortering. He very ably developed the theme that Christian giving is the outward manifestation of an inner reality: Love toward God, as prefigured in the O.T. sacrifices and offerings, and in the N.T. Church under the injunction, “give as the Lord has prospered us.” A warm discussion followed? including the “pros” and “cons” of the modern budget envelope method of giving.

Oaklawn welcomed serviceman Robert Haak back to their congregational life, having been separated from this form of the communion of saints for the past two years. Rev. VandenBerg calls the attention of his people to a significant fact of current church history as it is developing in the Passaic Classis of the Reformed Church in America. He offers a brochure written by the consistory of the Sixth Ref. Church of Paterson, N.J., regarding, the licensure of a certain candidate for the ministry who holds to, heretical doctrines. Oak Lawn was host to South Holland’s Men’s Society, March 2, and the Rev. H.C. Hoeksema gave a talk on “Science and Scripture on the Age of the World.”

South Holland granted a transfer of the membership of Eileen VanBaren to First Church, Grand Rapids. Further, the second Tuesday evening catechism class assignment for March 17 was a report on the lecture mentioned in our first paragraph. And, new ushering arrangements have been completed; several young men will take turns ushering, the first two being Henry and Adrian Lenting.

Southeast Mr. and Mrs. Society is very busy building up their “Organ Fund” with rummage sales and the sale of sacred records. Further, membership papers were received from the Cascade Chr. Ref. Church of Mrs. James Veldman, nee Gracia Schreur.

Do you agree with E.E. Opdyke that,

Gossip is the most deadly germ.

It has neither legs nor wings.

It is composed entirely of tales

And most of them have stings.

The author evidently experienced in his life the stark truth of Proverbs 18:8, “The words of a talebearer are as wounds, and they go down into the innermost parts of the belly.”

Correction: The piano Oak Lawn is purchasing is for society use and not for church services, as reported last time. The congregational singing has been accompanied by an Electronic Wurlitzer organ for the past six years. 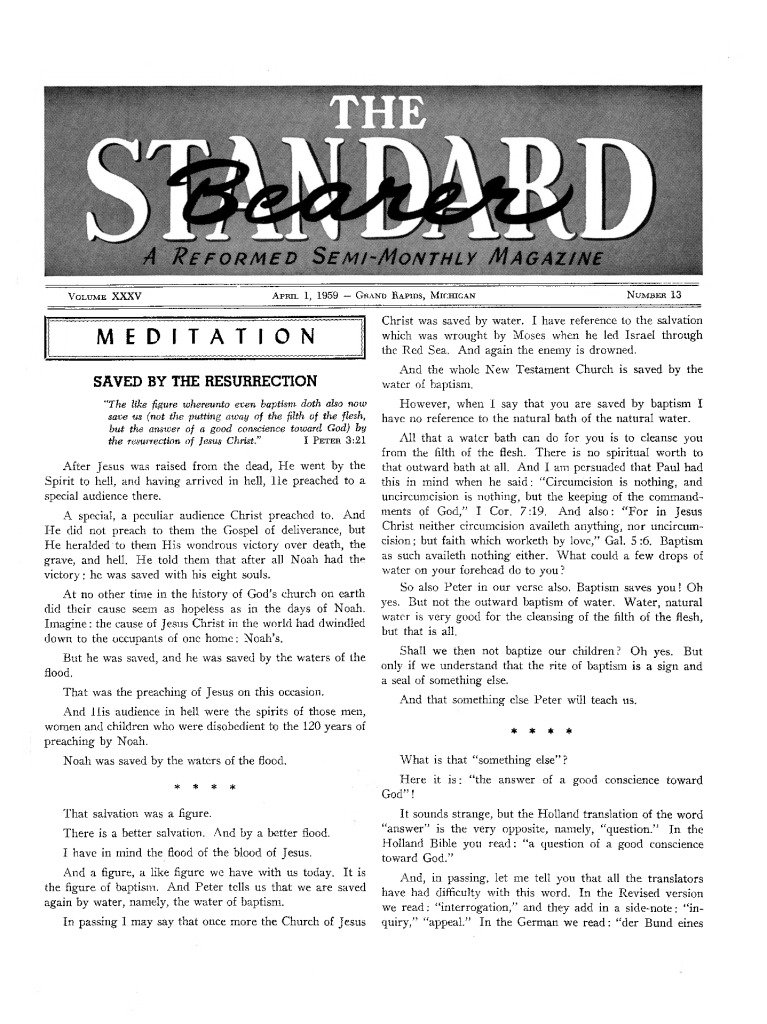