The Radio Committee of First Church is looking forward. Forward, that is, to February 12, when they intend to give a program; theme: “Progress Report of 1959.” If you live in the Grand Rapids area, be sure to circle that date when you hang up your new calendar.

The Hope, Holland and Hudsonville bulletins always seem to have announcements regarding the Hope School. It surely has a large place in the hearts of the members of those churches, and well may they be proud of their school. The children rendered a Christmas program in First Church Thursday evening, Dec. 18. It was a marvelous program, from the rhythm band—with its clashing cymbals—to the Hallelujah Chorus. Notwithstanding the defect of the piano by going slightly out of tune during some of the solo work, the audience thoroughly enjoyed the whole program. The theme, “The Lord is My Shepherd” was carried through the entire evening by speeches, songs and chalk artists. It surely is heart-warming, in the midst of a world-conforming “Christmas Rush,” to be called to celebrate Christmas with our children from Sunday School and day school.

The ancient practice of Christmas caroling was revived in Grand Rapids this year by at least two groups. The young people from Creston joined those of First Church to sing carols at the Holland Home, and at the home of Rev. and Mrs. Ophoff. After the caroling they met at First Church for a Christmas party.

The other group comprised the choir from Adams St. School, all forty-seven of them, with Mr. and Mrs. Fred Hanko, Miss Dykstra and, of course, Miss Kuiper singing with them. They sang at the homes of several shut-ins, slipping and sliding down slippery front steps. That couldn’t happen in Redlands!

Both the servicemen of First Church are in the Air Force, John Bult, who was home on a Christmas furlough; and Donald Ezinga, who was recently inducted.

Doon has reduced the furnace debt from $1,500.00 to $512.00 through a drive and other collections. Doon’s Men’s Society will start the new year by studying the Book of Revelation, having finished the Book of Romans.

The new address of Southeast’s pastor is 1543 Cambridge, S.E. The Rev. Veldman’s family moved to the new parsonage Wednesday, Dec. 17. To meet the requirements of the City tax laws, the new house had to be occupied in December in order to benefit from the tax-free status of church-owned buildings.

Adams St. ninth graders worked hard getting ready for, and serving a spaghetti supper on the evening of December 12. Dishing out spaghetti, pouring second cups of coffee and serving ice cream and desserts kept them busy—with a little assist from their parents. It is reported that some six hundred mouths were fed—that took quite a mountain of spaghetti!

Mr. Kortering of Holland’s Men’s Society gave a paper on “The Salvation of Infants” at the joint meeting held at Southwest Church.

Holland’s people, like those of Hudsonville, must share transportation costs, besides tuition fees, to furnish Protestant Reformed education for their children at Hope School. Good things are usually expensive, but our people do not complain over this burden; Oak Lawn and South Holland also testify to that fact with their continued efforts to build a school of their own.

No doubt, but you have already read the decision, handed down by the Superior Court of Grand Rapids, as it is found on the Editorial page of this issue.

Hudsonville heard the public Confession of Faith of twelve of their young people Sunday, Dec. 14. Also from Hudsonville: Donald Dykstra, Jr. has completed his service for Uncle Sam, and John Kamp’s induction was postponed for a while.

Rev. Mulder was unable to occupy Kalamazoo’s pulpit Sunday, Dec. 7, because of a cold. Student Kortering was called in to break the Bread of Life in his stead.

Rev. Emanuel reminded the people of Randolph that the Reformed Witness Hour is broadcast at 9 a. m. during the winter months when the station signs off at 4 p. m. Randolph’s two servicemen are John and Jim DeVries.

Another situation impossible to arise in Redlands: The Men’s Society meeting of South Holland scheduled for Dec. 8 was frozen out!

Hope School P.T.A. meeting of Dec. 12 scheduled a round table discussion on “Manual Training.” The ninth graders were on hand to sell Rev. Hoeksema’s books and subscription to Beacon Lights.

From Lynden we learn that Mrs. Harbach was saddened by the death of her mother, who passed away Friday, Dec. 5. Their bulletin expressed this prayer: “May the Lord, who is our only comfort in life and in death, sustain her and the bereaved relatives.”

Now that we have exchanged gifts on Christmas eve; wished one another a blessed Christmas; discarded the tree and tinsel; and realize that Christmas is all “over”—let us remember: that because Jesus came to be born in our flesh we have borne the image of the earthy and shall also bear the image of the heavenly; that this mortal shall put on immortality. Therefore, let our watchword for the year 1959 be: “Be ye steadfast, unmovable, always abounding in the work of the Lord!” 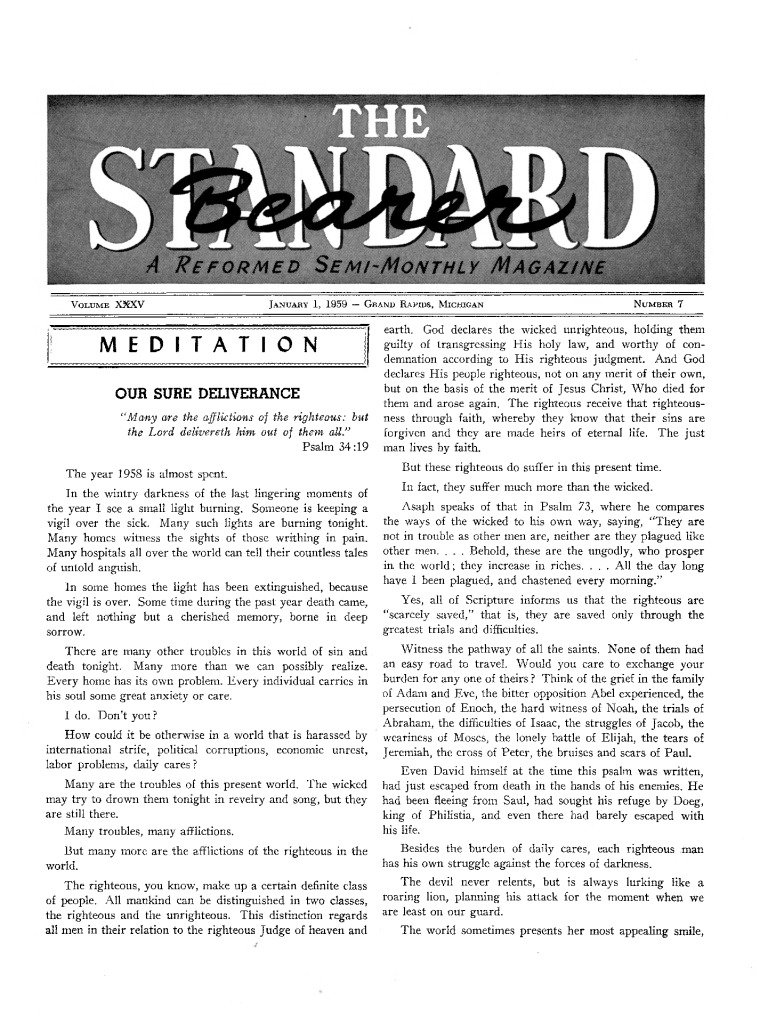